Dozens of people were injured when the police, armed with pump-action shotguns, fired pellets and teargas shells to disperse the Muharram procession on Saturday.

Both of 16-year-old Tanveer's eyes have been damaged. Photo: Mudasir Ahmad

Srinagar: The thought of losing his eyesight kept Tanveer awake through the night.

“Have the doctors arrived?” the 16-year-old boy repeatedly asked his father, Nazir Ahmad.

This morning, as a surgeon carefully removed the padding from Tanveer’s bruised eyes, his father ran out to the hospital corridor and cried.

“His right eye is completely damaged. There are chances of recovery of some vision in his left eye,” the surgeon told Ahmad, after examining his son’s eyes and going through the CT scan report. 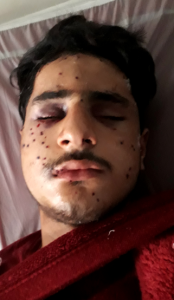 A Class 10 student, Tanveer is the latest youth to fall victim to metallic pellets, also known as bird shots, in Kashmir. On Saturday, the young boy was part of a Muharram procession in Khomeini Chowk, on the outskirts of Srinagar when the police, armed with pump-action shotguns, fired pellets and teargas shells to disperse the procession, said Ahmad.

A doctor told The Wire that four pellets have ruptured Tanveer’s right eye, damaging his optic nerve, while one pellet has made a hole in his left eye.

“We will take a call whether to operate on him now or wait for the wounds to heal first,” the doctor said.

Lying on the bed inside the Ward No. 7 of Srinagar’s Shri Maharaja Hari Singh Hospital, Tanveer pleaded with his uncle to tell him “the truth” about the condition of his eyes.

“I want to know whether I will be able to see again,” a soft-spoken Tanveer said, his eyes closed.

Then, he remembered his upcoming exams. “I have to prepare for my exams also,” he said, unaware that his life, like hundreds of young pellet victims into Kashmir, is going to be tough struggle from here on out.

In 2016, when hundreds of youth lost their vision, partially or completely, to lead pellets during the summer uprising, Ahmad had sent Tanveer to Aligarh for studies. He returned home in March this year when the COVID-19 pandemic forced the closure of all educational institutions.

”He is so young, like a blossoming flower. Even the thought of him not being able to see again is killing me from inside,” said Ahmad, a shopkeeper. “I have seen how these pellet victims struggle endlessly.”

While Ahmad was talking about his son’s passion to pursue higher studies at Aligarh Muslim University, Tanveer interrupted him. “Please switch off this light. It’s hurting, I don’t like it,” said Tanveer, in visbile pain.

‘They didn’t spare even children’

Tanveer’s uncle said the Muharram procession was going on peacefully and was to culminate 1 km ahead when the police swung into action and used force on the procession. Several videos which have gone viral on social media show the mourners running for cover amid teargas shelling. In one video, a teargas shell explodes metres away from a group of mourners.

“They didn’t even spare women and children as people ran into a nearby locality to save themselves,” said Tanveer’s uncle.

According to him, more than 40 mourners, including young boys, have been injured in the police action. Most of them were first taken to nearby Imam Hussain hospital for the treatment wherefrom they were referred to SMHS hospital.

Medical Superintendent, SMHS hospital, Dr Nazir Choudhary said eight persons with pellet injuries were admitted to the hospital till Saturday evening. “There were more cases reported late. We are collecting the details,” he said.

An administrator at Imam Hussain hospital told the Kashmir Walla, a local news portal, that they received 40 mourners with pellet injuries who were later referred to SMHS and Bone & Joint hospitals.

Senior Superintendent of Police, Srinagar Haseeb Mughal, refused to speak on what led to the police action on the mourners. “I’m busy right now, I will not be able to speak,” he said. The Inspector General of Police, Kashmir, Vijay Kumar did not respond to repeated calls and text messages for his comment.

A woman, Khatija, who was attending to her nephew, Suhail Abbas, another pellet victim admitted in the SMHS hospital, said the police had initially allowed the procession. “And as the procession was going on, they used force, resulting in so many injuries,” she said.

Also read: Pellet Guns in Kashmir: The Lethal Use of “Non-Lethal” Weapons

During the Muharram procession, Shia Muslims observe the martyrdom of Prophet Muhammad’s grandson Imam Hussain from more than 1,400 years ago. For the past several days, authorities in Kashmir have imposed strict restriction in Shia majority areas of Srinagar and adjoining Budgam to disallow the mourners from taking out the processions – a practice that was banned by the government in 1989 when militancy erupted in the Valley.

“Yei tchu zulum (this is tyranny). This was not any protest and there were no slogans. They were out to mourn for Imam Hussain. Now, the police are firing pellets on even religious processions,” said Khatija. She pointed towards her nephew: “Look what they have done to him.”

A Class 12 student, Abbas has four pellets stuck in his right eye. He was operated upon late on Saturday night and is scheduled to undergo another surgery in 15 days, said his father.

“I’m not able to see with my injured eye. It pains if I focus with this eye even for a minute,” he said.

Both Tanveer and Abbas are neighbours in Bemina, a locality in the city. More than himself, Abbas was worried about young Tanveer. “He is so young. What will he do if the condition of his eyes doesn’t improve?” he asked his aunt.

“We are an oppressed people,” she replied. “He went out for Hussaniyat. Allah will take care of him.”