'Starvation Scarier Than the Virus': A Young Mortuary Worker Speaks on Life During a Health Crisis

Out of work, his mother sick, his family hungry, a 19-year-old does an essential, but high-risk job that few people appreciate. 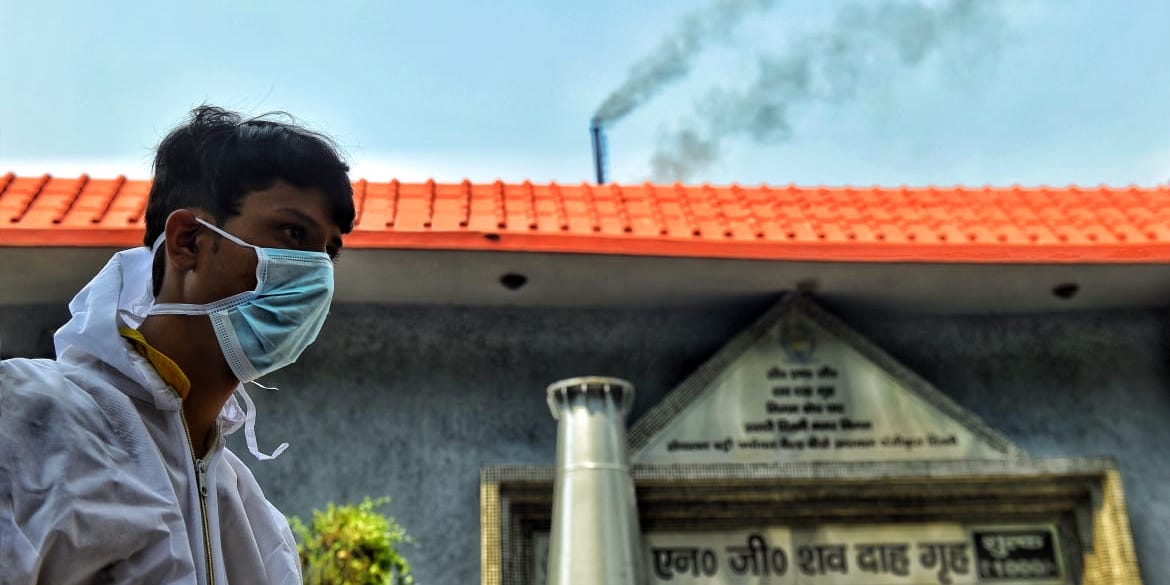 New Delhi: Until four months ago, 19-year-old Chand Mohammad, a student of Class IX at a government school in Delhi’s Kanti Nagar, hurried to finish his classes so he could get to the shop where he worked on time.

The small shop in the crowded Gandhinagar Market was about 800 square feet in size. The space was more cramped than it should have been, given that Chand worked with seven other assistants. But he needed the job. Chand has a family of seven to care for.

He is also an ambitious young man. His goal at that time was to save enough money to pay for coaching classes for his class X board examinations next year. His aim was to score enough marks to be able to take a subject combination of physics, chemistry and biology in higher secondary school. The overarching idea was to become a doctor some day.

Soon after his exams ended in February, Hanifa, his mother, was diagnosed with a stone in her gall bladder as well as hyperthyroidism. While medicines would do for hyperthyroidism, the stone required surgery. Chand shifted his goalposts. He now wanted to make sure his mother got her medicines and eventually the surgery she required.

Chand took Hanifa to the government-run LNJP hospital. By then it was March and the nationwide lockdown had been announced in India due to the novel coronavirus. Hospitals were reluctant to treat out-patients. They refused to admit Hanifa too, delaying her operation indefinitely and forcing her to rely on costly medicines to kill the pain.

Soon after this came another jolt. Chand Mohammad lost his job. The shop was shut for the lockdown; his employer did not answer any of his workers’ phone calls.

Chand’s father, Mohammad Momin, a daily wage worker, was too old and weak to work. His older brother, Sakib Mohammad, managed to work but his pay was meagre and sporadic, no substitute for Chand’s regular income of Rs 7,000 per month.

His many trips to the shop yielded nothing. The shop remained shut.

“Not only did I lose my job, I also wasn’t paid for the last month that I had worked there. I felt so helpless,” he said.

Watch | How Essential Workers Are Braving COVID-19, Ensuring Supplies and Doing Their Jobs

As with a large section of informal workers, Chand’s family had no savings to see them through the lockdown. With no income in sight, they reduced their food intake.

For three months, the family of seven ate only twice a day, often seeking help from others. They struggled to pay the rent for their small two-room flat in Delhi’s Kanti Nagar area.

Chand, however, had been secretly looking for a job, any job, so he could sustain his household.

‘It’s frightening, but it pays well’

In June, a friend who was aware of Chand’s financial situation, told him about a well-paying job.

It involved “taking care” of the victims of COVID-19 at LNJP Hospital, the same hospital where his mother had been treated. He was supposed to carefully transfer bodies from the mortuary to the hospital van and then transport them to the burial ground or crematorium as necessary. He would be paid a “handsome” salary of Rs 17,000 per month, more than double the salary he had earned at the shop.

It was an irresistible opportunity, with the potential to solve many of his headaches. But he had a dilemma: managing a mortuary filled with the dead bodies of COVID-19 patients carried the risk of him bringing the infection home. And his mother was ill.

“I took God’s name, and went for it,” Chand said. “Iss kaam se darr toh lag raha tha, magar bhook se zyada lagta hai. Aur phir Ammi ki dawaiyein bhi toh leni hain na (This job did scare me, but then starvation is scarier. And I had to buy medicine for my mother too).”

But for at least a week, Chand Mohammad didn’t tell his parents where he really worked. “I told them I was working as a guard in a hospital,” he said.

He couldn’t lie for long, however and finally told his mother what he really did, expecting her to be angry. Instead, she was upset and sad.

“She started crying. I had a hard time explaining to her how we wear PPE kits to avoid infection and how the job pays so well,” Chand said. “She cursed our poverty and said, had we not been poor, my son would never have to risk himself like this.”

But Chand has too many responsibilities to worry much about risk. Aside from providing food for the family and medicine for his mother, he needs to make sure his three sisters, Rafiya, Muskan and Sadaf, who are all in school, remain in school. “I want to ensure that all my sisters are educated,” he said. “Obviously I am scared the virus might infect me. But what other option doI have?”

Social distance in a two-room flat

Though this is not his first job, Chand is the youngest among his colleagues at the LNJP Hospital. His working day usually begins at about 2 pm, when he marks his attendance at the hospital and waits for dead bodies to arrive.

“On a daily basis, at least five COVID-19 patients come to the mortuary, sometimes more,” he said.

He wears a fresh PPE kit every day and discards it before going home, but he knows it doesn’t guarantee his safety. Since that is a frightening thought to return home with, he takes as many precautions as possible. When he leaves the hospital, he obsessively washes his hands several times. Before entering his house, he sanitises his hands, face and every other exposed part of his body.

Because of what he does for a living, he sleeps alone in one of the two rooms of his residence; the others all sleep in the other room. He feels guilty about monopolising so much space, eats separately and keeps away from the family, especially his mother, as much as possible.

“It’s difficult, but when I think about the day I will get my first salary – July 11 – and how it will help me buy a whole month’s medicine for my mother and rations for the house, it seems worth it,” Chand said.

If there’s anything left from his salary after he buys these necessities, he will give it to his ammi, his mother.

Handling dead bodies all day, Chand Mohammad is gripped by questions about life and death. He ponders these questions at night, finding it hard to sleep. But he must fall asleep as soon as he can – the hospital often summons him even before his shift begins. 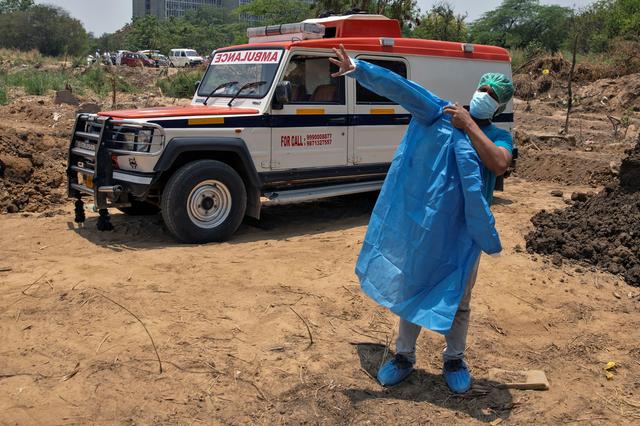 An ambulance driver changes his personal protective equipment (PPE) as he prepares to take out bodies of people who died due to the coronavirus disease Photo: Reuters/Danish Siddiqui

“I am scared to touch dead bodies, transport them, pick them up… but when I think about my family’s condition during the lockdown and how this will ease our problems, it seems like God suddenly makes me strong,” he said.

In Photos: Of Cremations, Hazmat Suits and ‘Respectful Funerals’

‘Practicing to be a doctor’

Chand Mohammad’s school is temporarily closed because of the pandemic. “My teachers have never complained about me. I was always a good student,” he smiles.

Despite his grim job, he is as exuberant as any young person. He wants to know, for instance, how the media works. “I want to be seen on TV for my work,” he jokes.

He is clear about one thing, however: “Becoming a doctor is my priority. I want to save people.” His words have the conviction of the underdog.

His daily routine, he feels, will help him one day when he is a doctor. In his PPE kit, he relates to the difficulties faced by doctors, nurses and other health care workers whose efforts are not often properly acknowledged.

He job isn’t venerated either, he knows. “But somebody has to do these difficult jobs. If it wasn’t me, it would be somebody else,” he said, wanting people to appreciate the risks he and his colleagues take. “Of course, wearing PPE the whole day is very uncomfortable. It makes you feel sweaty and nauseated.  But we are also doing something essential. Aren’t we?”

He often returns to his school, just to look at it. “I hope I can save enough to pay my fee. I will also work hard to get good marks and qualify for the medical entrance exam,” he said, reminding himself of his dream.