The Myanmar military said it had shot and killed an unspecified number of "terrorists with weapons" from the opposition armed forces in the village, state media said. 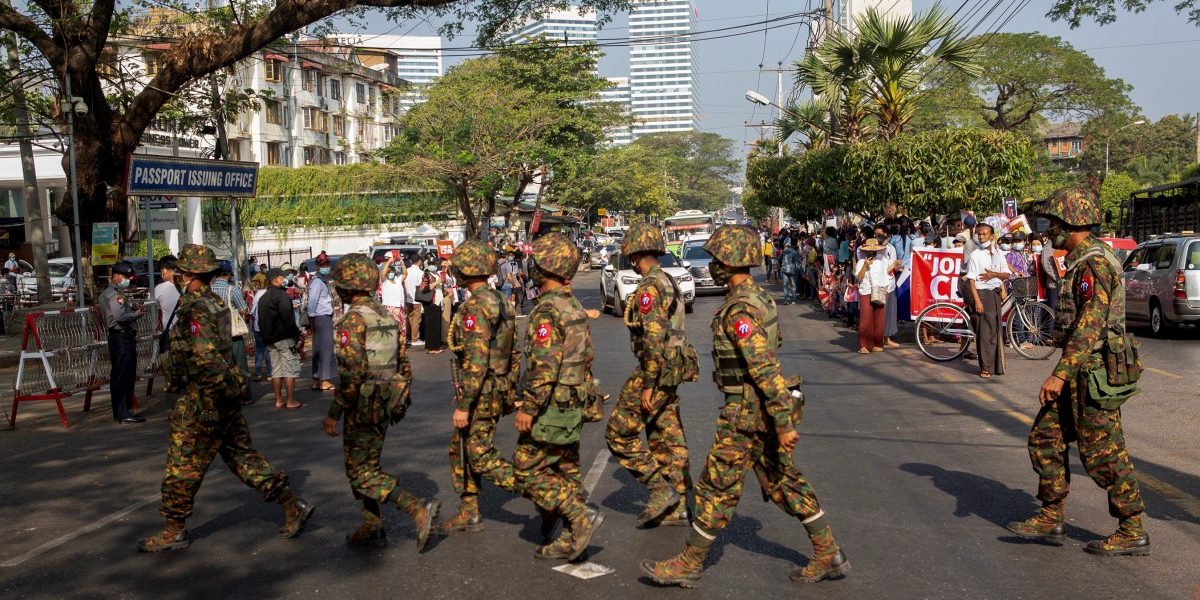 FILE PHOTO: Soldiers cross a street as people gather to protest against the military coup, in Yangon, Myanmar, February 15, 2021. REUTERS/Stringer

More than 30 people, including women and children, were killed and their bodies burnt in Myanmar‘s conflict-torn Kayah state on Friday, according to a local resident, media reports and a local human rights group.

Karenni Human Rights Group said they found the burnt bodies of internally displaced people, including elders, women and children killed by the military that rules Myanmar, near Mo So village of Hpruso town on Saturday.

“We strongly denounce the inhumane and brutal killing which violates human rights,” the group said in a Facebook post.

The Myanmar military said it had shot and killed an unspecified number of “terrorists with weapons” from the opposition armed forces in the village, state media said. The people were in seven vehicles and did not stop for the military, it said.

The Myanmar military could not immediately be reached for comment.

Photos shared by the human rights group and local media showed the charred remains of bodies on burnt-out truckbeds.

The Karenni National Defence Force, one of the largest of several civilian militias opposing the junta that led a February 1 coup, said the dead were not their members but civilians seeking refuge from the conflict.

“We were so shocked at seeing that all the dead bodies were different sizes, including children, women and old people,” a commander from group told Reuters, asking not to be named.

A villager who asked not to be named for security reasons said he was aware of the fire on Friday night but could not go to the scene as there was shooting.

“I went to see this morning. I saw dead bodies that had been burnt, and also the clothes of children and women spread around,” he told Reuters by phone.

Meanwhile fighting in another part of the country, near the Thai border where the Myanmar military continues to clash with a rebel group, resulted in a wayward rocket-propelled grenade damaging a house on the Thailand side of the border with no deaths or injuries, Thai authorities said on Saturday.

The Myanmar military carried out airstrikes earlier on an area controlled by the Karen National Union (KNU) near the border in an escalation of fighting that flared up last week and has since sent thousands fleeing into Thailand.

Myanmar has been in turmoil since the military overthrew the elected government of Nobel Prize laureate Aung San Suu Kyi almost 11 months ago, claiming fraud in a November election that her party had won. International observers have said the ballot was fair.

Civilians enraged by the coup and subsequent crackdown on protesters have been taking up arms. Many local resistance forces have sprung up across the country.

The military has outlawed many opponents, labelling them traitors or terrorists, including a self-proclaimed National Unity Government that seeks to lobby the international community and prevent the junta from consolidating power.