One of the workers said the head of the steel drum was bearable compared to the hunger of the past few weeks. 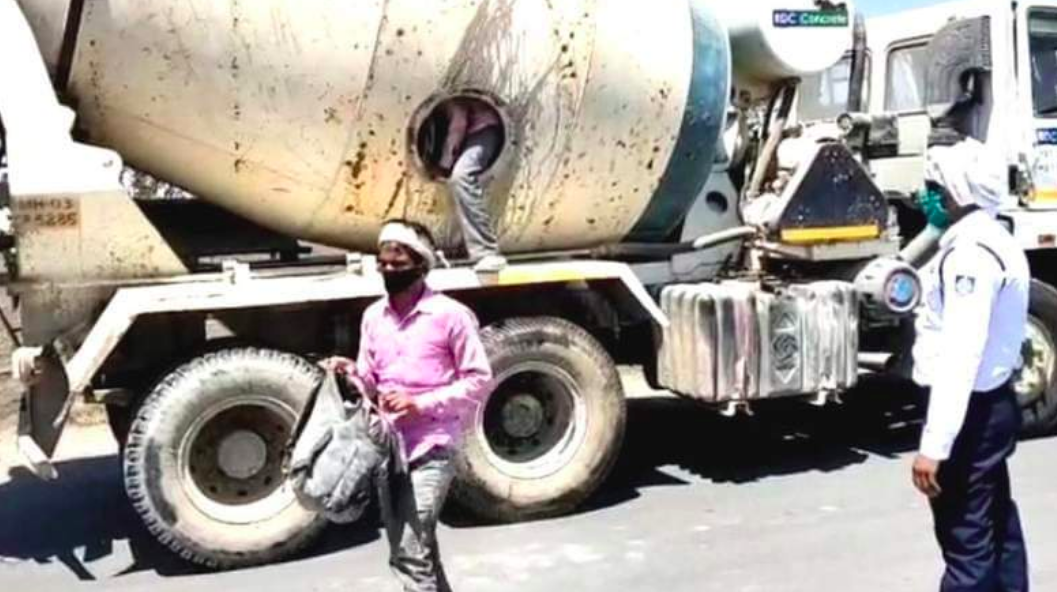 The workers make their way out of the cement mixer. Photo: Twitter

New Delhi: Stranded without work and money in Mumbai, four drivers took on a gruelling journey in desperation to reach their homes. On May 1 – International Workers’ Day – the migrant drivers boarded a concrete mixer truck and hid in its steel drum as they began their 1,380 km ride back home in Uttar Pradesh.

The workers told The Hindu that they had not received their wages for the last three months, and were left with no other option.

On the way, they had picked up 14 others, most of whom were walking back to Gorakhpur.

However, as the truck passed the outskirts of Indore, a police official saw a head popping out of the opening in the steel drum. He stopped the vehicle and found all the workers inside the drum. Madhya Pradesh police has now arrested the truck driver for flouting the lockdown, and sent all others to a quarantine centre, where they were screened and given some food.

Sunil Yadav of the Sanwer police station said that the workers did not see the lockdown ending anytime soon, and therefore, had boarded the mixer truck. “They said it would be lifted on April 14, but it has not ended.” the police official told The Hindu, adding that they had lost all hope of the lockdown ending in the immediate future.

At the quarantine centre, one of the workers Manoj Yadav, who was supposed to get down at Lucknow to embark on yet another 200 km-journey to his native Prayagraj on foot, said, “The heat inside (the drum) was more bearable than the hunger.”

He said that, on May 1, the truck driver stealthily drove his vehicle to one of the highways in Mumbai where he picked up his three co-workers at the concrete-mixing factory.

“We had planned to hand over the truck to the police in Lucknow,” said Manoj, who is the sole earner in his family of seven. He said that they had survived only on biscuits for the last 12 days, and the local panchayat gave them some food occasionally. “I had spent my last penny a month ago,” he said. He had hoped that if he could reach his village, he could sustain a livelihood by tilling whatever little farming land he had.

Manoj said his wife needed an appendicitis surgery. The freeze in his salary, around Rs 22,000, had driven him sheere despondency.  “I do not know why our salary was withheld,” he said, adding that he was forced to smuggle himself out of Mumbai.

“There was enough space for everyone inside the mixer to sleep. There was no problem breathing,” he said, uncertain about when he will finally reach his home.

This is not the first instance of a gruelling journey made by workers amidst the lockdown. Authorities too have been accused of similar cruelty.

The Wire‘s Sukanya Shantha has reported on how in Vapi taluka of Gujarat’s border district Valsad, around 120 labourers — women and children included — had to undergo a gruesome ordeal after they were forcibly packed into an enclosed container truck and taken out of the state limits in early April.