From tonight onwards, certain activities in the agricultural sector and rural economy would be permitted.  However, no relaxation would be given to those areas which have been declared red zones. 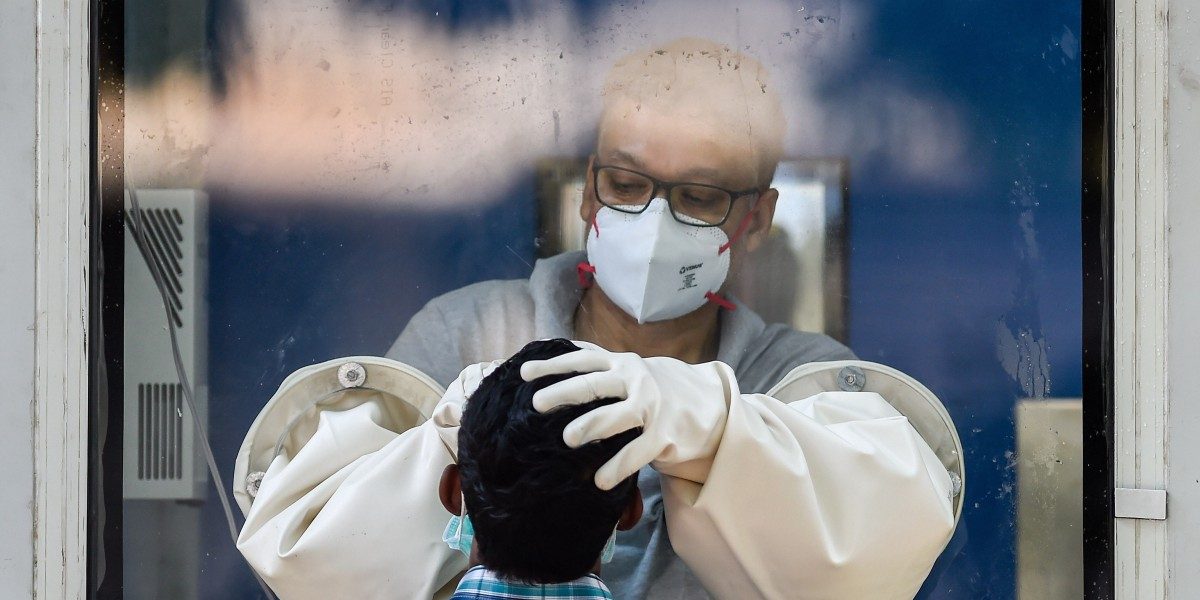 A medic collects a swab sample of a man from a new testing cabin at Podar hospital in Worli in Mumbai, April 19, 2020. Photo: PTI/Kunal Patil

New Delhi: The Ministry of Home Affairs (MHA) has readied a standard operating procedure (SOP) to be followed – from April 20 onwards – for partial lifting of the nationwide lockdown – with a stress on augmenting rural economy, and opening those industrial units which don’t come within the COVID-19 affected hotspots and containment areas.

The MHA representative, addressing the daily press briefing at New Delhi to provide updates on the government’s action taken and preparedness to tackle COVID-19, said Union home minister Amit Shah held a meeting with ministry officials, based on which various measures are being taken including readying an SOP for migrant labourers.

As per the SOP issued on April 19, migrant labourers who have been staying in various camps in towns and cities can be facilitated to reach those industrial units which have been given permission to operate within certain restrictions for their employment. She said even in such circumstances, restrictions such as social distancing must be strictly followed. Preference would be given to those units where there is a facility to provide lodging to the labourers.

The official said as per the instructions of the minister, and after discussion with various states on different points, that efforts are being made to keep the situation under control. Since the fight against the pandemic is still on, the restrictions and directions around the lockdown must still be followed.

However, in areas which are outside of the containment areas and hotspots, certain relaxations have been given. Relaxation of rules have been given in rural areas to augment the economy. So the district heads, along with local traders and units will cooperate to move labourers within the states. “This will not only help to bring back on track the economy but also employment to the labourers,” she said.

She said the minister said in the meeting that efforts must be on to open the agricultural sector and work listed under the MNREGA scheme in the rural areas.

Lav Agarwal, joint secretary at the Ministry of Health and Family Welfare (MoHFW), said following what Prime Minister Narendra Modi said on April 14 that partial lifting of the lockdown will take place from April 20 onwards, from tonight onwards, certain activities in the agricultural sector and rural economy would be permitted. However, no relaxation would be given to those areas which have been declared red zones.

He said the red zone areas are on a rolling basis, which meant new areas could also become red zones if there are reported cases from those areas. Therefore, following the strict measures taken by the respective states and the guidelines issued by the central government would still be necessary.

The ministry official said, “In the last 24 hours, 27 deaths have been reported, taking the total death toll to 507.”

He said, as of April 19, 54 districts across 23 states and union territories have not reported a single case in the last 14 days. “Ten new districts have been included since yesterday. They are: Gaya and Saran in Bihar, Bareilly in Uttar Pradesh,  Fatehgarh Sahib and Roopnagar in Punjab, Bhiwani , Hisar and Fatehabad in Haryana, Cachar and Lakhimpur in Assam.”