Both leaders had been put under house arrest on Sunday. New Delhi: Former chief minister and Peoples Democratic Party leader Mehbooba Mufti and National Conference leader Omar Abdullah were both detained late on Monday, barely hours after Union home minister Amit Shah announced in the Rajya Sabha that Article 370 which gave Jammu and Kashmir its special status, will be done away with.

Mufti is understood to have been taken to Hari Niwas, a former torture centre on Gupkar Road in Srinagar, which now functions as a guest house. A high-profile detainment, this is one of the first steps taken by law and order enforcement in the region since it was announced that Jammu and Kashmir would be broken up into two Union Territories, to be ruled directly by the Centre. 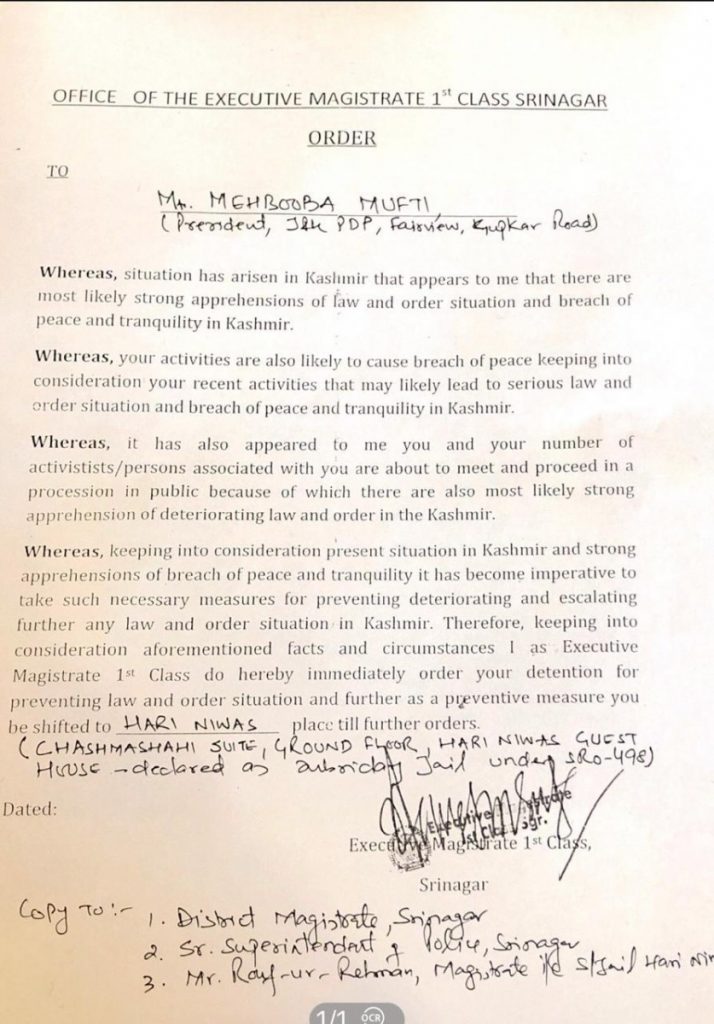 The Wire is in possession of Mufti’s detainment order, issued by the Srinagar executive magistrate. “It has…appeared to me you and your number of activists/persons associated with you are about to meet and proceed in a procession in public because of which there are also most likely strong apprehension of deteriorating law and order in the Kashmir,” the order reads.

The order further calls the detention a “preventive measure”. The reasons for Abdullah’s detainment are not immediately clear.

Mufti, who led the PDP into an ultimately unsuccessful coalition alliance with the BJP, has been vocal about her distrust with the latter’s government at the Centre when it comes to matters relating to Jammu and Kashmir. In the escalation of confusion that marked the 24 hours that led up to the Rajya Sabha session on Monday, Mufti and Abdullah had been kept under house arrest.

The confusion over the law and order situation in Jammu and Kashmir has remained, even though internet services which were snapped on Sunday appear to have been intermittently restored.

Mufti is one of the few who had managed to get her voice across while the Article 370 debate was on in the Rajya Sabha. On Twitter, she was thoroughly critical of the role India was playing in subjugating Kashmiris with these legislations and had called August 5 “one of the darkest days” of Indian democracy.

Tweeting consistently amidst a Section 144 clamp down, Mufti thanked the MPs who spoke for the necessity to safeguard Kashmir’s special status in the parliament. One of her tweets noted that India had failed Kashmir.

The abrogation of Article 370 hasn’t just made accession null & void but also reduces India to an occupation force in Jammu and Kashmir. https://t.co/PS6JxYhSaI

Today the people of Jammu & Kashmir who reposed their faith in institutions of India like parliament & Supreme Court feel defeated & betrayed. By dismembering the state & fraudulently taking away what is rightfully & legally ours, they have further complicated the Kashmir dispute

The overwhelming mandate that Modi ji got had given us hope that like a statesman he too would tread the path taken by Vajpayee ji & reach out to people of J&K. What an utter betrayal of trust.

Earlier in the day, two PDP members, Mir Fayaz and Nazir Ahmed Laway, were physically removed from the Rajya Sabha after they tore a copy of the constitution, in protest against the government’s decision to scrap Article 370.