Interview | I Hope the Taliban Will Learn From Their Past Mistakes: Massouda Jalal

In this email interview, Jalal speaks of her hopes for and fears about Afghanistan's future as well as what the future holds in store for her and her family.

Dr. Massouda Jalal delivering a speech in Kunduz province of Afghanistan at a conference as part of a series of talks organised by her NGO - Jalal Foundation on a law she helped pass in 2009 - the Law on Elimination of Violence Against Women, Circa 2010. Photo: Jalal Foundation. Born into an educated Kabuli family in the early 1960s during relatively peaceful times, Massouda Jalal went on to study medicine at Kabul Medical University and practiced as a paediatrician, later teaching at her alma mater. Dr. Jalal was forced to resign when the Taliban took control of Afghanistan in 1996.

A fierce defender of women’s rights and a vocal critic of the Taliban, she courted arrest for her activism. She was later released at the intervention of the United Nations, but she never left her country throughout the five years of Taliban rule, choosing instead to intensify her political activism.

Jalal created history by becoming the only woman to run for President of Afghanistan after the fall of the Taliban, first in 2002, again in 2004 and finally in 2019. She ran against Hamid Karzai in 2004 and stood 6th out of 17 candidates. Her creative election campaign was captured in a documentary film Frontrunner. Dr. Jalal went on to become the Minister of Women’s Affairs in Karzai’s government for the next two years.

As the Taliban took over Kabul at breath-taking speed in mid-August, Jalal was forced to flee her country, along with her two children, to an undisclosed location in Europe. But she still has family in Afghanistan and fears for their lives.

In this email correspondence with journalist Kunal Shankar, Dr. Jalal talks of her journey out of Kabul, her assessment of Afghanistan in the second iteration of Taliban rule, what she makes of ISIS-K and her future plans.

I understand you are now in an undisclosed location with two of your children and your evacuation was rather dramatic, wasn’t it? Could you describe to me how you managed to leave the country?

It was very challenging and risky, but I had to take the risk. I was evacuated from Kabul International Airport with the assistance and support of the international military forces.

Are you afraid those who remain in the country who have spoken against the Taliban in the past two decades, like you and your husband, might be targeted? Have you been hearing of any such reappraisals?

Yes, I believe so. Although the Taliban are trying to paint a positive picture to the people of Afghanistan as well as internationally, it is very unrealistic to assume that they have changed. They have broken many promises in the past. So, it is not easy for the people of Afghanistan to trust them easily. They have to show in action that they will respect women and human rights, freedom of the press and the freedom of expression, the rule of law and build an inclusive government.

You left Kabul just a couple weeks ago. You must be in touch with many in your family, the US-led coalition allies, politicians and activists back home. Could you describe how life is right now for them?

People are afraid. They fear for their lives, their well-being and their future. Their future is now very unpredictable. The quest of people to escape by clinging to airplanes at Kabul airport, just a few days ago, shows how afraid they are. It shows that the people of Afghanistan are ready to die, but they do not want to live under Taliban rule.

What do you predict the future of Afghanistan to be under the Taliban now? Do you feel it is a reformed group, as some say, or do you fear a return to the repressive life of the 90s?

Right now, security-wise, it is worse than the late-90s and the future seems dark and hopeless. I can’t see through the darkness what the future will hold for Afghans. I hope no one is left behind and that the Taliban would learn from their past mistakes. I hope they don’t repeat history. I hope they understand that, to govern successfully, they need to share power with all ethnic groups, women and minorities.

I vividly remember watching your election campaign in the mid-2000s as you ran against Hamid Karzai for the Presidency as the only woman candidate. I remember your sense of confidence and jubilation at being able to participate more openly in social life, the sense that a new dawn had arrived in Afghanistan rent the air. It seemed like a new life had only just begun for you as well. How do you feel now when you look back at those days?

It’s very different now. In the early-2000s, when the international community entered Afghanistan with the light of democracy, we were very hopeful about the future of our country and our children. Now, we can no longer see the future as the sky over Kabul is dark. 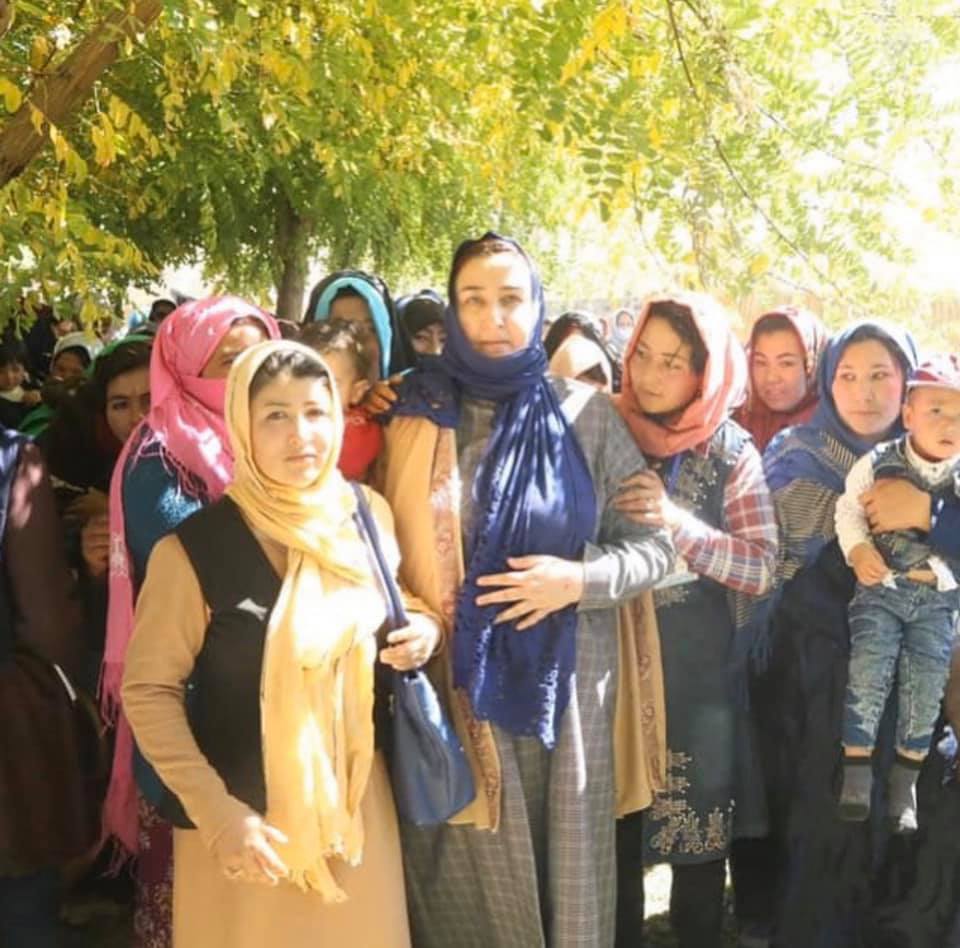 Dr. Massouda Jalal is seen here (centre) with a bunch of women in the historic town of Bamyan in Afghanistan during her 2019 Presidential election campaign. Photo: Jalal Foundation, Dec 2019

You ran for President against Hamid Karzai in 2004 and despite your defeat, you were the Minister for Women’s Affairs in his cabinet. Yet, you maintained a certain kind of political independence. You have worked tirelessly to champion women’s rights in Afghanistan, vociferously speaking against the Taliban, gaining global prominence. And you seemed to have faith that the Americans would not let the country down. Do you feel let down now?

I believe the troops’ withdrawal and the evacuation processes could have been planned and managed much better. I think the international community along with the previous government of Afghanistan could have done better.

Has ISIS-K gained popularity in Afghanistan in the past six years that they have been there?

No. Afghans oppose ISIS-K. They might have increased in numbers because of a lot of other factors but Afghans do not support them and they do not have any popularity in Afghanistan.

Have you sought asylum in any Western country? What are your plans? Would you consider returning to Afghanistan if the Taliban extends an olive branch?

I have not sought asylum yet. My decision will be based on many factors including what the new government looks like in Afghanistan and how many rights and liberties are given to women and minorities.

Could you see yourself returning to active social and political life ever in Afghanistan? How would you continue to participate in Afghan life going forward?

Till this date, I have been independently active and have served my people in different capacities. I will continue to serve my people both in the national and international arenas.

You are a paediatrician. Might you be returning to practice as a doctor in asylum? What are your fears and hopes for your two daughters and your son?

It’s almost three decades since I practiced as a medical doctor as I shifted my career to a life in politics. I hope my kids and all the other Afghan children get the opportunity to get educated and to give back to their motherland.

Kunal Shankar is an independent journalist. He worked on the 90-minute documentary Frontrunner which explores Dr. Massouda Jalal’s life and her 2004 Presidential election campaign.