A previous survey concluded that Tamil Nadu had fewer manual scavengers than it actually did. A new survey to rectify its predecessor's mistakes just concluded. Will it reach a different conclusion? 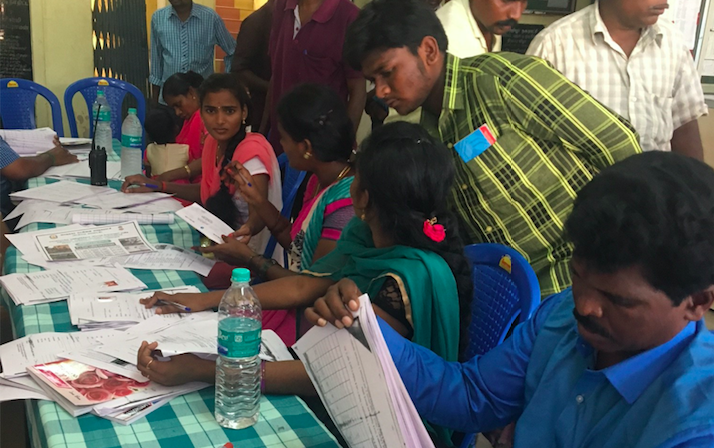 Chennai: It was by accident that K. Selvaraj* discovered that his family was entitled to a compensation of Rs 10 lakh for the deaths of his father-in-law and wife’s cousin when they were cleaning manholes in 2003.

The 33-year-old, a corporation employee who cleans open drains, had come with his workmates to the Chennai Corporation Zone 1 office on April 7 to identify themselves as manual scavengers. He looked apologetic, his head low and hidden behind a cap, when asked if he also cleaned septic tanks.

Following the death of his family members, Selvaraj has been anxious whenever he has had to enter a manhole. “First they fell unconscious, and then they were electrocuted,” he says.

Selvaraj was told about the compensation to which he was entitled by V. Samuel, the Tamil Nadu convenor of the Safai Karamchari Andolan (SKA), an organisation that works to eradicate manual scavenging. Samuel also told him about an ongoing survey to identify manual scavengers being conducted by the National Safai Karamchari Finance and Development Corporation (NSKFDC), a wholly government owned body under the Ministry of Social Justice and Empowerment.

Selvaraj’s story is symptomatic of the failures of the Tamil Nadu government’s programme for identifying and rehabilitating manual scavengers. Selvaraj has been working as a manual scavenger for more than 15 years. Like many others, he remains unaware of the rehabilitation package as described  under the Prohibition of Employment of Manual Scavengers and their Rehabilitation Act, 2013 (MS Act).

According to every activist we spoke to, this number is not even a tenth of the actual number of manual scavengers in the state. Samuel also says that the state never conducted a proper survey in the first place. “I belong to the Arunthathiyar caste, like many manual scavengers,” he elaborated. “My immediate and extended families are also in the occupation, yet none of them were ever surveyed.”

After the 2015 survey, the SKA surveyed eight districts in the state to replicate Tamil Nadu’s numbers. It identified 3,032 manual scavengers and submitted the data to the government. However, on the pretext of verifying these names, government officials allegedly harassed and intimidated manual scavengers.

“They threatened to arrest them and took signatures from them on paper stating that they were not manual scavengers,” says Samuel.

In January 2018, data submitted in the Rajya Sabha by Hardeep Singh, the Union minister of housing and urban affairs, noted that Tamil Nadu topped the chart in manual scavenger deaths. Of the 323 fatalities reported across the country since 1993, 144 – 44.5% – were from Tamil Nadu.

In 2018, the Centre initiated a resurvey in 18 states, covering 164 districts. But there are concerns that  the exercise is once again bypassing the people it is meant for. For example, six districts in Tamil Nadu are on the list – Tiruvallur, Tiruchirappalli, Chennai Madurai, Coimbatore and Kanyakumari – but others, like Ramanathapuram, where manual scavenging still exists on a large scale according to activists working in these areas, have been left out.

Just Rs 7 per day from readers like you will keep The Wire going. Click here for more details.

Samuel, who is also volunteering for the Chennai segment of the survey, says there has hardly been any publicity or awareness generated that a survey of this nature is underway. G. Vidya, an assistant executive engineer with the Solid Waste Management Department, says however that publicity material had been pasted on auto rickshaws around the city.

A corporation official who didn’t want to be named also said that the survey had been advertised in six newspapers. Dina Thanthi was the only Tamil newspaper on his list. The rest were English newspapers, which Selvaraj and many others seldom read. The rules on the NSKFDC website clearly stated that the advertisements need to be printed in Hindi or vernacular languages.

None of the men and women who came to the camps to register themselves had heard of the survey, however.

Deepthi Sukumar, the national convener of the SKA, said that this is a pattern followed by the government: “They advertise only one day before and give no time for the manual scavengers to get their documents ready.”

According to Samuel, the total turnout in the Chennai camps was around 700.

But will this survey also end up like its predecessors – lazy and misguided? And what about the many who aren’t even aware that their work as  manual scavengers gives them rights they don’t know are there?