According to the now-revoked government order issued on March 26, "People trying to enter/seek refuge should be politely turned away." A man holds a National League for Democracy (NLD) flag during a protest against the military coup, in Yangon, Myanmar March 27, 2021. Photo: Reuters/Stringer

New Delhi: The Manipur government has reportedly withdrawn an order barring district administrations and civil society organisations from opening shelters or providing food to refugees from Myanmar who may have crossed the border in the recent days, as the military intensifies violence against those protesting against the coup.

According to the government order issued on March 26, only medical attention could be provided in case of “grievous injuries” on “humanitarian consideration”. The notice was addressed to the deputy commissioners of the Chandel, Tengnoupal, Kamjong, Ukhrul and Churachandpur districts. 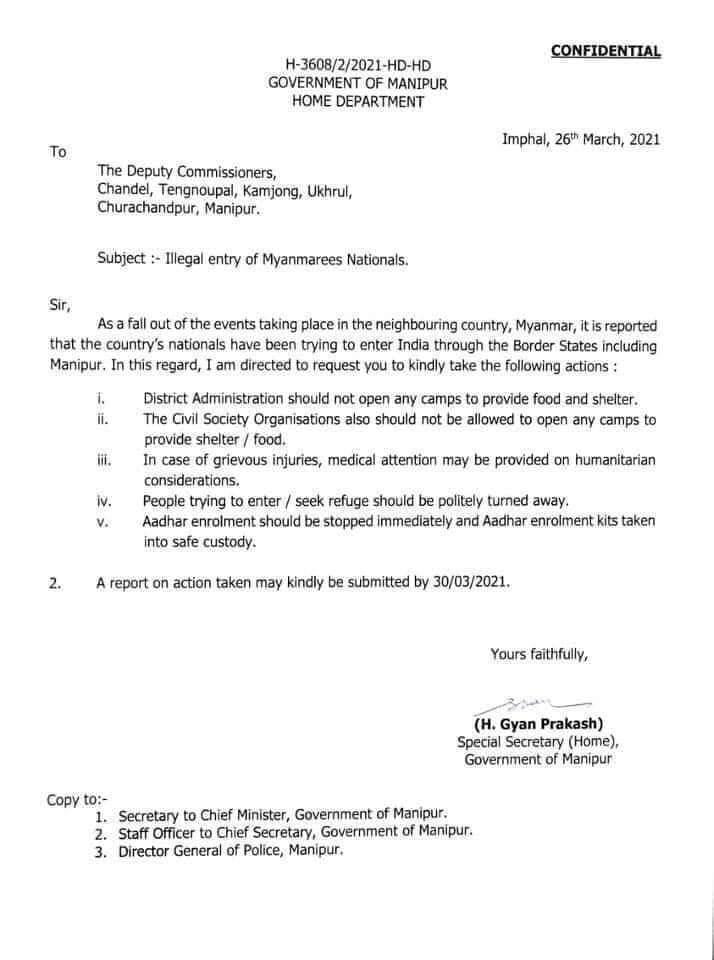 “People trying to enter/seek refuge should be politely turned away,” reads the order. “Aadhar enrollment should be stopped immediately and Aadhar enrolment kits to be kept in safe custody,” it adds.

This order was issued on March 26 – the same day when Myanmar saw large-scale violence from the security forces, killing 114 people across the country. The same day, the Indian government decided to send representatives to attend a military parade organised by the coup leaders. The pro-democracy movement in Myanmar had then asked why “one of the greatest democracies in the world” sent a representative to “shake hands with the generals whose hands are soaked with our blood”.

Myanmar’s ambassador to the United Nations has appealed to the Centre and various state government to provide shelter to those fleeing Myanmar, NDTV reported. He added that the two countries “have a long history, let’s never forget that”.

The original Manipur government order has received criticism from various quarters on social media, including from former national security advisor Shivshankar Menon, who called the order “beyond shame”.

How do you “politely turn away” people seeking refuge?
https://t.co/4Bhd4yZKZH

Perhaps in light of the widespread criticism, the Manipur government on March 29 withdrew the earlier order. Issuing a fresh notification, the government said the “contents of the [earlier] letter have been misconstrued” and the “state government continues to provide all aid”. The home department did not clarify what part of the first order had been “misconstrued”. “Main concern seems to be to prevent a flood of refugees, but it is against sentiments, especially tribal sentiments, in the North-east which is in favour of victims of repression and conscientious objectors, and sends a very wrong message to the Myanmar people who are fighting for freedom and democracy,” he said. Mukhopadhyay expressed relief that the Manipur government had realised its mistake and withdrawn the March 26 notice.

While the earlier order has been withdrawn, various people pointed out that the border is still being very heavily guarded by the Assam Rifles, thus making it difficult for refugees to cross over.

While the #Manipur govt has withdrawn this order, the India-Myanmar border continues to be heavily guarded by the #AssamRifles on the MHA’s orders. So that standing policy of turning away asylum seekers remains.#India #Myanmar pic.twitter.com/BEgQb9k7C8

Earlier, The Hindu reported, the Mizoram government had issued guidelines directing officials to provide shelter to those coming from Myanmar after the violence. However, these guidelines were withdrawn after intervention by the Union home ministry. The Mizoram chief minister, however, has expressed his support for the democratically elected government in Myanmar, including holding a meeting with Myanmar’s “Foreign Minister” Zin Mar Aung, who is actually the acting foreign minister appointed by the government-in-exile made of National League for Democracy lawmakers who were ousted in the February 1 military coup.