Four policemen have been suspended and a probe has been ordered. 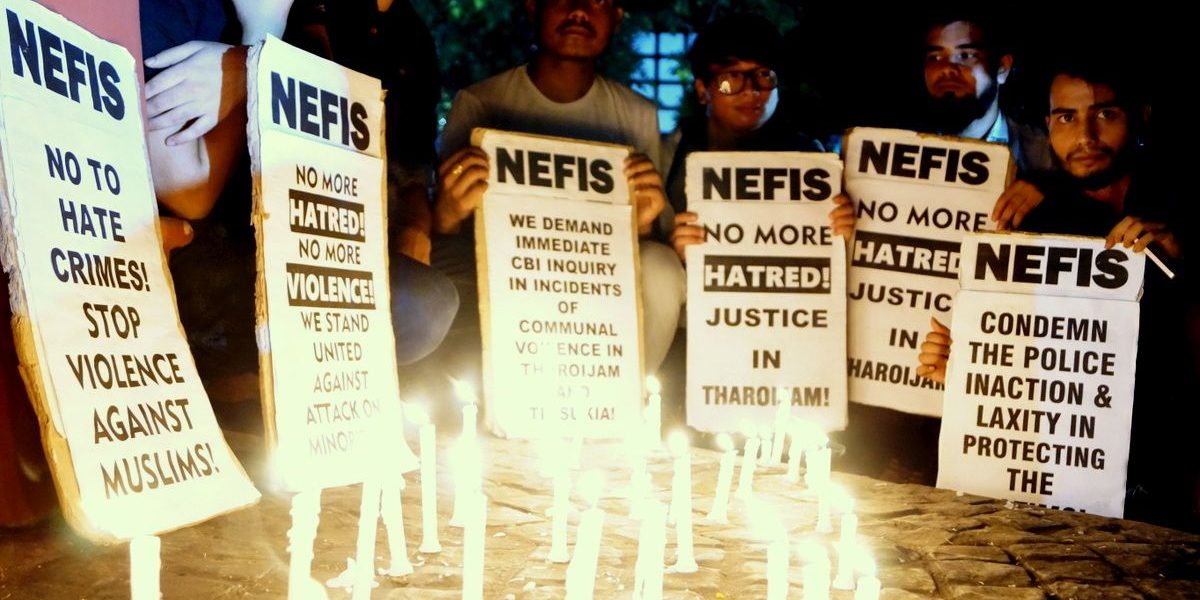 Candle light vigil at North Campus, Delhi University on September 15 over the lynching of a youth in Manipur organized by the North-East Forum for International Solidarity. Credit: NEFIS

New Delhi: After one of several purported videos of the violence in which a 26-year-old man was lynched in Manipur’s Imphal district showed armed police personnel apparently present in the village while the man was still alive, the Manipur police said on Sunday that a probe has been ordered and action taken against four policemen.

PTI reported that a sub-inspector has been suspended and services of the three other personnel had been terminated. “One sub-inspector has been suspended while three personnel of Village Defence Forces were terminated Sunday as one of the several videos of the incident circulating on social media showed that the four personnel were present at the spot when Khan was lying unattended,” Imphal West SP Jogeshwar Haobijam Haobijam said.

A relative of Mohammad Farooque Khan who was lynched, Mujibar Rehman, told the Indian Express, “The presence of policemen shows that the villagers had probably called them and they arrived. But they did nothing to save the victim. Their role needs to be investigated.”

According to the Indian Express report, police personnel reached the spot when they heard about the violence but their vehicles were stopped on the way and they walked to the village.

“A few officials went to the spot on foot to check the situation and safeguard against any further assault until the victim could have been picked up and brought to the vehicle. A proper enquiry needs to be done — we cannot come to any conclusion from seeing a few seconds of video as to what was their role,” the newspaper quoted a senior official as saying.

On September 14, Mohammad Farooque Khan was lynched by a mob who suspected that he had stolen a two-wheeler. There were two other people with him who managed to accept, but the police does not yet know who they are.

Five people, including an Indian Reserve Battalion constable, have been arrested so far. “The hunt is on for those accused who are still absconding. We will arrest them soon,” the SP told Indian Express.

A Joint Action Committee formed against the lynching met Manipur chief minister N. Biren Singh on Sunday and gave him a signed memorandum of agreement. The first point on the agreement, according to the Indian Express, was, “The state government will suspend the erring police personnel who were on duty, as visible in video clips circulated on social media, immediately. Departmental enquiry against the erring police personnel will be completed, as per procedure, preferably within a period of one month.”

JAC convenor M.A. Zabbar was quoted as saying, “We have been assured that the absconding accused will be arrested at the earliest and the attackers will be brought to book.”