Malice in Wonderland: I Imagine a Tale for Independence Day

'Truth will be lies and lies will be truth. And the Silents will speak and the Noisies will be silenced.' 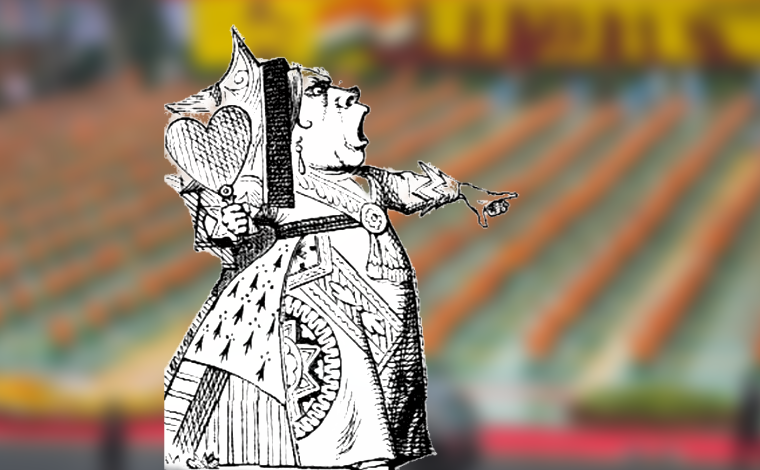 It seems not all creatures in the land loved the Queen. I should think because love is best mutual. And while she liked courtiers, she did not much care for the others. She clearly liked them to hold their tongue.

Perhaps a case of being tone-deaf, or a damaged inner ear? I wonder if all voices made the Queen ill or if it was musical harmony that she especially hated? Maybe jugalbandi between two equals made her dizzy and acapella choir singing made her feel disoriented. And multiple voices speaking at altered pitches addled her brain, which made her go as purple as a bursting summer jamun.

I imagine that to make it possible to rule this ‘unruly’ kingdom, she branded all creatures in the land Noisies and Silents. Decreeing, moreover, that only Silents would be allowed to freely speak, for they spoke at the only pitch the Queen could tolerate without losing inner ear balance.  A pitch similar to a dog-whistle I imagine, and the words coming out like gas because her Silents were always bent like a bow. What she would have really wanted was to make everyone bow perpetually, even those in wheelchairs, who could not, would not. This would have made her even angrier.

What if one day the Queen decreed that henceforth entry to Wonderland was only for Silents? My O My! What a rude and random rule that would be. The Noisies would surely come tumbling out to yell, for such an odd and un-free Wonderland that would be, with no Noisies. But with so many voices yelling and speaking all at once, the Queen could go mad. “A Crime! A Crime! Off with their heads!” she would shout at the top of her voice.

Her courtiers would no doubt echo – ‘Crime! Crime! Terrible crime!’

But what if the Noisies were many, and no one listened, and no one agreed with the Queen? And a veritable symphony echoed across the land. With Wonderland banners and buntings and singing in the streets. Acapella songs rising from one corner of the vast kingdom to the other in perfect harmony. For no lover of harmony would like such a rude and random rule. Especially the wise old women of the land, for they could see into the future.

What if the Queen decided there and then to throw them all into the darkest dungeons of the kingdom?

I imagine first there would be a trial. Lewis Carrol will tell you – the Queen loved trials. Simple affairs that ended with the offing of heads.

But for a trial even the Queen needed a proper crime. To that end handsomely paid soldiers would be briskly dispatched to create the crimson crime scene. One that no one could not call a crime. And a cruel crime it would be.

Perplexing even to imagine – first a noisy Wonderland celebration that was no crime, and then a crime that was indeed a terrible crime.

“How will she turn the first into the second?” cried Alice.

“Aah,” said the Cheshire Cat, who knew how Wonderland worked.

The Department of Stories would no doubt be called to spin a tall tale. The kind of tale in which the tail becomes the head, and the head the tail. And the first is blamed for the second. It would be a magically mangled yarn.

For the Queen has called the first the crime, and so a crime it is. You see?

The trial would work on two simple rules:

(I can picture the Queen clap gleefully each time. She loved trials.)

The dungeons of the kingdom would be filled with Noisies. And the streets of Wonderland would fall silent.

Now imagine something incredible happening – at first a rumbling  beneath the ground and then a babble of voices piercing the thick walls  of the dungeons to touch the tallest peaks. Young Noisies arguing and the wise ones thinking with furrowed brow.  Everyone debating with elan – furiously disagreeing and agreeing as well. But always breaking bread together.

Above all, imagine imprisoned songstresses holding  hands, raising their voices and beginning to sing again, in acapella, of freedom and love – the most beautiful sound ever heard across the land. Filling the streets and reaching the skies, making the birds forget their own songs, to sing instead these songs of the freedom fighters. For birds know the meaning of freedom.

Imagine! Such a sound that even Silents creep out of their houses and press their ears to the dungeon walls, breathing in the sweet smell of freedom wafting out of the dungeons  and yearning to live in its embrace forever.

Picture the dungeons of Wonderland becoming bigger, with the dungeon guards (some of them secret Noisies) too coming to love the soaring songs of the polyglots. Until one day they fling open the gates for the world to see with wonderment the dankness of the underground transformed by the love of ordinary Noisies into new gardens of freedom, flower and song. And the outside – a shrunk and arid, song-less prison of the Queen.