The accident took place near Patha village on Saturday night, when nearly 20 migrant labourers were travelling in a truck carrying mangoes. 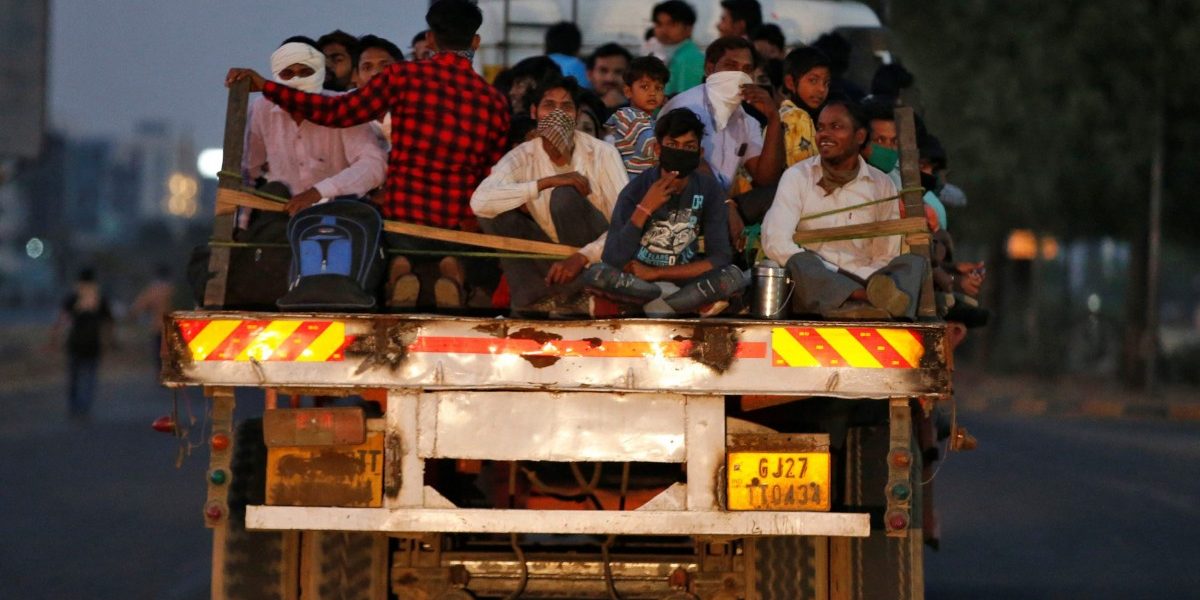 Representative image: Migrant workers and their families travel in a trailer truck as they return to their villages during a 21-day nationwide lockdown to limit the spreading of Coronavirus disease (COVID-19), on the outskirts of Ahmedabad, India, March 29, 2020. Photo: Reuters/Amit Dave

New Delhi: At least five migrant labourers were killed and 13 others injured when a truck in which they were travelling overturned in Madhya Pradesh’s Narsinghpur district, a police official said on Sunday.

The accident took place near Patha village on Saturday night, when nearly 20 migrant labourers were going in the truck to Jhansi and Etah in Uttar Pradesh from Hyderabad, Additional Superintendent of Police Rajesh Tiwari said.

Five labourers were killed and 13 others were injured after the mangoes-laden vehicle overturned, he said.

Madhya Pradesh: 5 labourers died, 11 injured after the truck they were in, overturned near Patha village in Narsinghpur. The labourers were going from Telangana’s Hyderabad to Uttar Pradesh in the truck, which was also carrying mangoes. More details awaited. pic.twitter.com/bowYPVMn1P

The injured persons were admitted to the district hospital for treatment, he added.

According to ANI, the injured workers are being tested for COVID-19 as one of them has a cough and fever.

2 people referred to Jabalpur as one of them had head injury&the other had mandible fracture. 2 other are critical & others are stable. One of them has cough, cold & fever since 3 days so we’ve conducted samplings of all of them, including the dead: Civil Surgeon,Dr Anita Agrawal pic.twitter.com/zJUvQp1FBS

These deaths come just a day after 16 migrant workers were crushed to death by a goods train in Aurangabad, Maharashtra on Friday morning. The workers were walking to Bhusawal city from Jalna in central Maharashtra along the rail tracks. They were returning to Madhya Pradesh, their home state.

Ever since the government announced a nationwide lockdown to stem the spread of COVID-19, without adequate measures to help migrant workers and daily-wagers survive, there has been an exodus from various cities across the country to the villages, as workers try to make their way to their families. A large number of workers have lost their lives in the process, due to exhaustion and accidents.