After a Muslim man and a Hindu woman eloped, a mob rampaged through the Uday Nagar village. Apart from damaging the mosque, they also chanted communal slurs. 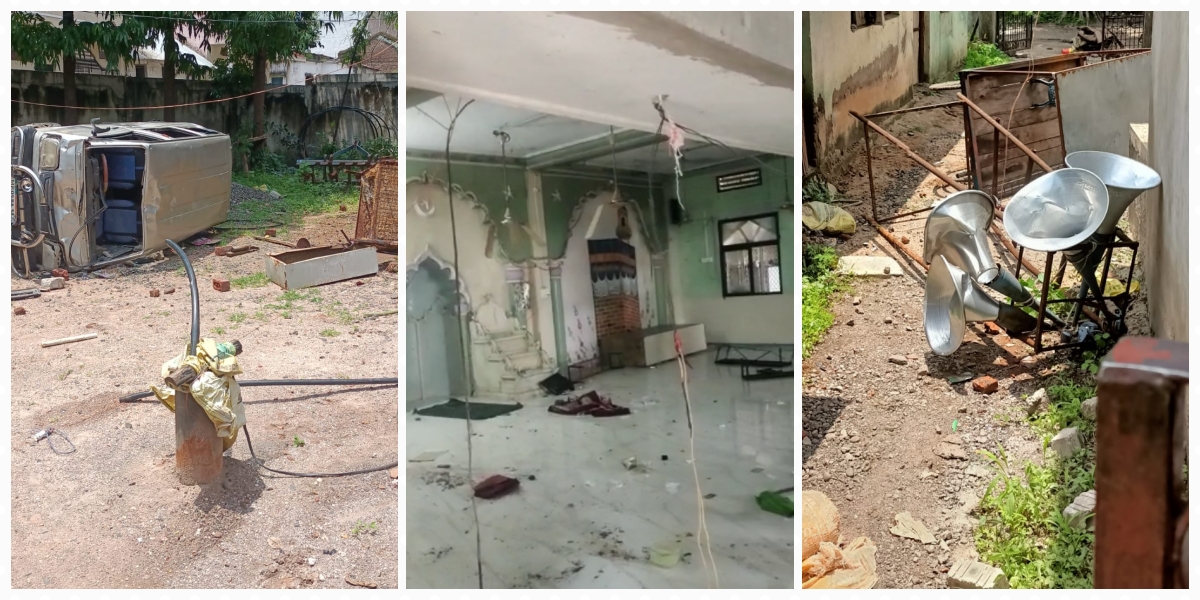 Damage caused to a mosque in Uday Nagar, Madhya Pradesh, allegedly by a right-wing mob. Photo: By arrangement

New Delhi: A village in Dewas district of Madhya Pradesh remained tense over the weekend after the local mosque was damaged during a protest against an interfaith relationship.

According to reports, Saifi*, a 20-year-old Muslim man, eloped with 19-year-old Ritika*, who is from a Dalit community. This triggered tensions in Uday Nagar village and the surrounding region. A complaint was filed by the woman’s family against Saifi to the Uday Nagar police station following which an investigation was initiated.

On August 27, during a rally in the village, locals allegedly chanted communal slurs and vandalised the local Jama Masjid. In a video accessed by The Wire, the group can be heard chanting that Muslims “will be cut” and giving calls to damage mosques.

Kaifi* a shopkeeper witnessed the tension. He explained what transpired to The Wire. “On August 27, which was a Saturday, a Hindutva mob surrounded the police station. They also took out a rally and chanted communal slurs. After that, our Jama Masjid was vandalised. The windows, pipes and fans of the mosque were damaged and even the Quran was thrown on the ground. My shop was also attacked.” he said.

A car, two motorcycles and speakers of the mosque were also damaged, the shopkeeper said.

A first information report (FIR) was registered for the vandalisation of the mosque by the Uday Nagar police station after the Muslim residents filed a complaint. The FIR was registered under sections 147 (rioting), 452 (trespassing) and 427 (mischief causing damage) of the Indian Penal Code (IPC).

The FIR, which was seen by The Wire, mentions Shera Yadav and Shubham as the accused alongside a mob of 20-25 unknown persons.

Sheikh*, a resident of Uday Nagar, told The Wire, “In the mob were locals and representatives of a mix of organisations like the Bajrang Dal and RSS. Shera Yadav and Shubham are still moving around freely. No arrests have been made, which is contributing to the continuation of fear in the region. People are leaving temporarily because we are scared.”

Media reports said that the police have assured that arrests will be made in the case. The sub-divisional magistrate S. Solanki intervened and took stock of the situation, after which a flag march was conducted in the region.

A delegation of local Congress leaders met the Dewas district collector and demanded action against people who were involved in damaging the mosque.

The Wire tried contacting the Uday Nagar police station but did not get a response.

*Names have been changed to protect the identities of residents.