Amidst the Lockdown, a Man Grieves for His Dead Wife From 1,400 Km Away

Naresh Bhuiya, a construction worker in Hyderabad, had one priority for the past six weeks – to get home to his ill wife in a village in Jharkhand’s Garhwa district. On Monday afternoon, Shanti Devi passed away. 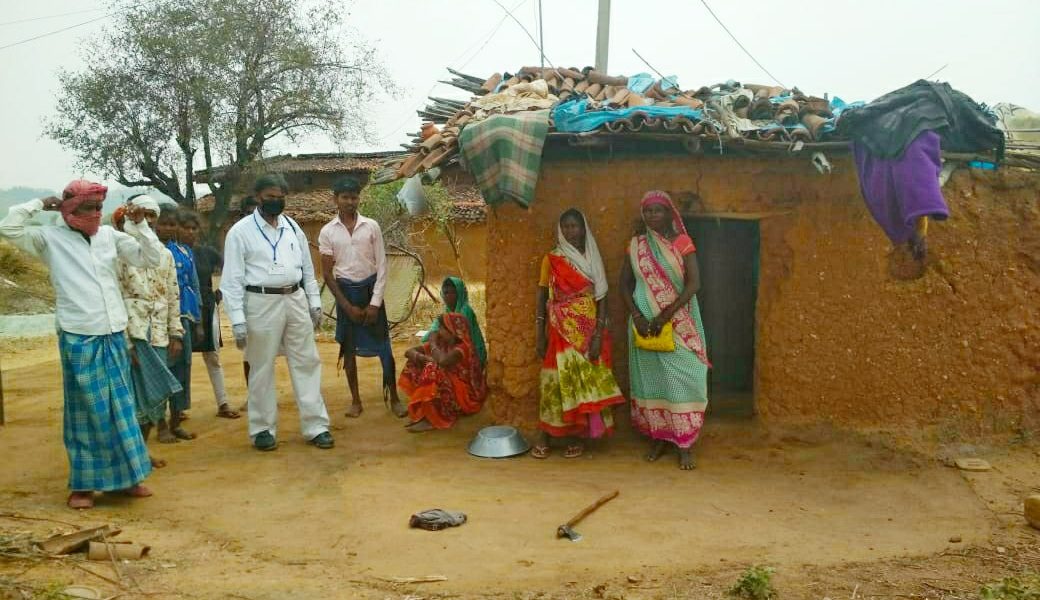 Naresh Bhuiya does not even want to attend phone calls anymore.

His friends, with whom he shares space in a labour colony in Hyderabad, say he has to be convinced to even eat his meals.

For over six weeks, 49-year-old Bhuiya had only one priority – to go back to his home in Bheemkhand village of Jharkhand’s Garhwa district. His wife, Shanti Devi, had a mysterious fever that just would not subside.

“She would call him and say, ‘just come back’. She kept telling him that she was waiting for him to come back,” says Santosh Ram, one of the men from his village who works with him at the construction project.

Bhuiya told her that he was trying his best. 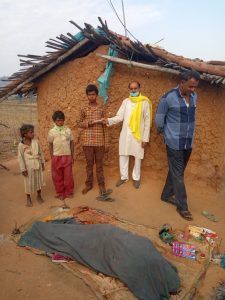 The three children of the Bhuiya family.

On Monday afternoon, Shanti Devi passed away, leaving behind three young children and a regretful husband.

“He keeps saying that if he had been allowed to go back, he would have found a way out, that he could have got her to a doctor in time,” Ram says.

He isn’t alone. Across the country, the lockdown is taking a deeply personal toll on the lives of the poor.

Stranded in their locations of work, migrant workers like Bhuiya are being forced to endure immense personal hardships, being away from their families in a nerve-wracking time like this. The lockdown has meant that many migrants are unable to go back home in times when their family needs them the most.

In Bhuiya’s case, having to let his children fend for themselves has left him distraught.

Bhuiya’s family is steeped in poverty – Bhuiya is the only earning member, making around Rs 6,000 each month, with five others to support – his now-deceased wife, three young children and his visually-challenged mother. Villagers point to the partly collapsed roof of the one-room house that the landless Dalit family lives in. 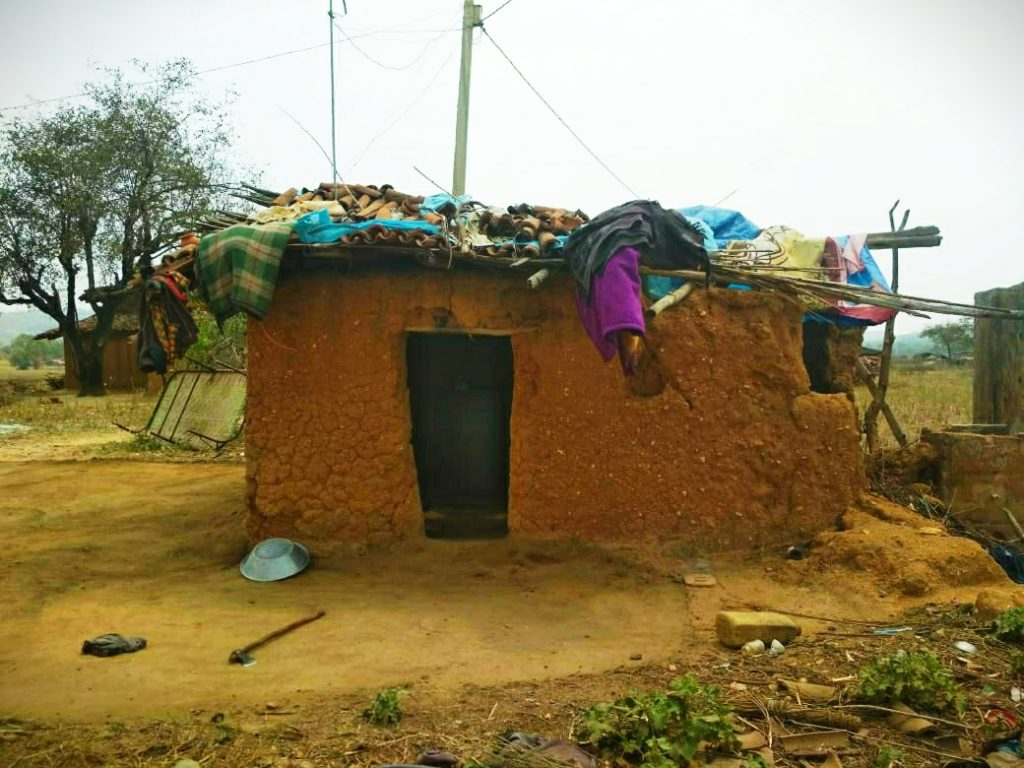 Talking to The Wire, the Meral block development officer Manoj Tiwari said that a government doctor examined Devi soon after her death. “The doctor found that her body was swollen and that she was severely anaemic, leading to her death.”

Many locals believe that the death was one caused by severe malnourishment. Mohammed Kalamuddin Ansari, member of the Garhwa district legal services authority, said that the death was brought on by the family’s poverty. “When we visited the house, there was only some rice and no other pulse. Neighbours told us that since she was not well, the children were forced to cook and they could only manage to cook some rice,” he says.

The rice, then, would be consumed with salt or a chutney made by squashing wild greens that the family would pluck from around the house, he adds.

The lockdown meant that Bhuiya did not get paid his dues for February and March. “The contractor who got us here told us that he is struggling to receive payments from the builder. So, he can’t pay us.”

But after the workers protested, the contractor paid the workers around Rs 2,000 each, till he could find enough money to settle their dues.

Also read: Interview | ‘At the Stroke of Midnight, Migrant Workers Became Aliens in a Double Sense’

Shanti Devi’s fever treatment, before the lockdown struck, cost around Rs 800. Some of the remaining money was used to buy groceries for the house. But the lockdown meant that the family could not get Shanti Devi to a hospital.

“There is one hospital about 20 kilometres away from here, but there was no transport at all to take her there. Plus, such visits take a lot of money and we did not have any,” says Mukesh, her brother-in-law.

So, all Bhuiya could do was continue being on the phone with his family through it.

“He would call them constantly, and even video-call them sometimes. She would tell him that things would be fine only if he came back. In response, he would tell her that she should stay strong till he got back,” says Ram.

In a suburb of Navi Mumbai, Ashish Kumar is just as distraught.

All that the 10-year-old in Barkatha village in Hazaribagh had wanted was to spend a few days in the new city that his father kept talking about.

So, Kumar finished his school and headed to Mumbai in early March to live with his father, Vinod Mondal, 33, a construction worker in Navi Mumbai. And then, the lockdown started.

“Ever since then, he has lost all this enthusiasm. He keeps calling his mother and crying. In turn, she can’t hold herself back and she starts crying too,” says Mondal.

The 10-year-old says he misses home. “I miss my mother a lot. She is alone and I am her only son.”

Back at home, his mother, Gomti Devi, is worried not just for Ashish, but also her husband Vinod, who has a heart condition. “Each time he gets worried, his chest starts paining. What if something happens to him during this lockdown? Will he get any medical care? How will Ashish manage?” she asks, over the phone from Barkatha, in Jharkhand’s Hazaribagh district.

Gomti Devi says she is constantly glued to the news, wondering when the cases in Mumbai and its surrounding areas will start dipping.

“Even here in the village, my father-in-law and other villagers are constantly telling me to get Ashish and his father back home because it is unsafe to be in Mumbai. This pressure is too much for me to handle alone,” she adds.

These two stories reflect the larger crisis that is unfolding across urban and rural India, not just economically, but also at a social and psychological level, believes Aparna Joshi, a faculty member at Mumbai’s Tata Institute of Social Sciences (TISS).

Joshi helms TISS’s iCAll helpline (9152987820), an free eight-year-old telephone-call-chat psychosocial counselling service, that started a special helpline last week focussing on those affected by the current lockdown. Some of the callers need material relief, especially in the form of food. Some others are anxious about contracting the disease.

But a significant chunk of the callers are workers anxious about personal situations at home that they can’t attend. Joshi says the helpline has received calls not just from stranded migrant workers, but even their family members from their villages, worried about those stuck in cities.

She believes that the feelings around their absence are worsened by the physical lockdown. “In any case, the city creates a sense of alienation for them. With the lockdown, this is a different kind of loneliness and alienation, shrouded with a complete uncertainty about their future,” she says.

Contributing to this unease is the material hardship that most migrant workers like Bhuiya face – financial hardship combined with inadequate food and relief measures. “Amidst all this, the mobile is all they have… Often, workers feel like they should not tell their families their troubles,” she adds.

After Shanti Devi’s death, Bhuiya has constantly been on the phone with his family. His second son, Vinay, suffers from periodic seizures and Bhuiya is constantly worried about his health, especially as his wife no longer around to take care of Vinay.

But each time he calls his home, he sees his youngest daughter, 8-year-old Soni Kumari. Ram, who has not left his friend’s side since the illness, says, “Soni starts crying every time she sees or hears her father on the phone. The chats only make Bhuiya desperately want to go back. But he has barely enough money to eat here, leave alone get a ride back home.”