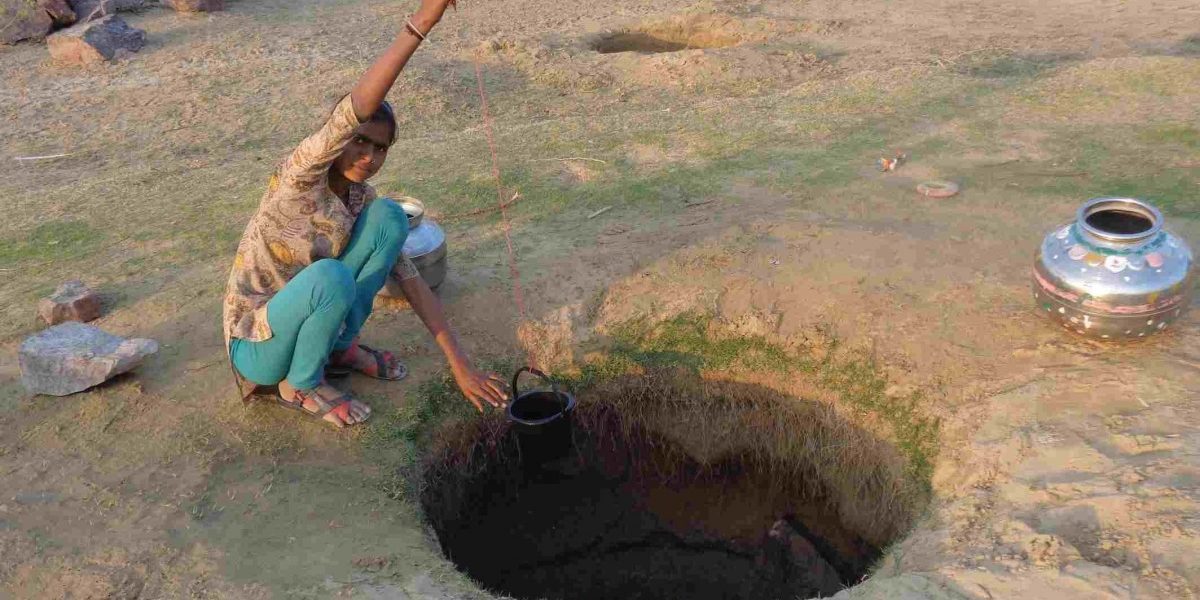 One of the most effective ways to defeat COVID-19, as suggested by health experts, is to maintain personal hygiene and washing hands frequently using soap. In a country like India, which was ranked 13 on Aqueduct’s list of “extremely highly” water stressed countries in 2019, one can only imagine the challenges that will pop up in the summer.

A survey found that “a little over 80% of Indian households have access to just about 40 litres of water a day. In rural households, the scenario becomes worse as only about 20% have pipe-water supply.” Rajasthan is one state that has been battling a water crisis for several decades. Expecting its rural population to “wash hands with soap frequently” when they do not have access to safe drinking water in the first place is a mockery of their situation.

Neemu Khan is a resident of Badnawa Charanan village of Patodi Panchayat Samiti in Barmer district of Rajasthan. “There is no source of water in our village that includes 50 hamlets – neither a hand pump nor a water supply point like other villages. To meet our needs, we have to pay Rs 1,200 for one water tanker. Due to the lockdown, our livelihoods have been severely affected. The daily wage workers are the worst hit. How on earth are we expected to pay for water when we have lost all our sources of livelihood?” he asks. 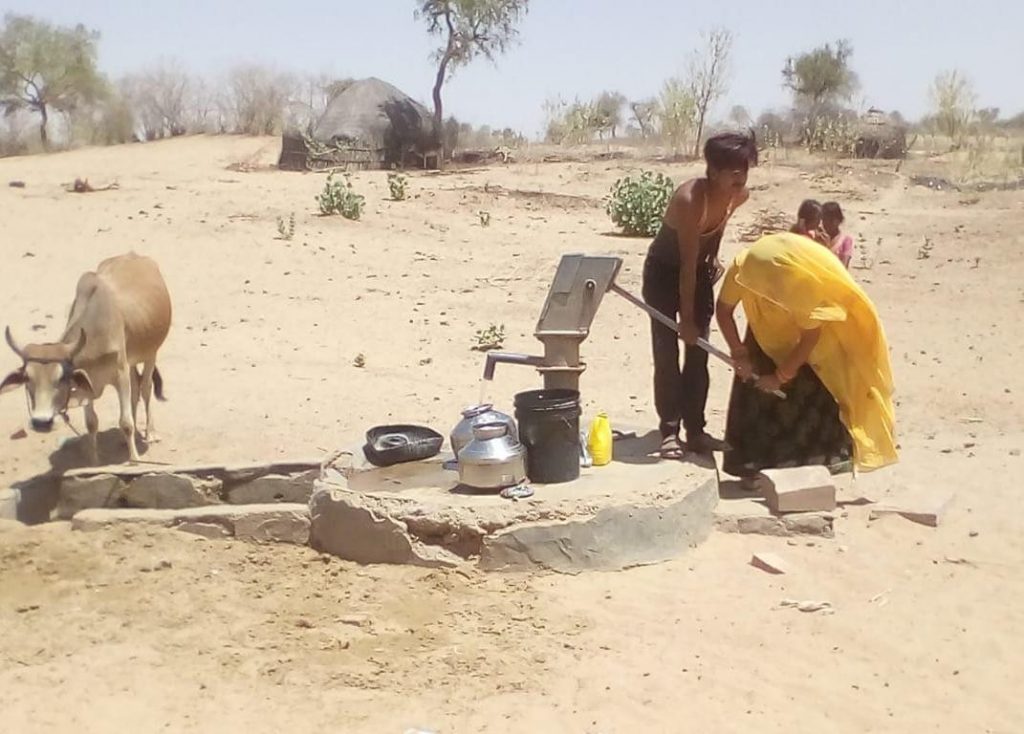 According to Neemu, the villagers are already feeling helpless with the worst (increasing temperatures) yet to come. They have exhausted the water which was harvested during the monsoon. “We are still able to walk our livestock 5-6 kilometres for water but arranging safe drinking water for ourselves has become an impossible task,” rues Neemu who claims to have reported the matter several times to the water department. “I have been communicating with the Water Department through the helpline number 181 for the last year. Instead of finding a solution, the concerned officers would present me with different arguments citing their inability to do anything about it,” he says.

Also Read: Coronavirus: Why Frequent Hand Washes Are Not Feasible for Millions of Indians

A similar crisis is unfolding in the Saijali Panchayat of the same district. In the village called ‘Lumbaniyo ki Dhani’, villagers have to wander for miles to gather drinking water. Inhabited by the Kalbelia tribal community, famous for the traditional dance of the same name, this village is in a crisis. “Due to the lockdown, all of us are out of work. Under the Bhamashah Yojana, ration has been provided to our families however, there is no water – all the storage tanks are dry,” shared Krantidevi Kalbelia who belongs to one of the 18 Kalabelia families residing in the village.

According to her, this village was not provided with any water supply point under the Indira Gandhi Canal Project – the largest irrigation project of India. There was a handpump in the village that offered saline water to the families but for the last one and half months, even that is not working. Villagers apprised the concerned authorities but to no avail.

As this village is located at a height of 40 feet on a sand dune, it is difficult for the villagers to avail the services of a water tanker. “In the absence of a road, the only way to transport the water tanker to this height is by connecting two tractors together and at a cost of Rs 2,000 per tanker which no one among us can afford. Even during the famine or in case of any other disastrous event, absence of road makes it difficult for the government relief to reach us,” shared another member of the Kalbelia community.

This water crisis has, on one hand, forced villagers to drink unsafe water and on the other, made the water mafias even more powerful. These mafias are selling millions of litres of water through tankers after illegally acquiring it from the pipeline of the Indira Gandhi Canal Project. The theft is allegedly occurring with the connivance of officials and employees of the water department. Using the illegal connection, they break open the air valve and fill the tanker by breaking the pipeline, leaving no water to be supplied to the villages.

Besides the smuggling of water by these mafias, another critical system failure is that many hamlets are devoid of any water supply points. Villages which had the backup of influential people were allocated the supply points but those inhabited by poor, Dalit families are still deprived. In this unprecedented lockdown, these villages are left to manage on their own. 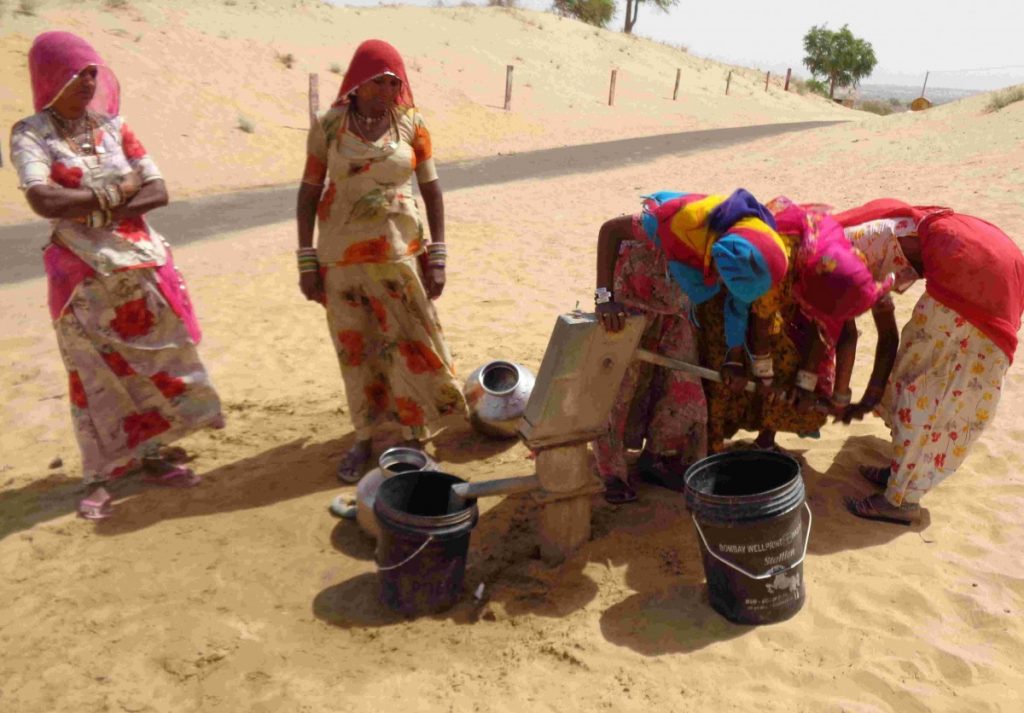 For example, in 25 hamlets of Karnisar Village, which are inhabited by the Bhil community, there is no provision for water supply. Few years ago, a Ground Level Reservoir (GLR) was constructed and connected to the pipeline by the government but till date, it hasn’t received a single drop of water.

Similarly, there are 50 hamlets inhabited by the Bhil community in the newly formed Gram Panchayat Gangapura of Patodi Panchayat Samiti in Barmer district. The pipeline of the Indira Gandhi Canal Project passes through these hamlets but there is no supply point for the villagers to collect water. “Every day, we see hundreds of tankers being filled illegally from the pipeline in Badnawa Jagir. They break the pipeline, put pipes in the water tanks and pump the water out. This water theft, undoubtedly, is transpiring under the knowledge of water department officials and local employees. No one cares for people like us, who are suffering for a single drop of water,” rued Sita Ram Bhil, a resident of Gangapura Gram Panchayat.

As part of the Indira Gandhi Canal Project, the work is under progress to allocate water supply points in the above-mentioned villages for quite some time now. In the meanwhile, public supply points have been constructed between 20-25 hamlets. However, several hamlets in the Barmer district have completely dried up with no help from the government.

The entire nation is well-aware of the miseries this lockdown has brought upon the working class. Workers have left cities across states to reach their villages and in villages, daily wage workers who earned their daily ration through menial jobs are rendered hopeless. “The water crisis is not new – it’s an annual affair but in this lockdown, we have hit the rock bottom. We are confused. With whatever small savings we have, should we buy water or ration?” shared a helpless Shantiram Bhil from Karnisar Village.

This article was republished from Charkha.