As many as 8,000 Goan seamen are stranded, as the state fumbles over a repatriation plan. Those on cruise liners are facing harrowing circumstances.

Panaji: Adrift off ports across the globe, the COVID-19 lockdown has left hundreds of Indian seafarers working on cruise liners stranded at sea with little hope of immediate repatriation. Conditions on board are fast deteriorating with food in short supply, says the Goan Seamen Association of India (GSAI) which has been pushing for the Union Ministry of External Affairs (MEA) and the state government to set in motion an urgent evacuation strategy for the Indian crew.

Some 15,000 Indians – more than half of them from Goa – work on cruise ships and other merchant vessels. It is the crew on cruise liners, though, that has been the hardest hit. While countries like the Philippines and Indonesia have evacuated hundreds of their crew from MSC Fantasia (off Portugal) and MSC Splendida and Grandiosa (off Italy) over the last few days, Indian seamen have been left in limbo by the country’s ban on incoming flights.

GSAI representative Dixon Vaz told The Wire things have become critical for the Indian crew stuck around the world, with every other country denying them entry into ports. “Indonesia and the Philippines, ranked way below India, have done a terrific job of sending special flights to repatriate their crew, while our seamen are confined to their cabins, and very soon they’ll run out of both food and water. I appeal to the prime minister and the external affairs minister to take up their case urgently.”

Backed by opposition MLAs, Vaz has met with chief minister Pramod Sawant, Union minister Shripad Naik and every other government official to press the case – so far with little result.

Speaking to The Wire from on board MSC Divina anchored off Port Miami, a Goan chef who asked that he not be identified said 126 Indian crew were currently stranded on the vessel. “Our company said they’re willing to fly us back to India by special charter provided our government allows them to land.”

Also read: India Should Stop Kidding Itself and Prepare a Much Bigger COVID-19 Package at the Earliest

The ship which set sail for the French Caribbean with 2,800 passengers turned back in three days after being denied permissions to dock at all ports. All the passengers disembarked at Miami on March 20. “All the Indonesians, Filipinos and Hondurans have left. We’re the only ones stuck behind. We’ve been in quarantine more than 14 days and just want to get home safely,” the seaman said.

There are concerns too that Port Miami could go into a lockdown, making the prospect of their return even bleaker.

For those stuck on cruise ships off Italy, the wait for an escape flight home has been even more harrowing. Three Goan crew on the MSC Grandiosa, docked at Civitavecchia port near Rome, tested positive for the novel coronavirus. An April 6 message from the Indian embassy to the Goa NRI commissioner’s office (a copy of which is with The Wire) said Clario Teles (30) and  Frito Dias (29) were being treated at the Spallanzani hospital, while a third crew member Roosevelt Bosco Fernandes remained in critical condition in Sant Andrea hospital in Rome. 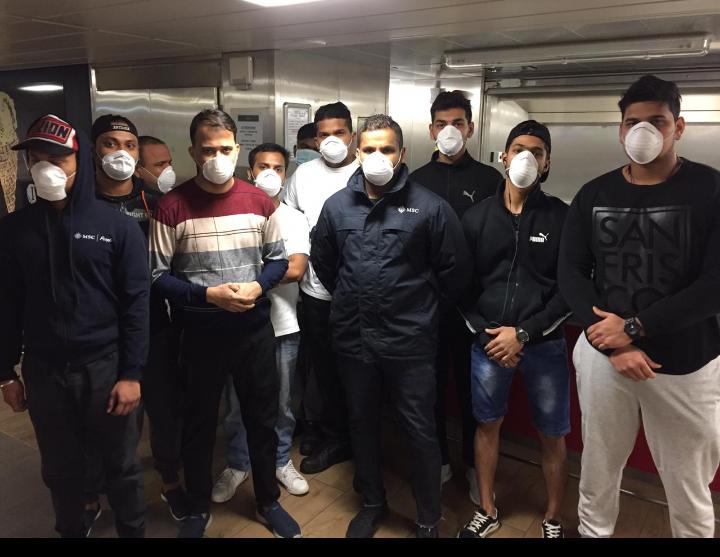 Some of the Indian crew on board the MSC Grandiosa docked in Civitavecchia near Rome. Photo: Special arrangement

Rahul Shanbag from Margao, who’s stranded on the Grandiosa, boarded the ship on September 10 last year. He last went to shore in February. The vessel which sailed from Genoa to Marseille via Barcelona, making several other ports of call, disgorged all its 6,000 passengers at Civitavecchia by March 15. With all the Indonesian and Filipino crew repatriated, only 200 Indian seamen and a handful of others remain in isolation on board.

Rahul is constantly in touch with the Indian embassy, which also sends him updates on the three men in hospital. His company too is willing to fly the Indian crew home, provided the embassy gives the green signal. “I just hope our government takes some action,” he says. In quarantine over three weeks now, the crew is desperate to return and also anxious about the health of the sick seamen.

For the nearly 8,000 Goan seafarers left in the lurch, it helps little that the Goa chief minister has conveniently lobbed the ball to the centre’s court. Insisting that it wasn’t just a state-level matter, Sawant told the media that thousands of other Indians too were stranded abroad, and it was for the MEA to take a call.

In an official statement the government said: “As of now no direction has been received from Government of India regarding opening of ports and airports, once direction is received then it will be communicated to all.”

Strange one might think, because despite the lockdown, the government of India has allowed thousands of tourists to be evacuated by their embassies through special flights from Goa. Even small countries like Czechoslovakia have arranged charters for their nationals to leave this destination. The repatriation continues even today.

The Goa cabinet’s decision Wednesday to recommend an extended lockdown till end April could further shrink the window of opportunity to repatriate stranded seafarers, given the state government’s inability to push its case with the MEA.

“At the moment, we’re in no position to accommodate 8,000 seamen. We haven’t the testing capacity. And where would we quarantine such a huge number?” health minister Vishvajit Rane asks dismissively.

Most of the crew has already been in quarantine, Dixon Vaz says. They would be flown back in batches of hundreds by their companies. They could be easily accommodated in hotels (now bereft of tourists) in a green zone. “But the government has to have a plan.”

So far the Goa government seems to have none.