Daily obstacles to civilian traffic in Kashmir were aggravating enough before the new order, reserving the Srinagar-Jammu highway exclusively for convoys twice a week.

The highway clogged near Barsoo on March 25. Credit: Nisar Ahmad

Srinagar: Stuck in traffic again. The date was March 30, and the place, a dusty road in Galandhar, the intersection on the Srinagar-Qazigund highway around 20 kilometres from the city centre of Lal Chowk.

The cab I was in was in a long winding queue of vehicles waiting for a convoy to pass. Armed forces clad in olive green and pitch-black dungarees ensured we stopped right where they wanted. I timed the halt: 17 minutes plus change. The day before, it had been 30.

“Hai lanath tohi (Woe to you),” rued my co-passenger, directing his words at the armed men as discreetly as he could.

Regular restrictions on civilian traffic in Kashmir are aggravating enough. On Wednesday evening, April 3, however, the ministry of home affairs produced a new diktat: A weekly, two-day curfew on the 300-kilometer Srinagar-Jammu highway, closing it to all civilian traffic from 4am to 5pm, from April 3 to May 31, 2019.

Wednesday and Sunday, every week, the highways will be reserved exclusively for the movement of convoys.

“In view the prevailing security situation viz; Pulwama terror attack and another car bomb attack on the Security Forces’ Convoy at Banihal, and substantial movement of the security forces during the ongoing Parliamentary elections, there is an immediate need to regulate the traffic movement on the highways to ensure security of the SF’s…,” the government order reads.

“This prohibition would be from Baramulla through Srinagar, Qazigund, Jawahar-Tunnel, Banihal and Ramban till Udhampur,” said a government handout in this regard.

The highway meanders through the south, central and northern Kashmir. Unlike many other states which have alternative inter-district routes, one has to use it to reach most places in the valley.

In the event that local traffic has to move, due to an emergency or other reason, the local administration and police can “evolve necessary procedures for this as is done during curfew days”.

In the previous two weeks, the authorities had dug up at least 18 link roads on the highway stretch between Srinagar and Qazigund. I counted as many as eight on the Srinagar-Anantnag stretch: huge craters in the tarred surface of roads that connect villages on either side of the highway. The digging must have been done in the dead of the night to avoid attention.

Back on May 30, my co-passengers light cursing was followed by some bashing of Rajnath Singh for his order to halt civilian traffic. And finally, the local political parties, who were ridiculed for their “drama of promises”. From the National Conference’s claims of autonomy to PDP’s lifting ban on Jamaat-e-Islami and JKLF, to Shah Faesal’s ‘hawa badlegi’, every promise was dismissed for its “hollowness”.

“Yem khabees hekan wanith kehn ti votan khaetri. Wuchu yemo kar aes panisee garas manz qaed (these evil men can promise anything for votes; see, they have made us prisoners in our own homes),” quipped another passenger, while we all waited for the traffic to clear. 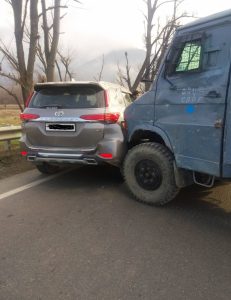 A CRPF vehicle crashed into a civilian vehicle while the traffic was halted on March 15. Credit: Nisar Ahmad

It finally did. The cab moved. The two-lane highway gave us a clear view ahead. Saffron fields on either side. Around 10 km into the journey, we were again stopped at the Awantipora intersection, the spot close to the 15 Corps Victor-force base of the Army, located on the base of Vastoorwan hills. I timed this halt too. Twenty minutes.

The delays coupled with normal traffic jams had added at least an hour to my journey. Include the dusty roads, noisy and cramped cabs, and angrier people: it is not a great start to the day.

Prior to the Pulwama attack, the 60-kilometre journey from my home in Srinagar to the workplace in Anantnag district started at 8 am.

At 8:30, I used to reach Lal Chowk, the city-centre, to board a Tavera (private cabs plying inter-district). The cab would then take the highway, driving through Pulwama, to drop me at my workplace before 10 am. Each day, I would spend three hours, sometimes lesser, to cover the 120 km to-and-fro journey.

Things have changed. Now I am up and hurrying from 7 am, wondering if I will make the 10 am clock-in time.  The way the authorities are dictating it, people say the highway is not theirs to use.

“They should just close it for all civilian traffic and declare it was only built for the armed forces,” says Younis Ahmad, my colleague, who lives in Chersoo, a village right next to the highway in Awantipora.

Wednesday’s order, however, doesn’t explain how an entire population is to manage if the highway is closed. Thousands of Kashmiris travel from one district to another every day. Students, labourers, employees, medical staff and patients all use the road. What are they expected to do? They already live with grueling movement restrictions, why make it worse?

Has anyone in the administration applied their minds before planning to issue this highway closure order? J&K is not Chhattisgarh or Andhra Pradesh where there are alternate routes. Here if you close the national highway you shut down all access to the valley. This is a lifeline.

Last I checked, we were a democracy. But this sounds like a diktat of Martial Law.After bringing Kashmir to the brink, the administration is adamant on ensuring collective punishment for Kashmiris. https://t.co/8RbNYnH0CT