Since December 2, 2020, when he took charge of the Union Territory, Praful Khoda Patel, a one-time BJP MLA from Gujarat, has issued a series of extraordinary orders. 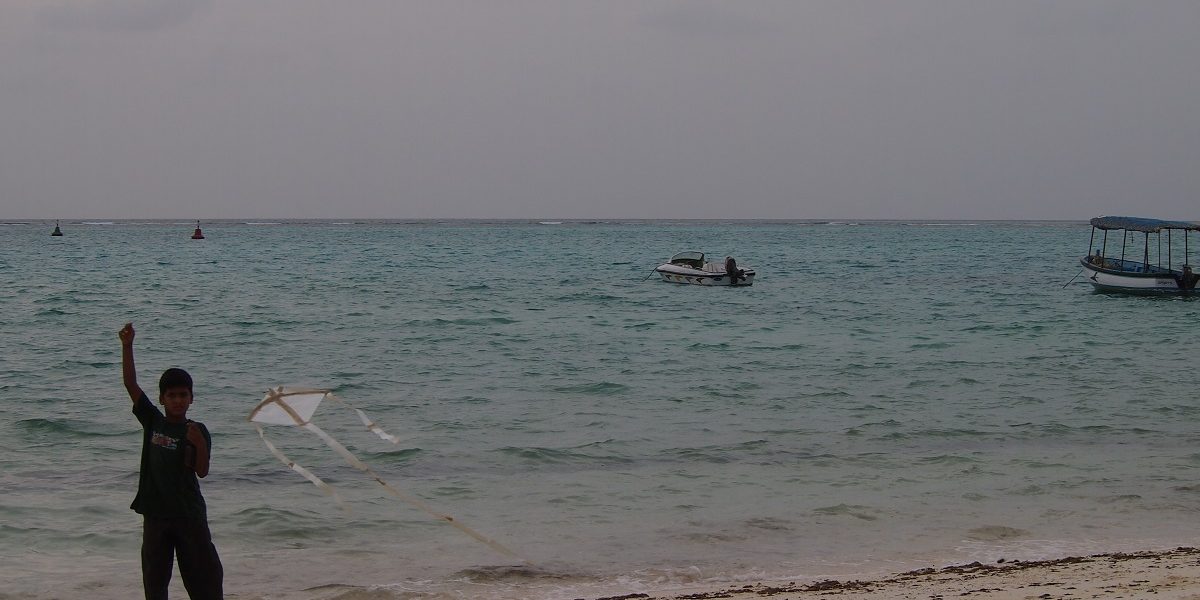 What are Praful Patel’s plans for Lakshadweep?

For a week now, the administrator of this archipelago of 35 atolls and coral reefs in the Arabian sea has been in the news.

Since December 2, 2020, when he took charge of the Union Territory (UT), the one-time BJP MLA from Gujarat has issued a series of extraordinary orders. Among others, folks with more than two children are now ineligible for panchayat positions. Non-vegetarian items have been struck off school menus. Hundreds of casual workers have been laid off. Some protestors against the Citizenship Amendment Act and the National Register of Citizens (CAA/NRC) have been arrested. Fishermen’s sheds have been demolished. Mandatory quarantine, which kept the UT safe from COVID-19 till January, has been done away with.

Taken together, these amendments don’t add up. The Goonda Act – Prevention of Anti-Social Activities – could be seen as an attempt to choke protests, especially since Lakshadweep saw anti-CAA/NRC protests. But, if Patel is consolidating planning powers to push economic activity, why is his administration destroying fisherfolks’ sheds?

“Only 10% of the people here are employed by the government. All others live off fishing,” said a teacher in the UT, on the condition of not being named.

To understand these seeming incongruities – and what they mean for the islands – we have to start with Praful Patel. 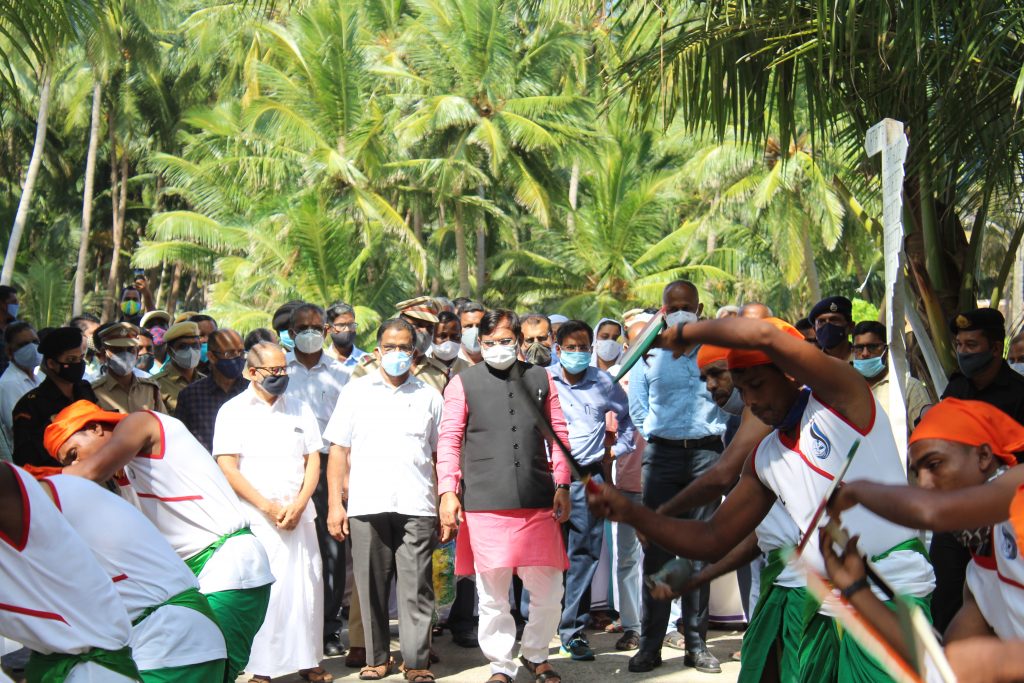 Praful Khoda Patel hit the peak of his political career in 2010.

That year, the one-time MLA (2007-2012) from Himatnagar, a municipality in Gujarat’s Sabarkantha district, became the state’s home minister after Amit Shah was arrested in the Sohrabuddin case.

“In the years since, he has been sidelined,” said an IAS officer, on the condition of anonymity. He lost the 2012 elections. In 2016, he was appointed as administrator of Daman and Diu by the Narendra Modi government. “The post of its administrator is normally entrusted to someone at the joint secretary-level,” said the officer. With a population of no more than 2.4 lakh in 2011, the UT is one of the smallest administrative sinecures in India. Four months later, in December 2016, he was given additional charge of Dadra & Nagar Haveli.

In the years that followed, Diu received treatment similar to what Lakshadweep is seeing today. “When Patel reached the UT, he found himself surrounded by multiple power centres – the local MP, the municipality, panchayats,” said the officer. “He took away powers from all of them – be it funds or functionaries.”

The official attributed this response to Patel’s inability to accept opposition. “He doesn’t realise there are second, third and fourth level reactions to decisions. He thinks orders should just be obeyed.”

In Diu too, the local community came under attack. “Anganwadis were told to stop serving eggs,” said the official. Casual workers were fired. “He thinks all of them got their jobs through nepotism. Overnight, he fired 560 members of tribal communities from the public works department.”

Even as development expenditure was slashed, the UT saw an infrastructure push. “The first thing he does on reaching a new place is to ask, ‘What are the pending construction projects?’,” said the bureaucrat. Indeed, in Diu, while a much-delayed ring road was built, the UT also saw demolitions – not only of fisherfolk’ structures but also homes and Portuguese-era buildings. When locals came out to protest, so many were arrested that two government high schools had to be used as temporary prisons. Thomas Isaac, the former Kerala finance minister, alludes to this in a Facebook post.

“The good thing about him (Praful Patel) is that civil construction works get done,” said the official. “But, from a Human Development Index (HDI) perspective, he pushes his values on everything.”

What happened in Diu is now being reprised in Lakshadweep.

The archipelago has a plethora of pending construction projects. NITI Aayog wants the islands to develop into a site for premium tourism. There is also talk of elevating Kavaratti into a smart city. More recently, the UT administration has floated tenders for rebuilding government offices. And there is speculation that, if not a fresh port, the archipelago might invest in berthing facilities for large ships.

Given that backdrop, the keystone Bill is the draft Lakshadweep Development Authority Regulation, 2021. According to Ahmedabad-based lawyer Anand Yagnik, “The Bill, given the powers it seeks over local lands, is similar to the ones used to acquire land for the Dholera SIR and the Statue of Unity.” In the name of town planning, he said, the state can acquire everything at a low cost.

Similarities between Diu and Lakshadweep do not quite end there. If Diu served eggs at anganwadis, the archipelago serves meat. If Diu protested against demolitions, Lakshadweep has marched against CAA/NRC.

And so, a process of disciplining is underway. This extends beyond arrests of CAA/NRC protestors. “We do not know how long we will be able to speak to you on the phone,” said the teacher quoted at the start of this report.

All this, needless to say, violates the Indian constitution. The people of Lakshadweep are a tribal community. “You cannot impose anything that damages local culture and heritage,” said Yagnik. What does Patel want to do with the power being accumulated at his office?

In an interview to The Print, he dwelled on tourism. “Why is it that people are waiting to go to Maldives, but are not even willing to come to Lakshadweep? It is to develop tourism and for long term benefits that we are introducing the LDAR (Lakshadweep Development Authority Regulation).”

His response invites multiple questions. The islands of Lakshadweep are much smaller than those of Andaman and Nicobar (ANI). The biggest islands are no more than 4.5 kilometres across. As coral atolls, their highest elevation is no more than 3 metres above sea level. Most of them stand no more than 0.5 metres higher.

Despite heavy rainfall, these islands – like those of ANI – are acutely water-stressed. A tourism push which ignores these realities will damage these islands.

Consider the numbers. The NITI Aayog report proposes 1,092 hotel rooms, spread over six islands. An earlier study, by the Indira Institute for Management, Pune (IIMP), had proposed 610 beds across five islands. Another study, by the Union environment ministry’s National Centre for Sustainable Coastal Management, The Wire was told by an expert who saw the study, pegs the islands’ carrying capacity even higher – at 2,523 beds across ten villages.

For a UT with a population of just 64,000 (2011), these numbers are consequential. According to marine biologist Rohan Arthur, planners have pegged water consumption by tourists and locals at 170 litres/day. “The real numbers are higher. Locals use between 180-200 litres a day. A high-end resort might need as much as 600-700 a day.”

There are other impacts. Given the small size of these islands, NITI Aayog has proposed floating villas. It’s possible, said Arthur, that the solar panels set up to power these, will float as well. This comes with a second set of costs.

Reefs here are bleaching due to warming seas and acidification. “Given repeated climate change events, these reefs are eroding rather than accreting. The only place where corals are recovering is in the lagoons (the shallower stretch between the reefs and the islands),” said Arthur. The lagoons, he went on, also have sea grass meadows. That is where juvenile fish hide and grow – future stocks, in effect, for the local fisherfolks.

Now, between floating villas and panels, the quantum of sunlight into the lagoon might fall as well – apart from other effects like pollution – hurting both the corals and the meadows, further undermining the capacity of the atolls to rebuild themselves.

The Wire sent a questionnaire to Patel, his advisor A. Anbarasu, and collector Asker Ali, asking them, among other things, about the proposed scale of the tourism programme and other construction projects the administration is planning. By the time this article was uploaded, we hadn’t received a response. This report will be updated when they respond. 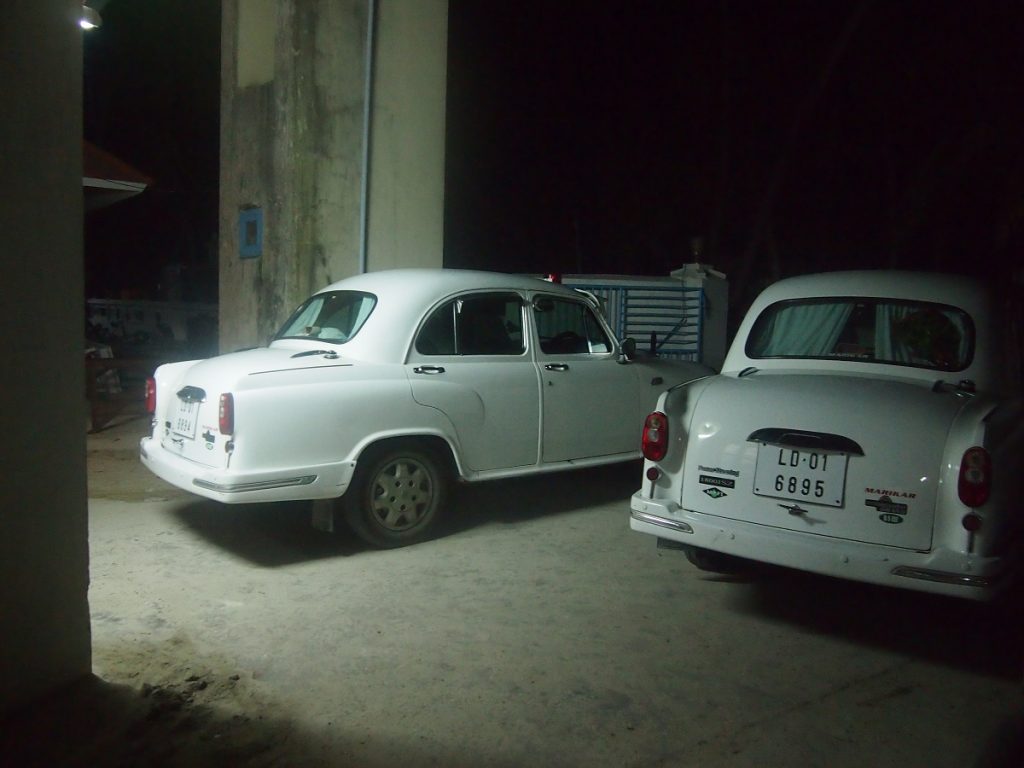 Both Andamans and Lakshadweep suffer due to local officials’ insistence on importing mainland practices. One instance? The ambassador cars bureaucrats use to get around Kavaratti, all of 3.93 sq km in size. Photo: M. Rajshekhar

Another question is how these plans will unfold.

Of late, two trajectories in India’s infrastructure sector have been especially striking. In the first, a few corner the market. In the second, we see a large flurry of interest, driven by irrational exuberance often created by consultants and government pronouncements, followed by a quiet dissipation as realism kicks in.

In the case of Lakshadweep, the archipelago produces little that can be used to erect a high-end tourism resort. Everything will have to be shipped in from the mainland. That will drive up costs. For freshwater supplies, resorts will need their own desalination plants. The ones already set up in Lakshadweep for the local community, said a scientist at the National Institute of Ocean Technology, cost anywhere between Rs 6 crore to Rs 11 crore. Installing such a system – and then maintaining it – will add to the costs.

Compounding matters, added the scientist, vessels do not ply to the islands between the stormy monsoon months, which means the project has to recover its investments running eight months each year. The question is how the cost of such a vacation compares with resorts in the Maldives or elsewhere – especially if their corals have not seen bleaching events yet.

This cannot work, said the scientist, unless the government is willing to give a lot of incentives.

Indeed, in the past, NITI Aayog’s island tourism push has not found many takers. We have to now see what happens in Lakshadweep.

The first of the tenders, for the eco-tourism resort at Bangaram, has already been released. Bids close on May 28. Others will follow.

It will be instructive to see how these fare.