From Kumram Bheem to the Koyas, Two Centuries of Land Alienation and Resistance by Tribals in Telangana

While the homes of Gotti Koya adivasis, migrants from Chattisgarh's Sukma, are being burnt by the forest department, the original Koyas of this area are losing their land to non-tribal settlers.

The villagers of Badhlapahad have not been paid their wages after working for the forest department. Credit: Javed Iqbal 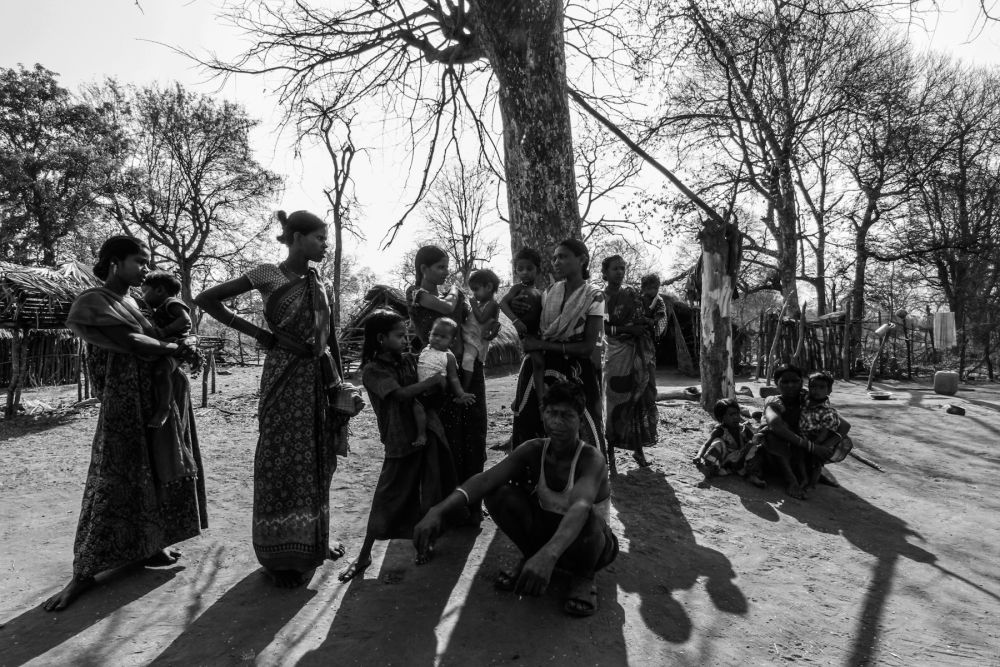 The villagers of Badhlapahad have not been paid their wages after working for the forest department. Credit: Javed Iqbal

In the newly-carved Jayashankar Bhupalpally district of Telangana, the forest department burnt down the seven-year-old village of Devanigutta that was settled by Muria or Gotti Koya adivasis who had migrated from the war-affected Sukma district of Chhattisgarh. This was the same week that the Sukma encounter, in which 25 CRPF men were killed, made national news and led to more clarion calls for stepping up the counter-insurgency.

On April 21, the forest department and the police entered the village, beat families, burnt all their possessions, broke their mango and mahua trees, burnt their bicycles and phones, beat their cattle, stole their goats, flattened their homes and told the villagers to leave the protected forest. This was one of just many incidents this scorching summer witnessed in the forests of un-divided Warangal. 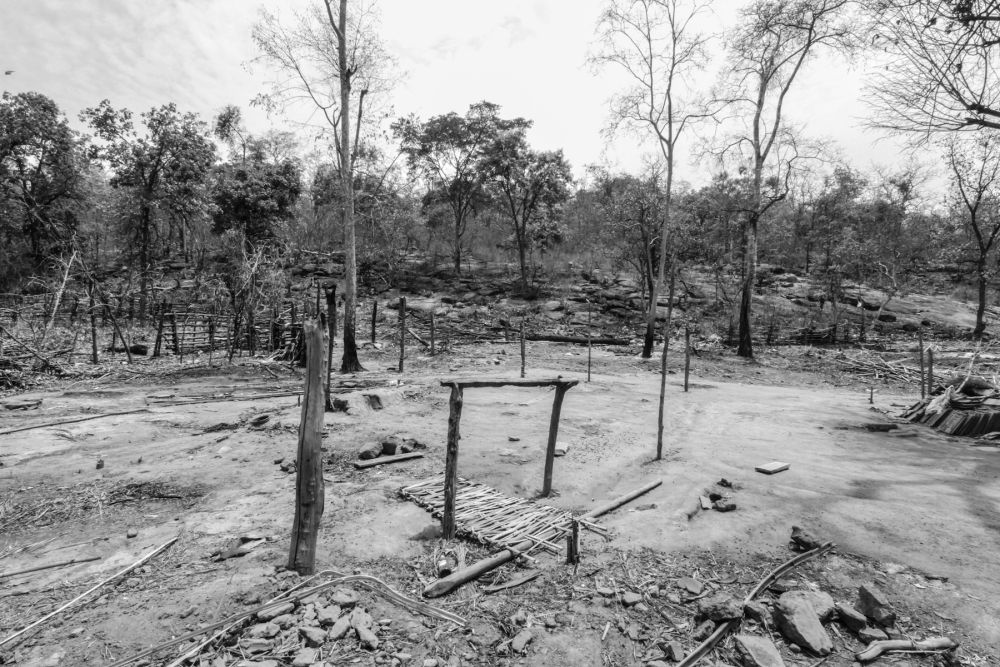 The scale of destruction is devastating, there isn’t a single house standing in Devanigutta village. Credit: Javed Iqbal 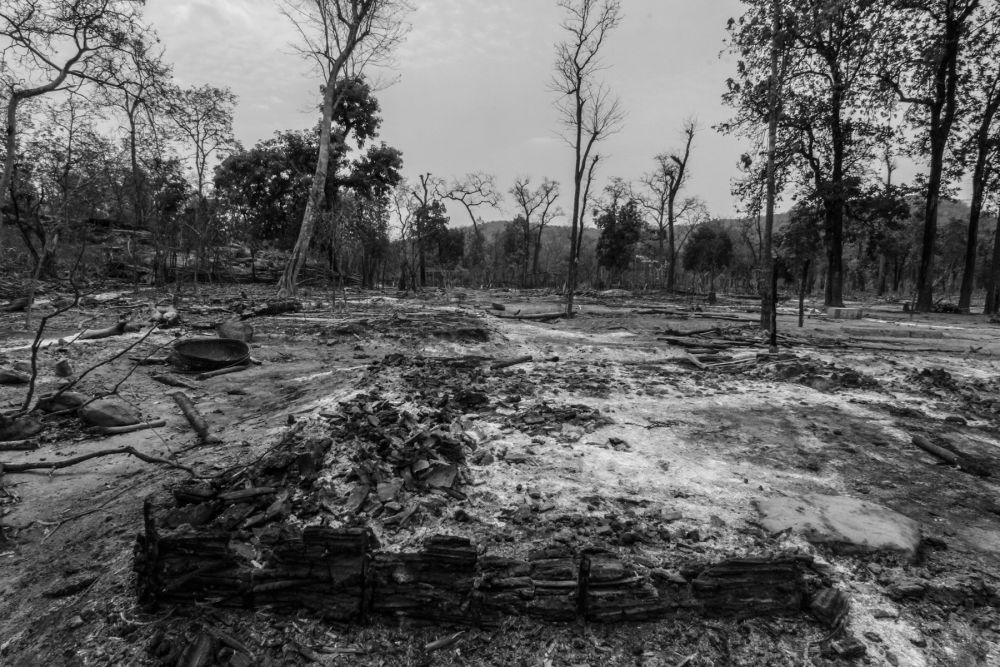 There are very few old people in the Devanigutta village, the older people have stayed back in Chhattisgarh. Credit: Javed Iqbal

In Maha Mathuram mandal, 37 houses were broken down in the Dudekullapalli forest, preceded a few weeks earlier by an incident in Koyagudem in Govindraopet mandal, where adivasis were picked up, forcefully taken across the Godavari in police vehicles and dumped at Vajedu in Khammam district. They returned to Koyagudem only to have their houses destroyed again.

In a strange twist of fate, while countless youth from Warangal left their homes and families in the 1980s to eventually become the leadership of the People’s War Group – who are now fighting, killing and dying in the forests of Bastar – the adivasis of Bastar have started to migrate in large numbers to the forests of Warangal.

This is not a new phenomenon. As Nandini Sundar points out, the borders between Orissa, Andhra Pradesh and Chhattisgarh have cut across traditional adivasi territories, and migration for land and marriage is not uncommon. During the peak of the Salwa Judum, however, from 2005-08, many people fled to Khammam and Warangal, to avoid being put into Judum camps. They were commonly referred to as internally displaced persons or IDPs. Even now, when conditions worsen in Bastar, villagers flee to Telangana. But there are also those who come predominantly for the land and labour.

Madkam Hunga was the first villager who identified the forest of Devanigutta and its small rivulet. He travelled for years looking for a home, trekking from village to village. When the collector, A. Murali, told them to leave the forest – even suggesting an alternative site, along with an offer of building materials – he replied, “You can cut my head, you can kill me, but I won’t go.” Hunga hails from Dudiras village in Dantewada district, and had attempted to settle in the Devanigutta forest earlier but was evicted and imprisoned. 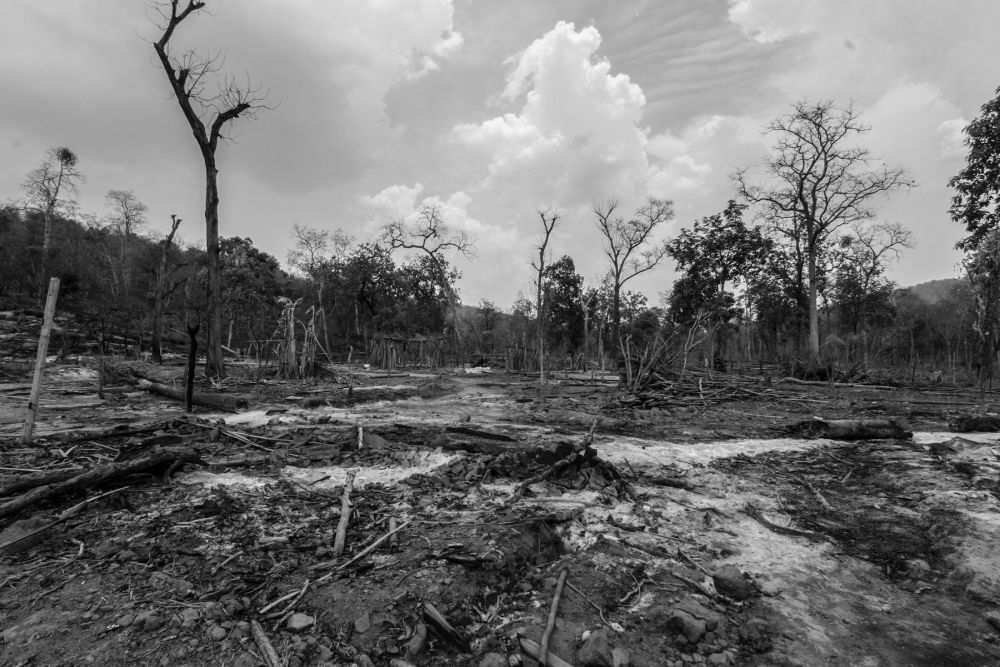 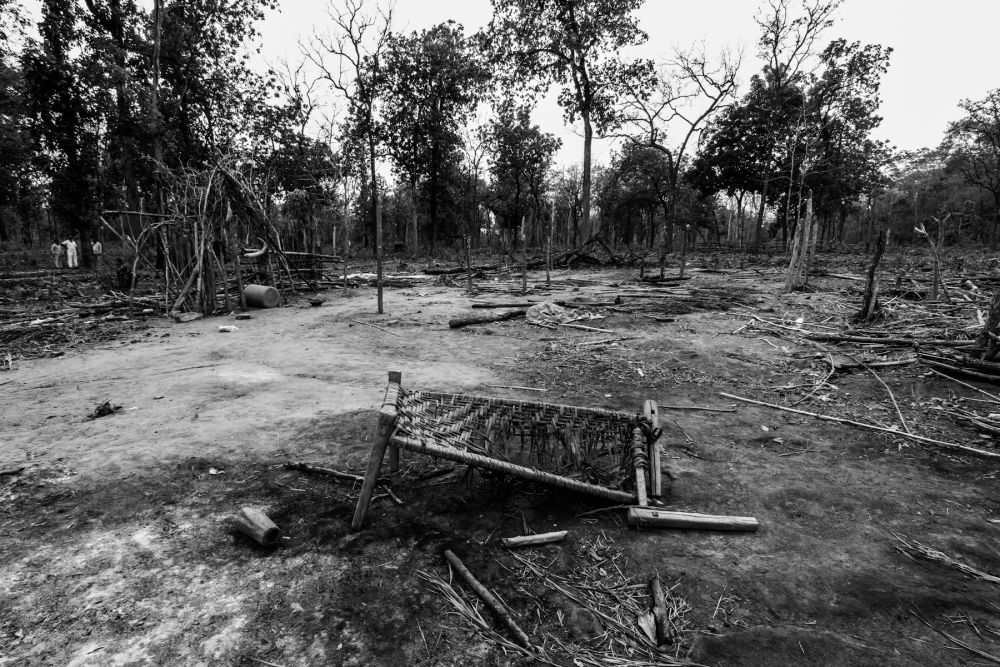 The scale of destruction is devastating, there isn’t a single house standing in Devanigutta village. Credit: Javed Iqbal

Murali, who was recently in the news for speaking against Brahminism and defending the diet of beef eating, the staple diet of the adivasis, feels the Gotti Koyas living in the reserve forest should be ‘mainstreamed’.

Hunga contests this, arguing that the forests of Devanigutta allow the adivasis to feed themselves, unlike back home in Chhattisgarh. The villagers with him enthusiastically list everything they live on from the local forests: rice, bananas, fish, bamboo, mahua, toddy; including several species for which I do not have English names: edkapandum, tumri, eedu, tora, kosu, matu, ethelpandum, munjar, nendi, pipal, paale, awalkusir.

Are houses being broken down because of wages?

The relationship between the forest department and Gotti Koyas is not always adversarial, sometimes it is of mutual benefit, although on terms that are by and large exploitative.

Across the district one comes across acres of teak and eucalyptus plantations, with rows of men and women digging at their roots to ensure water retention when it rains. A majority of those who are hired by the forest department are the Gotti Koyas. After a few years, the trees are cut down and sold for profit by the state. Sometimes locals joke that a plantation is the forest department’s equivalent of a cash crop. 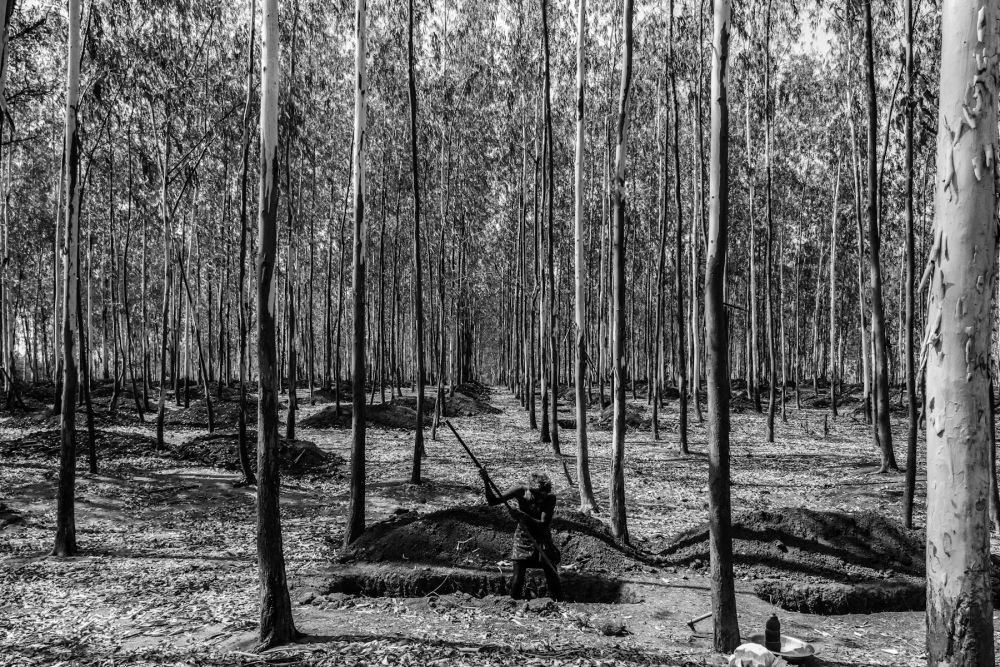 The landscape of Jayashanker Bhupalpally district is dotted with eucalyptus and teak plantations. Credit: Javed Iqbal

Ten-year-old village Bandlapahad in Venkatapuram Mandal has many Gotti Koyas from Neliguda village in Malkangiri and from Gunjapar village in Dantewada. Unlike the villagers of Devanigutta, they subsist on 150-200 rupees working for the settled villagers, in the houses of the Lambadas, Kapus and Golas. They walk 2.5 kms to get water and there is no electricity in their village.

The Gotti Koyas complain that, “It’s the Lambadas who go and tell the forest officials we are cutting the forest.” According to Mahesh Madkam, “In ten years, we’ve had the forest department attack us 15-20 times.” In 2004, they had initially settled for over a year in Laxmidevipet in Venkatapuram Mandal of Warangal. There were only ten to 15 families then, who had settled on private land, but they were evicted again. “They beat us then too, the police people,” said Deva Kovasi. 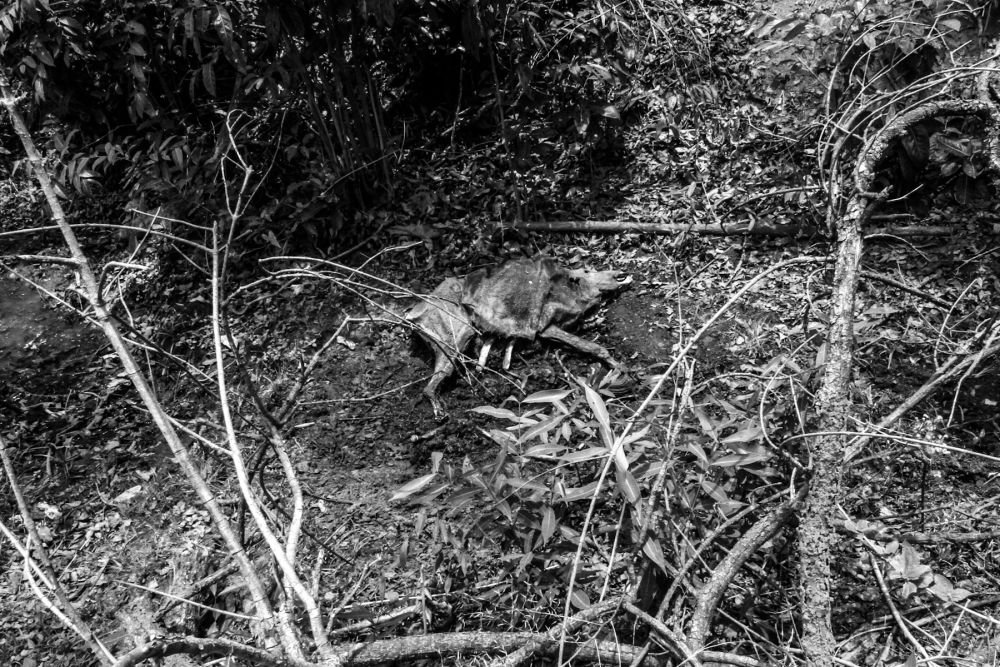 During the attack by the forest department and the police a young calf was killed after being beaten by the police. Credit: Javed Iqbal 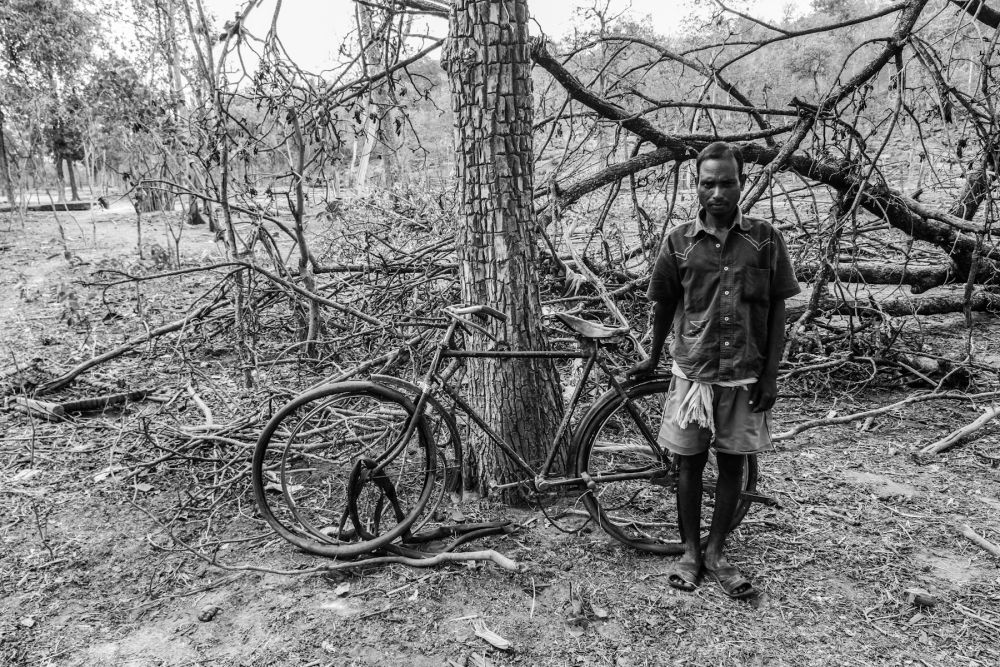 The officials also destroyed all the bicycles in the village. Credit: Javed Iqbal

During the monsoons, they work as daily wage labourers in the plantations for the forest department. The forest officials appear with tractors, and take around 40 people to work on plantations. “They promised us 150 rupees per day but they only pay 50-60 rupees and half the amount is not given,” said Madkam. 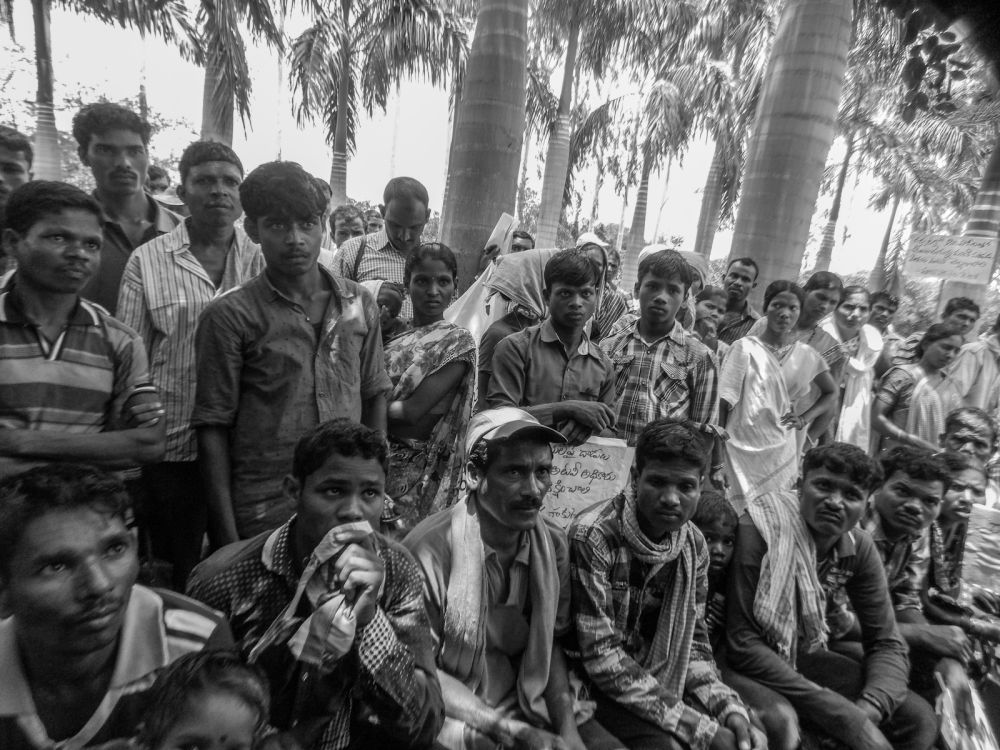 The Human Rights Forum submitted a memorandum stating: ‘It is true that the IDPs clear some forest to sow paddy as their principal source of sustenance but that cannot be described under any stretch of imagination as extensive deforestation.’ Credit: Human Rights Forum 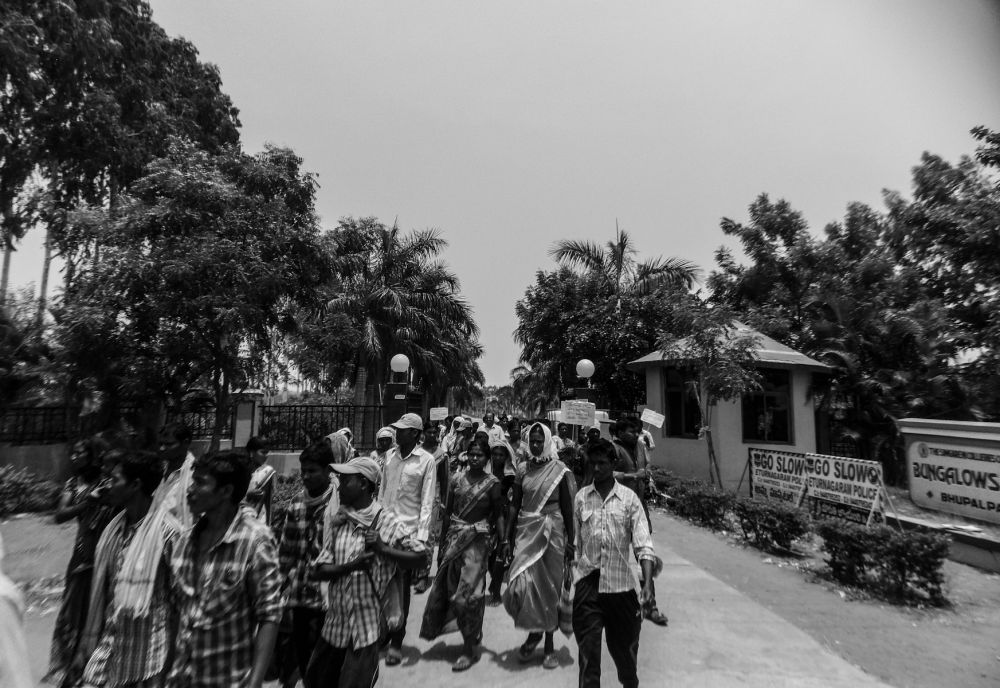 Over 150 Gotti Koya adivasis took out a protest outside the joint collectorate at Bhupalpally on May 15. Credit: Human Rights Forum

While the Gotti Koyas are being thwarted in their efforts to settle fresh land, the original Koyas of this area are also losing land to non-tribal settlers. In 2005, the late IAS officer J.M. Girglani submitted his report on ‘Tribal Land Issues in Telangana Area’ to the then government of Andhra Pradesh. Here are some of his findings on the loss of adivasi land to non-adivasis in Warangal.

Despite this, non-tribals are lobbying for further relaxation of laws that are meant for the protection of adivasi lands. Both the local Koyas and the Gotti Koya IDPs are under threat from the Lambadas who acquired ST status and even more powerful non-tribal settlers from what is now Andhra. 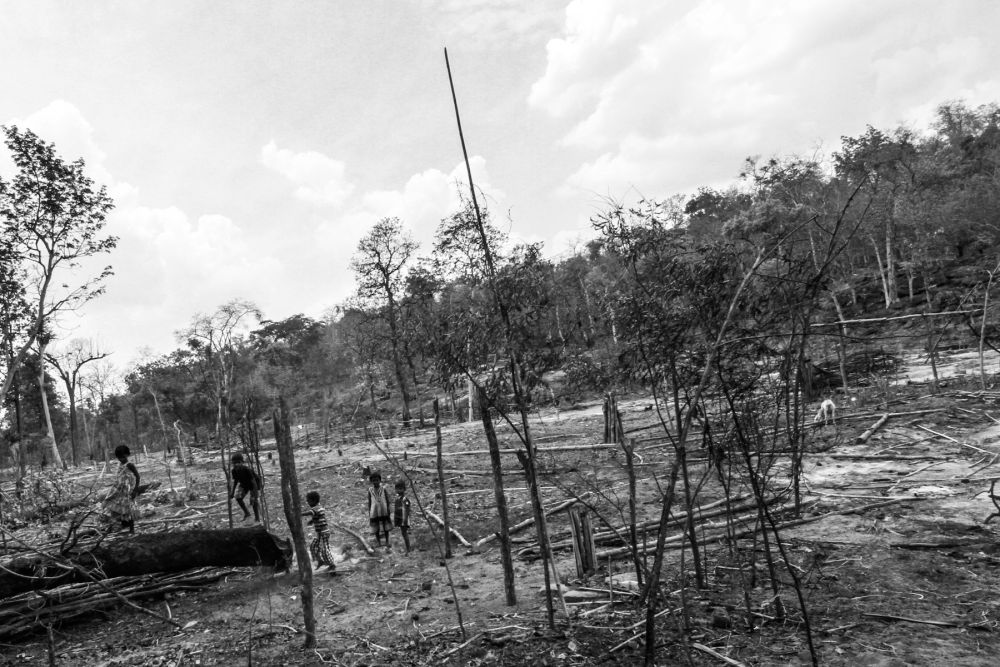 The politics of memorialisation

The Telangana government has started to recognise Kumram Bheem, even naming a district after him in Adilabad. Bheem was an adivasi hero and martyr, killed during the Nizam’s rule, who coined the slogan of jal, jungle, jameen. “All our children know about Kumram Bheem,“ said Kovasi of Badhlapahad. When I walked around and starting asking them, the children began to laugh. They said they overhear their elders speak about him.

But even as it honours Bheem as a freedom fighter, the Indian government and its forest department perpetuate the same colonial tactics on his descendants today. This year the Indervelli memorial meeting was not given permission by the administration. The Indervelli meeting is held in the memory of an incident which occurred on April 20, 1981 where the police opened fire on a public meeting on, killing dozens of Raj Gond adivasis. Till date the number of people killed is disputed.

Of what will the future oral histories of freedom be crafted?

Note: Nandini Sundar is married to one of the founding editors of The Wire.