PG and MPhil students, including women activists, were produced in court with ropes tied around their waists. Seven of them continue to be in custody. 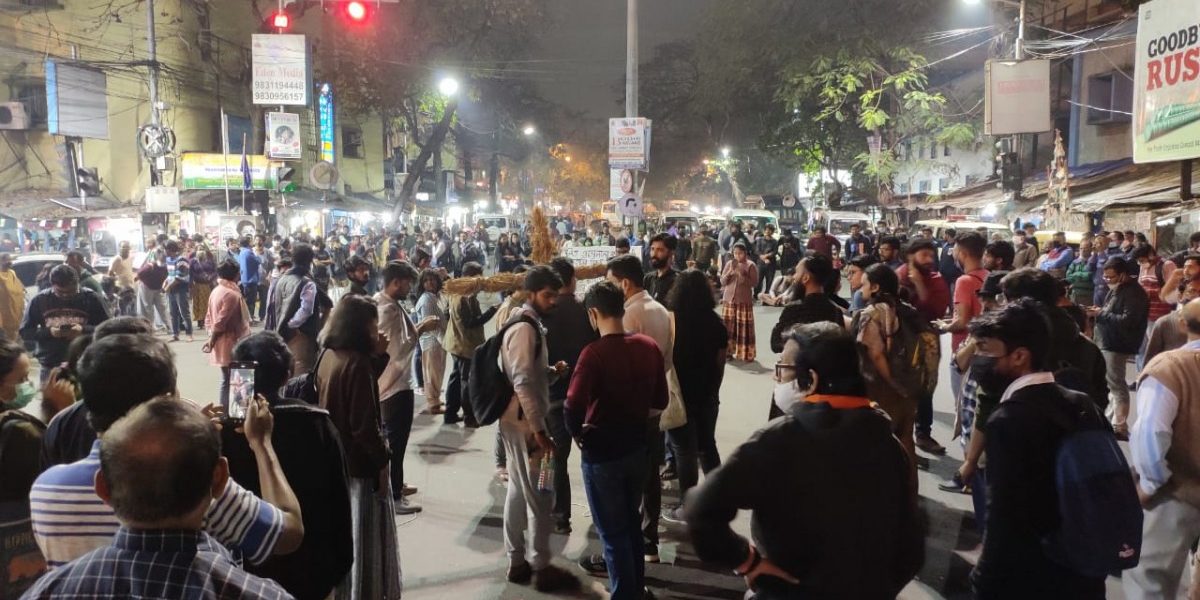 Kolkata: Nine present and former Jadavpur University students — all members of CPIML (Liberation)’s student wing All India Students’ Association (AISA) — were arrested and allegedly severely beaten up on the night of February 7 by police at Narendrapur on the southern fringes of Kolkata, when they were holding a deputation against police action against a Dalit civil society activist.

The students were protesting against the detainment and questioning of Dalit civil rights activist Sharadindu Biswas by Narendrapur police on February 4, which they felt amounted to ‘harassment’ and a curb on the freedom of expression.

Biswas had made two posts on Facebook on February 1 and 2 calling for banning of all kinds of religious rituals in government-funded educational institutions, including Saraswati Puja, and encouragement of scientific temper among students. The posts quoted passages from Hindu mythological texts.

On the morning of February 4, Biswas received a call from the cyber cell of police asking him to remove the post, which he did. Around 12.30pm a team from Narendrapur police station came to his house.

Also read: It Is the Need of the Hour To Understand Police Brutality in India and Take Action

“They searched my desktop computer, rummaged through my books and photographs and seized my phone. At the police station, the inspector in-charge spoke to me for barely 30 minutes. But I was made to wait for seven hours. Apart from that I was treated decently by the police,” Biswas said.

“The inspector in-charge (IC) asked me why I had been posting anti-Hindu content on my page. I told them if one went through my work in totality, one will find that I write/protest against all kinds of religious dogmatism and call for propagation of logical and scientific attitude among citizens as proposed by the constitution. Before letting me go, they eventually agreed that I had a clearly secular stance in my activism,” he added. CPIML (Liberation) West Bengal state committee member Chandrasmita Chaudhury said political and civil society organisations like AISA, All India Progressive Women’s Association, Association for Protection of Democratic Rights and Ekushey-r Dak had called for a rally and procession at the city’s Kamalgazi crossing on the afternoon of February 7, against this police action against Biswas.

She alleged that as soon as the meeting started, the police descended upon and started beating up the activists. Two of them, Rudra Prabhakar Das and Akash Gupta, were particularly targeted. Six protesters were arrested and later released on personal bond.

“Students of Jadavpur, who had gathered in solidarity, were saluting the released comrades with slogans. As soon as the slogans were raised, the comrades were again assaulted. Eleven protesters, including myself, were arrested this time. We were verbally abused and misogynist slangs were used against women protesters. Women were kicked when they refused to give their phone’s password. All the protesters were brutally beaten up. Police officers even threatened to shoot them inside the lockup. Me and another comrade, Moloy Tiwari, were released late at night,” Chaudhury said.

The other nine were taken to Baruipur court on February 8 with ropes tied around their waist. Their bail pleas were rejected. They were again made to appear before the court on February 9. Two women activists got bail. Seven other PG and MPhil students continue to be in jail at the time of publishing this report.

Soumi Jana, one of the activists released on bail, said, “Male police officials repeatedly hit me on my chest and abdomen with lathis. When I protested they beat me up even more and asked me that if I was conscious of my modesty, why had I been hugging my male comrades earlier when police were beating us up. One of them dragged my legs and ordered the other to hit me between my legs. At midnight I felt symptoms of my urinary tract infection and felt extremely unwell. A male official clad in shorts and vest asked me if I was a drug addict. There was one woman official named Neha who repeatedly taunted me for my appearance and skin colour.”

Jana appeared severely traumatised while speaking to The Wire.

The students were charged under various sections of the IPC including rioting, obstructing and assaulting or using criminal force to deter a public servant from discharge of his duty, voluntarily causing grievous hurt, criminal intimidation and intending to insult the modesty of any woman. Chaudhury said while producing the students in court, police said they had forgotten to bring the case diary.

An AISA press release said “The police brutality on the night of 7th February is a reflection of the authoritarian outlook of the West Bengal police under TMC administration.”

Speaking to The Wire, IIC-Narendrapur Anirban Biswas said, “We had brought Biswas for questioning since the post had already gone viral and created a bit of tension. I spoke to him in my office. When we pick someone up, we need some time to run a background check on him. This is routine police work. That’s why he had to wait.”

Police claimed that at first some civil rights workers took out a procession against the police action on Biswas. Since “they had not sought permission, three or four of them were arrested under Disaster Management Act” and were released within hours from the police station against personal bonds.

“When they were being released, another group of students started agitating outside the police station with slogans and loud music. I repeatedly requested them and in fact, literally begged to them to end their demonstration. There was a wedding going on in the same building where the police station is presently located. Because of them, the wedding party could not enter. Cars were stuck on the road. When officers went close to them, an SI and a lady constable was assaulted by the students, both of them were pushed to the ground. That is when we arrested them,” Biswas said.

Biswas said he had no knowledge of students being produced in court tied in ropes, as the court was in Baruipur but said he would look into the matter. He vehemently denied the charge that bail was not granted because police forgot to bring the case diary, as alleged by the activists.

Soumi Jana categorically refuted this. She said the students were tied with ropes at the police station at the order of the IC himself. On their way to court they were made to sit on the floor of the prison van.

“Students have been at the forefront of ideological resistance to the fascist offensive and the Indian state therefore seems to be targeting student activists, especially young women students, with a vengeance. The Narendrapur incident is the latest instance of this alarming trend. Mamata Banerjee had famously used the ‘komore dori bendhe tana’ (tying ropes around the waist — a colonial era practice for people in police/jail custody) expression for the communal forces, but these are Jadavpur University students who were produced in court with ropes tied around their waists. The West Bengal verdict in May 2021 was an emphatic mandate for democracy and the Narendrapur-Baruipur episodes make a total mockery of the spirit of that mandate,” he told The Wire.