After the police denied the allegation, the journalist shared a photo of her father's bruises on Twitter and said she sees the incident as an attempt to muzzle her voice. 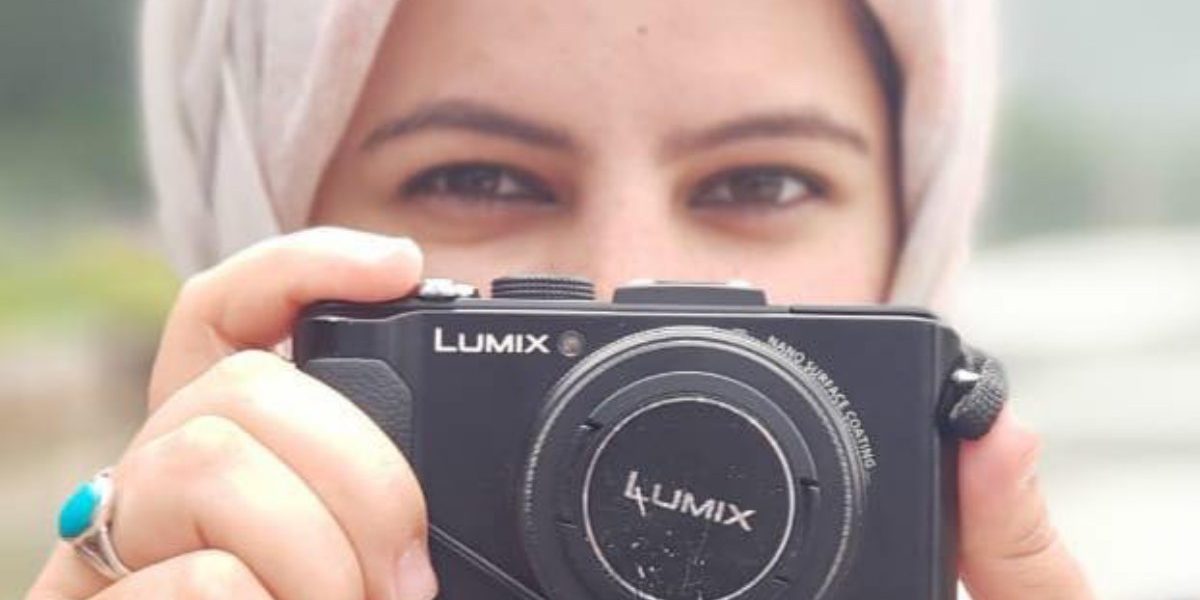 Srinagar: A young Kashmiri photojournalist, who is currently based in Germany as a “politically persecuted” person, has accused the Jammu and Kashmir Police of targeting her parents because of her work.

Masrat Zahra, 27, the 2020 recipient of the Anja Niedringhaus Courage in Photojournalism Award, tweeted pictures of injuries suffered by her father Mohammad Amin Dar, a retired driver, on Twitter, accusing the police of assaulting him.

In the picture, Amin can be seen holding up his bruised arm to the camera.

Zahra said that she was forced to post the pictures after the police had denied her claims.

Posting the picture of my father who was thrashed by police. One can clearly see his bruised arm. I didn’t want to post these pictures but yesterday’s police statement is ridiculous and they cannot thrash people in the day and at the end of day when questioned deny the thrashing. pic.twitter.com/TM6wzEXUdO

Speaking with The Wire from Hamburg in Germany, Zahra alleged that her parents were being targeted because of her work.

“The government doesn’t like my work because it exposes the false narrative of ‘peaceful’ Kashmir. Now they are targeting my parents to silence me. But for me, silence is not an option,” she said.

Last year, the J&K Police accused Zahra of “glorifying” the militancy through her posts on social media and she was booked under Section 13 of the Unlawful Activities (Prevention) Act (UAPA) and Section 505 of the Indian Penal Code by the cyber police station in Srinagar.

The anti-terrorism charges against the young, ambitious journalist who says she wants to “tell the story of my people” through a feminist perspective, brought attention to her work which focuses on women and children in conflict.

Nearly 450 gender rights activists, scholars, professionals and civil society organisations had issued a statement to condemn the UAPA case against Zahra, asking the police to withdraw the “preposterous and far fetched charges” against her.

Besides the Anja Niedringhaus award, Zahra, whose work has appeared in the Washington Post, New Humanitarian and Al-Jazeera among other prominent publications, was also awarded the Peter Mackler Award for Courageous and Ethical Journalism last year. 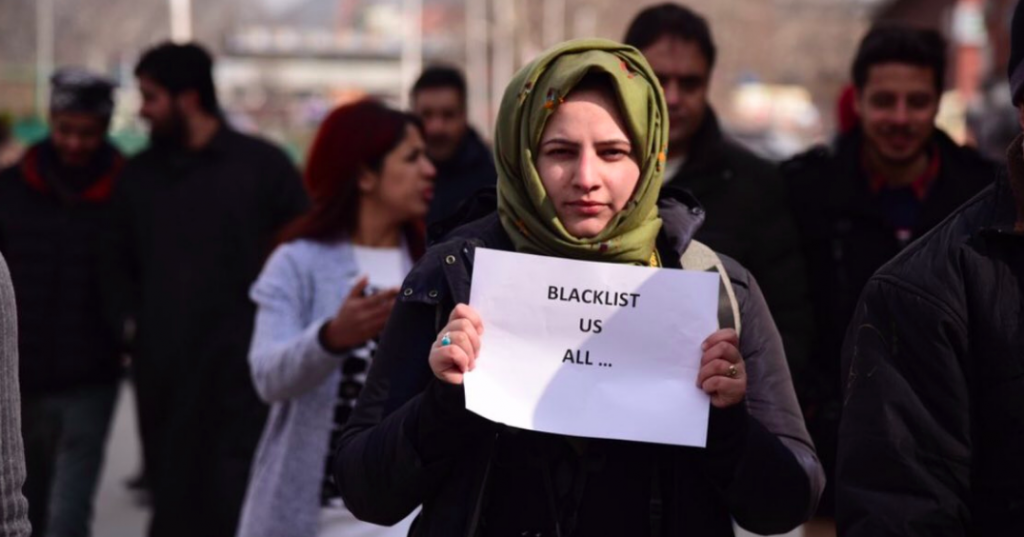 On July 25, Zahra’s father Amin and mother Fatima were looking for an auto-rickshaw on the main road in Srinagar’s Batmaloo locality, when a party of five-six policemen pulled Amin aside for not wearing a mask.

Amin has alleged that when he confronted the cops, as they were not wearing masks themselves, he was roughed up without provocation. When Fatima, tried to intervene, Amin said she too was manhandled.

The police, however, deny the allegations.

Aijaz Ahmad, the chief of Batmaloo police station, has accused Fatima of using “abusive” language against the policemen. “They were walking past a checkpost where we were seizing motorcycles. Her mother used some abusive language, that the police are oppressive, that we have seized so many bikes because our rations have finished and we will demand money,” he said, according to Newslaundry.

Ahmad said that he had instructed the policemen to seize Amin’s ID for ‘verification’. He claimed that Fatima’s actions should be seen in the context of the family’s ‘background’, referring to Zahra’s work. According to Newslaundry, he accused Zahra of being “anti-state”.

“If we knew that they were provocative with this background and that’s why they were doing it, we’d have dealt with them accordingly,” Ahmad, who is officially not authorised to speak with the media, told the news website. He accused the family of ‘planning’ the allegations of assault, since they want to be in the news.

Responding to these comments on Twitter, Zahra said that the police has admitted that “families of journalists who report ground reality of Kashmir will be dealt [with] differently“.

Reading the police statement, anyone can concur how police sees me a threat to state for mere doing my professional work as a journalist and now I fear for the safety of my parents and other family members.

The Wire sent WhatsApp messages to inspector general of police (Kashmir) Vijay Kumar about Ahmad’s comments on the issue. While he has checked the messages, he has not replied to them.

Senior superintendent of police, Srinagar, Sandeep Chaudhary, was also reached but he too did not comment. The story will be updated if a response is received.

From Kashmir to Germany

Zahra went to Germany in March this year on the invitation of the Hamburg Foundation, a non-governmental group. The foundation works to “prevent the horrors faced during the Nazi regime”, when people “were persecuted, tortured, or murdered for political, religious, or racial reasons.”

The advocacy group brings together people from across the world “who dare to advocate human rights, the freedom of speech, and the rule of law.”

Hailing from the Hawal locality of downtown Srinagar, Zahra studied journalism at the Central University of Kashmir. She shot to prominence in 2018, when a photo that was circulated on social media described her as a mukhbir, or a ‘collaborator’ of the security forces.

The image, shot by one of her colleagues, showed Zahra moving among Army officers during an anti-militancy operation in South Kashmir. The photojournalist had suffered injuries during the assignment.

A poster circulated on social media, purportedly issued by the Hizbul Mujahideen, said she was “Among the Journalists on the Payroll of Indian Agencies (sic).” The Hizb, however, denied any role in making the poster.

“I was terrified because it was around this time that Shujaat Bukhari was assassinated after a similar campaign accused him of being a ‘collaborator’,” she said, adding that her colleagues had warned that she was “on the radar of the security agencies”.

Zahra realised that being a woman photojournalist in a conservative society such as Kashmir was not going to be easy. Initially, even her parents had objected to her choice of profession.

As her work started getting recognition, the troubles only grew – such as the poster and the UAPA case. Though she is now in Germany, these troubles have followed her.

“I want to focus on my work. I have a long road to go. I was not feeling safe in Kashmir. But now I am equally concerned for my parents because they don’t feel safe either,” she said.

“After I left Kashmir, my young cousin died. Then one of my best friends suffered a heart attack and she died too. Recently, my grandfather also passed away. I am feeling horrible and depressed,” she said.

Zahra said the alleged assault on her parents and the subsequent “threat” of the local police officer has brought back the memories of the trauma she had to go through last year, when she was booked by under the anti-terror law.

“I feel like nothing has changed in my life. It’s a repetition of the same tactics by the state – threats, intimidation, harassment, if not me, then my family. They are trying to muzzle my voice,” she said.

The young photojournalist said the latest episode with her parents has left her traumatised. The one-year programme sponsored by the Hamburg Foundation is going to end in March next year, but she is uncertain about her return to Kashmir.

“I am being targeted because of my identity as a woman and also because of my work, which focuses on the brutalities faced by women and children in Kashmir. If I go back to Kashmir, I feel the government may not allow me to leave the country again,” Zahra said.

“My work exposes the false narrative of peace that the Indian government is trying to manufacture in Kashmir. They (the police) think I am doing this to win awards. But I will let my work do the talking,” she said.

The Network of Women in Media (NWMI), has expressed “outrage at the harassment and violence meted out to the elderly parents” of Zahra.

“Such harassment of vulnerable family members is an abhorrent strategy of intimidation that must be strongly condemned,” the statement said.

“The intimidation continued in the shape of stalking and surveillance by unknown persons, making it difficult for them to seek immediate medical help,” NWMI added.