For Drivers in Kashmir, Livelihoods Come to Abrupt Stop

Since the decision to revoke the state's special status, work has been hard to come by as tourists are scarce. Srinagar: Every morning in Chanapora area of uptown Srinagar, Majid Ahmad Khan steps out of his house to take a stroll around the neighbourhood. The 31-year-old, a maxi cab driver by profession, leaves home in the hope of seeing a “better situation”. However, for the past ten weeks, he has returned home disheartened and worried.

Khan has been unable to find work since August 5, when the Government of India stripped Jammu and Kashmir’s special status and diluted Article 370. The state was also divided into two Union Territories, and a clampdown was imposed on the Kashmir Valley.

Khan has devised a routine around his Tata Sumo cab. Every day, he dusts the vehicle, parked in the courtyard of his house, and starts it – fearing that the battery would drain otherwise. Sometimes, he takes his two-year-old daughter, Tazkiya, for a ride around the colony and then goes back into his house.

“What else can I do in the current situation?” he wonders. “At least by switching the vehicle on and taking my only daughter for a ride, I pass time. Otherwise, I feel frustrated at home.”

Khan had dropped out of graduation to support his family’s income. He has been working in the transport sector for the past five years and looks after his family of seven. Khan is upset with the continuing restrictions, saying that in Kashmir, the transport sector is always the first victim. “Whenever the situation turns bad, we are the first causality,” he says.

He says he usually earns between Rs 900 and Rs 1,100 every day. He earns more during peak tourist season, which has already passed.

The onset of winter is cause for more worry. “I won’t be able to earn much due to the weather. The situation is very difficult. No one can actually imagine the life that we are living here. Sometimes, I wonder how we are dealing with this,” he says.

Sometimes, the illusion that the situation is normal sets in, Khan says. “Then, suddenly things get bad in many areas,” he says. Many times, he considered resuming his work, but the circumstances did not seem right.

Also Read: This Kashmiri NGO Is Helping Men and Women from Poor Families Get Married

After ten weeks without work, Khan is draining out his savings.

Now, Khan struggles with the dilemma of choosing between making ends meet and looking prioritising his safety. “If I go to work, there are chances that I might end up in trouble,” he said. “Sitting at home, I have lost opportunities to earn money during the tourist season.”

Like Khan, Mohammad Ayoub Dar – another maxi cab driver – also began to find it hard to make ends meet. The 47-year-old, a resident of Pakaharpora area of central Kashmir’s Budgam district, picked up the courage to resume working on October 2.

Sadly, on the very first day of his work, a stone hit his vehicle, damaging the window pane. “I lost whatever I earned that day to repair the cab,” he says, halted at the Batamaloo taxi stand and calling to passengers. Damage sustained by a cab after it was hit by a stone. Photo: Kaisar Andrabi

In the Kashmir division, there are about 35,000 registered maxi-cabs. Ghulam Nabi Pandaw, the president of the maxi cab taxi stand union in Lal Chowk that all these cabs have lost business because of the shutdown.

“35,000 families are depending on this business. Owners, drivers and everyone is facing hardships,” he said. “On average, a driver earns Rs 1,500-1,800 per day. Since the shutdown, most of them haven’t earned a single penny.”

Pandaw, 68, holds the Centre responsible for the loss. “Article 370 was crucial to Kashmir. Until this decision is reversed, the situation will not get any better and businesses will continue to face losses,” he says.

Pandaw also laments that they cannot speak up about the decision. “With whom do we talk? The ones who could talk [political leaders] are in jail.”

Among the other worries that the drivers have is depositing the monthly instalments of loans they have taken from banks to purchase their vehicles.

Ishfaq Majeed Koul, 33, lives on the outskirts of Srinagar, in Tengpora. He is worried that he won’t be able to deposit the September instalment of loan payment at the Shri Ram Bank. Koul, who drives a Toyota Innova, which he had purchased in 2015 is finding it hard to get work.

“I have to pay Rs 13,000 as a bank instalment for the outstanding amount of rupees Rs 2.5 lakh. Since the clampdown, I have not earned a single penny. Whatever savings I had have run out over the past 70 days. Now, I need to sell a gadget or borrow more money from someone to pay the bank or they may seize my vehicle,” he says. 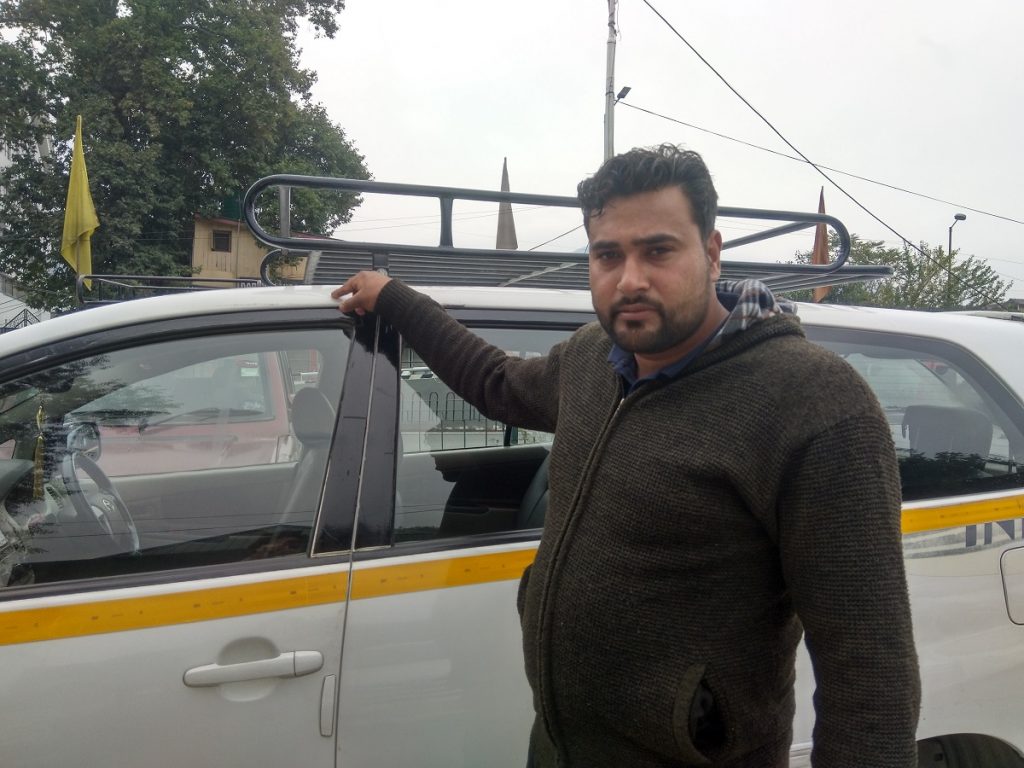 Standing next to him is 42-year-old Mukhtar Ahmad Shiekh, who has been in the taxi-cab profession for the fourteen years. Of his five family members, Sheikh says his elder son’s health condition is deteriorating. “Sometimes, I had no money to buy his medicines. Imagine the helplessness of a father in this situation,” he says.

In 2017, he borrowed money to buy a Chevrolet Tavera. “I took a loan of Rs 5 lakh from the Jammu and Kashmir Bank. Without any tourists, I am sitting idle. I am not just worried about home expenditures, but also about paying two months’ loan instalment worth Rs 31,000,” Sheikh says.

Also Read: Magistrates Will Now Watch Over Kashmir Schools, While Police Wait Outside

A majority of the drivers blame all their hardships on the government. A driver at the Lal Chowk taxi stand, frustrated by the shutdown, says, “The government should come and burn all of our vehicles. That would have been a better decision, rather than pushing us into darkness.”

The drivers’ mood is in stark contrast to the Centre’s proclamation that the revocation of the special status would bring prosperity and development to the conflict-ridden region. They say that the move has not only hurt their business, but has also pushed them into facing their toughest times.

Another driver, Bashir Ahmad Magray, of South Kashmir’s Pulwama, said that he will soon need to renew his cab’s insurance. “Without any earnings for the past ten weeks, how can I pay it now?” he asks.

Most cab drivers said that as the year nears its end, they will have to renew insurance, fitness and many other documents. “Will anyone help us in paying for these renewals? We have been caught in the middle of a storm,” Sheikh sighed.

Spike in tourists before August 5

Talking about how Kashmir’s economy is closely connected with tourism, the drivers say that this year, the footfall until July was quite high, more than previous years. According to figures released by the tourism department, the footfall of tourists in June this year was 27% higher than the previous year, at about 1.62 lakh (excluding Amarnath pilgrims).

Days before the Centre announced the decision to dilute Article 370, the government asked tourists, including Amarnath pilgrims to leave the Valley. This, and the continued clampdown, may have discouraged tourists to visit the Valley.

Talking to The Wire, the deputy director of Jammu and Kashmir tourism department, Riyaz Ahmad Shah, stated that despite the continuous process to promote tourism, “the current circumstances are restraining people from visiting.” He could not give an estimate of the losses suffered by the tourism industry.

Also Read: Centre Said It Was Bringing Jobs to J&K. Instead, It Has Brought More Unemployment

Sheikh, the cab driver, bemoans that before the state’s special status was revoked, the situation was comparatively calmer. “Shutdown calls were less. But, the government’s decision affected everything and hit the tourism sector drastically, that ultimately, hit us hard,” he says. “The tourist season had just begun and we were expecting more to come.”

After a brief pause, Sheikh looked at the long line of vehicles parked in the tourist maxi cab stand. He said, “This placed used to buzz with tourists. It was a place where hundreds of us earned our livelihoods. But now, it looks like a graveyard – silent. Isn’t it?”