Naseema Bano, a sarpanch, sees no option but to jump into the poll fray to secure the release of her husband Abdul, jailed on August 5. 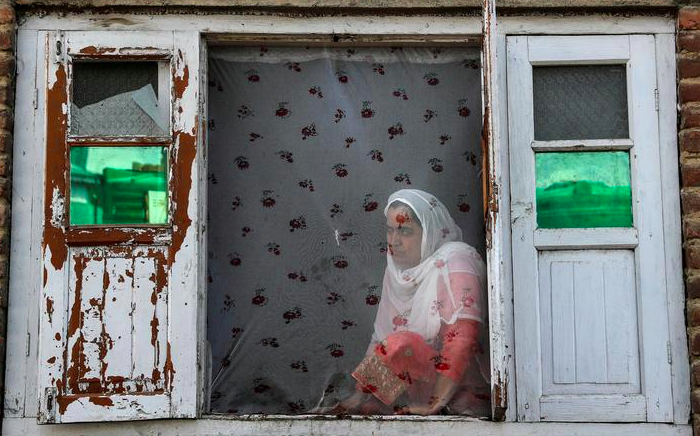 Representative image of a Kashmiri woman looking on as protests take place in Anchar on September 20. Photo: Reuters

Srinagar: A woman from a remote village in the frontier Kupwara district is contesting the Block Development Council (BDC) polls in Kashmir so that she can raise her voice for the release of her husband who has been jailed under the controversial Public Safety Act (PSA).

Forty-one-year-old Naseema Bano from Shatigam village of Rajwara panchayat block has been campaigning since October 9 for the simple purpose of getting her husband released.

A chairperson candidate, Naseema has filed as an independent.

Her husband Abdul Hamid Khan, a village headman and supporter of the Sajjad Lone-led Peoples Conference was arrested on August 5, hours before New Delhi announced the decision to read down Jammu and Kashmir’s special status.

“My mother is contesting the election with the hope that if she gets elected as chairperson her voice will be heard and my father will be released from jail,” said Faheem Hamid, Naseema and Abdul’s son.

According to Hamid, J&K Police raided their house at around 6 am on August 5 and took him away “without saying anything to us.”

Also read: The Kashmir BDC Polls Are of the BJP, by the BJP and for the BJP

Abdul was first lodged at a local police station. But on August 23 he was shifted to Srinagar’s Central Jail, where he remained for three weeks.

“Finally, he was booked under the PSA and moved outside state, to the Central Jail in Agra,” Hamid said. “We travelled to Agra and met him once.”

Under the PSA a person can be jailed without trial for up to two years. National Conference leader Farooq Abdullah is also booked under the Act.

Abdul’s leader, Sajjad Lone, meanwhile, has been detained at a local hotel in the summer capital of Srinagar. Authorities say the hotel has been turned into a sub-jail. The authorities have not disclosed under which law Lone has been detained.

Apart from Lone, at least 35 mainstream politicians from various parties are detained at the hotel.

Hamid said Abdul’s PSA dossier mentions he was detained in a case dating back to 2013 related to a dispute over construction of hospital in the area.

“My father worked for the government. My mother is a sarpanch and is contesting the BDC elections. We all work for government of India even today, but still my father remains jailed,” said Hamid. Naseema had been elected sarpanch in the panchayat polls conducted at the end of last year.

“This is total injustice. What was my father’s crime? He has been in mainstream politics for 25 years.”

Fearing backlash over the reading down of Article 370 of the constitution, and the bifurcation of the state into two Union Territories, the government, in an unprecedented crackdown, arrested or detained hundreds of politicians – including three former chief ministers – lawyers, businessmen and separatists.

More than 300 of those detained were booked under the PSA and send to jails outside the state, including Abdul.

Helpless, Naseema embarked on her campaign earlier this month.

“My mother feels she will secure her husband’s release only after getting elected as BDC chairperson,” Hamid said. “She is a woman on a mission. She rarely calls home to enquire about our well being.”

Most of the panchs and sarpanchs from rural Kashmir, who form the electoral college for the BDC polls, had been shifted to Srinagar over alleged security concerns.

They have been put up in various hotels guarded by police and paramilitary personnel. Some of these panchayat members had moved along with their families.

However, ever since the government announced the BDC polls, these panchs and sarpanchs have moved back to their respective panchayat blocks for campaigns.

Naseema’s main adversary is another woman, also an independent candidate. The Rajwara block has 131 panchayat members including 161 panchs and 15 sarpanchs.

The BDC polls are scheduled to be held on Thursday (October 24) and have been boycotted by all mainstream parties except BJP.

With their leadership detained, National Conference and Peoples Democratic Party citied the ongoing uncertainty across state as the reason for boycotting elections.

Congress, which was earlier in the fray, decided in a last-minute move to withdraw from the contest

The boycott has made the polls a direct contest between BJP and independent candidates in Kashmir.