The Tempest: An Evaporation of Fear in Kashmir 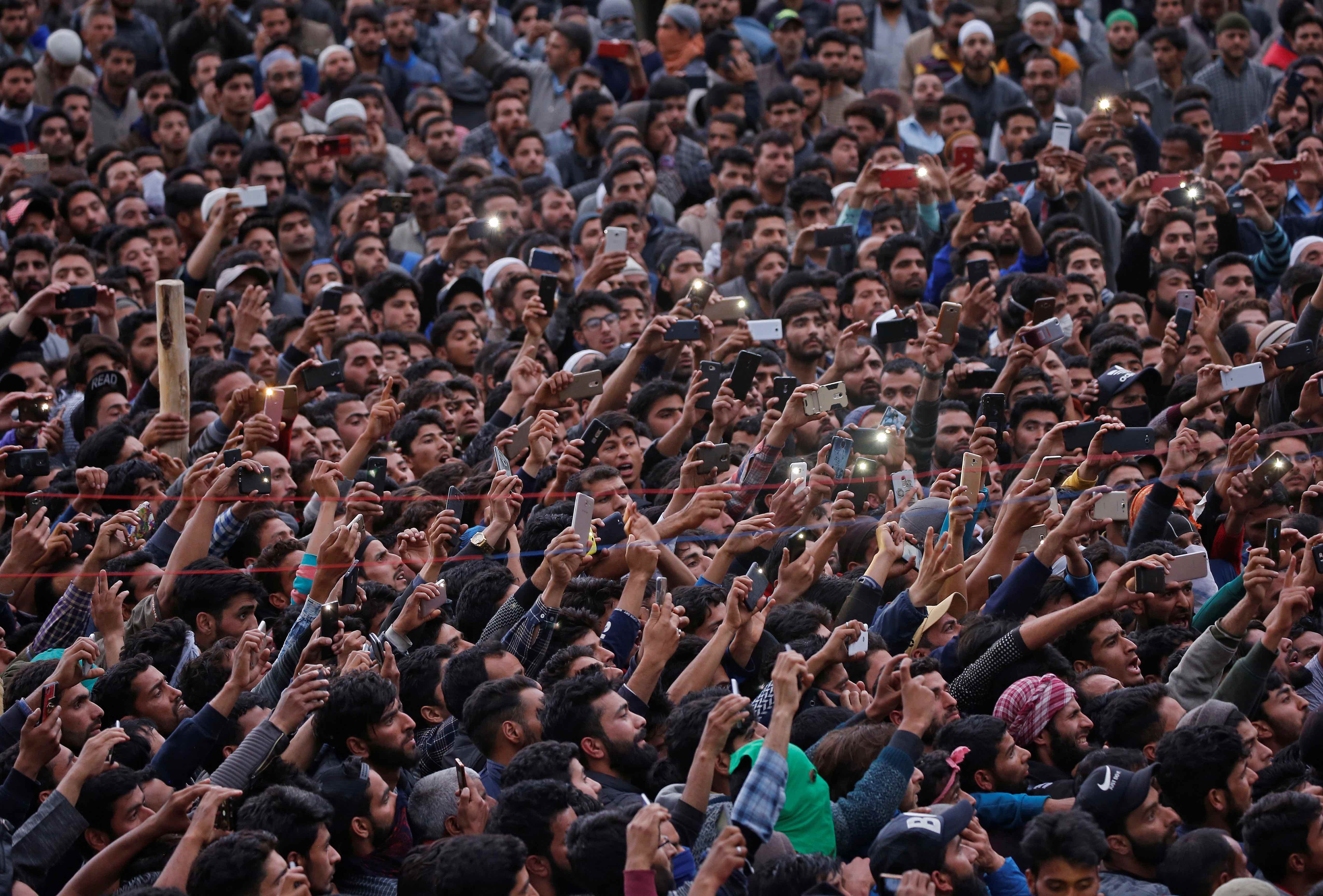 People use their mobile phones to take photographs of the body of Kashmiri professor Mohammad Rafi Bhat, a suspected militant, after he was killed in a gunbattle with Indian security forces in south Kashmir, during his funeral procession at Chunduna village in Ganderbal district May 6, 2018. Credit: Reuters/Danish Ismail 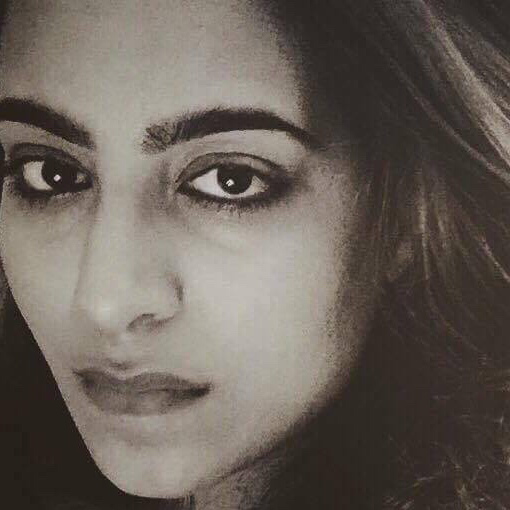 The nature of time in Kashmir – long and repetitive – is often deemed a cyclical curse. But unlike the unchanging recurrence of travelling in circles, it has begun to take the shape of a shrinking spiral, in which the space for survival is tightening, as each spin of violence turns more dense. As the Modi government played pause this week, declaring a “Ramzan ceasefire” in its military operations against militants in order to “isolate the forces that … [resort] to mindless violence and terror,” it merits attention to revisit the true “forces” and origins of that “mindless violence and terror.”

Almost two weeks ago, on a Saturday morning, after the armed forces killed three militants during a gun battle in an area on the outskirts of Srinagar, protests erupted. Clashes between civilians and the forces ensued, and an 18-year-old was killed on the spot. The following day, there was a repeat: the armed forces first killed five militants in an encounter, and later killed five civilians as they protested. By the evening, ten more graves had been dug.

This chain of events has become the nature of life in Kashmir, which awoke to a resurgence of its decades-old uprising after the killing of 22-year-old militant commander Burhan Wani in the summer of 2016. The present moment, however, has marked a shift from the earlier times of armed rebellion and popular protest that were laden with brutality and uncertainty. The Valley is now laden with brutality and certainty, instead. Certainty of violence and brute force, certainty of retaliation, and certainty of death.

Last year, an image emerged from Kashmir that felt, at the time, unsurpassable in the appetite for violence it depicted. Army soldiers had beaten a civilian, Farooq Ahmed Dar – an artisan who weaves shawls, and whom they had falsely accused of being a stone-pelter – until he reached a state of numbness fit for the making of a human shield, and then paraded him across villages. The photograph showed Dar tied to the front of a military jeep, his name printed on paper across his chest, his oppressors faceless but identifiable in their uniform, and his hostage body at the heart of their sadistic procession that lasted five hours and 15 minutes. “This shall be the fate of those who pelt stones,” warned one of the armed men in uniform.

Two weeks ago, each of those symbols – man, military, machinery – reappeared in a collision of violence that arguably surpasses the sadistic precedent set by the abuse of Dar. In a video that captures street clashes between the paramilitary forces and protestors, a Jammu and Kashmir police vehicle is seen driving right into and then on top of a civilian who was pelting stones at a CRPF van ahead. Eighteen-year-old Adil Ahmed, who falls to the side of the road as soon as the truck moving on top of him rides ahead, was brought dead to the hospital.

The moments in which the young man is jerked to the ground and then maimed to death last merely ten seconds. You see him standing, and then you don’t. The real horror of witnessing this, however, is not elicited by the rapidity of his death but by the steadiness with which he is killed. The vehicle hits him with uninhibited purpose, runs him down slow and cold, never halts nor trembles, and finally moves beyond him casually. It is a chilling exhibit of intention and homicide.

And yet it is only one of many exhibits from a larger file of images and videos that testify to the Indian state’s violence against Kashmiris. Last spring alone, videos circulated of military personnel shooting a civilian at point-blank range, of military personnel beating a civilian pressed to the ground, of civilians bleeding and abused inside an armoured vehicle, and of Dar being driven around as a human shield.

Adil’s murder feeds the same appetite for brute force that the incidents preceding it have, and those following it will, but it is also distinct for its stark representation of the disproportionate violence and power that characterises the conflict in Kashmir. It may even be the loudest and clearest of rejections, in recent times, of the official narrative that aims to illegitimise ‘stone-pelters’ by rendering them as radical and harmful, and simultaneously legitimise the state’s own gross use of force against them as an act of defence. In Adil, we witness the stone-pelter killed, not by another defenceless man, not even by an armed man, but instead by the might of a machine as it mows him down, from behind. The disparity in the capacity to hurt and the ability to defend could not be wider.

That Adil was in fact a stone-pelter who spent his last living moment hurling a piece of what became his own death across the street, or that Dar was eventually confirmed to be not a stone pelter but a man whose hands work with fabric, is irrelevant to condemning the violence they were subjected to. But the violence they were subjected to is most relevant to understanding why thousands of boys and men throw stones in Kashmir every week. It is also most relevant to explaining why the distance between the choice of picking up a stone or a gun is shrinking rapidly. 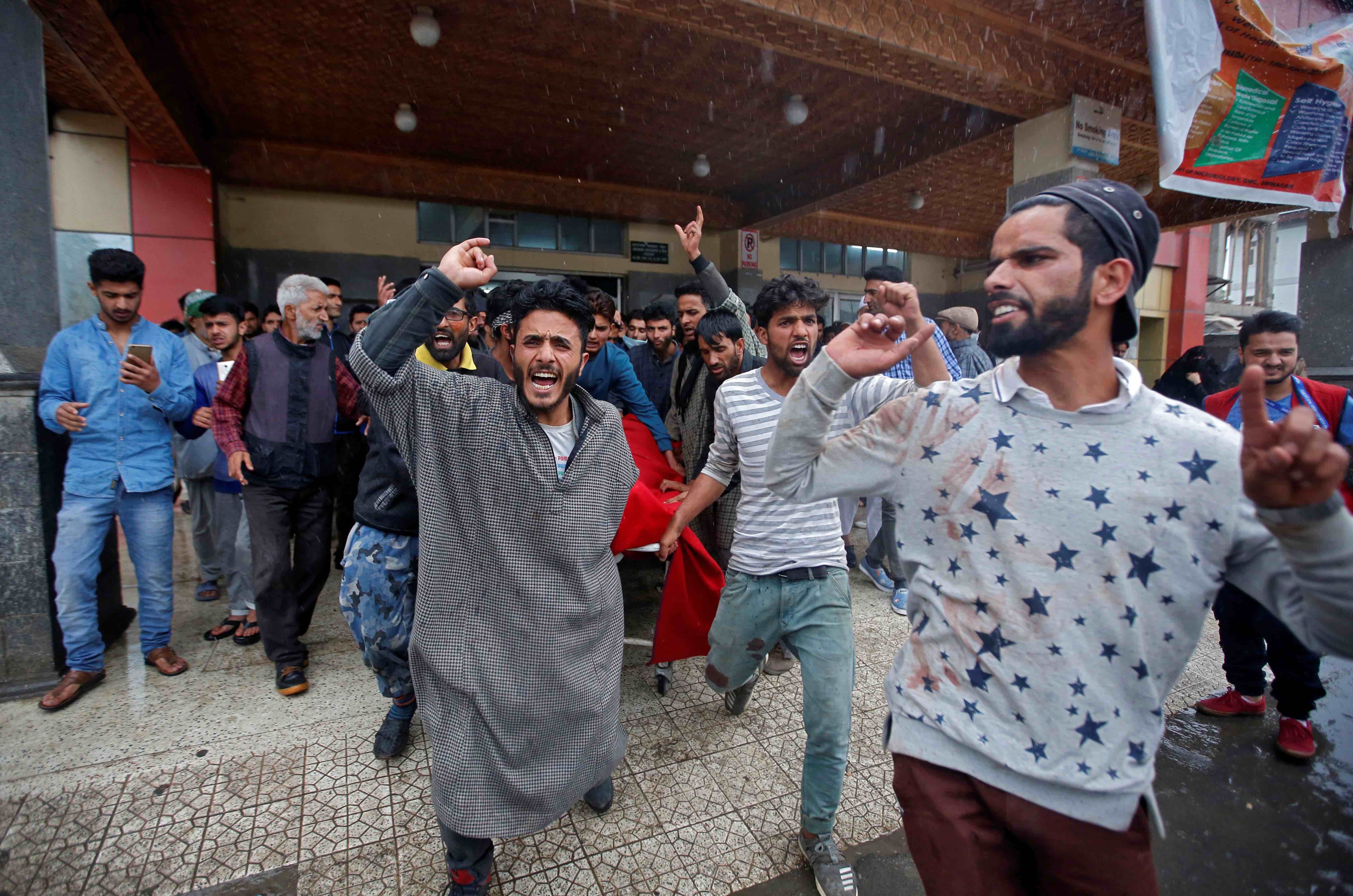 People shout slogans as they remove the body of a civilian on a stretcher, who according to local media reports was killed during clashes with security forces near the site of a gunbattle with militants in south Kashmir, at a hospital in Srinagar May 6, 2018. Credit: Reuters/Danish Ismail

Among the five militants killed in the final encounter that week was 32-year-old Mohammad Rafi Bhat, an assistant professor at the Department of Sociology in Kashmir University. On Friday morning, after giving his final lectures on Indian society and post-structuralism, Bhat left for the south of Kashmir, from where he called his father early on Sunday morning to tell him that he was he was trapped in an encounter, and that he would die very soon. “When did you become a militant?” were his father’s last words to him.

Perhaps he became a militant in the moment he left the premises of his university – no longer a member of that institution. Or within moments of arriving in south Kashmir. Or was it when he wore his own weapon around himself? Maybe it wasn’t until he was surrounded by soldiers, trapped, approached by death. Perhaps it wasn’t even until the moment in which he died. It is possible that he became one long before, when he was still teaching, unaware that he would someday die as a militant.

News media that took an interest in this particular death highlighted Bhat’s tenure as a militant as the shortest one of all time in Kashmir – all of 40 hours long. But what elicited greater attention is that he lived the 32 long years of his short life as a scholar, a teacher, a son and a husband, before dying as a fresh militant. His life and identity rejects the generalisation, and subsequent dismissal, of militants as bereft of literacy and knowledge, of personal lives and families, of roles and relationships in civil society. If anything, Bhat’s death confirms that the one thread that runs through this cycle – common to the pacifist, the stone-pelter, the militant and the bereaved – is something far more potent than any form of external influence: an evaporation of fear.

It reminds me of a conversation from last spring, when a friend called at the end of a week that had borne 11 funerals, to say that word on the street is that Kashmir will soon be taken by a storm. The defenceless are now fearless. “If they could, they would die a second time,” he said, of the living and the dead.

On that same day, when night fell and yet another procession moved through the Valley as thousands carried a fresh young corpse to its midnight funeral, I sought refuge in reading a novel set far from Kashmir, clean of all conflict. And then I turned to the page on which its epigraph was centred.

It read: “Every third thought shall be my grave.”

Niya Shahdad is a writer from Kashmir. She graduated from Tufts University with a BA in English and Art History in 2016.