It is clear that those who sat with New Delhi to devise a strategy to change public perception on the scrapping of special status were betrayed too. 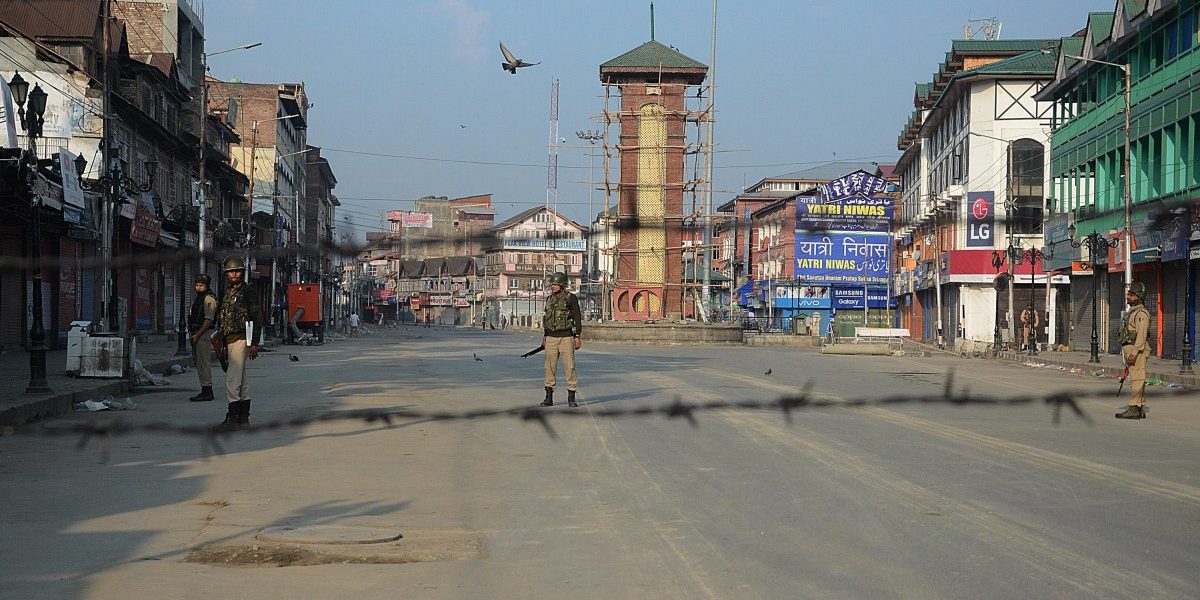 A pigeon flies over the clock-tower, in the city center Lalchowk, on the day the special status of Jammu and Kashmir was revoked. Photo: Wasim Nabi

Stories of betrayal have always been around us, from Shakespeare’s Julius Caesar to Judas.

Despite being one of his closest friends, Brutus was among several Roman senators who stabbed Caesar to death. This was surely not an easy decision for Brutus, as he loved Caesar. But for him, the Roman republic was more important. The rest of the senate used this loyalty to convince him that Caesar had to die for the republic to be saved.

Judas was one of the 12 Apostles of Jesus Christ. He is known for offering to betray Jesus to the authorities in exchange for 30 pieces of silver. Judas is said to have taken the soldiers to Gethsemane, where Jesus was praying. He then kissed him to identify him to the authorities. Legend also has it that Jesus knew Judas would betray him, but didn’t try to stop him.

Kashmir’s history may be complex but it is the same story.

These very lines of action are repeated again and again in new methods, only for them to fail and prove counterproductive. The same political processes are applied only to achieve similar results, the same promises are made to be broken and the same expectations are raised to be dashed. It is the same story of deceit and treachery.

Delhi has always played Delhi’s role, irrespective of which political party is in the office.

Historians are almost unanimous that Sheikh Muhammad Abdullah played a crucial role in India’s accession of Jammu and Kashmir despite the Hindu ruler’s stated inclination to join Pakistan. However, when the Constituent Assembly of J&K, under the leadership of Bakshi Ghulam Mohammad, ratified the accession with India, the then tallest leader of the state was jailed after being dismissed by the Sadr-e-Riyasat. 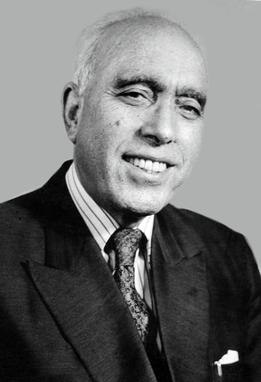 In 1956, when the state Constituent Assembly adopted a constitution for the state, declaring it as an integral part of the Indian Union, Sheikh was behind bars. His aides, led by Mirza Afzal Beg, were spearheading the plebiscite movement. Prior to this the largest but predominantly Hindu right-wing opposition party, All Jammu and Kashmir Praja Parishad, boycotted the election to the Constituent Assembly held in 1951 after nomination papers of 13 of its 28 candidates were rejected on technical grounds thereby giving the absolute majority to National Conference in the legislature.

After his release for a brief period, Sheikh was rearrested again in 1958 under the ‘Kashmir conspiracy’ case along with Mirza Afzal Beg and 22 others only to be released in 1964 when the Union government decided to drop the charges and withdraw the case.

In the same year Bakshi Ghulam Mohammad, who led the coup against Sheikh and was then leading the opposition to the government of then Chief Minister Ghulam Mohammed Sadiq, was arrested under the Defence of India Rules as he was contemplating to move a vote of no-confidence against the government.

This followed several political experiments including Sheikh-Indira and Rajiv-Farooq accords and the application of central laws through backdoor means.

The events around the 1984 assembly elections are, however, considered to be the mother of all evils, completely changing the law and order situation.

During the mid-nineties, meanwhile, local pro-government militias were created, reportedly with military and other security agencies’ backing and with the purpose of crushing militancy in Jammu and Kashmir.

This experiment added further chaos and commotion, and eventually the militia commanders were discarded. Some were killed mysteriously while others were sent to jails.

The assurances were, however, never honoured and no promise was kept. When after his demise, his daughter Mehbooba Mufti showed reluctance to form the government by seeking the implementation of the Agenda of Alliance, New Delhi resorted to the same old method. It created a parallel group which would be ready to take over PDP and form a coalition government with BJP.

Mehbooba had to surrender but only after assurances that all her priorities will be taken into consideration. The arrangements came to an end with the sudden pullout of BJP from the government, forcing Mehbooba to resign as the chief minister.

The withdrawal of support and the subsequent dissolution of assembly by the then Governor Satya Pal Malik to foil an attempt of PDP, NC and Congress to form a coalition government was a clear indication that the new dispensation in New Delhi was up to something sinister. Democracy was once again bulldozed and the writ of Delhi was implemented with full might.

While additional troops were being pushed into the erstwhile state and administrative orders were being issued to prepare grounds for a war like situation, the offices of the Prime Minister and Home Minister of India were giving final shape to what later turned out to be the biggest misuse of the constitutional and democratic institution. The government assumed every power to itself to make and accept recommendations.

Then came August 5, 2019, when the entire sub continent was taken by surprise. What was done and how it was done is now history.

On March 31, this year, when the entire country was battling with COVID-19, the Union government published a notification in its official gazette SO 1229(E), issuing the Jammu and Kashmir Reorganisation (Adaptation of State Laws) Order, 2020. While exercising its powers conferred by Section 96 of the Jammu and Kashmir Reorganisation Act, 2019 (34 of 2019), around 109 laws of the erstwhile state were either amended or repealed in conformity with the new administrative arrangements. Though most of the laws amended by virtue of the new notification only rectified technical lacuna in view of the downgrading of the state to Union Territory thus conferring absolute powers to the Lieutenant Governor, one particular amendment led to the storm in public and political circles of the region.

The Jammu and Kashmir Civil Services (Decentralisation and Recruitment) Act (Act No.XVI of 2010) was amended to redefine of domicile for government jobs. According to the notification, a domicile certificate has been made a prerequisite for anyone aspiring for government appointment carrying a pay scale for not more than Level 4. Following backlash, the law was amended within 72 hours, reserving all government jobs for domicile residents irrespective of level and pay scale. However, the scope of domicile was kept unchanged: the doors were finally opened for the outsiders to settle.

The Union government adopted the same methodology it used on August 5 when the special status of Jammu and Kashmir was taken away and the state was degraded to a UT. Just hours before the home minister Amit Shah tabled the Reorganisation Bill in the parliament, all political workers including top leadership were detained and some of them, including PDP chief and former Chief Minister Mehbooba Mufti remain under detention. This time the Union government preferred to issue the new orders when the whole region, like other parts of the country, was under lockdown.

The constitutional amendments scrapping the state of all its concessions, powers and status further strengthened the communal fault line in the Himalayan region. While a section apprehends a demographic invasion in the only Muslim majority state, others are looking at it as the end of Kashmiri hegemony.

A difference of opinion on ideological, religious and geographical lines did exist after August 5 but almost the entire population wanted its distinct identity, culture, language, lands and jobs of the state to be secured for themselves. They were expecting a new law on the pattern of the North East and neighbouring Himachal Pradesh in order to safeguard their interests, especially those of the youth. 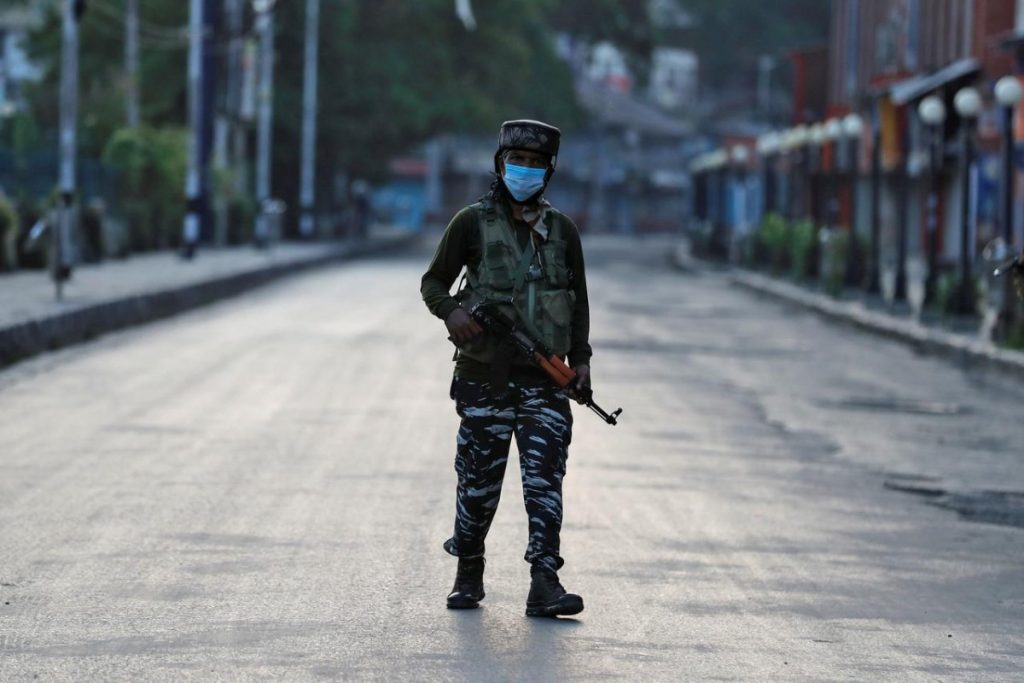 A Central Reserve Police Force (CRPF) officer patrols an empty street during a lockdown on the first anniversary of the revocation of Kashmir’s autonomy, in Srinagar August 5, 2020. Photo: REUTERS/Danish Ismail

Despite some face saving after the hurriedly incorporated amendment, dissent was visible and disagreements were made public even by those who wanted people to reconcile with a new political setup. The tricky domicile law has made it evident that the threat of demographic intrusion is reality.

It is clear that those who sat with New Delhi to devise a strategy to change public perception on the scrapping of special status were betrayed too.

A majority of the population in Jammu and Kashmir felt betrayed the day New Delhi broke its only kept promise, guaranteed by Parliament of India in the form of special status. The “sacred commitment” manifested itself in the form of Article 370 was breached just to uphold the political agenda of an organisation. But a section was still hopeful – some driven by religious belief and others by political ambitions. A segment of it was willing to believe that the government of India will not push non-residents to this region thus threatening its distinct cultural, geographical and linguistic identity – the same uniqueness its autocratic ruler wanted to preserve before he agreed to accede with India.

However, as one year has passed, the entire population of 12 million feel cheated.

National integration may have been the stated objective but the real focus was our resources, land, jobs and demography. Those who told the nation that constitutional position of Jammu and Kashmir was the only roadblock to end the sentiment of separatism and alienation are today enforcing lockdowns and curfew to ensure people have no means of expressing themselves.

They are telling the world that Jammu and Kashmir has reconciled with the new reality but back home, organised silence is being enforced with an iron first. The separatist and mainstream are dealt with similarly.

Those who gave life to sell the idea of India in Kashmir are today being dubbed anti-nationals. Those who held the national flag high are being jailed and prosecuted. The idea of democracy has died. The line between nationalism and idealism has vanished and Kashmir is at the cross roads.

Last year on this day, Delhi played the same role it has in the past. Brutus killed Caesar again, but this time, surely not for the sake of Rome.