Kashmir: 'Militant' Injured in Shootout Was a Civilian, Say Family and Neighbours

On Wednesday, police said they had engaged three militants in retaliatory firing. The family of the 'third militant' say he was at his shop when hit by a bullet.

Srinagar: Ayesha Begum kept repeating “my son is innocent” before she fainted inside a room, packed with women, at her residence in a locality on the Srinagar-Baramulla highway.

Her son Umar Fayaz Bhat was critically injured on Wednesday morning during a brief shootout between security forces and militants on the highway. The gunfight ended with the killing of two militants and a CRPF person.

At a press conference later, the J&K police identified Umar as the “third militant involved in the attack”. This charge is refuted by his family, relatives and neighbours. They say the young man was at his shop outside his house – barely half-a-kilometre from the site of the gunfight – when a bullet ripped through his chest and exited his back.

The family lives in the Lawaypora locality on the highway, in the outskirts of Srinagar. Fareeda, a neighbour of the Bhat family, said 25-year-old Umar was sitting on a chair outside his shop when the bullet hit him.

“I saw him getting off the chair, ducking and trying to run towards his home. He kept shouting ‘I have been hit by a bullet’,” said Fareeda. “He had barely run 10-15 steps before he fell down and started bleeding.”

The ‘shop’ Fareeda refers to is a small open stall on the edge of the highway, erected on four wooden poles. Until recently, it was Umar’s father, Fayaz Ahmad who manned the stall, selling food and household items. 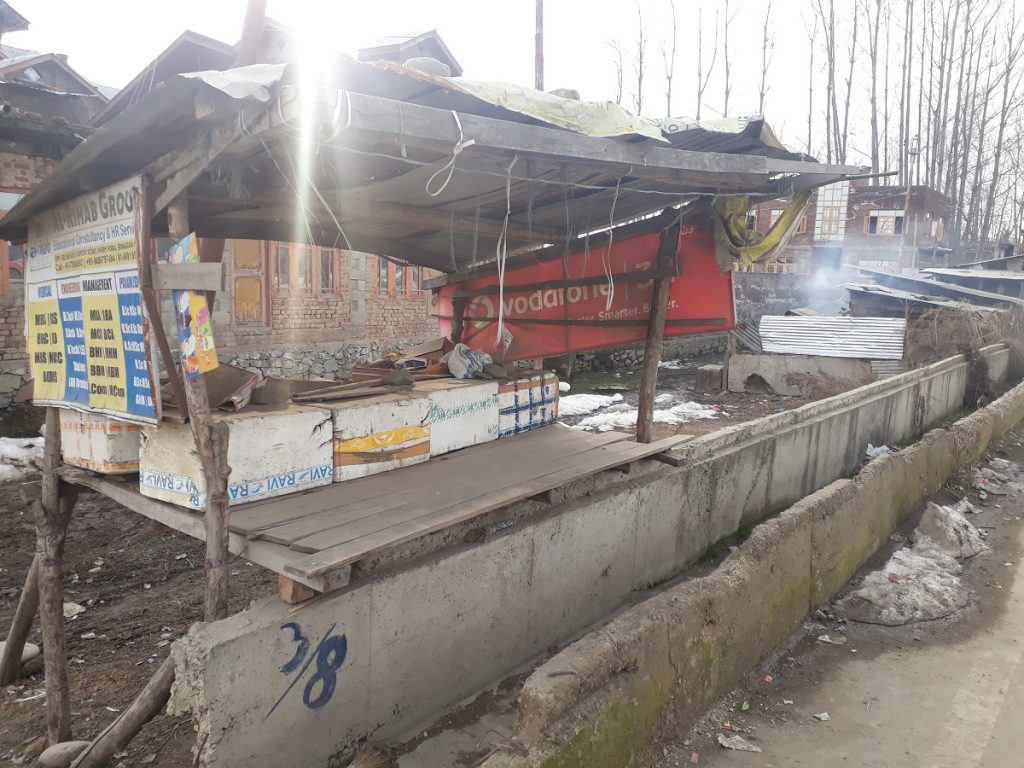 The family shop where Umar Fayaz Bhat, according to his family was hit by the bullet on Wednesday. Photo: Mudasir Ahmad/The Wire

On January 25, Ahmad suffered a cardiac arrest after thieves struck at their house in the night, according to a relative of Umar. He remained hospitalised for five days before the family shifted him to his brother’s residence in the nearby Chattabal locality to give him a much-needed break from work.

Umar’s mother Ayesha has been bedridden for the past 11 years after she suffered a brain haemorrhage. Her daughter, Humaria, says, “She developed a neurological problem after the attack and can’t stand up or walk on her own.”

Umar had been working as a salesman at a poultry shop in Srinagar’s Batamallo area before August 5, 2019, when the Centre scrapped J&K’s special status and enforced a lockdown in the Valley. Like thousands of young men in Kashmir, he lost his job after the shutdown.

As more women from the neighbourhood arrived to console the family, Ayesha regained her consciousness. She said for the past two months, her son was engaged in daily labour work to support the family financially.

After Ahmad suffered a heart attack, the family wanted Umar to take his father’s job over. After days of persuasion, Umar finally agreed to do so on Wednesday morning.

“He was at home. It took him more than an hour to take items out from the house and put them up at the shop,” said Ayesha, her eyes welled up. “I was relieved, but I never thought he would be fired upon and then falsely labelled as a militant,” she said. “I swear upon my life that he is innocent. He was at the shop when the bullet hit him.”

Umar’s aunt, Hameeda Begum said less than 20 minutes before the incident, she had called him home to help her son, Asif, fix the battery connection in a car. “I insisted he stay for a cup of tea, but he didn’t as he wanted to return to the shop,” said Hameeda, who lives adjacent to the Bhats.

A youth from the locality said he met Umar at the shop at around 10:30 am. “He discussed his family’s problems with me and said his aunt helped him financially to purchase goods for the shop,” said the youth, wishing not to be named.

Umar was admitted to Srinagar’s Shri Maharaja Pratap Singh Hospital (SMHS) on Wednesday afternoon and has been operated upon since then. He continues to be on a life-support system in the ICU. “The bullet perforated one of his lungs. He is under observation though he has regained consciousness,” said a doctor.

The family has so far not revealed Ahmad – who is still recovering from the heart attack – the actual nature of the injuries his son sustained. Ahmad has been told that the bullet injury is not serious and Umar will be discharged by Sunday. “He wants to visit his son at the hospital but I fear his condition may worsen if he sees the nature of Umar’s injuries,” said Hameeda.

To take Umar to the hospital, Hameeda said she stopped a vehicle on the highway. The vehicle was on its way to Srinagar and she, along with Asif and a neighbour, rushed her brother to the nearby JVC hospital. From there, he was shifted to SMHS.

Asif claimed that the vehicle was stopped by the police at a check post on the highway for some time. “We were only allowed to proceed when I showed them my Aadhaar card as proof that we were civilians,” he said. 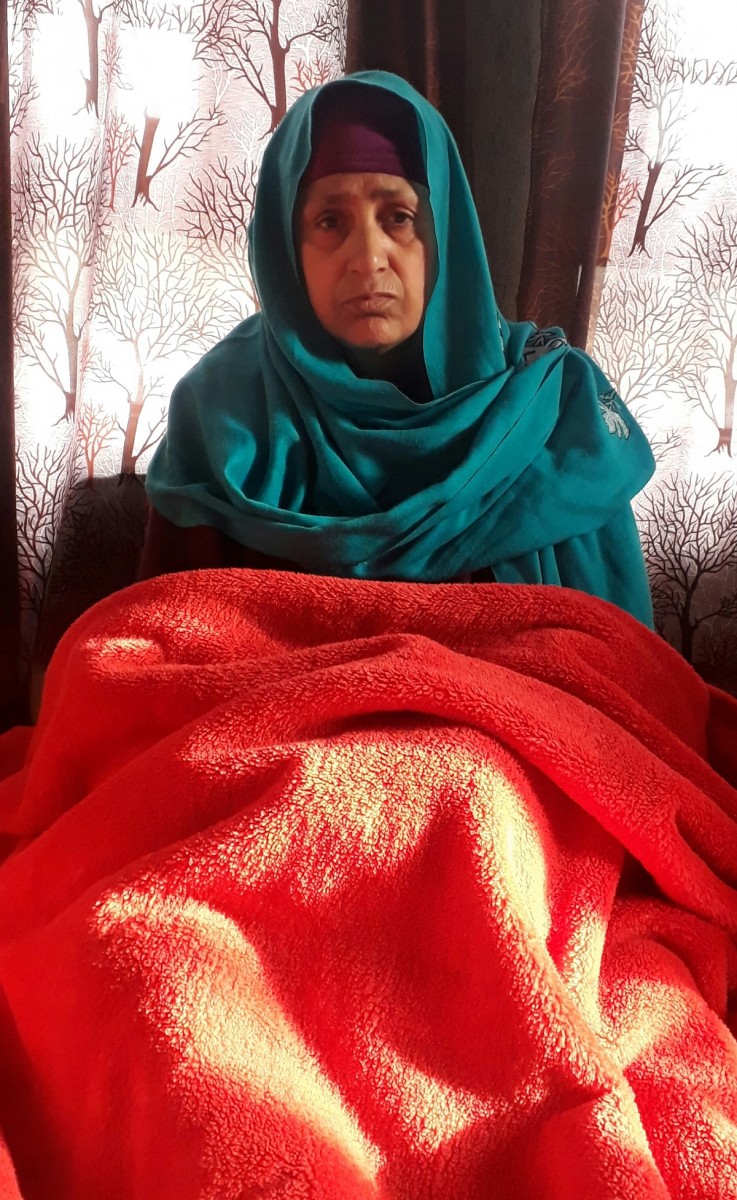 Addressing a press conference in Srinagar after the shootout, J&K director general of police Dilbagh Singh said three militants were travelling on a two-wheeler and when they were asked to stop at the check post, one of them fired at a CRPF man with a pistol, killing him on the spot.

“In retaliatory firing, two militants were killed while the third one was injured. He was captured alive and has been hospitalised,” said the DGP. He identified the third “militant” as Umar Fayaz.

In a statement issued on Wednesday, the police did not name Umar but said the “third militant” was injured in the gunfight. The two militants who were killed were identified as Zia Ur Rehman of the Lashkar-e-Toiba and Khateeb Das of Hizbul Mujahideen.

CRPF special DG (J&K) Zulfikar Hassan, who was also at the press conference, said the two militants were killed in retaliatory firing while the “third militant” was also shot. “He is alive and has been shifted to the hospital,” Hassan said.

Inspector general of police (IGP) Vijay Kumar also told the media that the “third militant captured alive was Umar Fayaz.” According to the IGP, Umar was affiliated with to the Jammu and Kashmir Islamic State (JKIS), which has pledged allegiance to the terror group Islamic State.