"My ration card is registered in Bihar. It is of no use in Srinagar. What do I do?," a migrant worker said when asked about government efforts to provide relief supplies.

Srinagar: Lockdowns are not a new phenomenon in the Kashmir Valley. Over the course of 12 years, Karimullah* and his sixteen co-workers have been visiting Kashmir in the erstwhile state of Jammu and Kashmir. Originally from Bijnor in Uttar Pradesh, he and his co-workers have been employed across Kashmir and have seen many a lockdown and curfew. But the COVID-19 induced lockdown has presented a fresh set of problems.

Migrant labourers like him, in fact, are an integral part of the local economy of Jammu and Kashmir. They are mostly masons, carpenters, labourers, barbers, and embroiders and work even in gold ornament shops. The local economy rests on the shoulders of an estimated one million-strong migrant worker population that comes from the northern and eastern states of India, and Nepal.

The migrant labourers are estimated to make up 80% of the Valley’s construction workforce. The number of seasonal migrants in Kashmir varies from two lakh to five lakh and, as per the 2011 Census data, around 28 lakh migrants from other parts of India also come to Kashmir. Being a conflict zone, Kashmir has its own share of security and safety concerns in comparison to any other part of India. Despite this, thousands of migrant workers travel to various parts of Kashmir in search of livelihood.

These migrants generally come to the state in February and stay till October. This year migration to the state started just before the World Health Organisation declared COVID-19 to be a pandemic and the government of India decided to implement a nationwide lockdown in the country from March 25, 2020. This set in motion a phenomenon of reverse migration across India, from cities to native villages, soon after the announcement. However, many labourers who had already migrated to Kashmir in February 2020 in search of work are still stuck in the Valley bereft of work.

Pre-corona: working in a conflict area

Among the 16 workers, some have managed to procure work in Kashmir through contractors while few others have managed to start their own ventures as daily vendors, barbers or tea sellers. Karimullah had first come to Kashmir in 2008. Since then Kashmir has been his home despite its volatile political situation. “I live here without fear”, said Karimullah. “Yahaan darr ka mahaul nahi hai (There is no atmosphere of fear here)”, he added hinting towards the growing intolerance and recent acts of violence against minorities in India.

“I earn about Rs 750/800 per day as wage for my skilled labour whereas my unskilled co-workers make about Rs 600 per day, all of which has ceased due to lockdown. I live in a rented accommodation of two rooms and a kitchen, which I share with my 16 co-workers. The rent of Rs 6,000 per month is shared between us”, said Karimullah. One of the primary reasons why these migrant labourers prefer that their wives and children stay back in their native villages is owing to the volatile political atmosphere in Kashmir.

Outbursts of violence and skirmishes between civilians and police are a common sight in Kashmir. Curfews and bandhs have become an integral part of the everyday lives of people in the Valley. This does not hamper work though, according to them. Migrant workers go to work even during curfews and hartals by walking to their places of work. If the workplace is far off, then the contractor provides them with accommodation. “We have gone through hardships before and have worked even in curfews and hartals. But this lockdown is a different challenge”, said Karimullah. 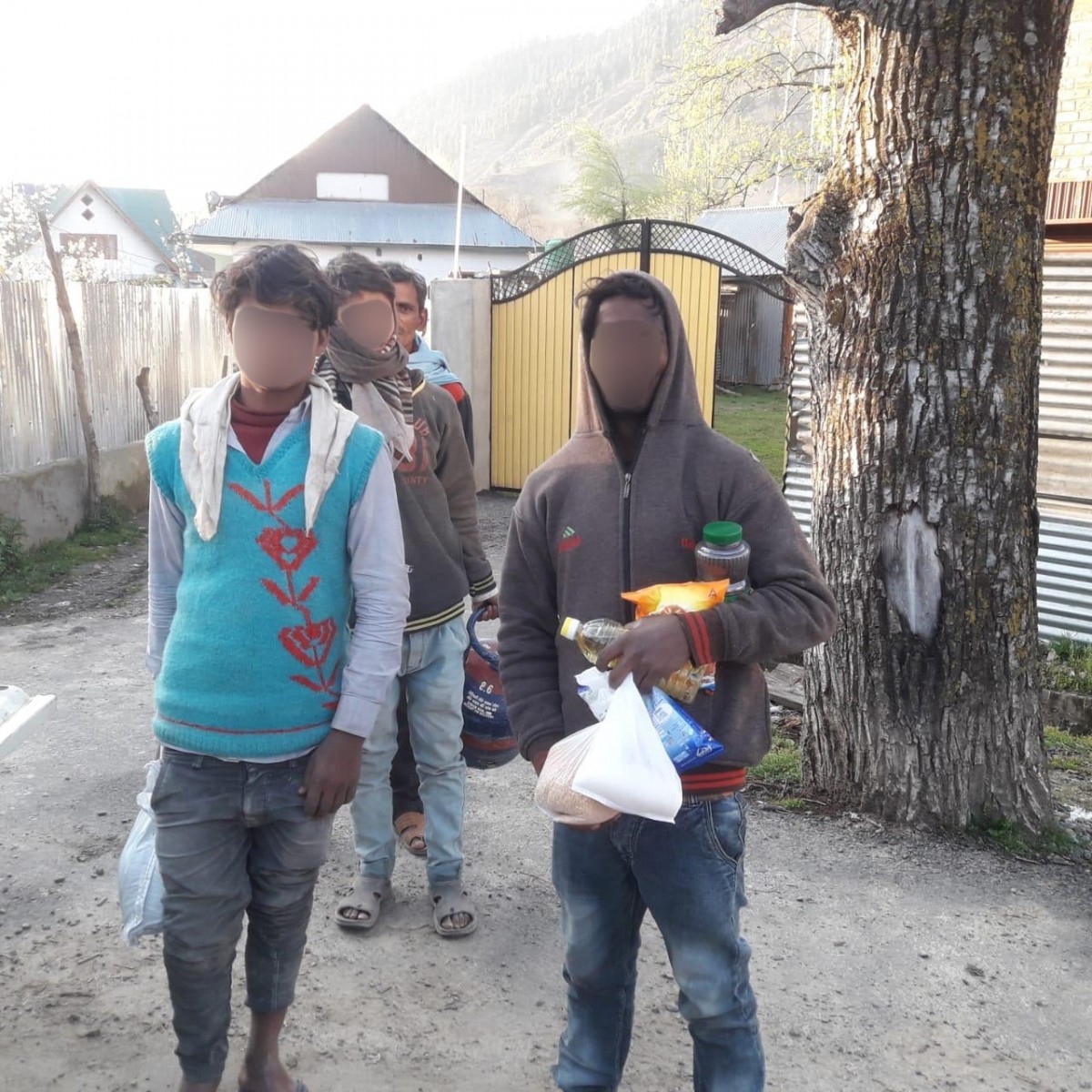 Last year in August, the government of India scrapped Article 370 and revoked the special status of the erstwhile state of Jammu and Kashmir. Karimullah and others, fearing a worsening of the political situation, decided to leave for their homes then, only to come back a few days later upon the request of their contractor and consequently, resumed their “business as usual” work.

However, this was not the case for several others like Sunil* and his village mates who worked as carpenters here. Originally from Punjab, they left after the lockdown was imposed in August 2019 and came back only in February 2020 to resume their work and earn, after a gap of six months.

From one lockdown to the other

The abrupt lockdown announced by the government has become the biggest challenge for migrant workers who are practically stuck in various parts of the country. The lockdown has compelled a large number of migrants to stay back in metro cities like Mumbai and New Delhi. Some have, out of desperation, embarked on long and arduous journeys on foot to villages hundreds of miles away. Their ordeals brought back memories of the mass migration that occurred when the country was partitioned in 1947. These days, however, the divide is largely between those who are well-off and those who live on daily wages.

Sensing the exigency of the situation, the Jammu and Kashmir high court on April 16 directed the divisional commissioners of Jammu and Kashmir to submit a report on the conditions of migrant labourers. All the 17 workers The Wire spoke to, however, considered themselves fortunate that they were living in their rented accommodations instead of the government relief camps set up in various parts of Kashmir.

Videos showing appalling conditions at government relief camps had been circulated on Whatsapp and had made them reluctant to seek shelter there. None of the migrant workers had agonising stories of barefoot flight from cities like those of migrants across the rest of the country. Most of them came to the state through contractors and are taken care of by them during the lockdown. Some also have managed to get basic necessities for themselves from past savings and credits from shopkeepers and landlords. Some labourers were given verbal assurances for leniency in rent payments. 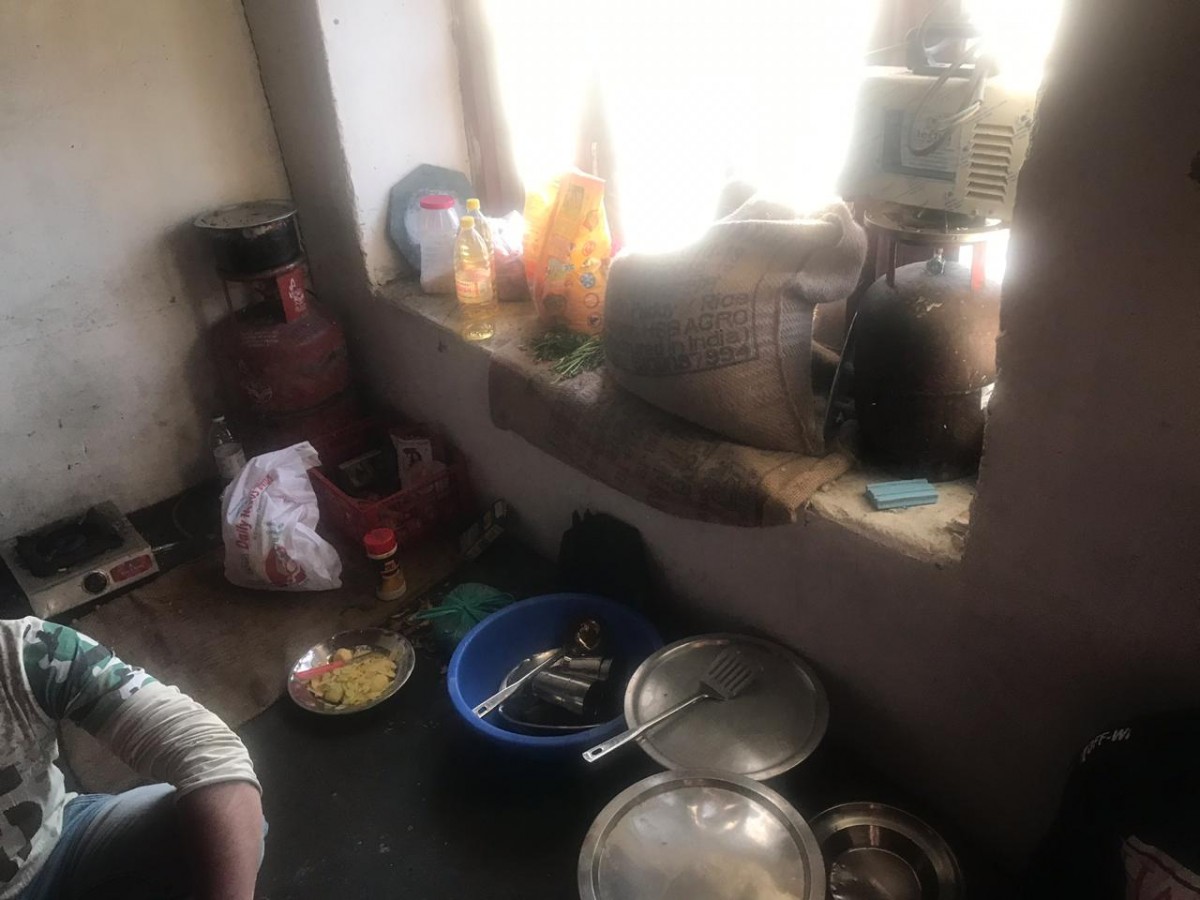 Rice bag given to labourers by their landlord in Srinagar. Photo: Author provided

The contract-labourer relationship according to them is one of ‘lein-dein’, (give and take) which in the general lockdown conditions –  which are rather common in Kashmir – works for them. The contractor takes the responsibility of workers during curfews and hartals in Kashmir. Hence even under the COVID-19 induced lockdown, the same arrangement was working for them.

However, all migrants are not the same and all have different stories to tell. A group of self-employed, daily wage labourers working as brick kiln workers in North Kashmir preferred to go back to their homes instead of being stuck with no work. Ram* and five of his co-workers belong to the Betiya village in Bihar. They work on piece rates and earn not more than Rs 600/700 per day. They left the Valley in August after the lockdown and did not return until February.

For this group of daily wage labourers, this was the start of seasonal work of six months. But now, with no work and no wages, despite the hardships of travelling, they still preferred to go back to their villages. The uncertainty of the future loomed large over their heads and with no work since August 2019, they couldn’t fall back on any savings to assist them during this lockdown. The local administration had reached out to them with relief packages, masks and gloves, and they were instructed to reach the nearest police station for the next batch of supplies. 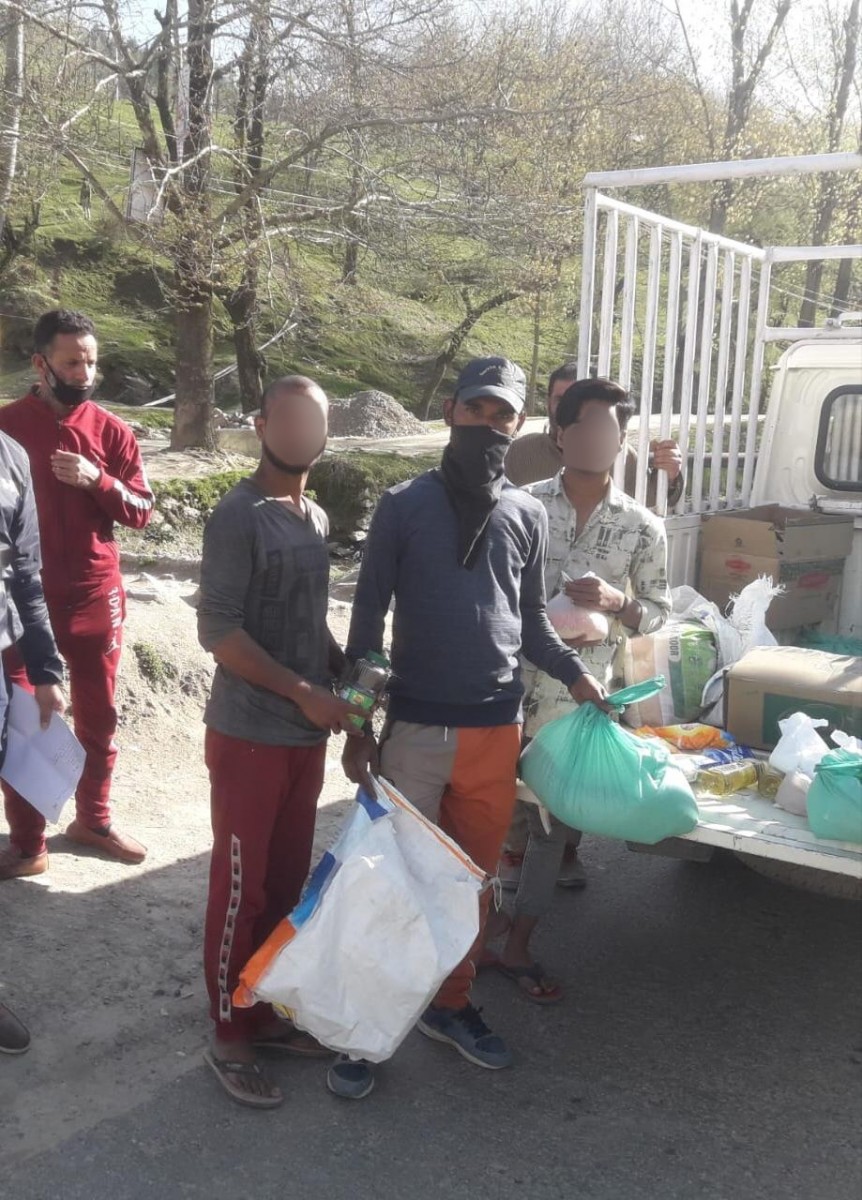 While the Ministry of Home Affairs (MHA) has issued an order “which stops landlords from demanding rent from students, workers and migrant labourers for a month,” the labourers were unaware of any such order or any other scheme flagged by the government for them during this lockdown. The NITI Aayog has sought contributions from Civil Society Organisations (CSOs) to address the problem of migrant labourers amidst the COVID-19 pandemic in Jammu Kashmir. The Centre directed the districts to undertake a comprehensive enumeration of migrant labourers and stranded persons and make all necessary arrangements for providing food and shelter to them.

In J&K, Lt Governor G.C. Murmu announced a relief package of “Rs 1,000 to each of the 3.50 lakh workers registered with Building and Other Construction Workers Welfare Board for purchase of rations during the 21-day lockdown. It also includes provision of two months ration under PDS, one months advance ration under mid-day meal, ration packets for slum dwellers and destitutes”.

Also read: ‘This is About Humanity’: Kashmir Family Opens up Home to Mumbai Tourists Stuck in Lockdown

However, none of the workers interviewed were aware of the new schemes or relief packages announced for them. Without portability of ration cards, these seasonal workers will also not be able to avail PDS facilities, thus leaving most of them out of its coverage. The lack of information about relief measures taken by the government, a general lack of up-to-date identification documents, lack of Aadhar card linked with the ration card, no employment card (like BOCW card), inactive bank accounts, etc., have impeded workers’ access to benefits of relief efforts provided by the government.

All of these workers, however, have ration cards, Aadhaar cards, PAN cards, etc. and access to basic government schemes in their native villages. “Mera ration card ka toh Bihar ka hai. Srinagar mein nahi chalta. Kya karoon? (My ration card is registered in Bihar. It is of no use in Srinagar. What do I do?),” said Ram. The seasonal migration without families makes it difficult for them to carry their ration cards to destinations.

The government started the inter-state portability of ration cards w.e.f April, 2018 under the Integrated Management of Public Distribution System (IM-PDS), but its implementation in all states is still pending and will supposedly be finalised by July 2020. The digitised portable PDS (E-PDS) for the beneficiaries of National Food Security Act is the scheme for migrants where subsidised food can be purchased in other than their native states, but this programme has also been tried only in selected clusters. Without portability, the likes of Karimullah, Sunil and 100 million other circular migrants remain excluded.

On April 19, 2020, in a nationwide radio address, Prime Minister Narendra Modi said, “I had to take certain decisions which have put you in lots of difficulty, especially when I look at my poor brothers and sisters. They must be thinking, what kind of a PM is this who placed us in this difficulty. I seek their forgiveness.”

Ram complained and said, “Modiji declared a lockdown of 1.3 billion people for 21 days, with a notice of fewer than four hours. We would have been happier had Modiji, kept us in mind before declaring the lockdown. What difference will his apologies make now.”

“While the government was planning the lockdown, I wonder if we were anywhere on his mind!” he added.

Note: Names have been changed to protect identities.

Misbah Rashid is a PhD scholar from JNU, New Delhi and is currently associated with the Centre For Equity Studies, New Delhi.