'We Thought It Was a Toy': Unexploded Shell Kills Another Child in Kashmir

Three other children – cousins aged between six and 12 – are in hospital, battling for their lives. Srinagar: Inside Srinagar’s Shri Maharaja Hari Singh (SMHS) hospital, grief has three different addresses for the Sheikhs from Shopian: Ward No 10, Ward No 17 and Ward No 18.

Each time door of any of these wards opens, the family sinks in despair. Three of the family’s children – cousins aged between six and 12 – lie inside, battling for their lives. They were critically injured when a live grenade went off in Memandar village on Wednesday morning.

No time to mourn death

Seven-year-old Saliq – another child from the same family – has died. The class 3 student was among the group of children who found the live grenade while they were playing with a monkey in an orchard, a day after two militants were killed in a gun battle between security forces and rebels in the area.

Saliq succumbed to his injuries within minutes of the blast. His mother, Rukhsana, saw the explosion tossing him and others in air, one of their relatives said. One of his arms was blown away while splinters ruptured his abdomen, causing irreparable injuries to internal organs.

The young boy was buried in a hurry. The families didn’t have enough time to mourn his death – within an hour they were all in the hospital, crying and praying for the lives of the three other children.

Two of the injured, 12-year-old Tahir and seven-year-old Razia, are siblings. A class 6 student, Tahir’s right hand and legs were severely damaged in the incident that has left an entire village, comprising around 300 households, in deep mourning.

After the preliminary treatment at SMHS, doctors referred Tahir to the Bone and Joint Hospital so that the severity of the injury to his bones could be established. The next morning, his injured hand was amputated.

His father, Khursheed Ahmad Sheikh, collapsed when doctors broke the news to him. Moments later, as he regained consciousness, he leaned against a wall and cried: “Oh God! He is a flower yet to blossom.”

Within hours, Tahir had to be shifted back to SMHS hospital because of life-threatening injuries to his liver caused by splinters.

At the hospital, as he lay unconscious on a bed in Ward No 18, his mother, Gulshan Begum saw his entire arm bandaged. “What have you people (the doctors) done to him?” she kept asking repeatedly.

The doctors gave her blank looks at first, and after a few minutes one of them responded: “He will be fine soon.” As Khursheed heard the doctor, he walked out of the ward, rushed down the stairs and wept. “How will I explain to her what has befallen us?” he told an elderly man who tried to console him.

Tahir’s condition has deteriorated in the last 24 hours, the doctor said. He had to be resuscitated thrice as his blood pressure kept falling “drastically” due to blood loss.

“The injuries to his liver are a major concern. He is in a bad shape,” said the doctors as Gulshan stood silently in a corner of the ward, tears rolling down her face.

Soon she remembered her daughter, and ran towards Ward No 10. “I want to have one look at my daughter’s face, please let me in,” Gulshan pleaded with a security guard at the entrance of the ward.

“Your daughter is sleeping and it isn’t advisable to disturb her. Wait for some time,” the guard responded. Razia, a class 3 student, is unconscious after she was operated upon to stop her internal bleeding.

“She has abdominal perforations and her condition is not stable yet,” said a young doctor.

“I just want to hear my children calling me ‘mamma’ again. I don’t want anything else. Please ask them (the doctors) to let me talk to my children,” Gulshan said to her relatives. 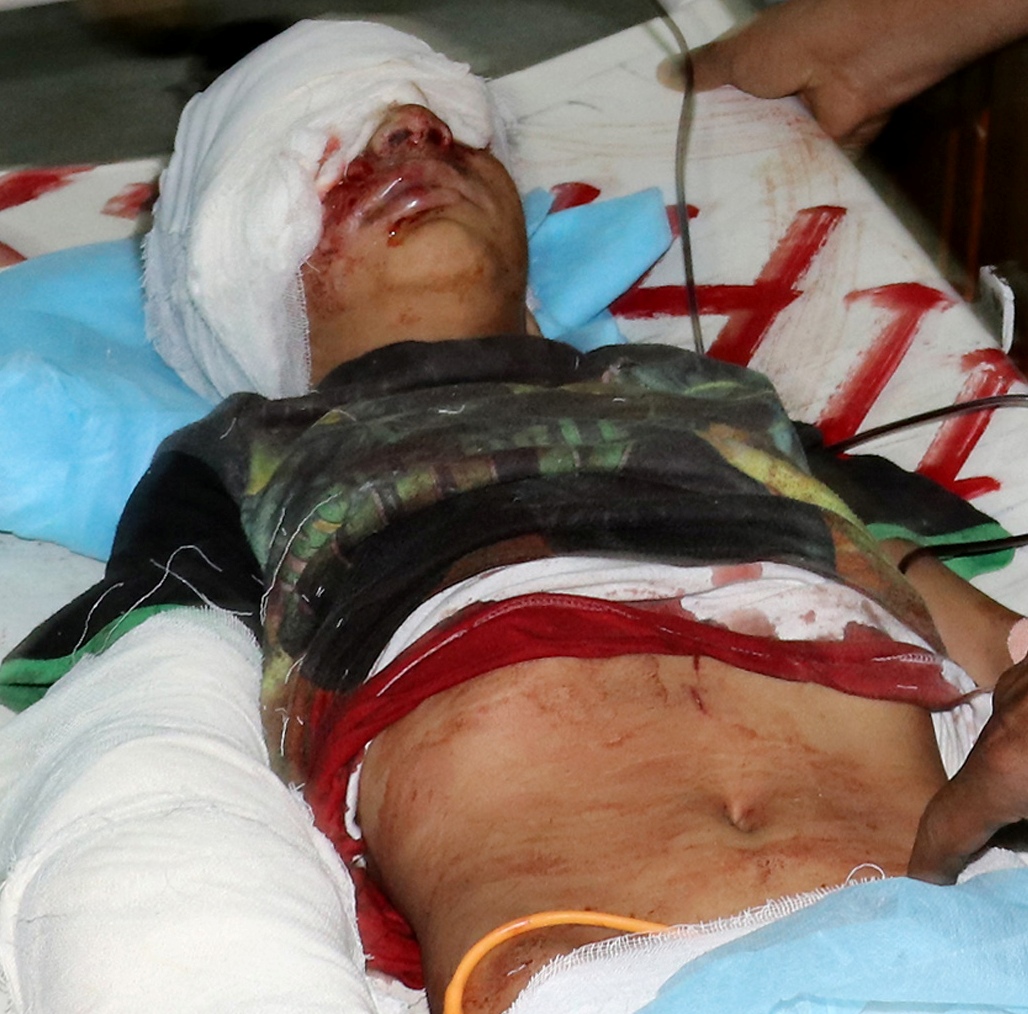 At the opposite end of the corridor, in Ward No. 17, Arslan, a toddler, is lying motionless in the ICU. He will not be able to see again, “if he makes it”, a doctor said. Arslan has injuries in his internal organs and both his eye globes have been ruptured.

Since yesterday, his mother, Zamrooda, has been pleading with every attendant who passes by to pray for his son. “You too are a mother; he is the light of my eyes. Please pray for him,” she asks a woman with folded hands, tears rolling down her face.

“Every day is a doomsday for us. How long have we to suffer?” an elderly man from the family asked.

Arslan’s father, Muhammad Aslam Sheikh, sits frozen at the entrance of the ward. “They (the doctors) are not telling me the truth. Somebody please ask them about the condition of my son,” Aslam murmured, holding his son’s clothes close to his chest. Aslam and Khursheed are brothers; Rukhsana is their youngest sister.

‘We thought it was a toy’

In the surgical ward, Suhaib, son of the Sheikhs’ neighbour Shabir Ahmad, looks horrified as he lies on a bed, his trousers stained with blood.

“It was something like a bottle lying near a drain. We thought it was a toy,” the six-year-old boy said in a soft voice. Then, running his hand across his face, he recalled that one of his friends ran away with the “toy” and others followed him. “I was at some distance…they had huddled around and suddenly I saw smoke. And then there was a loud bang,” he said, his eyes wide open.

The next moment, Suhaib saw all the children including his cousins lying on the ground, bleeding. “I got scared and ran away,” Suhaib said, trying to cover his face with his little hand again.

After a brief pause, he continued. “While I was running, I saw my foot drenched in blood. I cried but didn’t stop.” That is when he was picked up by a neighbour and rushed to a local hospital.

“You are lucky,” his maternal uncle said to Suhaib, looking at the minor injury he suffered on his knee.

Suhaib is worried about his friends. “Where are they? Are they home? They had blood on their face, everywhere,” he asked his mother, Yasmeena. She didn’t respond, but tears trickled down her face.

Over the years, Kashmir has repeatedly seen death and injuries due to unexploded shells near encounter sites.

In January, nine-year-old Musharaff Fayaz of Chandigund died when a shell he had picked up from an encounter site exploded in his hands. In August 2015, two brothers, Bilal Ahmed Reshi and Shakir Ahmad, aged 10 and 12, were killed after an unexploded shell they were fiddling with went off in Ganderbal district. A month later, 11-year-old Junaid Ahmad Dar was killed and his mother injured when the boy tossed around a live shell in Kupwara’s Ladoora village.

According to human rights groups, more than 100 people, mostly children, have been seriously injured in such explosions since 2000. Many of them died.

In 2011, the government asked security forces to draft a plan to avoid the loss of lives due to leftover explosives at encounter sites. A senior police official, however, argued that protests and stone-pelting at gunfight sites “forces them to wind up clearance operations in hurry”.

“But responsibility has to be fixed somewhere. We can’t let our children die or get maimed for entire life in these avoidable incidents,” a senior surgeon at the hospital said.