This is the third time foreign envoys have been taken to the Valley since August 5, as the Centre attempts to showcase 'normalcy'. 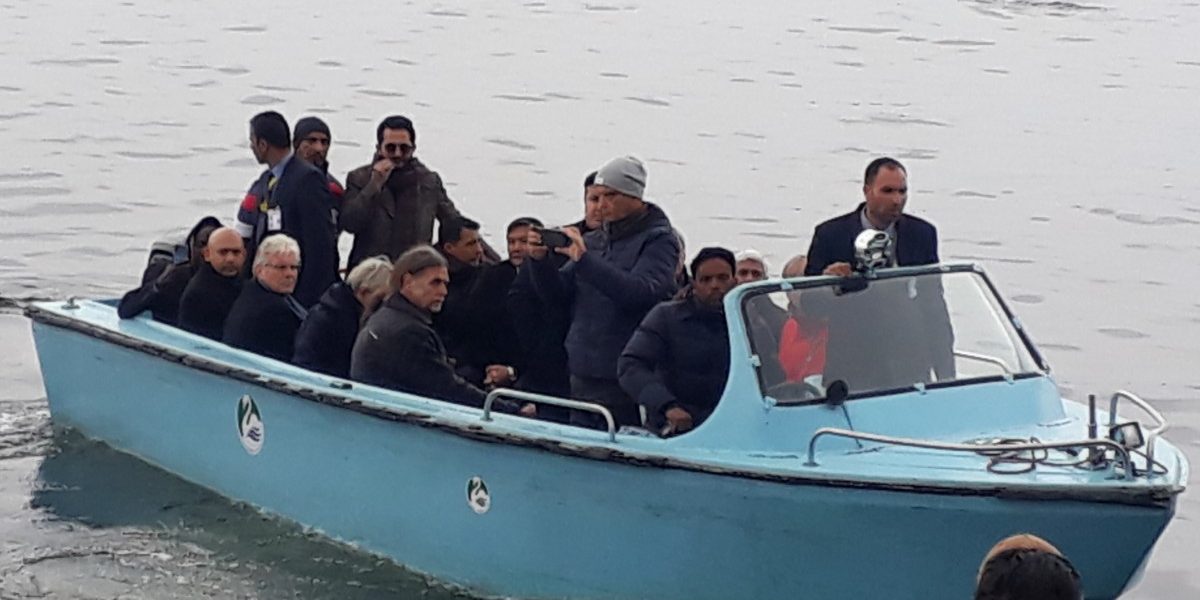 Envoys on a boat ride on the Dal lake. Photo: Mudasir Ahmad

Srinagar: Diplomats from 25 countries on Wednesday began their visit to Kashmir with a shikara (boat) ride on the Dal Lake in Srinagar.

This is the third such facilitated visit of foreign observers to Kashmir to “assess” the ground situation in the region after the Centre revoked Jammu and Kashmir’s special status on August 5 last year and divided the state into two union territories.

These high-profile trips are seen as a attempt by the Centre to demonstrate to the outside world measures undertaken to restore “normalcy” in the Valley.

“We are here just as tourists,” Frank Hans Dannenberg Castellanos from the Dominican Republic told the media after the foreign delegates finished their 50-minute shikara ride on the lake, amid high security and chilling weather conditions. He described the Kashmir Valley as “the most beautiful place”.

During their two-day stay in J&K, the diplomats will also travel to Jammu, where they will meet Lieutenant Governor G.C. Murmu and civil society groups. In Srinagar, they met delegations of businessmen, traders and fruit growers, journalists and some political groups.

In our interaction with the Kashmiri media outlets, the media people seriously urged the govt to restore the internet broadband as it is causing them so much problems to report and broadcast. pic.twitter.com/e4t8vey4go 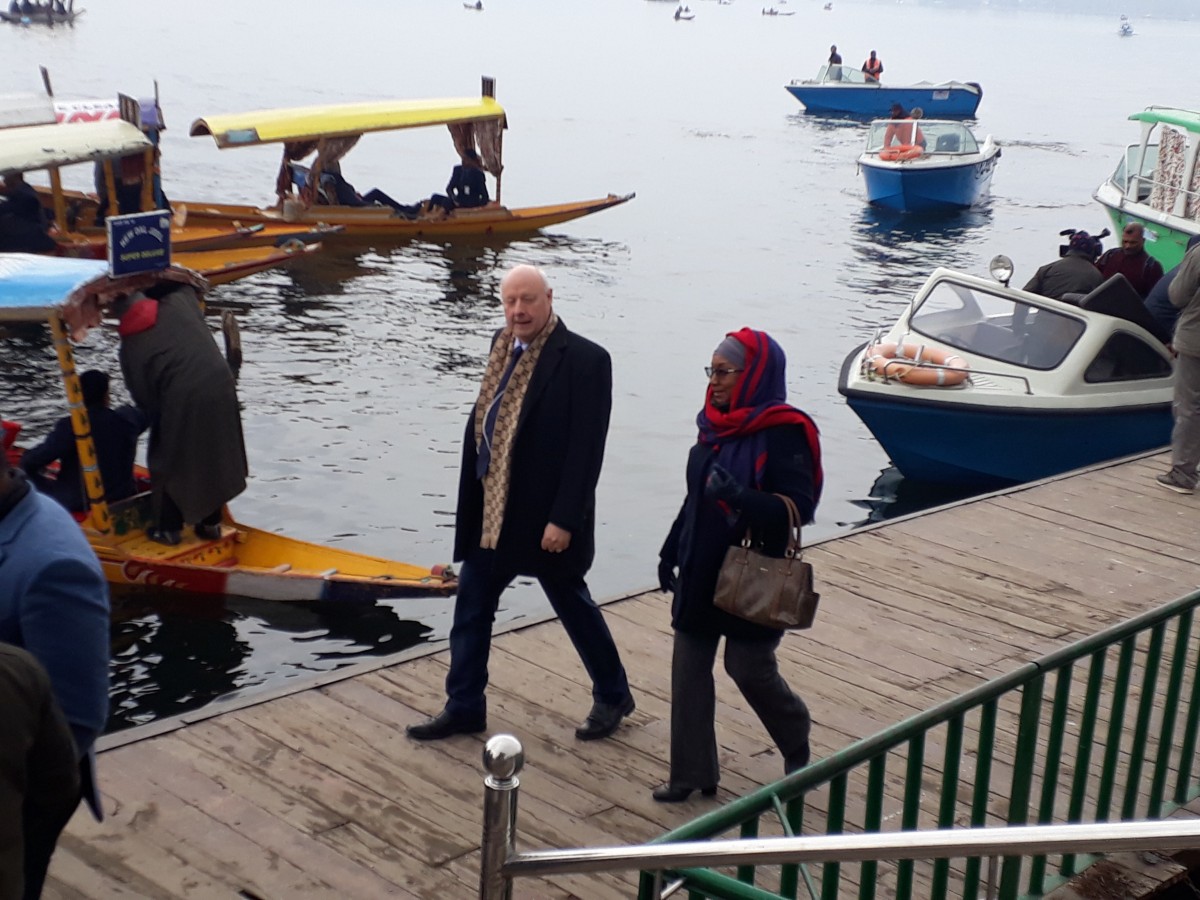 “Everything is fine here. It (Kashmir) is the part of the world I always wanted to visit. It is really great to be here,” said the envoy from Afghanistan, chargé d’affaires Tahir Qadiry. “The schools are open here, people are going to schools and shops (are) open.”

Though the envoy said the group saw many schools open along the road on way from the airport, educational institutions were shut in Kashmir on December 16 last year for a three-month winter vacation.

We (22 foreign envoys) are interacting with the traders, businesswomen & entrepreneurs in Srinagar about the status of business & tourism in J&K on the sideline of our tour to this beautiful valley. pic.twitter.com/bv3N7oVhzz

The delegates visit comes barely a week after the Centre detained two former J&K chief ministers, Omar Abdullah and Mehbooba Mufti, and four other politicians including two ex-ministers, under the controversial Public Safety Act (PSA). Under the law, a person can be jailed without trial for up to two years.

While the diplomats were also scheduled to visit Baramulla district in north Kashmir, a senior official said the programme was likely to be cancelled owing to “bad weather”.

He said the envoys will be apprised of the ground situation in J&K. “They will also get a firsthand account of the situation through their meeting with delegations,” said the official.

The diplomats will be meeting the delegations at a posh hotel on the banks of the Dal Lake which has been made out of bounds for people.

The latest visit by the foreign delegates comes at a time when the EU is scheduled to vote on at least six resolutions on Jammu and Kashmir and Citizenship (Amendment) Act next month. 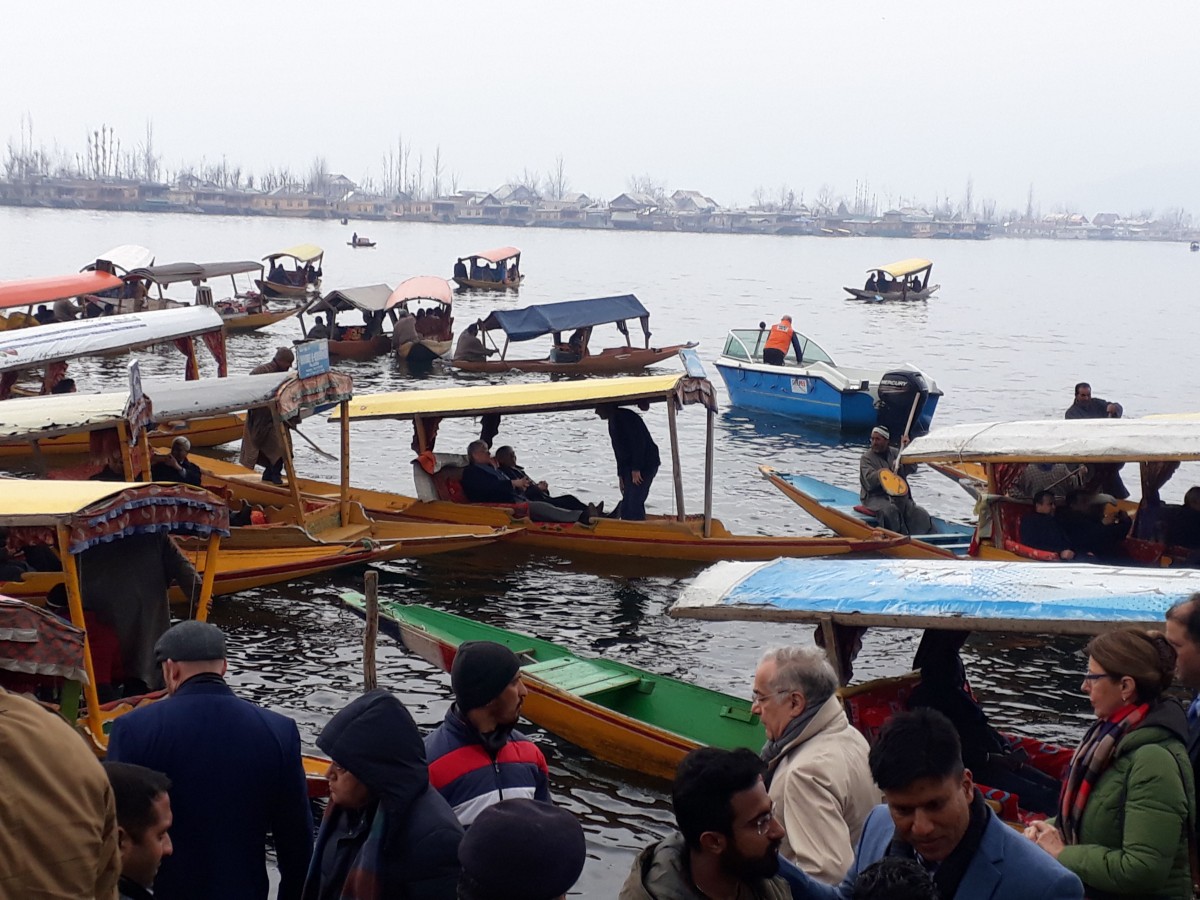 Though the resolutions were to be put to vote last month, the European parliament postponed the voting at the last minute. This was a relief for Indian government, which has faced global criticism for how it handled the situation in Kashmir after August 5.

“We have just started (the visit). I just wanted to see how things are here. That is why I am here. I am happy,” said another envoy.

Last month, diplomats from 15 countries visited Kashmir. The tour was described by political parties as “guided”, in an attempt by the Central government to project normalcy in Kashmir. Many EU countries had refused to be part of the “guided tour”.

Last October, another foreign delegation, comprising members of the European parliament, mostly right-wingers, visited the Valley. The high-profile visit ran into controversy after media reports said it had been “arranged” to showcase normalcy in Kashmir.

The Valley was put under a lockdown and all means of communications including the internet, mobile and landline services cut in the intervening night of August 4 and 5, barely hours before the parliament scrapped Article 370 and bifurcated the erstwhile state of J&K into two union territories.

According to a report by two human rights organisations – J&K Coalition of Civil Society and Association of Parents of Disappeared Persons – more than 400 persons were booked under the PSA after August 5 and over 5,000 people were arrested, in anticipation of protests against the Centre’s decision. Another former chief minister and sitting MP from Srinagar, Farooq Abdullah, was detained under the stringent law in September last year.

Even now, more than six months after the law was changed, the government is yet to restore the internet fully in the Valley. The authorities have resumed only 2G internet services on mobiles and people have access to only 305 white-listed websites.