Safiya and Suraya, daughter and sister of Farooq Abdullah during a protest demonstration against the reading down of Article 370, in Srinagar, during which they were detained. Photo: Mudasir Ali

Srinagar: A group of women led by members of the Abdullah family were detained by police and shifted to Srinagar’s central jail on Tuesday as they tried to stage a protest demonstration in the heart of Srinagar city against the scrapping of J&K’s special status.

The group, led by Safia Abdullah and Suriya Abdullah, were bundled into two police vehicles and whisked away from Lal Chowk, the commercial hub of the Valley.

The women from the Abdullah family led the group and staged a demonstration against New Delhi’s unilateral decision to scrap Article 370 and bifurcate the state into two Union territories.

The group arrived in Lal Chowk at around 11 am but was prevented by the police from staging a protest at Press Enclave which houses all media organisations. Women protesting against the decision to read down Article 370. Photo: Mudasir Ali

“Why downgrade Jammu And Kashmir State”, “Resist to exist” and “Respect fundamental rights” read the placards that members of the group were carrying.

“We demand the restoration of our civil liberties and political rights,” Suraya told reporters as she was being whisked away by the police. “Whatever is happening in Kashmir for the past two-and-a-half months can in no way be described as normalcy.”

A senior police official said the entire group of women including Safia and Suraya of the Abdullah family were taken to the central jail for defying prohibitory orders.

Unprecedented restrictions were imposed across Kashmir and all means of communication – mobile services and the internet – were suspended on August 5, the day government of India read down Article 370.

Fearing a backlash in Kashmir, the state government arrested scores of politicians, lawyers, businessmen and youth. According to a report more than 4,000 persons were arrested since August 5 and over 300 people were booked under Public Safety Act (PSA).

Though the government has lifted restrictions on movement and restored post-paid mobile services, the internet remains suspended and pre-paid mobile connections are still blocked. 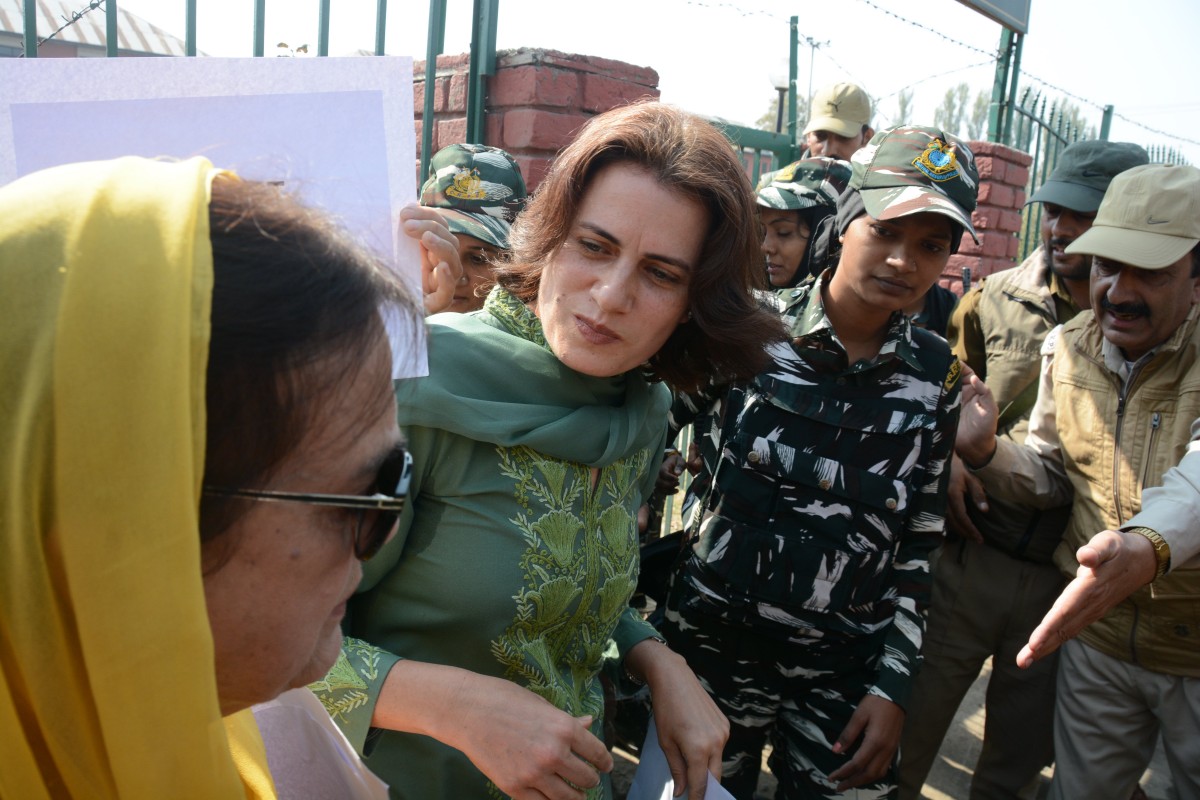 Safiya, daughter of Farooq Abdullah, during the protest demonstration in Srinagar on Tuesday. Photo: Mudasir Ali

There is also no word from the government regarding the release of political detainees. Omar Abdullah and another former J&K chief minister Mehbooba Mufti are among those who have been jailed or put under house arrest by the state government. The senior Abdullah, who is a sitting MP from the Srinagar Lok Sabha seat, has been booked under the PSA and kept under detention at his Gupkar residence.

Under the Public Safety Act (PSA) a person can be detained without trial for up to two years.

“We are here to express our anger against the decisions taken by the Centre on August 5,” said Hawa Bashir, a social activist. “India is projecting that Kashmir is happy with the decision. We are here to tell the entire world that we are angry against this unilateral decision,” said Bashir. Academic Muslem Jan and other protesters being whisked away by the police in Srinagar on Tuesday. Photo: Mudasir Ali

This was the first protest demonstration by an all-women group held in the heart of Srinagar in the past two months.

“We the women of Kashmir disapprove of the unilateral decision taken by the government of India to revoke Article 370, Article 35A and downgrade and split the state of Jammu and Kashmir,” said a statement issued by the group. “We feel betrayed, humiliated and violated as people”.

The women group also demanded the immediate release of all detainees and called for the demilitarisation of the rural and urban areas. “We express our outrage against national media for their false/misleading coverage of ground realities in Kashmir,” the statement read.