When Dr Syed Maqbool pleaded with police to let him call the hospital so that they could replace him for the day, they allowed him only on condition that he would not be able to tell them where he was. 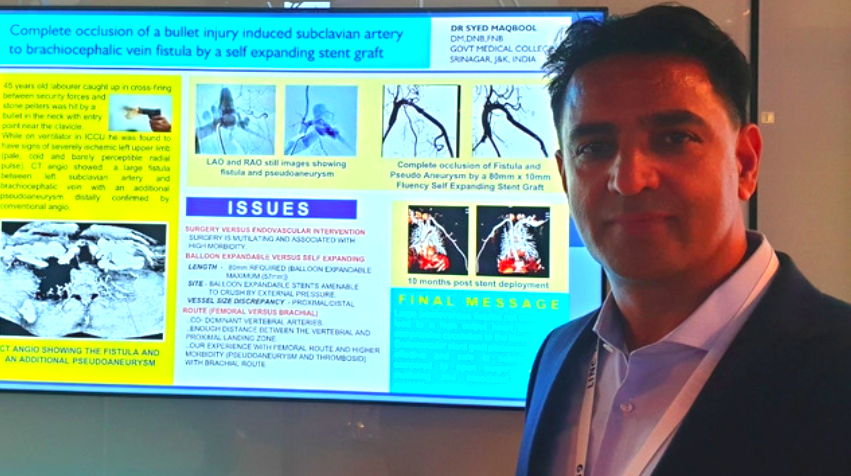 Srinagar: A senior doctor at a Srinagar hospital on Monday said he was allegedly beaten by police and “detained illegally” for around eight hours when he was on way to work.

The incident has left Dr Syed Maqbool, a senior interventional cardiologist at the city’s Super Specialty Hospital, shocked. “What was my crime?” he said. “All over the world the doctors are treated as heroes for putting their lives at risk in these times. But the way I was humiliated is horrifying,” said Maqbool.

Maqbool said he was on way to the hospital on May 23 – a day before Eid – when a policeman stopped his car near Hawal Chowk in the city’s downtown area and asked to turn back and take another route.

“I showed him my identity card and a copy of my duty roster. I was on call to attend to some emergency cases,” he said.

“This enraged him and he hit me in my belly with his baton. Then, the local SHO, Javaid Ahmad bundled me in his car and took me to the police station Zadibal,” recalled the doctor.

On reaching the police station, the doctor said, the police officer snatched away his phone. “As I pleaded with him to let me make a call to the hospital authorities so that they can arrange for some other doctor, he shouted back ‘you doctors are thieves and you prescribe spurious medicines. You have nothing to do with COVID-19. This is the battle of police. Let your hospital and let your patients go to hell’,” said the doctor.

The doctor said since he was not allowed to leave the police station, he again pleaded with the police officer to let him make a call.

“I even apologised to him, hoping he will let me go,” said the doctor. “But, instead he threatened me saying, ‘If I don’t keep quiet, he will book me under such a section that I will be jailed for next 10 years’.”

In the meantime, several of his patients had reached his downtown home looking for him.

At around 3.30 pm, the doctor said, the police officer agreed to let him make a call on the condition that he would not disclose to anybody that he has been detained at the police station.

That is when the doctor called a senior colleague at the hospital and asked him to attend to his patients as he had run into some kind of emergency.

The rush of the patients outside his home, however, alerted his family to the fact that something was wrong. At around 6 pm, Maqbool’s brother rushed to the police station and that is when the medico was finally allowed to leave.

Maqbool rushed to the hospital.

“I walked for around six kilometres as police didn’t release my vehicle. I attended to patients till 1 am,” the doctor said.

The next day, Maqbool said, he again left for the hospital at 7 am, and did three surgeries till 1 am on the following morning.

Early this morning, the doctor took to Facebook to write about the experience. “I haven’t been able to sleep for the past two nights. I keep on thinking what I have done to deserve this kind of treatment,” said the doctor.

This afternoon, the doctor said, the Inspector General of Police (IGP), Kashmir, called him and “apologised” for the incident. “He said a wrong has happened. He assured me justice will be surely done.”

In a statement this evening, the IGP said he has ordered an impartial inquiry into the incident. “…Whatever incident has taken place, we shall look into it, conduct impartial inquiry and take due action,” the IGP said, adding he has taken a strong notice of complaints appearing in media about “police personnel discharging their duties on the roads.”

The incident has led to outcry from the medical fraternity. While condemning the “abusive behaviour” of the police officer, Medical Faculty Association of Kashmir termed the incident unfortunate.

Referring to the incident, Dr Saima Rashid, principal of the Government Medical College (GMC) Srinagar, tweeted, “The behaviour of the police has been deplorable to say the least – we as frontline workers have been working day in and day out risking our lives and families only to be harassed.”

Maqbool’s hospital, like other tertiary care health institutes in the city, functions under the administrative control of the GMC.

An official said Rashid has taken up the matter with the IGP, commissioner secretary of health and divisional commissioner of Kashmir and sought action against the police officer.