While civilians say the elderly and children face difficulties during the operations, members of the security forces say increased militant activity necessitates the missions. 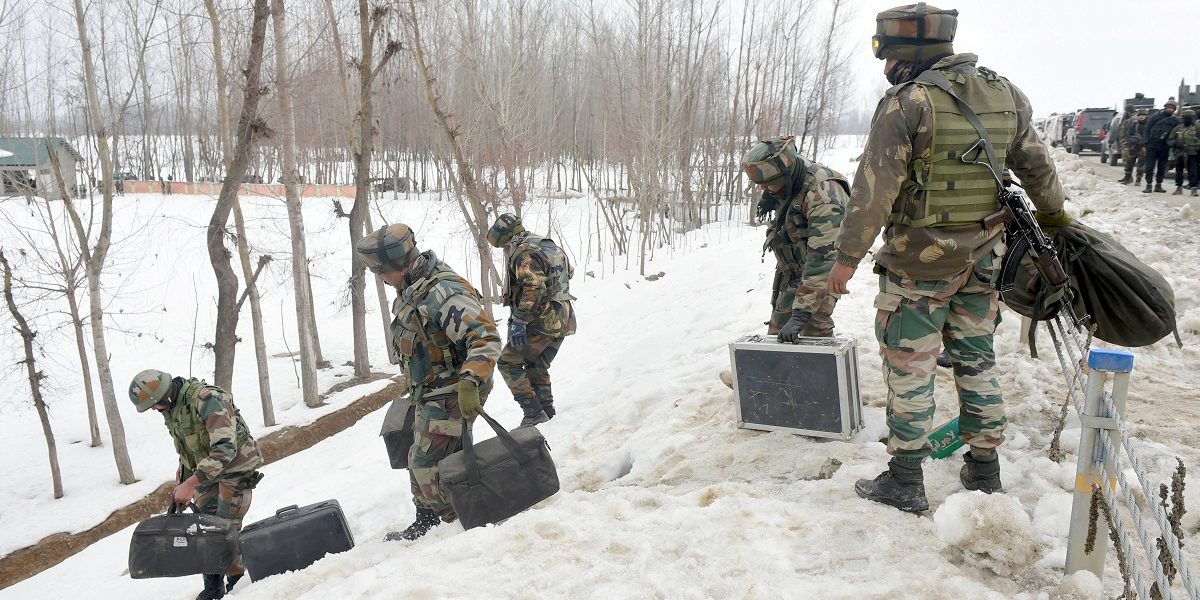 Srinagar: Even record-breaking cold temperatures have not discouraged the security forces in the Kashmir Valley from routinely conducting cordon and search operations (CASO), leaving the ailing, old and children to face the brunt of the chilly conditions.

The regular anti-militancy exercise is conducted by security forces in residential areas of the Valley. People are lamenting that these operations cause massive inconvenience to ordinary citizens, especially the vulnerable.

This means that people are asked to come out of their homes in the bone-chilling cold so that security personnel can conduct searches to trace militants.

During the Chillai Kalan, the 40-day period of harsh winter, the joint forces led by the Army’s Rashtriya Rifles, Jammu and Kashmir police and Central Reserve Police Force (CRPF) have launched dozens of operations to trace militants.

Police sources say the search operations can start any time of the day and at any location, based on specific inputs that the security agencies receive about the presence of militants.

During the severe chill of Chillai Kalan, security forces have launched many nocturnal CASOs, mainly in the rural areas of Kashmir. These operations usually start during the early hours of the morning and can continue until the evening. For respite from the cold condition, people usually prefer to stay inside their homes. This year, the unrelenting cold broke a 30-year-old record in Srinagar. The city recorded its coldest night on January 31, with the temperature dropping to -8.8 degrees Celsius.

The rest of the Valley is also reeling under the intense cold that has frozen several water bodies, including a portion of the Dal Lake.

People that The Wire spoke to said that CASOs cause huge hassle to everyone.

Villagers in Rawalpora hamlet of south Kashmir’s Shopian district told The Wire that apart from cordon and search operations, the security forces are also conducting nocturnal raids in different areas of the village, arresting people.

A university student, requesting anonymity, told The Wire that Shopian is freezing with temperatures falling to -15 degrees Celsius. But the raids and anti-militancy operations continue, putting people at a huge inconvenience. On the one side, doctors recommend that people stay inside their homes but on the other, people are asked to come out of their homes despite biting cold. Asthma patients, COVID-19 patients and children who have respiratory problems are also forced to come out during the search operations,” said the 28-year-old student.

He added that it is no surprise that the security forces are conducting these operations during the biting cold. “If cordons and raids were conducted during the COVID-19 lockdown last year, it was foolish to expect that the cold would stop these exercises. The military crackdown, in fact, started during the Chillai Kalan of the 1990s. The Gawkadal, Sopore and Kupwara carnages, and even the Kunan Poshspora mass rapes took place during the chilling winter only,” the student said.

In the nearby Avind village, an orchardist recalled that recently, he and his friend were asked by the security forces to vacate the house. “On December 12 last year, it was snowing. My friend and I were busy packaging apples. Suddenly, our house was cordoned by security forces from all sides. Amid the snowfall, we were asked to come out,” the apple orchardist told The Wire.

Thirty-year-old Shabir Ahmad (name changed) of Mandoora village of Tral in south Kashmir narrated his experience. “At 8:30 am, when it was cold outside, I was still in bed waiting for it to get a little warmed. Suddenly, I heard some noise and I quickly came out. To my utter surprise, I found my courtyard filled with members of the Army. I was asked to lead my family members out, with our hands held up. My little baby was sleeping, but I had to bring her out despite the freezing weather conditions. My wife and baby left for another colony, and I was asked to go inside my house while the security forces searched my house.”

On a chilly January morning, the people of Nadimarg village in Shopian were woken up to an announcement. “The entire village is cordoned off,” they could hear. People The Wire spoke to said that due to the winter, the problems that people face are already manifold. The military operations aggravate the situation further, they said.

Naseema (name changed), a young woman, said that CASOs violate the privacy and people undergo mental torture. “In the freezing temperatures, when we try to sleep early, we fear that a CASO may be conducted in our colony. We start worrying less about ourselves and more about our children and the elder members of the family,” she said.

A DSP rank police official who has been the part of anti-militancy operations in north and south Kashmir told The Wire that CASOs are launched based on the inputs security agencies receive. “Irrespective of weather, situation and location once the nodal officer gets the input the operation is launched to kill the militants,” he said.

Another CRPF trooper posted in the valley admitted that CASOs cause inconvenience to people as well as to the troopers on duty. “What can we do, when our duty demands us to launch such operations during this harsh winter. When the militancy in a particular area increases, the need to conduct these operations also increases,” he said. 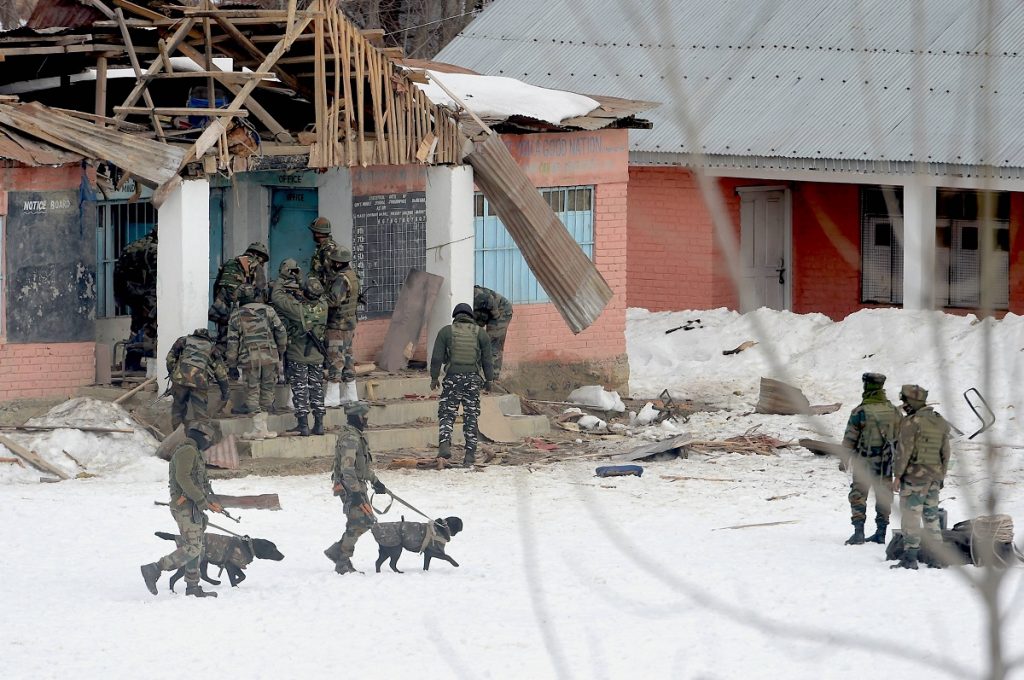 Security personnel inspect an area after a militant attack on Road Opening Party (ROP) of the Army at Shamsipora in Kulgam District of South Kashmir, January 27, 2021. Photo: PTI/S. Irfan

In May 2017, the Army decided to re-introduce CASOs, locally called as “crackdowns to eliminate militancy”, nearly 15 years after the practice was abandoned.

During the 1990s, CASOs were accompanied by crackdowns, during which the adult male population of an entire area would be asked to exit their houses and made to sit or assemble at one place and paraded before a masked informer.

The Army had discontinued CASO following stiff opposition from the local population. After 2001, it launched these operations only on specific intelligence-based inputs.

The security establishment felt that CASOs had alienated the local population due to the difficulties they bring.

However, the decision to reintroduce CASO as a major feature of counterterror operations comes against the backdrop of anger over the killing of young and unarmed Kashmiri army officer Lieutenant Ummer Fayaz in Shopian by militants. In May 2017, the first operation was launched in south Kashmir’s Shopian district.

CASOs often culminate into encounters that lead to the killings of militants as well as civilians. In July last year, three youngsters from Rajouri were gunned down in a fake encounter in Shopian district.

Over the years, the security forces have been accused of harassment and ransacking of property during CASOs, including molestation of women and detention of civilians.

According to a report published by the Jammu and Kashmir Coalition of Civil Society, at least 540 CASO’s were conducted in 2017, i.e. more than one per day on an average. In the same year, joint forces carried 376 anti-militancy operations in Awantipora police district alone, as some of the top militant commanders like Zakir Musa, Sabzar Bhat and Riyaz Naikoo were active in the areas falling under their jurisdiction.

In 2018, 275 such operations were launched across Jammu and Kashmir. However, in the same year, the army announced that CASOs will be stopped during the month of Ramadan.

From January 1 to June 30 last year, at least 107 CASOs and cordon and destroy operations (CADOs) were conducted in J&K, which the security forces said resulted in the killing of 143 militants.