Why Has the 'Back to Village' Programme Failed to Take-Off in Kashmir?

The third round of the public outreach initiative was held earlier this month, but saw low participation of locals.

Srinagar: It has been 12 years since 55-year-old widow Raja Bano lost her husband Basheer Ahmad Naikoo. To meet her daily expenses every month, she has to travel 17 kilometres from her village Qammer in Kapran Verinag area of south Kashmir’s Anantnag district to collect her monthly widow pension of Rs 1,000 from the bank.

There is no bank near her village, due to which every month she has to go to the Jammu & Kashmir Bank’s branch in Verinag, where she stands in long queues to receive the pension.

According to Bano’s neighbour Roy Altaf, there are hundreds of women who rely on the pension but due to the unavailability of a bank near their homes, the aged, poor and ailing face massive difficulties. “Due to the huge rush of pensioners, people remain in long queues and there is no one to help them,” he says.

In June 2019, however, amid high hopes and expectations, hundreds of villagers in Kapran participated in the public outreach programme ‘Back to Village’ (B2V).

With the involvement of the people and government officials, the programme is a joint effort to deliver the mission of “equitable development”. It aims to energise panchayats and streamline development efforts in rural areas through community participation.

During the first round of the programme, the number one demand put forward by people in the Kapran region was that a bank branch should be opened there. This has not been fulfilled yet.

A second B2V programme was held in November, and on October 2, the third round began and continued for ten days.

Government officials, including Lieutenant Governor Manoj Sinha, administrative secretaries and district development commissioners visited the villages to assess the progress of the decisions taken up during the first and second rounds of B2V and the pending grievances of the people. 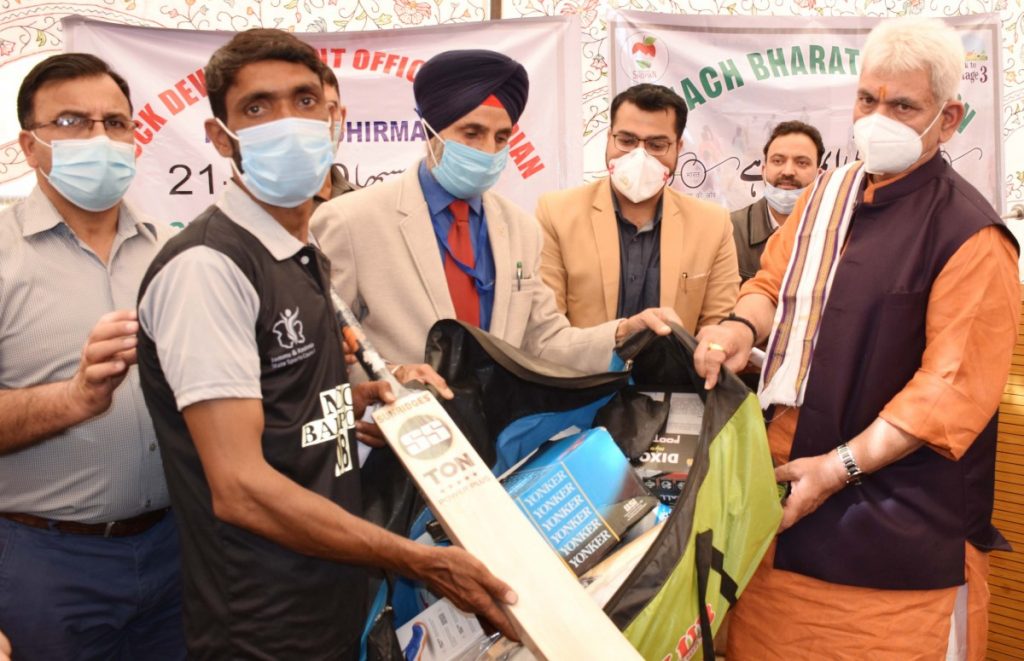 J&K Lt Gov Manoj Sinha distributes sports kits as part of the Back to Village programme. Photo: By arrangement

“People participated in the first two rounds of the B2V programme with massive enthusiasm, but this time they stayed away. When the demand for the establishment of the bank was not fulfilled, the people decided not to participate in the third programme,” said Altaf, speaking to The Wire.

Verinag block development council chairman Peer Shahbaz Hussain admitted the lack of public participation in the third B2V programme. He also hinted that the failure to implement the demands made during the previous rounds was the reason for the failure of the third programme. “There are 19 panchayat halqas in Verinag and only a few people participated in the B2V programme. The reason for low public participation is that demands raised by the people in the previous rounds are yet to be fulfilled. For instance, the government could not establish a bank branch in Kapran and sadly, adequate staff and machinery has not yet been sanctioned for local primary health centres,” says Hussain.

A plethora of reasons

During the past few weeks, local newspapers in Kashmir carried many government advertisements announcing the third edition of the government’s B2V programme. Despite that, for a host of reasons, the people this time around largely stayed away from the programme. While the non-fulfillment of promises made during the previous rounds is one of the reasons, the political uncertainty in the Valley and the ill-timing of the programme with farmers and orchardists busy harvesting their crops also played a role.

Abdul Rashid Dar, a fruit trader in north Kashmir’s Shahgund village, said that hardly anyone attended the third B2V as the roads in their village continue to remain dilapidated and the entire area has been reeling under a severe shortage of drinking water. “Both these issues were taken up with the officials during the first B2V programme but to no avail,” says Dar.

In Central Kashmir’s Kurhuma village of Ganderbal district panchayat, sarpanch Ghulam Mohammad Rather says people have lost faith in the programme mainly because the government has failed to fulfil the promise of providing employment to villagers who have provided their land for the establishment of the Central University of Kashmir.

“People who provided land were told that besides compensation, one of their family members will be employed in the university. But no employment opportunity was given to anyone. In the previous rounds of the B2V programme, the people highlighted the matter before officials but it was sidelined. Trust deficit has developed with regards to the programme,” says Rather, who became the sarpanch as an independent candidate.

Samboora village in Pampore, which was considered as one of the volatile villages in south Kashmir, also witnessed little participation during recently concluded third round of B2V.

Talking to The Wire, he said that given the decision to dilute Article 370 in August 2019 has led people not to trust the government anymore. “People in our village believe that the B2V programme has nothing to offer,” he says, adding that there is not just anger among the people but also “tremendous fear”.

In the Rawalpora village of Shopian district, locals said they were busy harvesting their apples when the third round of B2V was held. “During the first B2V visit, the officials took note of many issues the village has been facing for several years, but nothing happened thus far. The government failed to resolve even minor issues, so people consider it a futile exercise. How do you expect good participation of residents in such programmes?” asks 25-year-old post-graduate student Ahmad.

Some officials also admitted that the third round was held at the ‘wrong time’. “The government should have done some homework and realised that October is the crop harvesting season in the Valley. People largely remain engaged in their orchards and fields. The third round should not have been conducted at this time,” says another senior officer who performed B2V duties in Pulwama district.

He adds that when no one appeared before the officials, they went to the houses, farms and orchards to meet the people and listen to their concerns. An apple orchard in a village in Shopian district. Photo: Raashid Hassan/File

Reacting to the programme, J&K Pradesh Congress Committee president Ghulam Ahmad Mir said that the exercise has disturbed the “entire machinery and people” but it has not shown any results.

“Not a single work was carried out in the previous rounds. It is to accommodate the ruling party workers, especially in those panchayats where elections could not be held, which numbers to over 13,000 seats,” Mir said, addressing a press conference at the party headquarters in Jammu.

The J&K National Conference termed the programme mere eyewash. The party general secretary Ali Muhammad Sagar said that the government has failed to address and assess the specific economic potential and the needs of the villages.

Sagar, while interacting with scores of delegations at the party headquarters, says the B2V exercise was an “illusionary” one that has failed to enthuse people and provide anticipated results. “Unfortunately, there has been no follow up to earlier B2V exercises, which has rendered this new phase a sheer mockery. Non-observance of the official commitments in the previous two rounds of B2V is widening the trust deficit between people and the officials. The absence of a robust redressal mechanism has therefore rendered the entire exercise ineffective,” he said.

A senior official in the administration, however, claimed that the B2V programme is a success and that the development works identified during the first and second rounds are in the pipeline.

Irfan Amin Malik is a journalist based in Jammu & Kashmir. He tweets at @irfanaminmalik.