'We Are Sure They Have Him': Enforced Disappearances Continue to Haunt Families in Kashmir

From the 1990s to today, hundreds of families have no information about where their loved ones are. 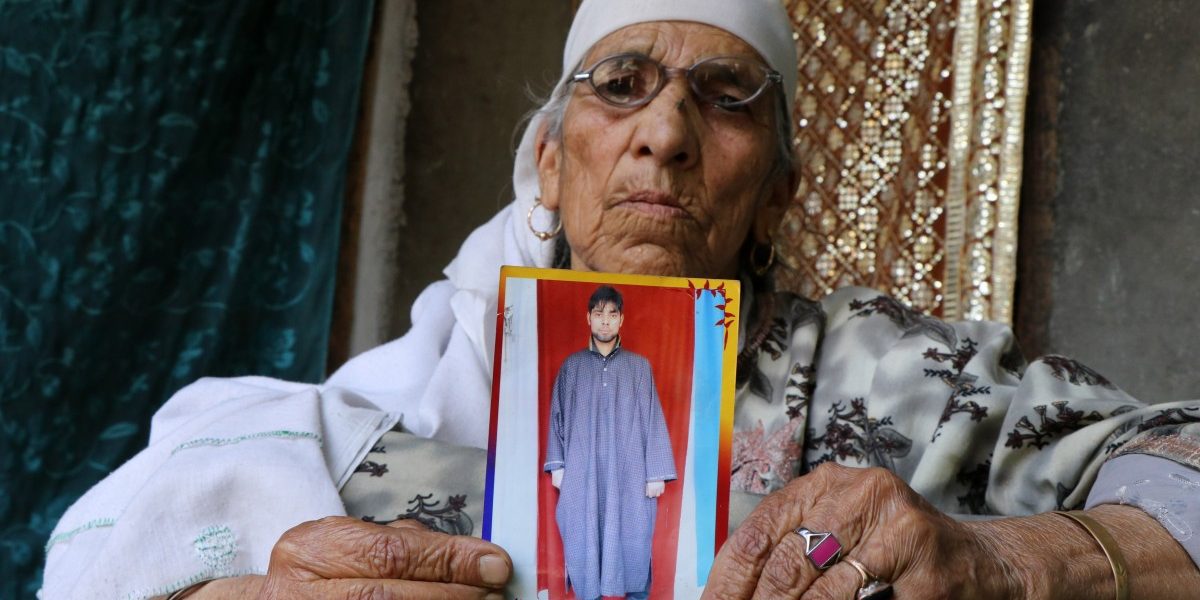 Srinagar: For Kashmiris whose kin have allegedly been subjected to enforced disappearances since the 1990s by the Indian security forces to counter homegrown insurgency, only bitter memories remain.

“We are sure they have him – dead or alive, we don’t know,” asserts Mohmmad Hussain from Doompora village, in south Kashmir’s Shopian district. His son has been missing for the last five months. Hussain’s last memory of his son is him being taken away by the army.

On November 29, 2019, at around midnight, Hussain’s family heard an unusual knocking on the door. Quickly, the knocking turned into pounding. All family members except Hussain huddled in the room farthest away from the door, shaking with fear and anxiety.

Hussain took measured steps towards the door. As he opened it, a storm of army men brandishing guns rushed in, looking for his son Naseer Ahmad. “They destroyed everything that came in their way; rugs, curtains, furniture, everything,” said Hussain, a farmer.

Fearing that the army might take Naseer away, women in the family started protesting against the unexplained action. In response, the army locked them in a room, the family says. “They jailed us in our own house until they took him away along with everything that could remind us of him – clothes, mobile phones and even his bat,” recounts Naseer’s grandmother.

Hussain says he tried to follow his son, who was being put in an army vehicle parked outside the gate, but he was forced to step back when the army warned him of dire consequences. “My son was shouting, ‘Baba! Baba, don’t let them take me,’” narrates Hussain, his voice cracking.

The next day, when Hussain and a few senior members of the village went to file an FIR at the Keegam police station, they were immediately turned away and told to go to the army camp instead. Hussain did as they said and went to the Shajimarg army camp. “As we reached there, we were asked to come the next day and assured of Naseer’s release.”

Hussain went back home, hoping his son would be back the next day. The same night, however, the army came to his house and told the family that they had released Naseer. “We were told that he had left with someone on a bike. When we demanded the person’s information or contact number, they left without answering,” claims Hussain.

Also read: Kashmir: After 19 Years, Victory for Mother of Man Who Disappeared in Army Custody

Kashmir has been witnessing disappearances like Naseer’s since the 1990s. According to data collected by rights group Association of Parents of Disappeared People (APDP), 8,000-10,000 civilians have been subjected to enforced disappearances in Kashmir. Hundreds of families remain unaware of whether those they have lost are dead or alive.

“If someday he would hear about an army raid going on in some village, he would shiver,” says Naseer’s neighbour. He was extremely “calm and a faint-hearted”, she continues, unlike most children in Kashmir who grow up witnessing violence and turmoil. “So we know he is not guilty, and that’s why no one in this village is ready to give up on him.”

On being asked whether his son could have joined the militancy, Naseer’s father smirked. “Even if it is true, then why was he released by the army after interrogation in the first place?” he asks. “Or if he decided to join the militancy afterwards, what could have been the trigger if not an unreasonable arrest?”

While echoing the same argument, Khurram Parvez, a prominent Kashmiri human rights defender, says, “If he was picked up from his house, he should have been dropped at the same place.”

Parvez further explains that if a person is arrested he/she has to be produced before an executive magistrate within a certain time period. “And in Naseer’s case, nothing was done in accordance with the law,” he asserted.

In Kangan town of central Kashmir’s Ganderbal district, another family is waiting for their son. He went missing on June 22 this year, leaving an ill father, mother, wife and 2.5-year-old daughter.

“The number that you’re trying is currently switched off, please try again later,” is the automated response that comes every time Ghulam Hassan Wani call his son, Noor-ul-Hassan.

“He keeps dialling his number all the time, thinking that he might switch on his phone and pick up his call,” says Ghulam’s daughter, who has been staying with her father since Noor went missing.

The last time Noor’s sister talked to him, he told her that he is on his way home. Usually Noor, who is a medical assistant in the National Rural Health Mission (NRHM as well as a pharmacist, would return by 8:30 pm but that day, he did not. “We called to ask him whether he would make it to the dinner but he did not respond,” recalls his sister. She kept trying Noor’s phone, until an automated voice said that the number was switched off.

The next morning, a relative told the family that he had seen Noor crossing a bridge that goes towards his house. Ghulam and his family started looking for him everywhere, until they were informed that his car had been found abandoned near Manigam area. 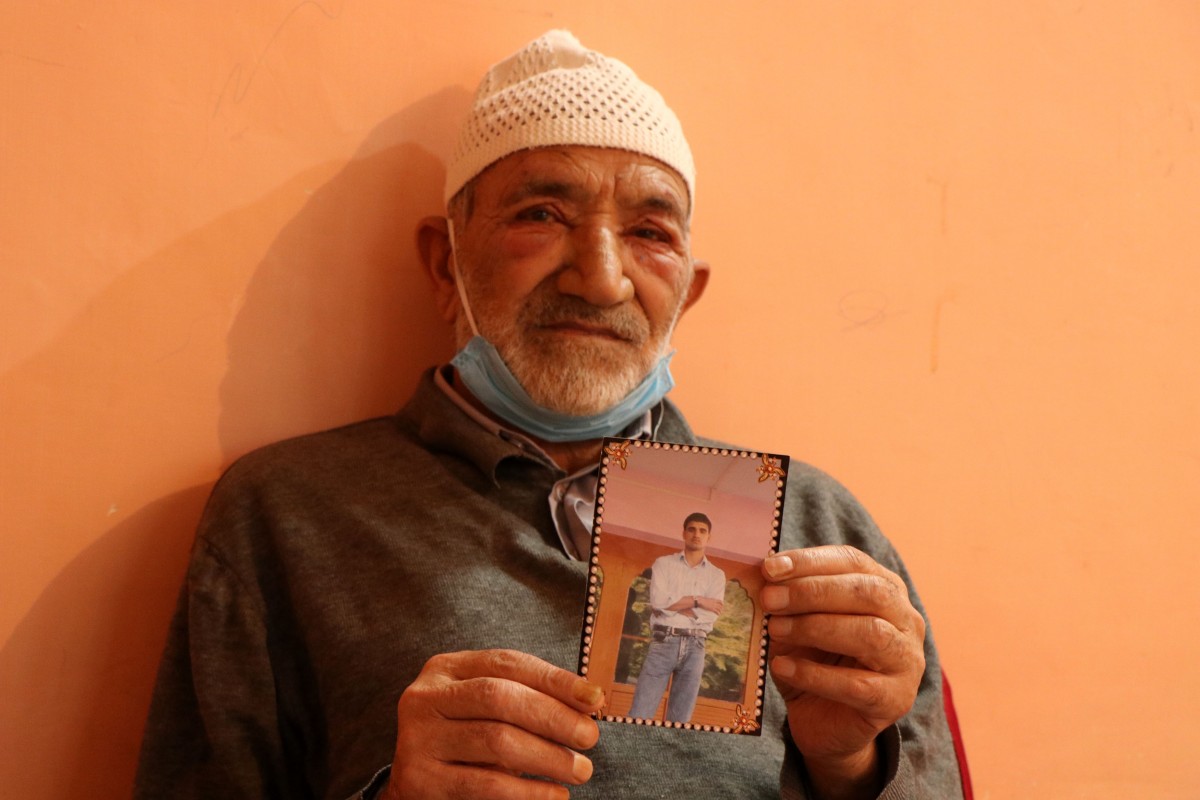 Talking about the damaged state of car, Hassan claims that his son was kidnapped from the spot. “Since then we have had no information about him.”

“We went to many officers, including the special operation group of J&K police Kangan, DSP and the SP. They all maintain the same narrative – that they don’t know anything,” claims Noor’s father.

Ganderbal police said efforts to trace Noor are on. “We are investigating the case and have set up a special team to find him,” says Khalil Poswal, SSP Ganderbal.

At the corner of the room sits Noor’s mother, Mehmooda, holding a photograph of her son. “Why do we know nothing of him, why?” she asks, her voice trembling and tears running down her cheeks. Pulling herself together, she says, “If he has been killed, we should be handed over his body.” She implies the possible role of the army in his abduction.

Assurances from the police fail to assuage her apprehensions. She feels that enough efforts are not being made by the police and the administration. “If we live in a democracy, how is he still untraced?”

Parvez links these cases of ‘disappearances’ with a pattern visible in Kashmir for the last three decades. “In conflict situations when people disappear mysteriously, because of the context we are living in, people suspect that they could have been abducted or killed by the armed forces,” he said.

In some cases, they are proven right sooner rather than later. Recently, the Indian Army accepted that two young men and a minor boy from Rajouri, Jammu who had gone missing were killed in Kashmir’s Shopian in July – and that the army exceeded powers under the Armed Forced (Special Powers) Act while killing them. The three families had been insisting that their sons, labourers who had gone to Shopian to work, had been abducted and killed by the army.

Hibah Bhat is a freelance journalist based in Srinagar.