After 17 Months of Taliban Captivity, Kali Mahato Finally Gets Time to Take a Breath

Speaking to The Wire, the freed Jharkhand resident speaks about freedom and what the future holds.

New Delhi: Kali Mahato is finally home. After 17 months of being held captive by the Taliban, he is now at his dusty, small village in Jharkhand.

It was from this village, with a population of around 1,000, that Kali Mahato left in 2016 to earn a living for his second stint in Afghanistan. He was supposed to have returned to India after his contract ended in June last year – but his stay was a bit longer than expected.

He was one of seven Indians who were kidnapped on May 6, 2018 from the northern Afghan province of Baghlan. Out of the seven, four were from Jharkhand, two from Kerala and one hailed from Bihar. They were all employees of an Indian company, KEC International Limited, working to build transmission lines for Afghan state-owned firm, Da Afghanistan Breshna Sherkat (DABS).

Out of the seven, one Prakash Mahato was freed in March this year.

The news about the latest release of three Indians on October 6 was first reported by a Pakistani newspaper. Ten days later, they finally landed in India and returned to their homes. The Indian government has, so far, not publicly commented on their release.

Speaking on phone from his village Beram in Tati Jhariya tehsil, Kali Mahato said that he is still getting used to freedom. “Abhi bhi bahut ajeeb lag raha hai (I am still feeling a bit strange)”.

Also read: Amidst Official Silence, What We Know About the 3 Kidnapped Indians Freed in Afghanistan

When he and six other Indians were kidnapped on May 6, 2018, they were on way to their worksite.

This was the second time that Mahato was in Afghanistan. After working there from 2014 to 2016, he got a break of a couple of months before travelling back again as a technician on the project.

When asked whether he was ever warned about the security situation in the country, Mahato says, “Everybody told us, but we said, ‘Don’t worry… we will be safe’.”

He also claimed that there were no security personnel with them when they were abducted. “That was normal. We never had security with us.”

With their hands tied and eyes covered, it was the start of a period of their life of constant transit for the next one-and-half-year. 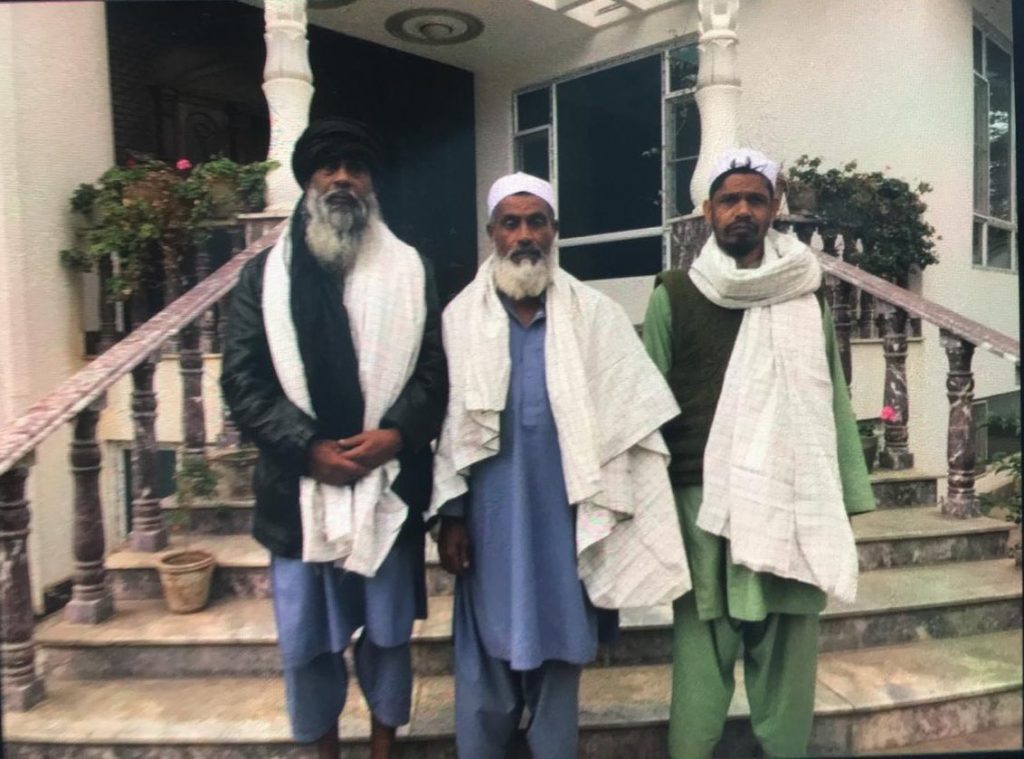 The first photograph of three Indians who were released on October 6 by the Taliban. Kali Mahato is first on the right. Photo: Twitter

Meanwhile, back home, the media did not name the men initially, but the families figured it out after their calls went unanswered. In the initial days, the Indian government took visible steps – phone calls and letters between the external affairs minister and national security advisor to their counterparts. The Indian embassy had also gotten in touch with the families. Eventually, the news receded to the back pages before completely disappearing, as the MEA insisted that the matter was too sensitive for constant updates to be provided to the media.

According to the South Asian Terrorism Portal, more than one score Indian nationals have been abducted in Afghanistan since 2003.

As information became scarce, the families of the kidnapped men trekked up to New Delhi, hoping to get an audience with the foreign ministry.

There were plans to hold a demonstration in front of the MEA’s office in Delhi to put pressure on the Indian government, but that changed after officials assured them of a meeting with then-external affairs minister Sushma Swaraj. There were a few delays, but Swaraj did meet the families and assured them that they were doing all that was possible.

A local social activist in Bagodar, Sandeep Jaiswal, who had been helping the families in Jharkhand, stated that after many requests, the company agreed to deposit the monthly salary of the men directly to the families.

In Afghanistan, Mahato had no idea about what was happening in India – or importantly, their own immediate fate. “We were just afraid that we would be killed anytime”. The seven were always kept together and had around 10-12 armed men guarding them all the time.

Though it was difficult to gauge how much time has passed, Mahato believes that they were moved every two or three months to a new location. Sometimes, their location seemed to be in the midst of a village. “We thought it was inside a village as we could hear the sounds of children several times in the vicinity.”

Asked if they ever asked their captors why they were kidnapped, Mahato replied in the assent. “They told us that they didn’t want money. They just wanted their leaders, who were under arrest, to be free.”

He also indicated that they were handed over to new guards every few months. Mahato also signalled that their treatment at the hand of their captors – besides the overwhelming reality of their captivity – had been benign. They were informed that their religious sentiments will not be hurt. However, they were not allowed to shave or cut their beards.

Fear dissipated after one captive’s release

Mahato recounts that their sense of constant fear only dissipated after the first of their group, Prakash Mahato, was freed in March this year. “They (kidnappers) told us that he was freed as around ten of their people were released. They told us not to don’t worry and that we would also come back to India.”

When Prakash Mahato returned home, the Indian government acknowledged his arrival with a short press note. But after that, the whereabouts of Prakash Mahato and his relatives are unknown, as they did not apparently go back to their village in Jharkhand, said Jaiswal, who is also a youth affiliate of the CPI(ML).

Eight months later, it was the turn of Kali Mahato, Kaushik and Muraleedharan to make the same journey.

According to various reports, the Afghan government has released 11 Taliban prisoners, including two former shadow governors, in exchange for the three Indians.

In the first photo of them after their release, which was circulated on social media, the three Indians were almost unrecognisable and can be seen wearing local clothes.

When he reached Delhi, Kali Mahato was welcomed by his son and wife. He also talked with the families of the other two captives from Jharkhand. “They are safe and will soon be free,” he assured them.

Sitting in his house in Beram village, where he has a stream of visitors, a clean-shaven Kali Mahato doesn’t yet know what will unfold in the future. His wife is adamant that he should never work abroad again.

The only question that he can’t answer is why he was released when the others were held back. “I don’t know why Prakash was freed earlier. And why me? How did they decide? Only they can answer that.”