The judicial enquiry report opined that a lack of intelligence and self-defence equipment led security forces to "panic fire" on the unarmed crowd, taking the lives of eight villagers. 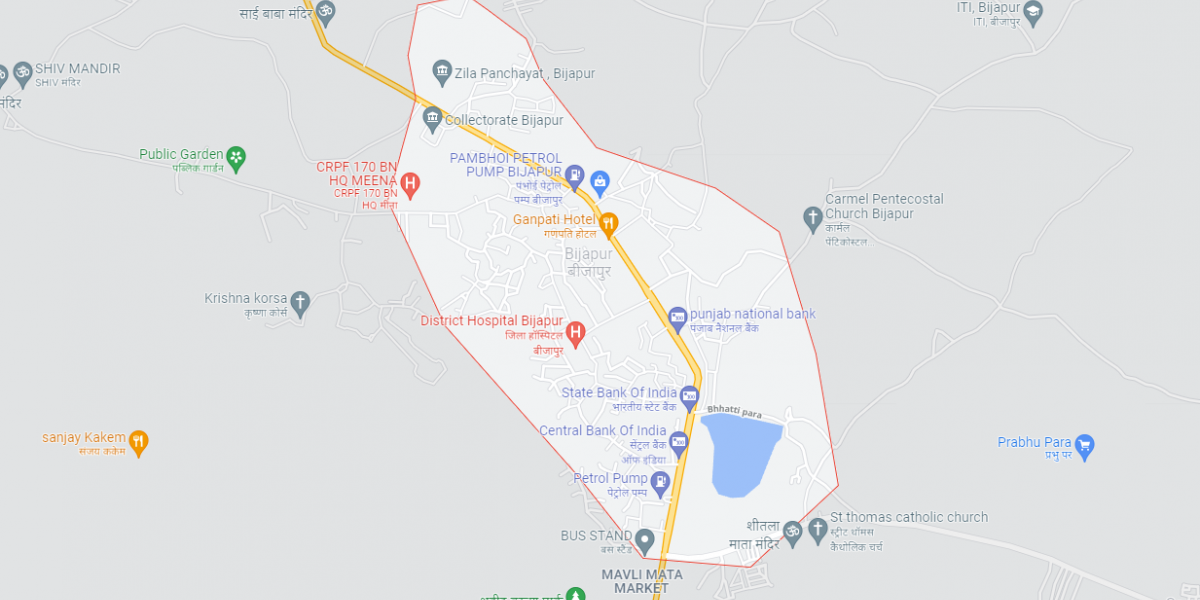 The Bijapur district of Chhattisgarh where the incident took place. Photo: Google Maps.

New Delhi: A judicial enquiry report into the 2013 encounter in Endesmetta in Chhattisgarh’s Bijapur district found that none of the eight people gunned down by security forces had been Maoists as had been alleged when the incident had taken place.

A report by the Indian Express stated that the enquiry report, submitted on Wednesday to the state cabinet by retired Madhya Pradesh high court judge V.K. Agarwal, opined that security forces may have opened fire on the unarmed crowd in a moment of panic. Out of the eight people who were killed, four were minors.

The Endesmetta incident had taken place on the night of May 17, 2013 where, according to Justice Agarwal’s report, 25-30 members of a tribal community had gathered to celebrate Beej Pandum, a festival where new life is worshipped in the form of seeds. A 1000-man group of the Commando Battalion for Resolute Action (CoBRA) unit of the Central Reserve Police Force (CRPF) arrived at the scene and opened fire on the gathering, which the report says was unarmed.

Endesmetta is a remote village in the Bijapur district, 17 km from the nearest road and 40 km from the district headquarters. It falls under the jurisdiction of the Gangaloor police station, which is among the worst-affected by left-wing extremism in Chhattisgarh. While state police had denied any presence of Maoists in the area, the CoBRA unit alleged that they had found a Maoist hideout.

Security forces had, at the time, alleged that they had been fired upon and began firing in retaliation. However, the enquiry report found that the CoBRA unit had been under no “threat-to-life” and had not followed marching formation norms.

Justice Agarwal’s report referred to the incident as a “mistake” in three different instances and noted that the security forces’ firing seemed to have been a case of “galat dhaarna, ghabrahat ki pratikriya” (incorrect assumption, nervous reaction).

While CoBRA constable Dev Prakash had lost his life during the incident due to a gunshot to the head, however, the report notes that this was a result of “friendly fire”. Two “bharmar” rifles had been seized from the incident but they had not been responsible for the bullet that killed constable Prakash.

The villagers’ accounts of the incident were in line with the report’s findings in this regard. At the time, Karam Manglu, one of the villagers recounted that, amidst the firing, security forces were heard shouting, “firing roko, humare ek aadmi ko goli lagi hai (stop firing, one of our men has been shot),” the Indian Express report noted.

The judicial enquiry also described the seizure of the two bharmar rifles as “suspicious” and “unbelievable” and also criticised officers for not including the items in the seizure report and failing to send any of the evidence collected from the scene to be forensically analysed.

The report noted that the incident likely occurred due to the lack of intelligence or devices for self-defence which caused the security forces to panic and open fire. It suggested the use of drones and other unmanned gadgets to avoid similar incidents in the future.

The Endesmetta incident was followed a week later by a Maoist attack in Jhiram Ghati in the Sukma district where 27 people, including state Congress leaders, lost their lives.

Justice Agarwal’s report has been accepted by the state cabinet. However, the retired judge’s earlier report on the Sarkeguda incident where, in 2012, security forces opened fire on and killed 17 unarmed tribals, is still pending with the state law department. In the case of the Sarkeguda incident as well, the locals had been celebrating Beej Pandum.