An FIR has been registered against unnamed ABVP members. 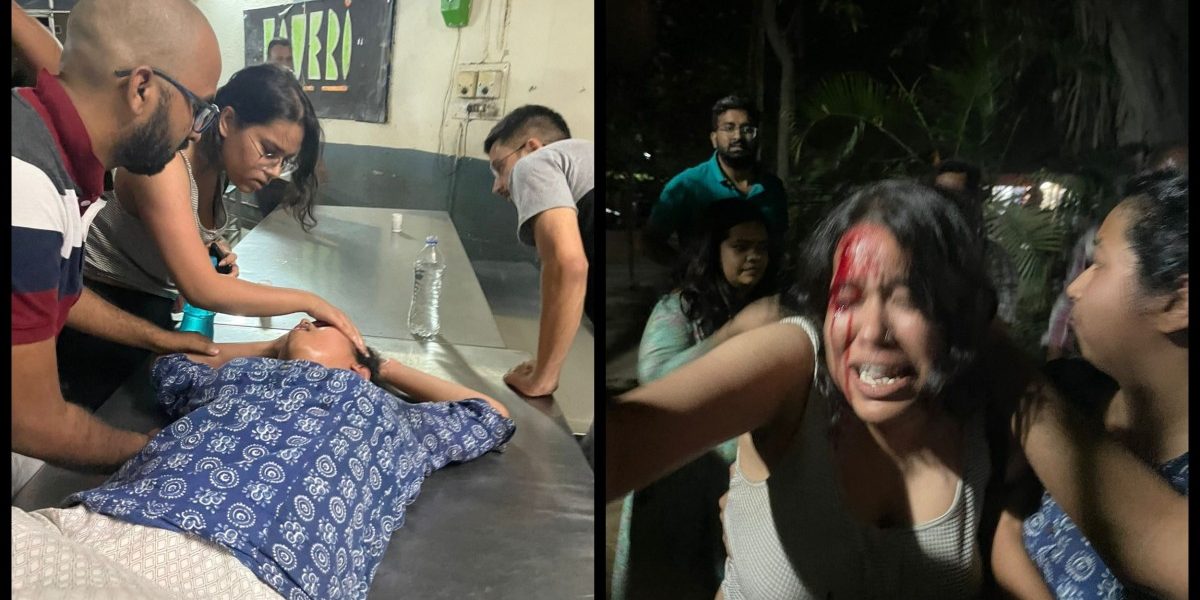 According to the police, six students were injured. Photos and videos of the incident circulated on social media showed a student bleeding from the forehead and another with injuries on his back.

Deputy Commissioner of Police (Southwest) Manoj C. said that they have received a complaint from a group of students who are members of JNUSU, SFI, DSF and AISA early Monday morning against unknown ABVP students.

“Accordingly, we have a registered an FIR under section 323 (voluntarily causing hurt), 341 (wrongful restraint), 509 (word, gesture or act intended to insult the modesty of a woman), 506 (criminal intimidation) and 34 (Acts done by several persons in furtherance of common intention). Further investigation is on to collect factual or scientific evidence and identify the culprits,” he said.

The JNU administration on Monday said that “no violence will be tolerated on campus” and warned the students from getting involved in any incident which disturbs peace and harmony on campus.

“Taking serious note of the incident, the Vice Chancellor, rector and other officials visited the hostel and met the students. The VC conveyed that no violence will be tolerated on campus and appealed the students to maintain peace and harmony,” the Registrar said in an official appeal to the students.

“JNU administration reiterates its resolve for zero tolerance towards any form of violence on campus. The students are also warned to refrain from involving in such incidents which disturb the peace and harmony on campus. If anyone is found indulging in such acts, they will be liable for disciplinary action as per university rules,” he added.

Delhi Police waiting outside headquarters prior the the students protest against violence in #jnu
.#NonVeg #JNUViolence @thewire_in pic.twitter.com/7aRhjsN2Gy

Versions of what happened

Students of Left-leaning groups on campus said the ABVP turned violent and attacked other students after they saw that non-vegetarian food was being served.

“Every Sunday, both non-vegetarian and vegetarian food is cooked in all hostels. This is the usual practice. ABVP students were having some event near Kaveri hostel and when the vendor came to deliver chicken, they stopped him. They harassed and heckled both him and the mess secretary, saying that a havan is being held and non-vegetarian food can’t be cooked,” claimed Anagha Pradeep, councillor, JNU Students’ Union (JNUSU), according to the Indian Express.

The ABVP on the other hand, claimed that Left groups had disrupted a Ram Navami puja on campus. ABVP activists however claimed non-vegetarian food was not an issue. “Common students of JNU were conducting a Ram Navami havan in the Kaveri hostel but the Leftists wanted to bring discord and came to prevent it from happening and stop people from joining. It was supposed to start at 3:30 pm but could only start by 5 pm because of the ruckus. No one objected to non-vegetarian food, this controversy has been created as a cover… An iftar party and the havan were taking place simultaneously in the hostel with no issues,” claimed Umesh Ajmeera, secretary ABVP-JNU, according to the newspaper.

Police said on Sunday night that the violence had stopped and the campus was now calm. “There is no violence as of now. A protest was held which is over. We are all positioned here with our team. On the request of the university, we have come here. We are trying to maintain peace,” Deputy Commissioner of Police (Southwest) Manoj C. was quoted as saying by PTI.

The Kaveri mess committee, which is run by students, supported the allegation that ABVP members were trying to stop non-vegetarian food from being served. The committee has written to the dean of students, asking for action to be taken against those people:

“Today, a group of people arbitrarily asked the meal manager not to cook non-veg (chicken) food for which he complied without informing the hostel and mess committee. The vendor who came to deliver chicken was verbally abused, threatened and manhandled. Students from outside of Kaveri hostel assaulted hostel committee members. The situation continues to be tense and we request immediate restoration of normalcy, which includes the pre-decided dinner menu of Kaveri hostel.”

The JNUSU released a statement alleging that the ABVP had made a concerted attempt using “muscle power and goondaism” to disrupt peace on campus. “JNU and its hostels are meant to be inclusive spaces for all and not one particular section,” it added.

Left groups held a protest outside the Vasant Kunj police station on Sunday night, asking for action to be taken against the ABVP members.

The last time violence had broken out on JNU campus was in January 2020, when masked men and women had attacked students and teachers, allegedly particularly targeting Muslim students and student leaders from Left parties. While an FIR was registered and several of these people were later identified in the media, no arrests have been made to date.