The team identified the attack as “targeted" violence intended to intimidate and instil fear into the students and faculty. 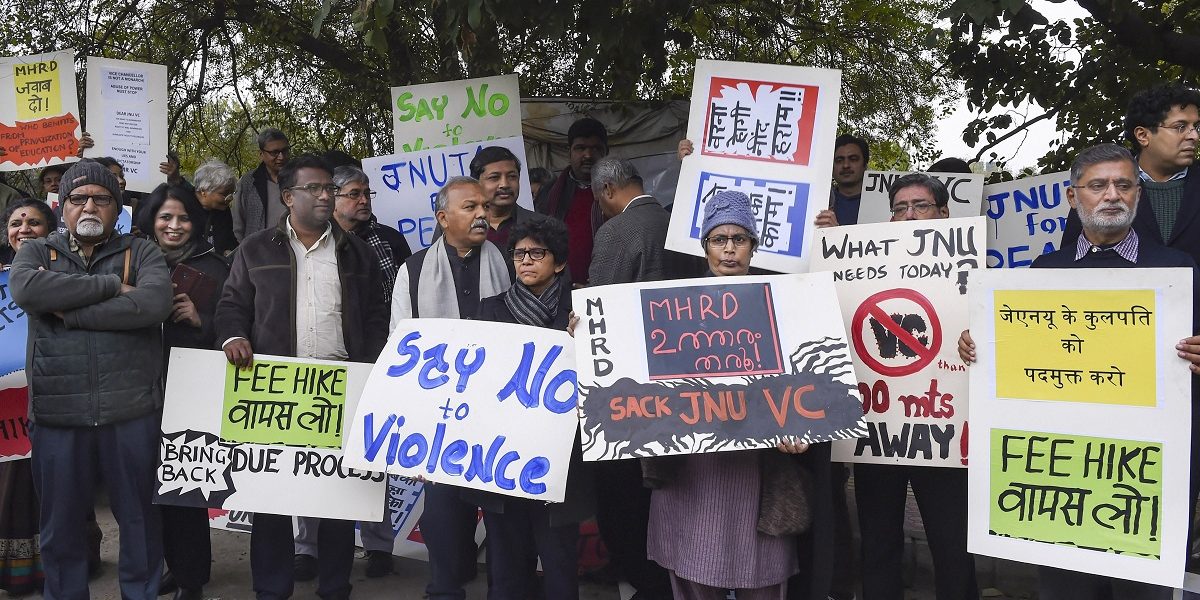 New Delhi: A fact-finding team’s report on the violence at the Jawaharlal Nehru University on January 5 identified the attack as “targeted” violence intended to intimidate and one that was done with the support and encouragement of the institution’s vice-chancellor.

The evidence collated by the inquiry committee revealed that the armed attackers were systematically mobilised inside and the campus by the security company (Cyclops P. Ltd) on duty. It also found active involvement of a few faculty members in facilitating the violence.

The report suggested the involvement of the rightwing in the attack. It said:

“There is every reason to believe that the mob that attacked the students and teachers on campus were from the right-wing factions. The WhatsApp groups like ‘Friends of RSS’ and ‘Unity against Left’ that were used to mobilise and provoke people to attack the students and faculty on campus speak volumes about the ideology of the people involved in the attack.”

It claimed that the attackers did not touch the students and faculty who were in support of the rightwing and aimed attacks on students of a particular religion.

The report alleged that the vice chancellor of the university, M. Jagadesh Kumar, was the “master mind” behind the incident.

“Since his appointment in 2016, he meticulously infiltrated the University with people in the faculty who did not merit their positions and promoted only those who would be compliant to him and had their inclination to right wing ideology. He deliberately imposed his decision on the university students and teachers without due process and then refused to engage with the duly elected students and teachers of the union which led to the deadlock,” reads the report.

Dev said that she attempted to speak to the VC several times but he didn’t agree to a talk.

The fact-finding team also found discrepancies in the version of the vice chancellor and the police regarding the time when the police was allowed to enter the campus.

The report raised some eyebrows on the disconnection of server and electricity on the campus on January 5. “There is no explanation why the server was down on January 5. It is almost as if the VC took advantage of the disconnection of the server to prevent a recording of CCTV footage to protect the attackers and go about their business without any record,” reads the report.

As per the report, the police stationed on the campus silently watched the attackers move around. Emergency calls to the police by the students went unanswered.

“The complicity of the Delhi police on January 5 clearly brings the Home Ministry into suspicion. The remarks by the Home Minister on the Citizenship Amendment Act-National Register of Citizens (CAA-NRC) agitations and punishing of ‘tukde tukde gang’ had also emboldened the perpetrators of violence in the JNU campus on January 5,” it added.

Recommendations of the Committee

The committee has recommended immediate dismissal of the VC and the setting up of an independent inquiry team to look at all appointments made from January 27, 2016 (date of Kumar’s appointment) till date and all other financial and administrative decisions taken during his tenure.

It demanded criminal investigation against Kumar, the company that provides security service on the campus, and the members of the faculty who conspired with the attackers to unleash the violence. It also sought to fix accountability of the Commissioner of Delhi Police and other police officials who didn’t promptly act on the emergency calls by the students and faculty members from the JNU campus on January 5.

Immediate rollback of the fee hike and recognition of Jawaharlal Nehru University Students’ Union (JNUSU) as an elected body was also demanded by the committee.