The ABVP, however, has said that three of its members were attacked by Left party students. 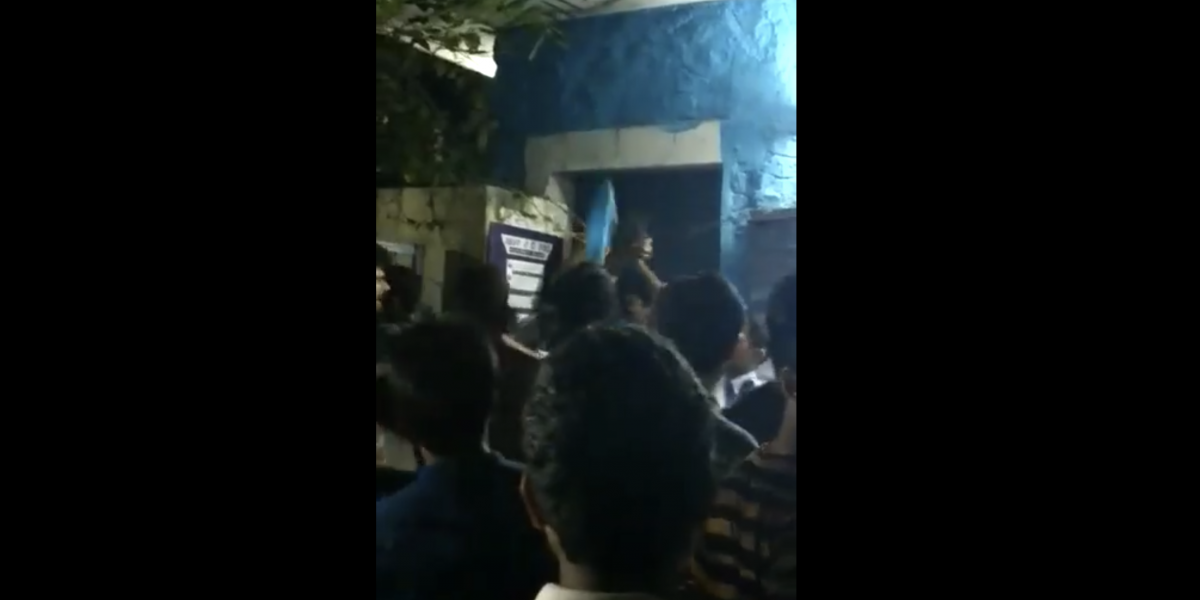 New Delhi: Students at Jawaharlal Nehru University have alleged that they were brutally beaten by members of the Akhil Bharatiya Vidyarthi Parishad, the students’ wing of the RSS, late on Sunday night. One student had to be taken to hospital and others are at the police station in Vasant Kunj, filing a police complaint.

The ABVP, however, has said that its members were the victims of the violence.

The violence occurred hours after the final results of the JNU Students’ Union election were announced, in which the Left Unity alliance won all four top positions.

In a video of the violence which started at about 2:30 am, people can be seen trying to hit one student, including by throwing bottles at him, while others try to protect him and are also hit in the process.

N. Sai Balaji, who was elected president of the Jawaharlal Nehru Students’ Union on Sunday, has said in a statement to the press:

Today ABVP students randomly attacked students.I was called to the scene at Sutlej [hostel]. As elected JNUSU President I went to ensure Pawan Meena’s [a Left student activist] safety who was attacked by ABVP students with sticks. Upon reaching what I saw was mayhem. The mob led by Saurabh Sharma [an ABVP leader] was baiting for blood of any student they thought a friend of Pawan Meena and were attacking students with sticks.

They openly threatened me, Geeta and other students present there with dire consequences if we intervened to stop the violence. The group now turned into a Mob and started attacking Abhinay a former JNU student in Jhelum and chased him and almost lynched him in the lawns. I ran with other students to save Abhinay who by then had fallen unconscious after the beating and took him to the ambulance and sent him for medical aid.

I was shocked and fearing my safety I asked the PCR to take me to Vasant kunj PS. My health deteriorated and I came back to my hostel to take medication. Now I will be going to PS to lodge the complaint.

Balaji has reiterated this sequence of events in his police complaint.

Harsh Vardhan, an AISA activist and JNU student who witnessed the violence, said Abhinay was bleeding from the mouth and had a swollen abdomen, because of which an ambulance was called. He was treated at Safdarjung Hospital.

Speaking to The Wire, Abhinay, a former JNUSU councillor, said that when he was being beaten up, he asked guards to put him inside the guard room but they refused. “They were telling me to run away, although there was no way to run away. I was able to run only 20-30 metres, they caught me and beat me up so badly that I was left unconscious. Then the guards put me in their jeep and later I was taken to Safdarjung Hospital.”

In videos of the violence taken by students on campus, some people can be seen stopping the police vehicle and demanding that Balaji be taken out of it.

According to Balaji, ABVP members including Sharma also followed him and other students to the police station and stood outside with lathis.

Students also alleged that they were manhandled and beaten when they tried to stop the violence and rescue the students being beaten. Geeta Kumari, former president of the JNUSU, said in a status on Facebook:

Today our comrades Pawan [Meena,] Kaushik [Raj,] Ashutosh [Kumar and] Abhinay were brutally beaten up by ABVP guys. It was a situation of mob lynching. When my friend Jyoti tried to take a video of it they also manhandled her. While I was trying to save Abhinay I was also attacked by Saurabh Sharma. He pulled my hand and threw [me] on the road at Jhelum [hostel] gate. And when they attacked N. Sai Balaji, I tried to stop them he threatened me that he would cut my neck off. Now I am at a friend’s place and safe. I am not in mental state to answer calls or talk. I have been taking this for an year now its just impossible to survive like this in the fear of getting beaten up or lynched in my own campus. I would file a complaint soon. But I cant really deal with this at this point of time.

Others have also alleged that the ABVP members used sexist and misogynistic language while attacking women students.

The ABVP, however, has alleged that three of its members were attacked by Left party students. “Just a while ago, three JNU students affiliated to ABVP were attacked by the criminals hiding as champions of Communist ideology. Around 15-20 Left workers, including non-students individuals, attacked in a targetted way. They were led by the outgoing JNUSU president Geeta Kumari and her close friend Ankit Singh. They entered Sujal Yadav’s room,punched him and hit him with sticks. The left party workers had already fractured his hand yesterday. He has been attacked for the second time in 30 hours,” Indian Express quoted Monika Chaudhary, ABVP national media convenor, as saying.

“The targeted violent attacks by the Left on ABVP students is a clear sign of an evil design unfolding in the campus. AISA-SFI and their allies have decided to turn things ugly in the JNU campus. Left wants turmoil in the campus… Left organisations are turning more and more aggressive and violent. In the present circumstances, the safety of the students, especially of those who are affiliated with ABVP, is in grave danger,” she said.

Ranjani Mazumdar, a professor in the School of Arts and Aesthetics, said that ABVP and RSS members had gathered outside the police station and were threatening to kill Balaji the moment he stepped out.

N. Sai Balaji’s police complaint by The Wire on Scribd

In a second complaint, Balaji has asked the Delhi police to provide protection to him and other students, and passage to a secure location, as he thinks there is a threat to his life. According to him, ABVP members Saurabh Sharma and Akhilesh Pathak told him, “Meet me outside the police station, we will finish you.”