The Message After JNU Attack Is Clear: No Space Is Safe

Every day, the ruling party's symbolism of violence is translated deeper into reality. 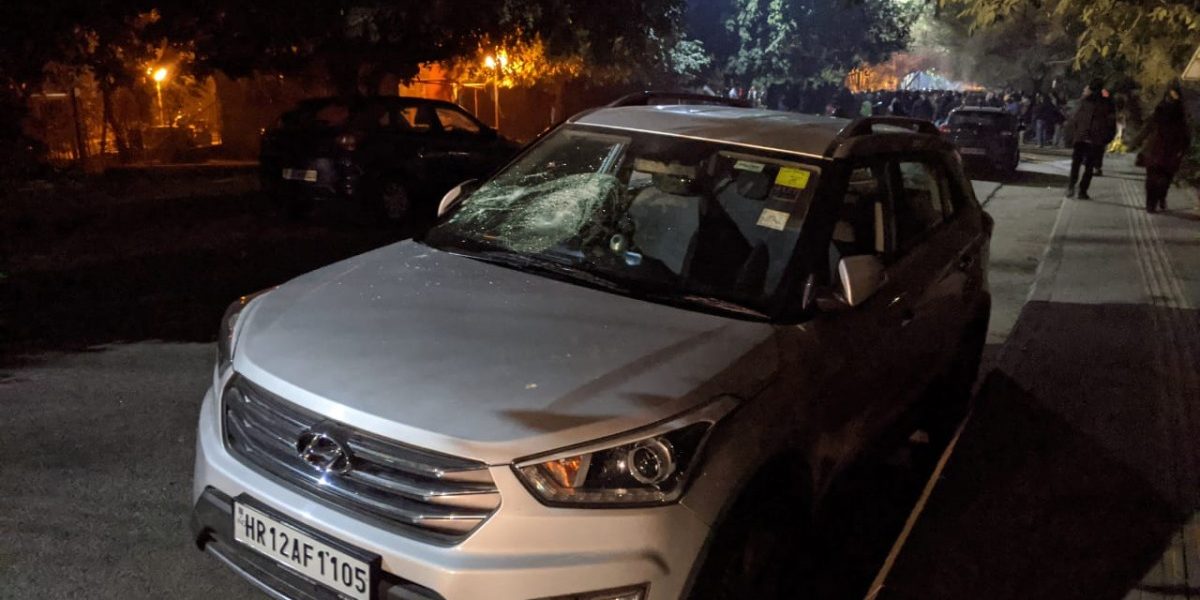 A car with its windscreen smashed inside JNU campus on Sunday night. Photo: Jahnavi Sen/The Wire

Does the government think that we are idiots? We learn that the minister of human resource development has issued an appeal to the students of Jawaharlal Nehru University to maintain peace, and that the home minister has sought a report from the police about the violence on campus. In Delhi, which is the seat of power, does goons running amuck, roaming around with sticks, rods and other weapons for more than three hours in a campus like JNU, highlight merely the lazy nature of the government or is it something else?

Mr Minister, it is not for the students to maintain peace, it is for you, your party and the affiliates of your party to eschew violence. They have been propagating violence against JNU for the last five years, and yesterday was only an enactment of those wishes.

The home minister asks for a report from his police, which stood idle while the armed thugs were on a rampage. This is the same police which ravaged the Jamia Millia Islamia campus, purportedly to stop violence. Why did it not intervene, one would ask, when before its eyes, goons were assaulting Yogendra Yadav? What was it waiting for?

Or were the orders clear? Break the JNU teachers’ association meeting, beat up teachers and students, terrorise them to the extent that they cower into submission. Send shocking images of violence to the outside world to establish the power of the ruling thugs. Send the message that no one is safe, no one will be spared, no one should think that there is sanctity to any space in India. That violence is the norm of governance and all the people have to do is to submit before this lawlessness.

The JNU administration is expected to report to the ministry. The same administration which has been overactive in disciplining the teaching and student community all the time, the administration that woke up after three hours of horror on campus.

We are expected to believe that all this happened without their knowledge, if not complicity? 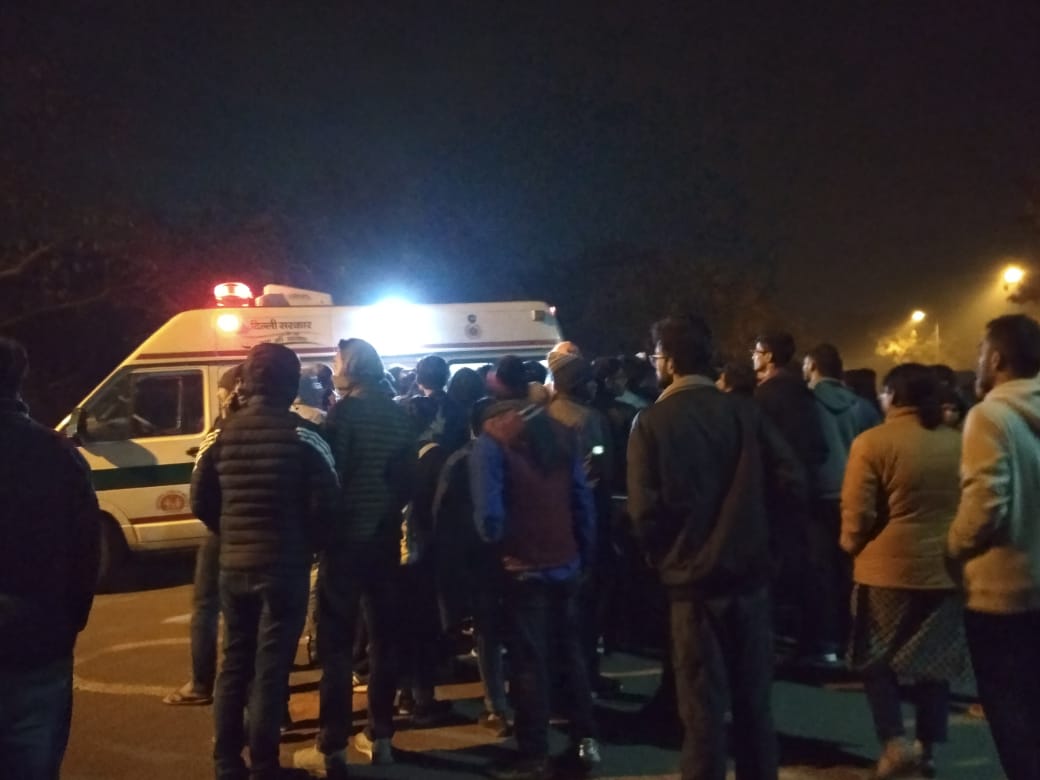 An ambulance inside JNU campus on Sunday night. Photo: The Wire

Who were these goons? We cannot say that they belonged to the students’ wing of the ruling party. But can we sense something from this eyewitness account, from a young woman who rushed to the JNU after learning about the violence there?

“Please note that whether it was only ABVP or also Bajrang Dal is unconfirmed. All I know is that I was asked if I support ABVP and upon hearing a neutral response, the mob supporters outside the campus got very hostile.”

She lives near JNU. This is what she reports,

“We live close to JNU. We received messages of violence facilitated by ABVP goons against students and professors. We decided to go to the university. The road leading to JNU was blocked by police who told us that students were protesting (a lie) and that’s why they can’t allow traffic on the road.

We managed to park our car elsewhere and walk to the the JNU gate which had 2 police buses and more than 50-70 police along with several people in plain clothes outside the university, instead of controlling the situation inside.

The police didn’t let us inside. When asked why they aren’t letting us inside, they said it’s not safe as there is a fight between students. When I told one of the cops that they should be intervening because videos have emerged of masked goons lathi charging and breaking university property, they simply shrugged.

Since I was asking several questions, one person standing there asked me if I support ABVP. I said I don’t support anyone. He then proudly replied “Andar lathiyon se pitaai ho rahi hai aur achha ho raha hai [They are being beaten with sticks inside, it’s good]”. He started bragging about how the teachers and students deserve this, in front of the police, and nobody said anything. Many more of such goons started circling my husband and me, saying “She’s on their side”, “She’s taking videos”, etc.

We felt extremely unsafe because if those people had done anything to us, the police wouldn’t have intervened. We started walking to our car, which was parked down the road. While we were walking to our car, we saw a large mob of at least 100-150 people with sticks, lathis etc. exiting the JNU campus. They simply walked towards the police and stood with them at the main gate.

None of them were arrested. None of them detained, despite carrying so many weapons. Complete state-sponsored violence. Horrible.”

Read this portion again carefully and draw your own conclusion, “Since I was asking several questions, one person standing there asked me if I support ABVP. I said I don’t support anyone. He then proudly replied “Andar lathiyon se pitaai ho rahi hai aur achha ho raha hai [They are being beaten with sticks inside, it’s good]”. He started bragging about how the teachers and students deserve this, in front of the police, and nobody said anything. Many more of such goons started circling my husband and me, saying “She’s on their side”, “She’s taking videos”, etc.”

Does it shock you that the alert and brave police could not apprehend even one from the gang? Were they given safe passage by the administration and the police? How could they melt into the darkness?

Will the police and the administration peddle the lie spread through the media that people from Jamia had caused the violence, or that it was a clash between two groups of students?

What happened at JNU on Sunday is a dangerous signal for our democracy. It is a JNU matter, and yet it should concern us all. We are being told that we are in a Goonda Raj, at their mercy. Was the signal not clear when no less than the home minister asked his friends and followers that they should shout the slogan of Bharat Mata so loudly that the ear drums of the government’s opponents are ruptured? The blood on the face of the Aishe Ghosh, president of the JNU students’ union, and Professor Sucharita Sen makes it clear that the symbolism of violence is translated into reality.

It is time to sit up, take note and decide our roles.