According to the police, the two women were identified on the basis of several videos that have gone viral in which they can be seen "questioning the authorities" on the killings of alleged militants in the region. 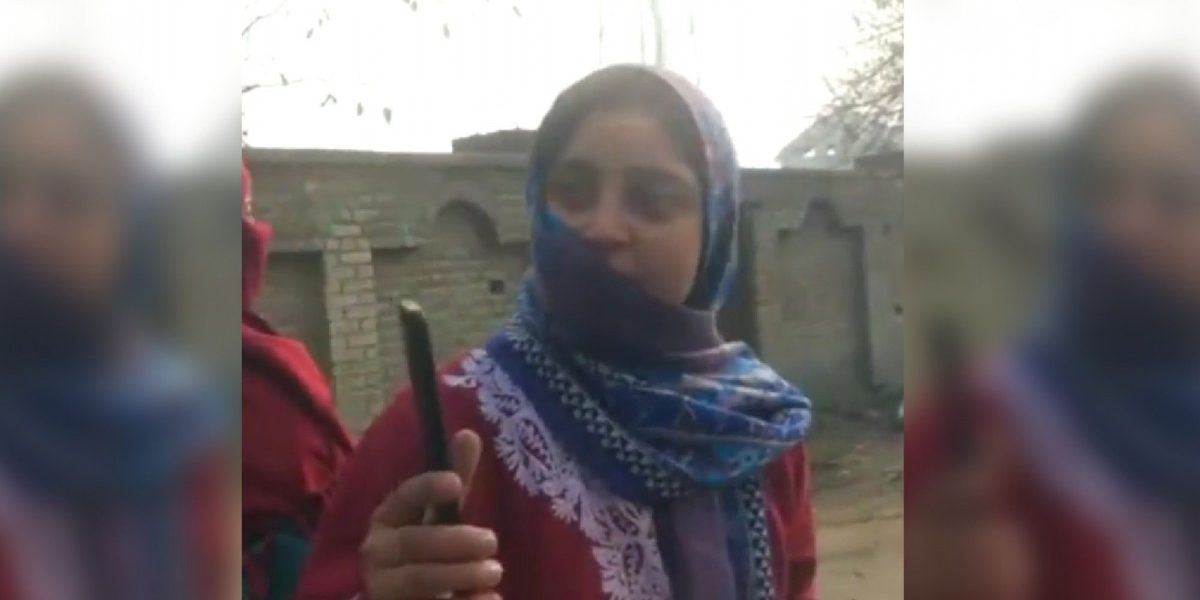 Video screengrab showing the daughter questioning authorities' claims that those slain in the encounter were militants. Photo: Twitter/@JKUTNEWS1

Srinagar: A woman and her young daughter were arrested by the Jammu and Kashmir police on Tuesday, December 14 for holding protests and raising “anti-national” slogans following a brief shootout in Srinagar on Monday in which two militants were killed.

The arrest of the duo has drawn condemnation from different quarters in the Kashmir Valley, with former chief minister Mehbooba Mufti accusing the authorities of pushing the people to a wall instead of reaching out to them. Mufti said that by arresting the women, the Kashmir administration had reached “a new low”.

Arresting women in Kashmir marks a new low for the administration that persecutes civilians only to please their masters in Delhi. The situation is getting worse & instead of reaching out to the people, GOI is pushing them to the wall. https://t.co/1wkGY82WZe

Peoples Conference chairman Sajad Gani Lone said arresting two ladies for merely protesting is highly condemnable. ” It is extremely suffocating to live in a place where the government’s sword is perpetually hanging over our heads, ” Lone said.

The women, identified as Afroza, wife of Ashiq Ahmad Sofi of the Wanabal locality of Rangreth in Srinagar and her daughter Ayesha were arrested for protesting in their locality on Monday and have been lodged at the women’s police station Rambagh.

The police’s version of the incident is that they had killed two Lashkar-e-Toiba militants in a chance encounter in Rangreth and that, as per their records, both the slain individuals had been involved in several terror crime cases and civilian atrocities and had even played a role in a number of recent killings in Srinagar city

Locals, however, told The Wire that they police arrived at their residence Tuesday morning to take them into custody. “Why should they be jailed for a mere emotional outburst? What is their crime? They are not militants or over-ground workers.  Such actions only lead to alienation and anger among the local population,” an elderly man, wishing not to be named, said.

He also said the government should take a lenient view in the matter and release them.

The two women have been booked under FIR number 209 lodged at the Saddar police station under Indian Penal Code’s sections 147 (punishment for rioting), 148 (rioting, armed with a deadly weapon), 149 (unlawful assembly, guilty of offence committed in prosecution of a common object) and 326 (voluntarily causing grievous hurt by dangerous weapons).

On Monday, after police claimed to have killed two militants after a brief gunfight in the area, the women came out of their homes and staged protests while young men of the area clashed with police.

In several videos, which have gone viral on social media, women can be seen shouting pro-freedom slogans and questioning police claims.

In one such video posted by Twitter handle ‘JKUTNEWS1′, Aisha can be seen telling reporters that innocent people are being killed in Kashmir and they won’t accept officials’ claims over such killings. “My brother is studying in  class 10. If he is killed tomorrow, would we accept that he is a militant?” she asked the reporters who rushed to the area after the shootout.

“Was Athar a militant? Even his body was not given to his family (for burial),” she reportedly said.

Sixteen-year-old Athar Mushtaq of Pulwama was killed in a controversial gunfight in Lawaypora, Srinagar in December 2020. He was buried in a remote graveyard in the Sonamarg area of central Kashmir’s Ganderbal district and his family is still waiting for his mortal remains to be returned.

In another video, 15-20 women can be seen shouting slogans like, “Hum kya chahte? Azadi…Chheen ke lenge – Azadi”. These are popular pro-freedom slogans and translate to, “What to we want? Freedom. We will snatch it – freedom.”

A police official said the two women were identified on the basis of these very videos.

“They have been arrested and further investigation is underway in this case,” the police official said, adding that they “tried to spread misinformation about the gunfight which created law and order problems.”

This is the second time when women have protested in Srinagar over “gunfights”, the first coming after the controversial Hyderpora shootout in November in which four persons were killed.

A group of women had staged protests on November 24 in the Rambagh area after the shootout, in which police claimed to have killed listed militants.

Some of the protesters had alleged that the militants were pulled out of the car and then killed, others said that they were denied medical aid.

In recent years, women in Kashmir have also booked under the Unlawful Activities Prevention Act (UAPA), 1967, a stringent anti-terror law.

In April this year, Saima Akhtar, a special police officer (SPO) was booked under the UAPA and disengaged from service after a video went viral in which she is seen shouting at forces for repeatedly searching her house.

The police booked her for “glorifying militancy and obstructing government officials on duty.”

In 2020, the mother of a militant who was killed in a gunfight with forces in south Kashmir two years ago was booked under the UAPA

Naseema Akhtar, a resident of Rampur in the Qaimoh area of Kulgam district, was arrested for “recruiting two militants” and “arranging arms and ammunition, communication and logistics” for them.