'Around 500 people can huddle in the community bunkers to save themselves. But our main concern is, how will we reach there in such a crisis?' 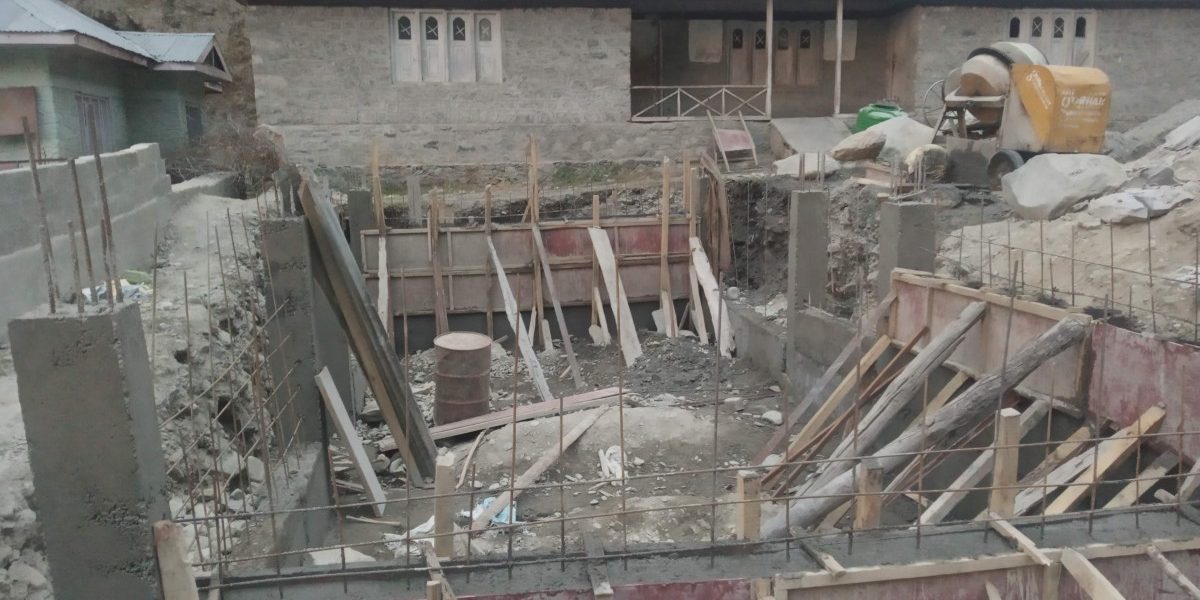 Keran Sector, LOC: From his house on the foothills of the highly volatile Keran Sector on the Line of Control (LOC), 45-year-old Hussain Lone carries his disabled brother on his shoulders to the bunker which they built in 2016.

A porter with the Indian Army, Hussain’s house was badly damaged during cross border shelling in 2016. Each time tension at the LOC in Jammu and Kashmir (J&K) escalates, Hussain, a resident of Madian village in Keran Sector has to cover a distance of 200 metres uphill to the bunker.

His objective is to save not one, but two lives.

Keran Sector is a block situated in Kupwara district of J&K, which often witnesses infiltration bids from Pakistan and cross border shelling. It is the last village on what is called the ‘zero line’. The block has around 4,500 voters and its population is 6,000.

Enclosed by tall deodar trees, mountains, barbed wires and Armymen at every nook and corner, Keran village is further separated by the natural border of the Sindh or ‘Kishan Ganga’ river, in Pakistan.

Also read: Changing the LAC Rules of Engagement With China Will Have Serious Consequences for India

Since the India-China clash at Galwan valley in Ladakh, the men and women at the Keran Sector have been living in fear. Not just Keran, even people in Karnah, Machil, Jummigund, Nawshera, and Budinambal of the border district Kupwara are anxious.

“God forbid, if a mortar shell fell in Keran, do you think anyone would survive? We are on the zero line at LOC. You can easily see the other side of Keran village across the Sindh river, which is the only border between India and Pakistan,” said Haji Hashmatullah.

In April this year, cross border shelling damaged 40 houses in Pathran village, around two kilometres from the LOC. Although there was no loss of life, people have been traumatised by this incident.

“We don’t even go to work. Look at what is happening in the Karnah, Machil and LOC area. We are at high risk. Army camps are at such strategic locations, that shelling will not affect them much. It is only civilians who will be killed. We have been demanding that the government provide us Rs 2 lakh each to construct individual bunkers,” said a local of Pathran village, requesting anonymity.

Notably, the J&K government’s Roads and Building Department has approved 20 community bunkers for Keran Sector. Among these, six bunkers have been sanctioned for Keran village, where 1,400 people live. A single bunker would cost Rs 9.35 lakh, with a dimension of 40 feet by 20 feet. It includes two rooms of (15×12) and a bathroom (6×6).

“Around 500 people can huddle in the community bunkers to save themselves. But our main concern is, how will we reach there in such a crisis? These community bunkers have been constructed at a distance of around 200 to 500 metres from the localities. The government should help us make bunkers near our homes. There are some villages where people have dug up bunkers near their homes,” said Shahnawaz Ahmad, a local.

Also read: A New Website Will Monitor Ceasefire Violations Along the India-Pakistan Border

“We are thankful to the government for constructing community bunkers. The ground reality is that whenever cross border shelling takes place, we find it difficult to even move out of our house, let alone reach the community bunkers at a distance,” said another Keran local Tasleem Ahmad Khan.

The sarpanch of Keran village, Bhat Anisa, said she took up this issue with Deputy Commissioner of Kupwara. “I requested DC Kupwara to construct individual bunkers instead of community bunkers. We are ready to bear the cost of bunkers too. But the DC informed that tenders had already been floated and work had been allotted. He assured us that he would take up this demand next time,” she said.

Interestingly, another village situated at LOC, Mandiyan A (Naga) which too has been highly affected because of cross border shelling does not even have a single bunker for villagers. This village has around 3,000 people.

According to government data, a total of 2,027 ceasefire violations took place on the border till June 14 this year in which four Indian Army soldiers were killed in the month of June alone.

Defence minister Rajnath Singh had said in parliament that more than 3,000 incidents of ceasefire violations took place in 2019.