J&K: How Closure of the Saakshar Bharat Scheme Has Left Thousands Jobless

The scheme, which focused on imparting literacy to adults, was shut without the employees being given any notice. 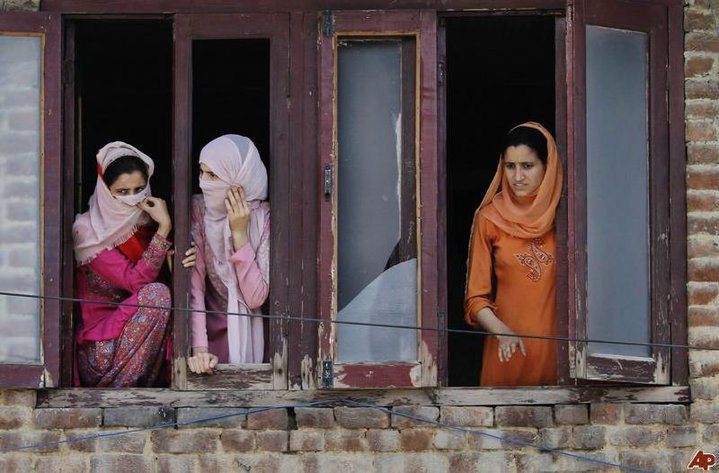 Most of the employees associated with Saakshar Bharat Mission have now reached their age limit to apply for government jobs. A photo of Kashmiri women looking at a rally in Srinagar. Credit: kashmirglobal/Flickr, CC BY 2.0

Srinagar: With high expectations, Yasmeena Jan, 38 from Tral area of south Kashmir started working under the Saakshar Bharat Mission (SBM) programme on a contract basis in 2012. Jan, who has a post-graduate degree in Kashmiri and a bachelor’s in education, was among the 5,000 highly qualified students from Jammu and Kashmir who were selected as educators.

Everyday, she would travel to different rural areas of Tral to identity and educate illiterate people, which was one of the basic criteria of that scheme. Her assignment was to teach people of different age groups in a government middle school in her village.

But she would never receive payment on time, and hence had to rely on her parents for travel and other expenses.

In 2016, she got married to a government employee. Before the marriage, Jan’s in-laws had asked her about her job and educational background. After being satisfied that she has a job in hand, they accepted her as their daughter-in-law.

The first few months of her marriage were good but soon, her in-laws’ behaviour became domineering. They forced her to stay at home, do household chores instead of spending time on a job which – according to them – was of no use. Her days would begin with their taunts and her husband’s “aggressive behaviour”.

“We would usually receive our payment after six months or so,” she said, “[and] even after that much of patience I didn’t achieve anything from that job. It made my husband annoyed and he doesn’t want to spend money on me or my child.”

Jan’s in-laws expect her to get her own monthly salary so that she doesn’t become a “burden” on them. According to Jan, her husband left her at her parents’ place during her entire pregnancy period.  “He was about to divorce me, but after a long struggle, my parents helped me settle the issue,” she sighed.

That did not end her problems; Jan says she doesn’t take any money from her husband and faces domestic violence from her in-laws every day.

She, however, doesn’t blame her “family” for the injustice that she if facing but holds the government responsible. She believes that the “selfishness” of the government has jeopardised her career and others who were employed under the scheme.

Launched in 2009 in all over the country, Saakshar Bharat is a Centrally-sponsored nationwide literacy scheme which is running in 26 states and Union Territories of the country. It focuses on imparting literacy to adults, especially women. This scheme provided a 50% reservation for female candidates from each panchayat halqa. It focused on people in rural areas who may have missed the opportunity to access or complete formal education.

In this scheme, the Centre acts as a facilitator and resource provider, but works closely with local communities to tailor the programme to their needs. In Jammu and Kashmir, the scheme was launched in 2012. At each panchayat level, one female and one male candidate were chosen from different villages all over the Valley.

Besides working for just Rs 2,000 a month for almost seven years, employees in Kashmir said they were made to cover vocational education, skill development, and applied science and sports. Over the past few years, employees like Jan have also been assigned various responsibilities such as working during the elections.

For the past seven years, these employees have been requesting the Jammu and Kashmir government to regularise their jobs. However, they say, their demand has not been met and they have been exploited.

The Wire spoke to almost a dozen employees of SBM, especially women. They said that more than 5,000 employees were told all of a sudden that the scheme had been wound up; some of their male colleagues are right now working as salesmen, some are working as hawkers and some have set poultry farms.

Another woman, Sabreena (38) from Pampore, said that the employees of SBM have been made “scapegoats”. “When we joined, we were asked to leave the other jobs we were pursuing. Some of us left better jobs and now we find ourselves helpless,” she said. “At times, I don’t have a single penny in my pocket. I ruined my career for this.”

Sabreena said that this time, most of the employees associated with the SBM have crossed the age limit to apply for government jobs. “We cannot apply for another government post,” she said.

Many female employees who got married during these years narrated distressing accounts of domestic violence from their in-laws. They said that their in-laws believe the women falsely claimed that they had job security and they were working women.

Sabreena told The Wire that one of her colleagues got divorced recently because of the same reason. These women, however, don’t want to speak on the record because of societal stigma.

Also read: Why Has the ‘Back to Village’ Programme Failed to Take-off in Kashmir?

The employees also spoke about the state’s crackdown when they were protesting their apathetic treatment. Employees said they were beaten up in protests by police in Srinagar.

Riyazul Haq, from Nowgam Srinagar, is one of the employees who was beaten up in a protest. “All these years, we have been asking about our rights and justice but no one is listening to us. Some of our sisters (female colleagues) are at the receiving end and are suffering badly,” he said.

These teachers have not been given an extension of contract or pay since March 31, 2018.

The employees claim that they were not given any notice or letter by the authorities that the scheme has been closed or that they have been disengaged from their services.

On confirming this, The Wire spoke to the state project director, Samagra Shiksha, Arun Kumar Manhas, who said that the SBM was closed two years back.

He stated that the people engaged in this scheme were not employed by the government. “The government chose them as motivators, not as contractual employees. The government had a target for the scheme, which was met. It didn’t have a plan to employ them permanently,” he said.