Unable to Speak in Hindi, Jharkhand Villagers Beaten up by CRPF on Suspicion of Supporting Maoists

Chaibasa police told The Wire that they have registered an FIR based on the villagers' complaints. But the villagers say they don't know of any FIRs. 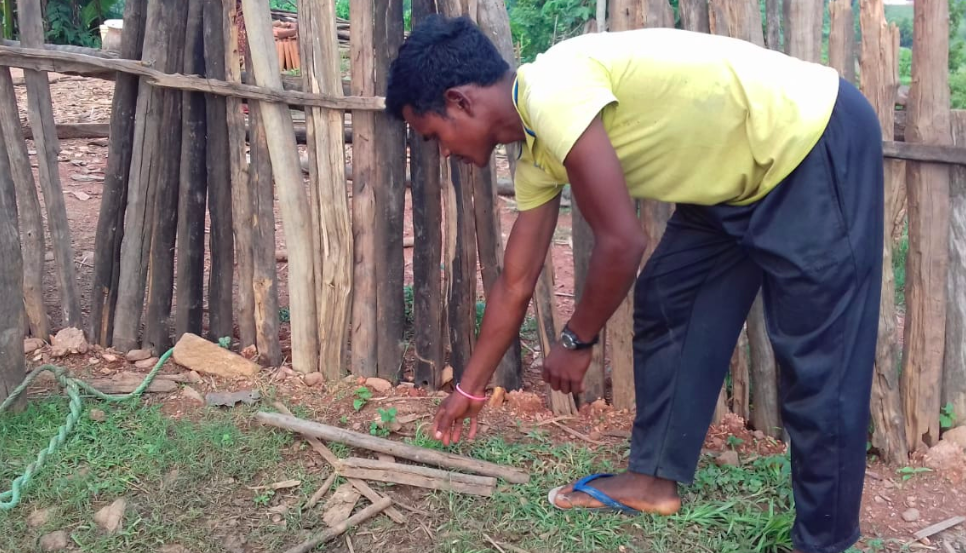 A villager points to the sticks the CRPF personnel allegedly used to beat them. Photo: Twitter/@JharkhandJanad1

New Delhi: Taking cognisance of the complaint filed by the Anjedbeda gram sabha in West Singhbhum (Chaibasa) district of Jharkhand, the local police has registered an FIR against unnamed CRPF personnel for beating up villagers.

On Thursday, the gram sabha in a letter to the Superintendent of Police (SP) had alleged that several members of the village were mercilessly beaten by CRPF personnel, who accused them of supporting Maoists.

Speaking to The Wire, Chaibasa SP Indrajeet Mahatha confirmed that an FIR has been registered on the basis of the statement of a villager injured in the incident and that investigation is going on.

Anjedbeda Gram Sabha has written to SP Chaibasa with details of the incident & demanded compensation and action against perpetrators. They clearly say that CRPF personnel mercilessly beat the villagers and looted land documents, Aadhaar and money from one of the victims. 1/n https://t.co/Jr96gkWtXa pic.twitter.com/NACAgf2wS2

The gram shabha in its letter had named seven villagers as victims of CRPF action. As per the letter, the incident occurred on Monday while Bonj Surin was working at his home and over a dozen of CRPF personnel landed at his house and started asking Surin where “the Naxals” were.

When Surin was not able to answer the question – he did not know the language the CRPF was speaking in – he was brutally beaten by the para-military, using sticks and the butt of guns. When other villagers tried to run away, they too were beaten mercilessly.

3/n Bonj Surin shows his trunk from which the CRPF personnel looted money. Also, a villager shows one of the “dandas” used by CRPF to beat the victims. They were beaten till the danda broke. Villagers yet to get a copy of the FIR, supposedly filed. @MahtabNama @kavita_krishnan pic.twitter.com/gNTTlcnO2Z

Yesterday noon, armed CRPF mercilessly beat 20 people of West Singhhum’s Anjebeda village. They were helping a neighbour repair his hut when the security forces came & started beating them. 7 have sustained serious injuries and one of them fractured a leg. @HemantSorenJMM 1/n pic.twitter.com/11BoATE9fk

As per a video released by Jharkhand Janadhikar Mahasabha, one of victims, a handicapped man named Guna Gope was also injured in the beating.

“He could not speak in Hindi when questioned by CRPF. They said that his deformed hand must be the result of a bullet injury and accused him of being a Naxal [Maoist]. When an elderly lady came to save him from the beating, she was kicked too,” the Mahasabha said in a tweet on Saturday.

4/n Physically handicapped Guna suffered serious injuries. He could not speak in Hindi when asked by CRPF. They said that his deformed hand must be a bullet injury & accused him of being a naxal. When an elderly lady came to save him from beating, she was kicked too. @samzsays pic.twitter.com/6EDjbU3Thy

According to a member of the Mahasabha, seven villagers were severely injured and two of them are still admitted in the district hospital, including Guna. However, the SP maintained that not all of them had been injured in the CRPF’s action. He also claimed that this was a highly sensitive area (with huge Maoist presence) and police have been receiving information about Maoists’ movement in the region and were compelled to carry out routine action.

“Confusion occurred when two villagers tried to flee and one got into argument when CRPF personnel tried to question him,” Mahatha told The Wire over phone from Chaibasa. “Whosoever is the culprit will be punished,” he added.

5/n Bamiya Surin says that he was held against the wall and beaten by rifle butts by CRPF personnel. Request @HemantSorenJMM to take cognizance of this severe violence inflicted by CRPF & ensure justice to the victims. @MVRaoIPS @RahulGandhi @SinghRPN @Dipankar_cpiml @manojkjhadu pic.twitter.com/58nmo97Hdq

The SP also claimed police are “investigating Naxal pamphlets recovered from some of the houses.” He, however, clarified that no formal police complaints have been filed in this regard and said that none of the villagers were Maoists.

“We have a very good relationship with the locals and we are not saying that they are Naxals [Maoists] or their supporters,” added Mahatha, claiming that Maoists “often use and highlight these incidents in their propaganda against police.”

Meanwhile, the villagers have refuted the allegation that there was any Maoist pamphlets or literature recovered from their houses. “We have not heard of anything like this having been recovered from any house here,” Pradhan Tamsoy, a villager told The Wire.

In fact, the villagers wrote in the letter that during the CRPF’s raid, para military personnel took away land documents, Aadhaar cards, farm animals and Rs 35,000, belonging to Ram Surin. According to Tamsoy, villagers are not aware that an FIR has been registered and what action has been taken against the culprits.

He also expressed shock and anger about the way the incident was reported by some of the local newspapers. Notably, two leading Hindi dailies, Prabhat Khabar and Hindustan, on Wednesday brought out reports saying that the villagers were beaten by Maoists instead of reporting that the CRPF had done the beating.

Interestingly, two other Hindi dailies, Dainik Jagran and Dainik Bhaskar, reported that the villagers have accused the CRPF and wardidhadhi (people in uniform) of beating them up.