Villagers of Dobo say that the disputed land in the village is under the Chota Nagpur Tenancy Act and thus cannot be purchased by non-tribal people. A court order has been flouted with the help of police, they allege. 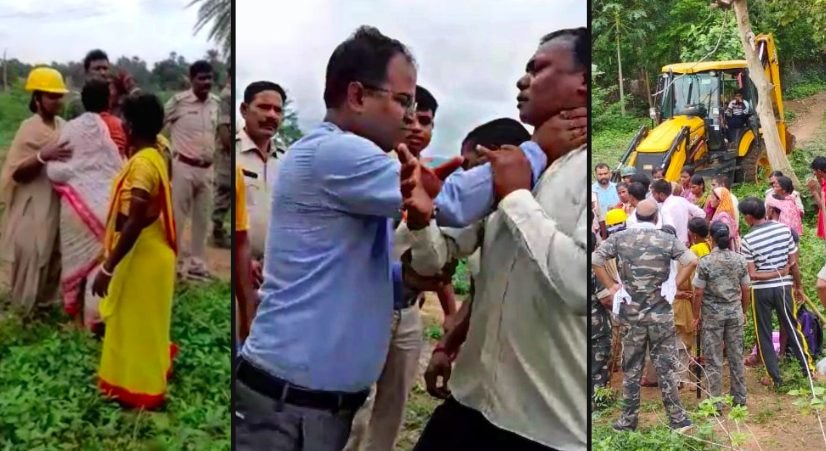 From left: Police talk to women protesters, Circle Officer Pranav Ambasht grabs one of the protesters, and villagers protest against government officials at Dobo village in Jharkhand. Photos: By arrangement.

Seraikela-Kharsawan (Jharkhand): Ever since a Jharkhand MLA laid claim to two acres of land on which around 15 tribal families live, police have allegedly beaten tribal villagers, maligned them and flouted directions by a local court with the goal of ensuring that they vacate the land, say locals.

The village of Dobo is in the Seraikela-Kharsawan district of Jharkhand. Villagers also say that the disputed land in the village is under the Chota Nagpur Tenancy Act and thus cannot be purchased by non-tribal people.

One of the major reasons behind Dobo village’s renown is its connection to popular leader Nirmal Mahato, the founder of the All Jharkhand Student Union (AJSU) and second president of the Jharkhand Mukti Morcha.

Controversy started in February this year when Sabita Mahato, MLA of the Ichagarh assembly constituency, got a two-acre plot demarcated by the Circle Office for the construction of a boundary. 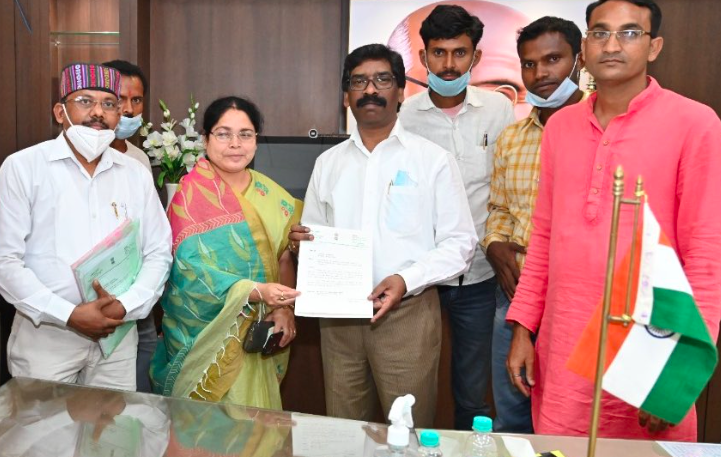 Officials, accompanied by a large posse of police, asked residents who had houses within the two-acre area to vacate the plot.

Locals protested and were then beaten up by police. A First Information Report was lodged against a dozen villagers and activists.

Residents living on the piece of land say that their ancestors were originally displaced by the construction of the Chandil Dam construction. Due to lack of planning, they say, mass leader Nirmal Mahato settled them in this village.

In February, the Samyukta Gram Sabha Manch, a social organisation that protects the interests of tribals and other locals, held a meeting and announced afterwards that they would move court to ensure families were not displaced a second time.

On July 18, Seraikela-Kharsawan Civil Judge Kavitanjali Toppo ordered status quo in this entire case after MLA Sabita Mahato allegedly could not produce any concrete papers to substantiate her claim on the land.

However, the very next day, on July 19, officials started constructing a boundary around the same plot. Around 150 police personnel were present there. When the villagers protested, citing the court order, Circle Officer Pranav Ambasht, Chandil SDO Ranjeet Lohra, along with other police personnel allegedly physically assaulted the villagers.

Villagers protest against government officials on July 19. Photo: By arrangement

The construction of the boundary continued without interruption from 10 am t0 7 pm. By then, 25 tribal villagers were detained by police.

A villager who was detained says he overheard a cop saying, “We do not have big lights or else the construction work of the boundary would go on overnight. We will come again tomorrow and complete unfinished work.”

However, as of July 23, the boundary remains incomplete.

Whose land is it, then?

Balram Mahato is one of those leading the residents’ protests. A resident of Dobo, he says that according to the 1964 settlement records, the plot number 1239 on which 15 families have built their houses belongs to Gurucharan Bhumij.

“The same land was somehow occupied by JMM leader and former minister Sudhir Mahato in 2009. After his death, the land was given to his widow, MLA Sabita Mahato. The cost of land in Dobo has increased manifold due to the construction of the Domuhani bridge over the Subarnarekha. This is why Sabita Mahato is ready to evict the poor families,” he adds.

Satyam, co-convenor of Jharkhand Jan Sangharsh Morcha, echoes Balram’s point on this bridge proving to be a game-changer.

“Ever since this bridge was built, the land of the surrounding areas has started touching the sky. This is the reason why Sabita Mahato has eyes on this piece of land. She has the help of Chandil SDO Ranjeet Lohra and some other government and non-government people executing corrupt practices,” Satyam says.

MLA Mahato did not take this correspondent’s call.

Local activists also point out that the government has plans to build another bridge near Dobo, which will further reduce the distance between the above two districts. There is also a plan to build a private university around the same bridge. Due to these reasons, the price of village land is expected to increase further.

Deepali Mahato, another local, says that it is not as if villagers are against MLA Sabita Mahato. “Nor are we against government officials and policemen. We have limited possessions and chief among them are the houses in which we have been living for the last three generations. If that too is taken away from us, where would we go?” she asks.

Mahato says that the court, which heard both sides’ arguments, had made it clear that construction on the boundary must stop and that villagers too could not touch it. However, construction work resumed the very next day.

“We are not formally educated but we know that whatever is happening is illegal. We are poor and this is why all of this is happening to us. Sabita Mahato is an MLA. It is her duty to serve us. Instead, she is terrorising us,” she adds.

On July 20, government officials unloaded a fresh supply of construction material on the disputed plot. Women villagers staged a protest in front of the District Collectors office. 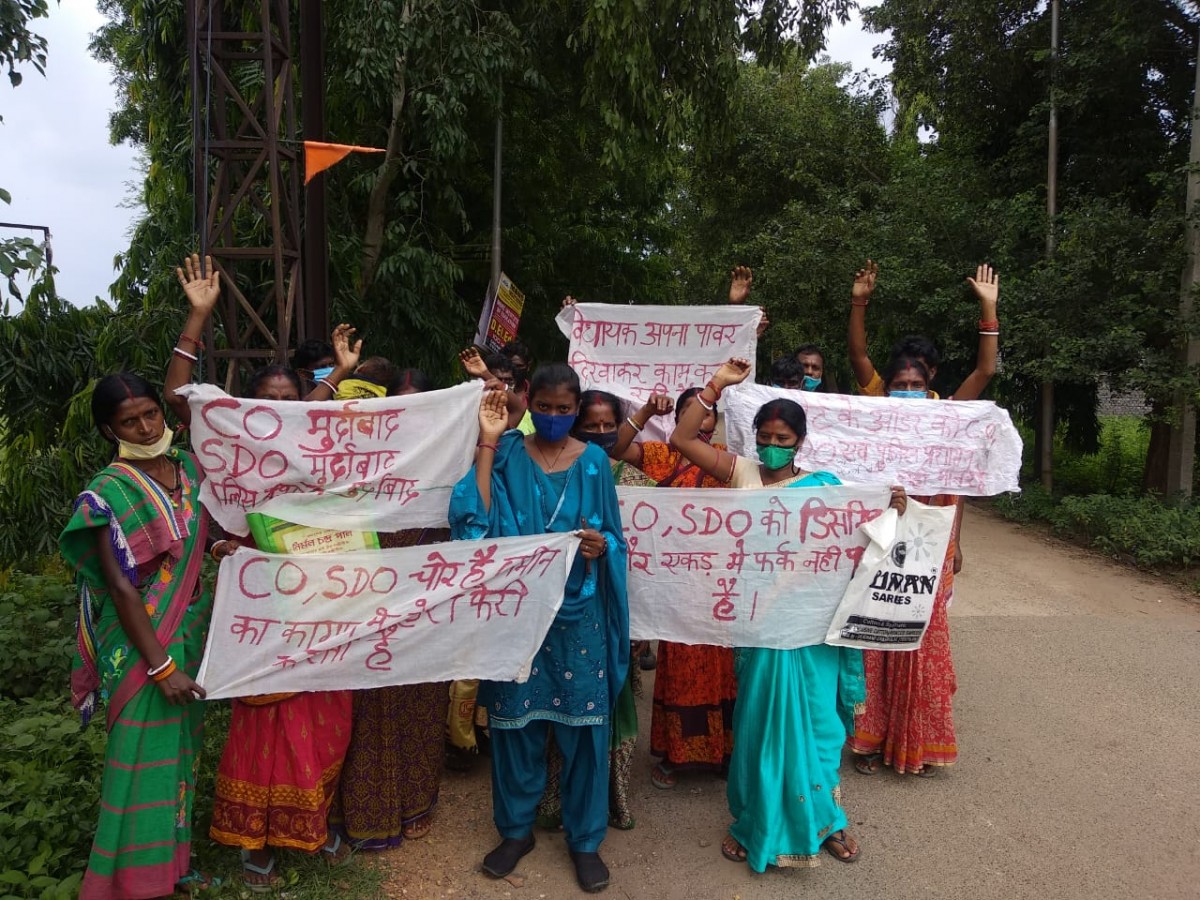 Women protest in front of the District Collector’s office in Jharkhand’s Dobo village. Photo: By arrangement

On July 21, SDO Ranjeet Lohra called a press conference. In it, he said that the disputed land belongs to the MLA.

“The disputed land belongs to Sabita Mahato. When we went to get the boundary made on the land, some villagers protested and a person [Balram Mahato] who has nothing to do with the matter clashed with the policemen in a drunken state,” he said.

Villagers deny that Balram Mahato was drunk. Several say that he is a resident of the village and can be counted upon to take up villagers’ issues.

On July 22, a fresh FIR was registered against three villagers, including Balram Mahato, one Manoj and an unidentified person.

Circle Officer Pranav Ambasht did not take this correspondent’s call.

The author is an independent journalist.