Notably, no violence and obstruction was reported during the protest. In fact, there is no mention of the same in the complaint. 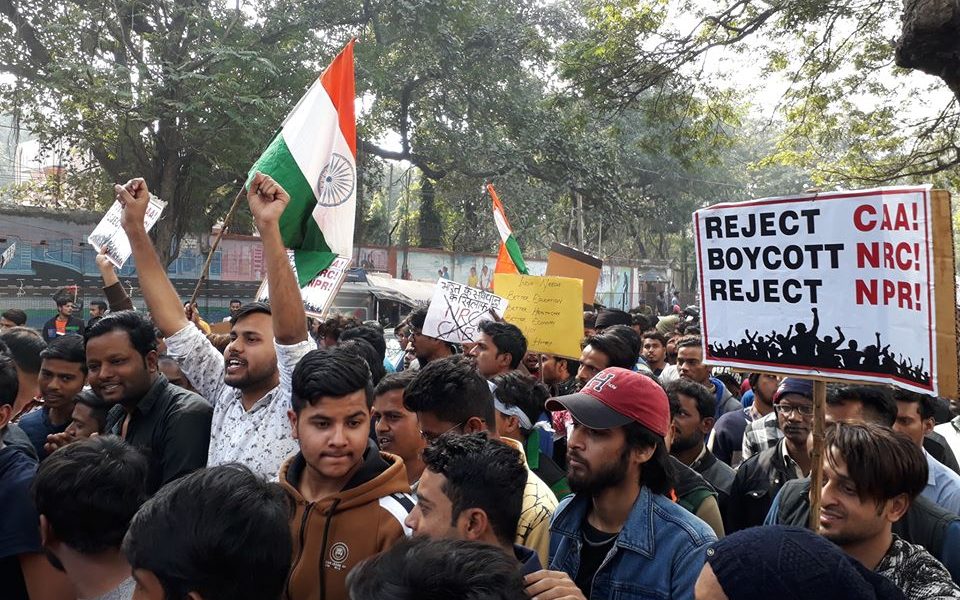 New Delhi: Dhanbad Police of Jharkhand registered a case against more than 3,000 people on Tuesday under various sections of the Indian Penal Code (IPC), including the law against sedition (124 A) for their involvement in a protest against the the contentious Citizenship (Amendment) Act and National Register of Citizens.

According to a copy of the FIR seen by The Wire, the protesters had been charged under sections 143, 145, 149 (sections related to unlawful assembly), 186, 188 (obstructing a public servant), 290, 291 (creating public nuisance), 336 (endangering life or personal safety of others), 153- A and 153-A (attempts to promote disharmony or feelings of enmity, hatred or ill-will between different reli­gious groups) and 124 A (sedition).

The FIR was registered on the basis a of complaint filed by the circle officer Prashant Kumar Laiq on Tuesday against thousands of protesters who allegedly blocked a road and raised inflammatory slogans. Based on the complaint, the local police registered an FIR against seven named and three thousand unnamed protesters for allegedly blocking traffic, creating chaos and shouting anti- government slogans, along with hurting religious sentiments and organising a protest without permission.

City superintendent of police R. Ramkumar confirmed that an FIR has indeed been filed against the protesters. Speaking to a news portal, Ramkumar said, “On the instructions of the district administration, a case has been registered under different sections, including treason.”

The news portal further reported that the police is investigating the case and making full efforts to identify the unknown by watching the video. However, no arrests have been made so far.

Notably, no violence and obstruction was reported during the protest. In fact, there is no mention of the same in the complaint.

While there is a mention of inflammatory slogans, it does not go into what those slogans were. Similarly, there is nothing written in the complaint as to what attracts a serious charge like sedition. There is only a mention that the protesters raised anti-government slogans.

Commenting on the case, high court lawyer and a resident of the city,  Shadab Ansari said there is no merit in the case. “The sections used in the FIR are not applicable,” Ansari told The Wire, adding he is planing to move an appropriate court to quash the FIR.

He also said that there was no need for permission to organise protests as it is the constitutional right of every citizen. “Moreover,” said Ansari, “as far as I know there was no imposition of 144 in the city. So, there is hardly any merit in the police case.”

According to a news report on The Telegraph, on Tuesday, more than 4,000, people, mostly from Wasseypur area of the city took out a march from Ara Mor amid heavy police deployment.

They raised slogans like “Na Hindu jalega, na Mussalman jalega, tum aag lagaoge to insaan jalega (Neither Hindus nor Muslims will burn, if you light a fire humanity will burn).”

As per the newspaper, the protesters held placards, banners and posters with slogans such as “Jahan paida hue hain wahin dafan bhi honge (Where I was born I will die there)”, “Divide karke chalate hain rajya kya? Logon ko pitne se thamti hai awaz kya? (Can one divide and govern? Can one beat people to gag voices?), “India needs better economy, better healthcare, not religious hatred”, and “Reject CAA”.

Meanwhile, reacting to the case, the Jharkhand Janadhikar Mahasabha, a group formed defend people’s rights and save democracy in Jharkhand, tweeted that the new “Hemant Soren administration needs to be clearly instructed to stop using sedition charge.” The group also noted that the governor Draupadi Murmu, addressing the newly elected Vidhan Sabha on January 7, said that the government was committed to protecting secularism and freedom of expression. On the same day, the administration slapped anti-CAA protesters with sedition charges.

3000 anti-CAA protesters in Dhanbad accused of sedition. @HemantSorenJMM, the admin needs to be clearly instructed to stop using sedition charge. Hope your govt, unlike the previous dispensation, will respect people’s freedom of expression and the right to dissent. @_SanjeevVerma pic.twitter.com/XIwasxqgMN

On Wednesday evening, as per Indian Express reporter Abhishek Angad, Jharkhand additional Chief Secretary (Home) Sukhdev Singh has said that the sedition charges will be removed. And Director General of Police (DGP) K.N. Choubey said, there was no element of sedition. Moreover, SSP Dhanbad has said that City SP has been directed to send a correction letter to the court removing IPC 124A.

Just in: Jharkhand Additional Chief Secy(Home) Sukhdev Singh: The sedition case will be removed. DGP KN Choubey: There was no element of sedition. SSP Dhanbad: City SP has been directed to send a correction letter to the court removing IPC 124A. @IndianExpress https://t.co/uHUwMAzn61

Later in the evening, however, chief minister Hemant Soren tweeted that the law is not for instilling fear in public and repress their voice but to create a sense of security among the general public. Sharing letters issued by city SP to the concerned police station to drop the sedition charge and inform the court accordingly, and seeking clarification from the SHO about why sedition charged was applied, the CM appealed to the general public to maintain law and order, recommended that the sedition charge be dropped immediately and action taken against the police officer concerned.

It can be recalled that during the Pathalgadi movement (which started in 2017), more than 170 people were charged under sedition in a total of 19 cases by the previous BJP government. The new government, which came to the power in December and is headed by Hemant Soren of JMM in its first cabinet meeting dropped all cases (including sedition) registered against people during the Pathalgadi movement in 2017-2018.

Note: The article was first published on January 8 and was updated with Jharkhand chief minister Hemant Soren’s reaction.