People that The Wire spoke to said that the quarantine centre in Dbuj not only lacked basic facilities but is also facing an acute shortage of food. 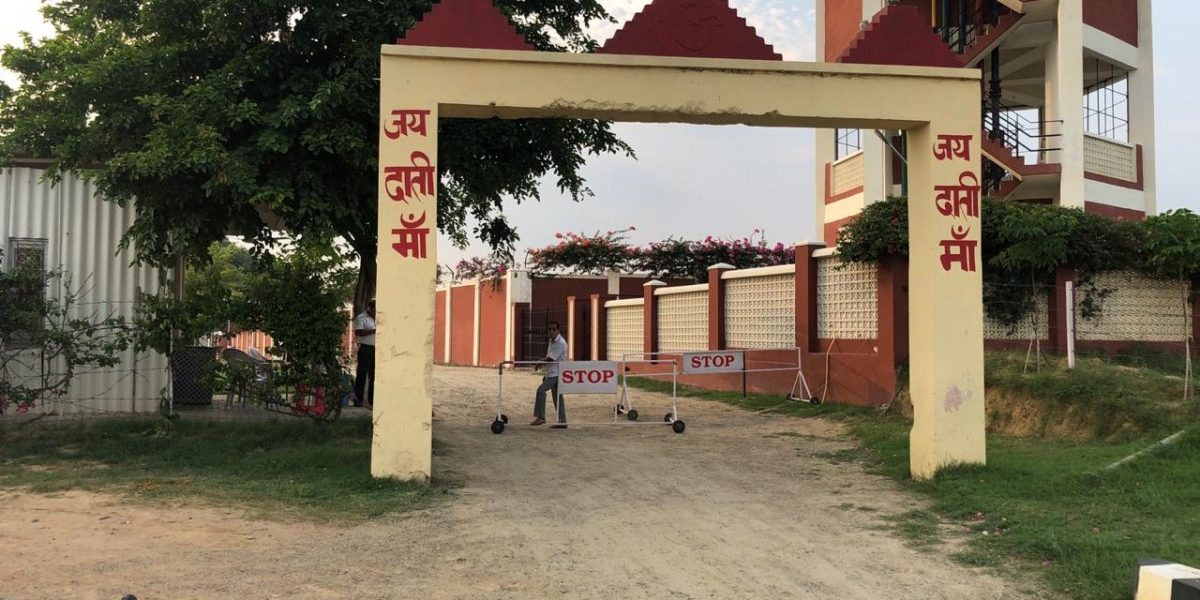 The back gate of the Thadikhui Quarantine centre in village Dbuj. Photo: Pallavi Sareen

Jammu: On Saturday, eight migrant workers who were quarantined at a centre in Samba district of Jammu and Kashmir slipped away through the back gate along with four children.

This is only the latest in a series of incidents where people housed at the Radhasoami Satsang Beas Ashram, now repurposed into a quarantine centre, have fled. Many who have slipped away have accused the administration of gross negligence and mismanagement, which they say forced them to leave centre even before their samples were collected.

Earlier, videos were posted on social media on July 9, showing people destroying property inside the quarantine centre and fighting among themselves. This was not the first incident of vandalism at the centre. One day previously, people had also destroyed some property, alleging that the centre lacked even basic facilities and accusing the administration of apathy.

Complaints about the centre began as far back as in May, with photographs posted on Twitter showing the lack of facilities.

DC Samba, Have Some Shame. No arrangements at all. Even animals are not treated like this. Social distancing is a Joke. Students are sleeping on plastic sheets & are given food in plastic bags & wre kept in a huge open ground with no facilities. Incompetent DC. @islahmufti pic.twitter.com/1ziCj6NcUA

A video report by Sushil Sharma of Straight Line shows people leaving the quarantine centre blaming the lack of basic facilities for their departure. They also accused the administration of negligence and mismanagement.

The SSP of Samba, Shakti Pathak, also admitted that the reports of vandalism were fuelled by people complaining of administrative issues such a delay in collecting samples. The inmates also complained about a shortage of food, the SSP said.

Residents of the village also told The Wire that so far, hundreds of migrant workers had left, but they did not know whether their samples had been collected. “We were surprised that the workers were leaving through the back gate of the ashram. Generally, when the tests are done, they are released through the front gate which faces the national highway,” said Gorakh Singh, a resident of Dbuj.

‘No food or water’

Ram Prasad, who left the quarantine along with his family, said, “Out of 2,000 people, food is distributed to only 700. The rest are left to fend for themselves. Roti, paani kuch bhi nahi de rahe hain, bas dande maar rhe hain. (They do not give us food or water, they just beat us with lathis).”

He said that he had been inside the quarantine centre for three days and while his name had been noted down, his sample was not collected. He claimed that his family was not given food on July 10 and 11. “Only a packet of biscuit was given to our children. They had developed rashes on their bodies from sleeping on the ground,” he said.

When asked if his family was the only one which left the centre unnoticed, he said, “More than 500 people have already left. Bhookhe maarenge toh log bhagenge hi (If people are left to starve, they will run away).”

However, SSP Pathak said this number is not accurate. “The number of registered persons can be used as the base to reveal how many people have ‘escaped’. The registration for quarantine is done at Lakhanpur, of which a few are forwarded to Samba. I have verified and found that only 17 people have escaped. All were traced out and booked along with their two facilitators,” he said.

The sevadaars of the ashram also corroborated the allegations, revealing that of the centre’s eight gates, only the front gate is manned by the police. This is one reason why people are able to slip away, they said.

A sevadaar, who wished to stay anonymous, expressed concerns about the state-of-affairs inside the quarantine centre. “When food is being served, there is no social distancing. If a single person inside the centre turns out to be a COVID-19 patient, you can be sure the others will also be infected,” the sevadaar said.

He also admitted that there was a shortage of food in the centre. “I brought some milk from my home for some of the children who were crying. We are sevadaars of this ashram. Our hearts melt when we see these people going hungry due to no fault of their own. The administration gives one puri and some achaar and that too only for people who are in the front of the queue. The rest have to go hungry.”

Pathak, the SSP of Samba, said the centre has not been walled completely, so it is not possible to cover the entire area surrounding the ashram to prevent people from leaving. “Even if we deploy an entire battalion, it wouldn’t be sufficient to cover the area,” he said.

On the allegation that some people had fled the quarantine centre, the SSP initially denied these claims but later said, “I am not saying that people haven’t run away. There has also been the issue of illegal entry of some people. We have lodged 2 FIRs in the matter.”

Reeshi, a man from Kishtwar, has been quarantined since June 25 along with his family. He reached out to The Wire over phone to speak about administrative apathy. “For the past three days, we have been waiting for the results of our sample. My wife has a slipped disc but she has to sleep on the floor with nothing but a bedsheet. The mattresses they have provided are very dirty.”

Regarding the matter of food shortage, he said, “We remain at a distance when they are serving food because anyone could get infected in a crowd. When the ashram was serving food, it was alright. Now the administration has taken over the job and maybe they want to siphon funds meant for serving food. We are surviving with the help of a few army men who get food.”

So far, the district has reported only 218 confirmed cases of the viral infection. Of these, just 81 are active cases. However, the situation may change if proper facilities are not provided at the centre, forcing more people to flee. This could result in a spike of infections in the villages surrounding the quarantine centre.

The Wire reached out to deputy commissioner Samba Rohit Khajuria for a comment but he couldn’t be reached. The story will be updated if or when he responds.