Hotel With a View Turns Prison in Besieged Kashmir

In a hotel-turned prison, on the banks of the lake Dal, relatives line up to meet the incarcerated politicians of Kashmir.

The cousin of a Congress politician jailed inside the Centaur Hotel writes an application to seek permission for meeting him. Photo: Mudasir Ahmad

Srinagar: Located on the banks of the renowned Dal Lake, Hotel Centaur is an ideal place to holiday in Kashmir during the scorching summer.

The mesmerising Zabarwan hills in the background add to the breathtaking ambience that leaves tourists in awe. In the foreground, the cool breeze emanating from the lake adds to the allure of the scene.

These days Centaur is witnessing an unusually heavy rush of people. The visitors, however, are not tourists, but relatives of Kashmiri politicians who remain detained inside the hotel for the 22nd straight day.

Earlier this week, after the government designated a senior official as the superintendent of the subsidiary jail and announced that relatives would be allowed to meet detained politicians, people have been lining up outside the Centaur to meet their family members.

From children as young as seven, to an aged mother desperate to see her son, to an avid political supporter – all patiently await their turn to go in.

Many of them have got the choicest gifts for their jailed kin – a box of freshly plucked apples, a carton of juice tins and packets of dry fruits. A political worker tries to slip in a packet of cigarettes for his leader, but is caught by security guards.

However, an elderly father who is carrying new clothes in a bag for his jailed son is allowed to take them in. “I am feeling choked and breathless. I want to see my son. That only will give me some peace,” says the grey-haired man as he walks past the main entrance of the hotel-turned-prison.

A senior police official says around 40 to 50 politicians, senior and junior, remain have been detained inside the hotel since August 5 when the central government stripped J&K of its special status – that gave the state a separate flag and constitution – and bifurcated the state into two Union Territories.

Sameer Ahmad, brother of jailed Congress leader Hilal Shah is among the first ones to reach the hotel Monday morning.

“He [Shah] is very ill, his bilirubin levels have gone high,” a worried-looking Ahmad says. “We have taken up the matter with the Congress high command and we are hopeful that my brother will be shifted to the hospital for treatment.”

Ahmad is accompanied by his cousin who has drafted an application, addressed to the jail’s superintendent, seeking permission to meet their relative.

Shah fought and lost the 2014 assembly election to PDP leader Mufti Muhammad Sayeed and after his demise, the Congress leader lost the 2016 by-election to Mehbooba Mufti. Shah’s brother has brought fruits and new clothes for his brother. 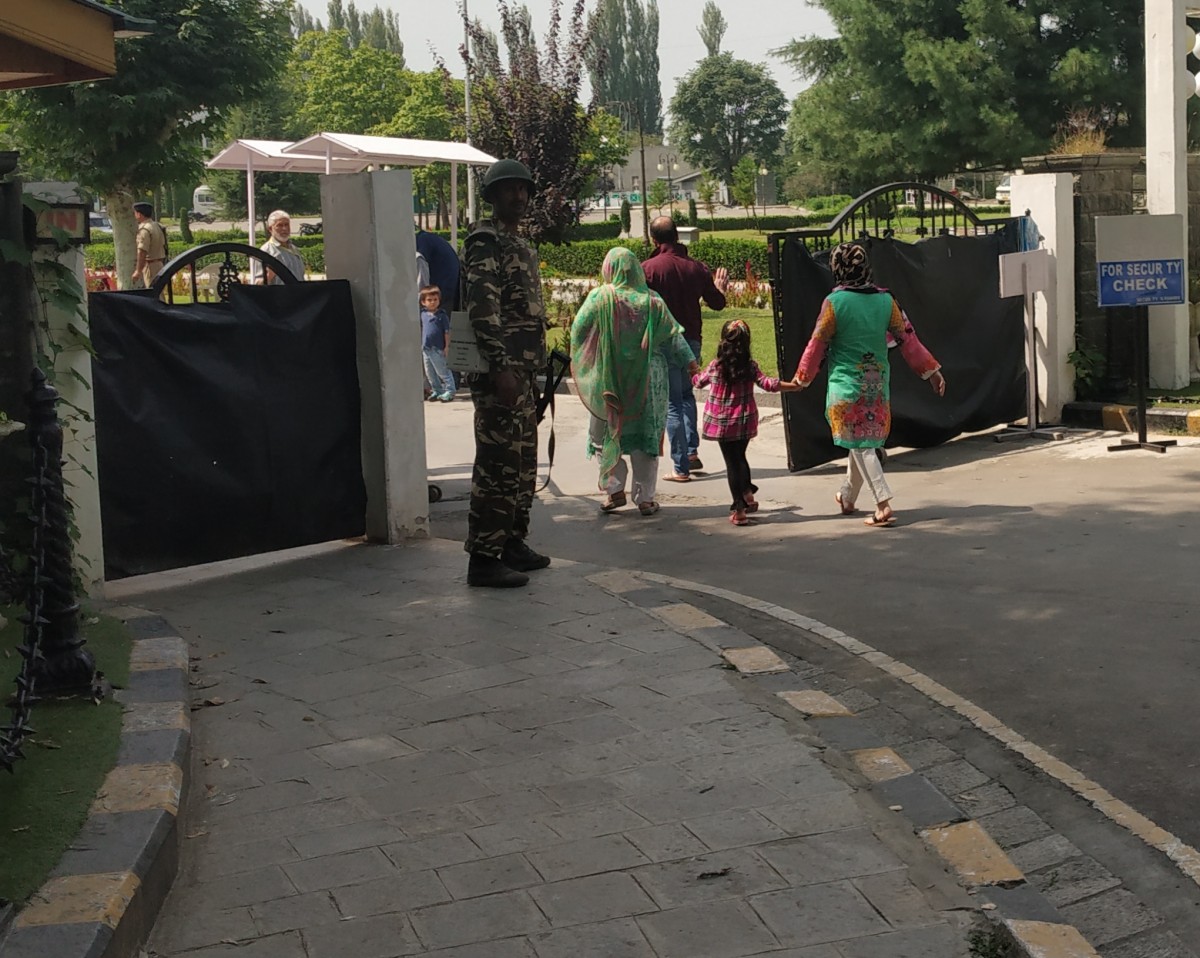 Family members of a politician walk into the Centaur Hotel, which has been turned into a detention centre, to meet their relative Photo: Mudasir Ahmad

With every passing hour, the rush of visitors keeps growing. In the afternoon, Peoples Conference Chairman Sajad Lone’s mother and his wife Asma Lone arrive in an SUV to meet the politician.

They are allowed in at around 1:40 pm. “He [Sajad] is the darling son of his mother. They are attached to each other,” says a person who waits for the duo outside, on the main road which circles the lake.

It was based on a petition filed in the high court last week by Lone’s sister Shabnum that the government has been directed to allow family members of jailed politicians to meet them.

The deputy Mayor’s sister and brother-in-law and their young child were among the visitors. The family is flying to London on Tuesday and wanted to see him before leaving the Valley, said the deputy Mayor’s father who accompanies them.

“Yei tchu zulum (this is tyranny),” says a woman, who comes out after meeting her relative. “Those who stood for India all these years and faced all kinds of threats and social sanctions have been caged for none of their faults.”

“How do you expect the situation to improve when you are even jailing those people who held your fort in the Valley all these years,” she says before leaving in a car, with relatives.

Also read: ‘This is Not the 1970s’: IAS Officer Quits in Anguish Over Kashmir ‘Emergency’

Fearing protests and anger against the decisions taken on August 5, the government has launched a massive crackdown in the Valley – arresting politicians, including three former J&K chief ministers, ex-ministers, political workers, traders, lawyers and scores of youth.

“Is jailing people a solution to the situation you [government of India] have created by snatching everything from us?” says a grey-bearded man, who didn’t wish to be named, whose relative, a former lawmaker, is also under arrest at the Centaur.

There is no word from the government either on the charges under which politicians and other people – who continue to remain incommunicado for the 22nd straight day – have been jailed or put under house arrest in the Valley.

While landline phones have been restored in some parts of the valley, internet and mobile services remain indefinitely suspended as of today as well.

On Saturday, the government said it had lifted restrictions from the areas falling under 69 police stations in Kashmir. Security personnel including paramilitary troops and J&K policemen continued to control key roads in the summer capital Srinagar and elsewhere. Barricades in the form of drop gates and circles of concertina wires are now a common sight on Srinagar roads.

“It is very difficult to reach here. Then, they make you wait here for long hours,” says the relative of another jailed politician, who had been eagerly awaiting a meeting.

He rushes to seek information from a young person who steps out from the hotel after meeting his jailed relative: “They [the jailed politicians] have no means to know what is happening in the outside world. They have no access to news or other forms of information. My relative told me that they feel choked inside, sitting idle all day,” says the young man in his mid-twenties.

As he leaves, another person, who had been stopped for frisking at the gate, says, “These politicians are doomed now. They never had a mass support in Kashmir, now they have been betrayed by the people whose cause they pleaded their entire life.”