It is not immediately clear whether agricultural land would fall within the ambit of the new order issued by the Union home ministry. 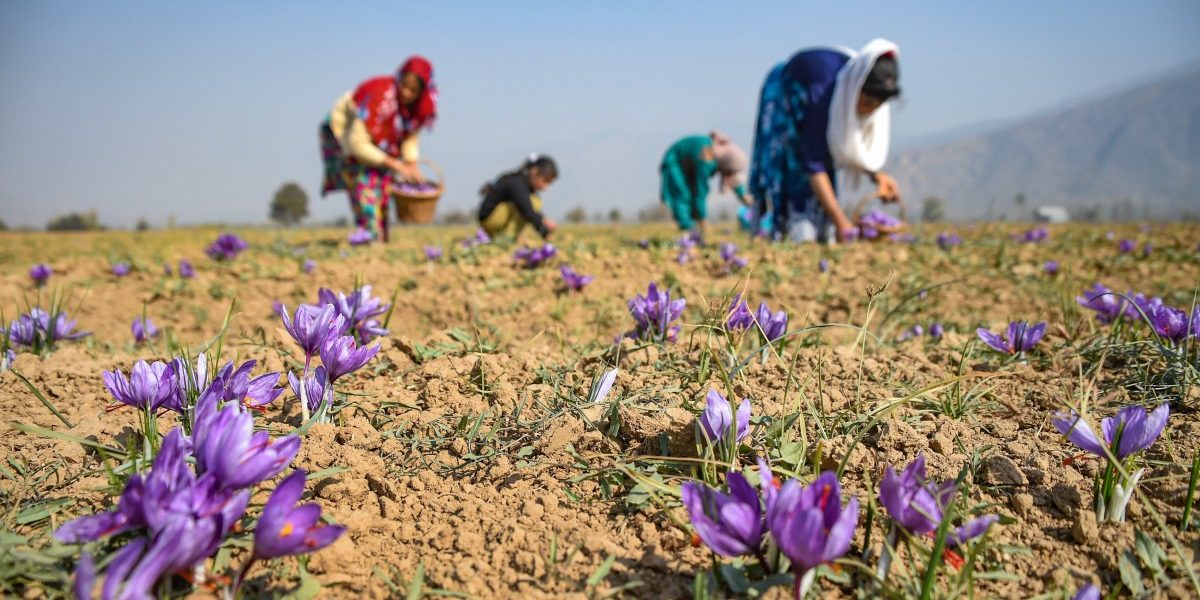 A family plucks saffron flowers from a field at Pampore in Pulwama district of south Kashmir, Tuesday, Oct. 27, 2020. Photo: PTI

Srinagar: Anyone from across India can now own land in Jammu and Kashmir, with the Centre in one of its most significant moves since the reading down of Article 370 last year issuing an order to affect changes in land ownership rights in the newly carved out union territory.

The move by the government of India comes a day after the BJP, which rules at the Centre, won the bitterly contested Ladakh Autonomous Hill Development Council (LAHDC) polls in Leh.

The Union Ministry of Home Affairs introduced the changes relating to the land laws through an order called the Union Territory of Jammu and Kashmir Reorganisation (Adaptation of Central Laws) Third Order, 2020, drawing a strong reaction from political parties.

Unacceptable amendments to the land ownership laws of J&K. Even the tokenism of domicile has been done away with when purchasing non-agricultural land & transfer of agricultural land has been made easier. J&K is now up for sale & the poorer small land holding owners will suffer.

Omar said the issuance of the amended land rules notification smacks of BJP’s “cheap politics and deceit.” “Interestingly the Center waited till the elections to LAHDC (in Ladakh) had concluded and the BJP had won a majority before putting Ladakh also up for sale. This is what Ladakhis got for trusting the assurances of the BJP,” he said.

There is uncertainty so far on whether these rules will also apply to Ladakh. “I don’t know what would be worse,” Omar said – that Ladakh too has been “betrayed” or that this treatment is reserved for J&K.

There’s much confusion about whether Ladakh has been included in the new land ownership order. I don’t know what would be worse: that Ladakh has also been betrayed by the Centre or that only J&K has been put up for sale, thus betraying the centre’s true intentions & bias

Under the Order, a number of amendments have been carried out in the Jammu and Kashmir Development Act to allow ‘outsiders’ to buy land.

Prior to the August 5 last year, when the government of India scrapped Articles 370 and 35A, only permanent residents of the erstwhile state of Jammu and Kashmir were eligible to own property including land in the region, and apply for jobs.

Earlier this year, the Centre scrapped the Permanent Resident Certificate (PRC) and replaced it with domicile certificate, allowing outsiders to apply for jobs in J&K. Under the Article 35A, the erstwhile J&K Legislative Assembly was empowered to define who permanent residents were and grant exclusive rights to them over land, property and jobs.

An official in the J&K revenue department said the latest Order does not make any mention about the need for domicile certificates for people to purchase land in J&K. While according to the official, outsiders can now have ownership rights on non-agricultural land in J&K, there is no clarity on whether they will be eligible to buy agricultural land too.

“Agricultural land can be bought by an agriculturalist only. But we don’t know whether the agriculturalist should be domiciled at Jammu and Kashmir or if he can be a resident of any part of the country,” said the official.

The new land laws have been introduced despite assurances by the Centre that it will protect the land rights of people of Jammu and Kashmir.

In March this year, Apni Party president Altaf Bukhari led a party delegation to meet Prime Minister Narendra Modi in New Delhi over the issue of the protection of land rights and jobs for locals.

Following the meeting, Bukhari had said, “The prime minister has assured us that the issues pertaining to domicile, land, and jobs will be addressed soon. Nobody will take away the lands and jobs of the people of Jammu and Kashmir. He also said that a law will be brought for this soon. The prime minister told me that they do not want to disempower the majority,” Bukhari had said.

Bukhari had also met the Union home minister during his visit. “I was assured that there is no question of a demographic change. No question of changing domicile or land rights.”

The Centre’s latest move has now renewed fears about the BJP’s purported plans to change the demography of Jammu and Kashmir.

Peoples Democratic Party chief Mehbooba Mufti tweeted that this was a new step in a nefarious design.

After failing on all fronts to provide roti & rozgar to people, BJP is creating such laws to whet the appetite of a gullible electorate. Such brazen measures reinforces the need of people of all three provinces of J&K to fight unitedly .

While introducing the changes in land laws, the Centre has also repealed several other laws. Some of them are:

The Peoples Alliance for Gupkar Declaration, a coalition group of several political parties which has vowed to fight for the restoration of J&K’s special status, termed the MHA order as a “huge betrayal” of the people of Jammu and Kashmir.

“This is a massive assault on rights of people of Jammu, Kashmir and Ladakh and is grossly unconstitutional,” said alliance spokesperson and Peoples Conference chairman, Sajad Lone.

He said the order made in the exercise of the powers under the J&K Reorganisation Act, 2019 was yet another “brazen violation” of the principle of constitutional proprietary of fundamental importance to constitutional democracy.

“The unconstitutional measure is clearly designed as an attempt to preempt the outcome of the challenge before the Supreme Court. The assault on exclusive property rights apart, changes in urban development laws and the creation of security zones is bound to prejudicially affect the environment and ecosystem in environmentally fragile regions of Jammu, Kashmir and Ladakh,” Lone said.