'He Was Killed in a Staged Encounter': Kashmiri Family Rejects Police Version After Son's Death

Imran Qayoom's family believes he had nothing to do with the militancy. The police, however, claim he was a militant and have buried his body in a far-off graveyard. 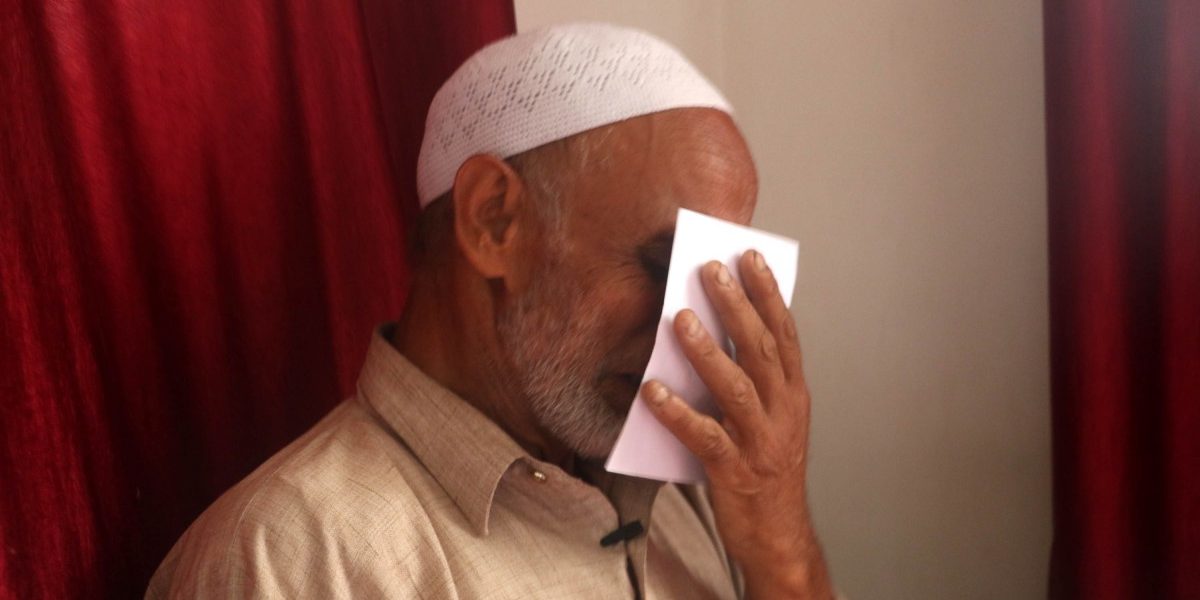 Imran's father kissing the picture of his son while tears fall from his eyes. Photo: Muneeb-ul-Islam

Imran, a marketing executive with a leading electrical appliance manufacturing company, had an argument with his father a day ahead of Eid on July 20.

Imran’s brother, Zahid Qayoom, a postgraduate management student, was at home when the argument broke out. “The family was planning to find a suitable match for him and we were pressurising him to give up his bad habits completely,” said Zahid, revealing that his brother was a victim of drug abuse.

Police sources said Imran was undergoing treatment for heroin abuse. He has also been named in two FIRs filed under the Narcotic Drugs and Psychotropic Substances Act.

Sources said he was treated first at a drug de-addiction centre in Srinagar and was then undergoing  rehab at a government-run psychiatry hospital there.

On Sunday morning, an official called Abdul and asked him to report to the local police station along with his son. Abdul, who works as a driver in the J&K government’s SRTC department, thought his son was again involved in a drugs-related case.

“I told the official to arrest Imran and put him behind bars,” said Abdul, adding that he was away on duty in Kund village when he got the call.

When Abdul returned home in the afternoon, his phone buzzed again. On the other side was a male voice claiming to be a police official, who asked him to come over to a police post in Anantnag and identify his son’s dead body. 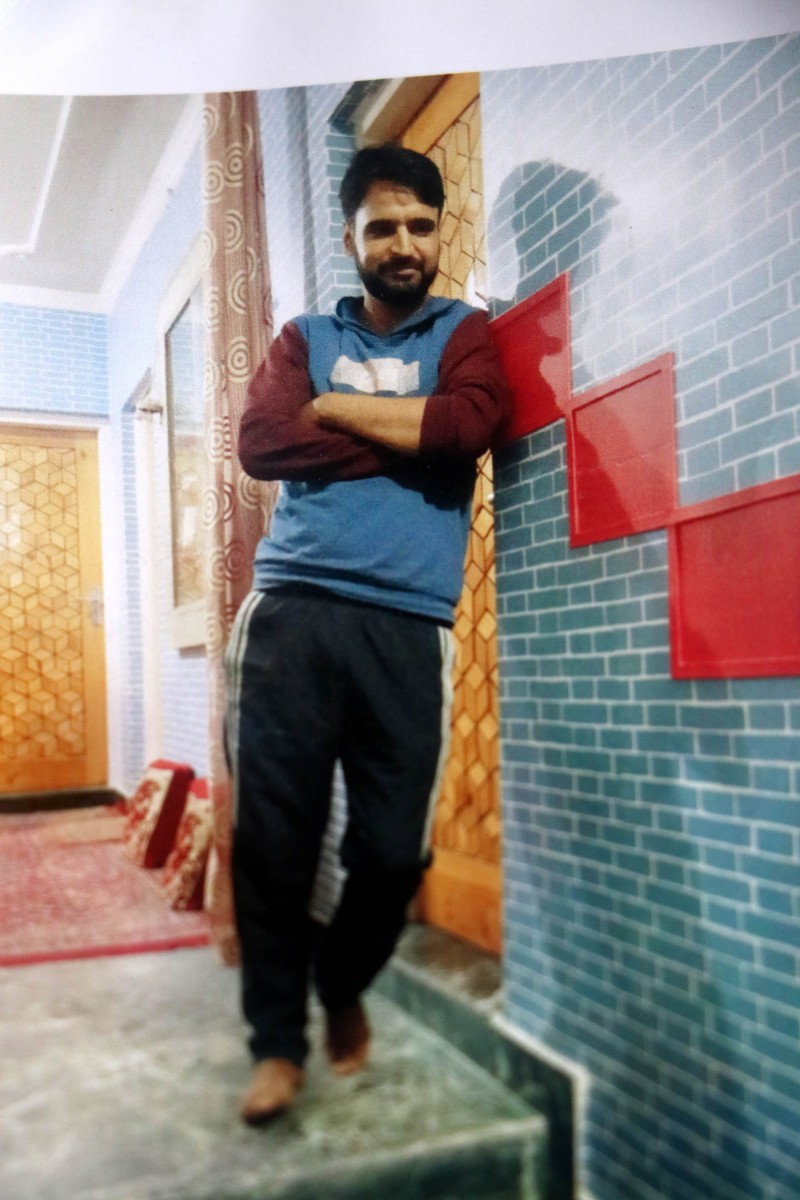 “I felt that the police were playing a prank so that we would show up,” said Zahid, Imran’s younger brother, adding that his father complied and took Abdul Rashid Dar, the sarpanch of the area, along with him.

At the police post, a policeman showed them a photo of a dead body. Although the young man in the photo was wearing the same blue shirt that Imran had dressed himself in on the day that he left home, Abdul couldn’t recognise his son.

In a statement, the J&K Police later claimed to have gunned down an unidentified militant in Kulgam district, adjoining Botengoo, where Imran is from.

In the statement, the J&K Police said: “Based on specific input about the presence of terrorist in village Sursano Kulgam, a cordon and search operation was launched by Kulgam Police and 34 RR.”

“During the search operation, the terrorists hiding in the orchids started firing indiscriminately upon the security forces, which was retaliated leading to an encounter,” the statement circulated by police through a messaging app said.

“In the ensuing encounter, one terrorist was killed whose identity is yet to be ascertained. Incriminating materials including arms and ammunition were recovered from the dead body. All the recovered material has been taken into case records for further investigation and to probe their complicity in other terror crimes,” the statement added.

Though a case (FIR No. 46/2021) has been registered, the identity of the militant has so far not been revealed officially. The daily bulletin issued by J&K Police on its official website doesn’t even mention the encounter.

While Imran’s family is still in the dark, they reject the police’s claims.

“If my son was a militant, why was he allowed to roam around freely? He even celebrated Eid with us and distributed the mutton of the sacrificial sheep,” said Abdul, unable to hold back tears.

“He was killed in a staged encounter. They should now at least return his body so that we can perform his last rites,” Dar added.

While police sources said Imran was missing from his home, his family claims that he had been staying with either his cousins or friends after running away from home. Two of Imran’s uncles live in their neighbourhood in Botengoo village.

“He spent a couple of nights at our place. He used to hang out with his friends and often spent nights with them. During the time after he ran away from home, he was seen every single day by his father, brother or cousins,” his uncle claimed.

According to the family, there is no record of Imran in the police books other than the two cases under NDPS Act. Imran’s medical record, accessed by The Wire, shows improvement in his heroin withdrawal symptoms since last year. He had last visited the hospital in February. 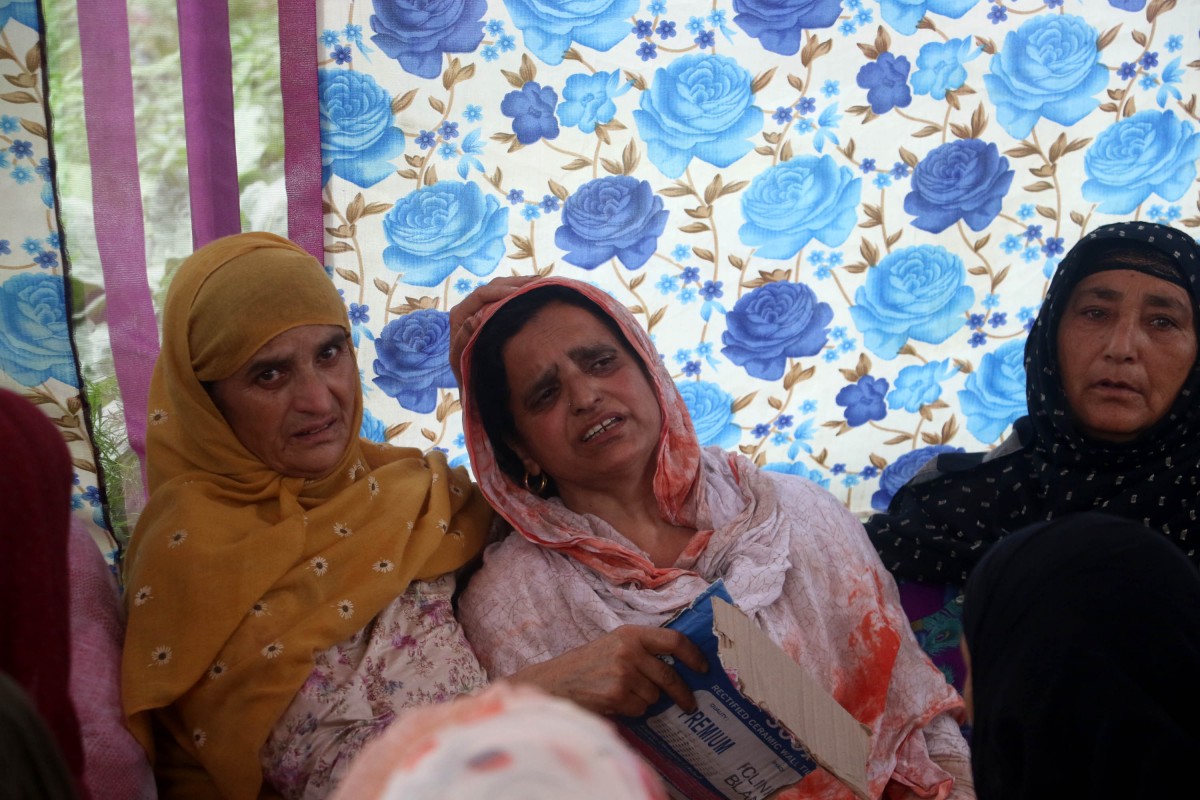 Zahid, Imran’s younger brother, said the photo seen by the family showed the body had a bullet mark near the chest area.

“We spent at least three hours searching for the body at different police stations where policemen kept referring us. We finally arrived in Srinagar PCR at around 5:30 pm where we were told that the burial had taken place in Handwara,” said Zahid.

“They have killed my brother and now they don’t want us to even pray at his grave,” he added.

These militants are, instead, buried in graveyards far away from their homes, although a small number of family members are allowed to perform their last rites.

But in case of Imran, the family wasn’t even allowed to see his face or perform his last rites.

“He was not a militant. He had found a job only three months ago. I still doubt that the body in the photo was that of my brother. I feel he is alive,” said Zahid.

The family has written to the J&K administration to order a probe into the killing.

“I request your goodself kindly look into the matter personally and help the family to retrieve his dead body and an FIR should be lodged to investigate the matter properly so that justice is delivered as we are a law-abiding family,” Imran’s father wrote in a letter to deputy commissioner, Anantnag Piyush Singla.

The letter has also been marked to J&K’s lieutenant governor Manoj Sinha and other senior officers of civil and police administration. Singla said the administration is “looking into the matter”. 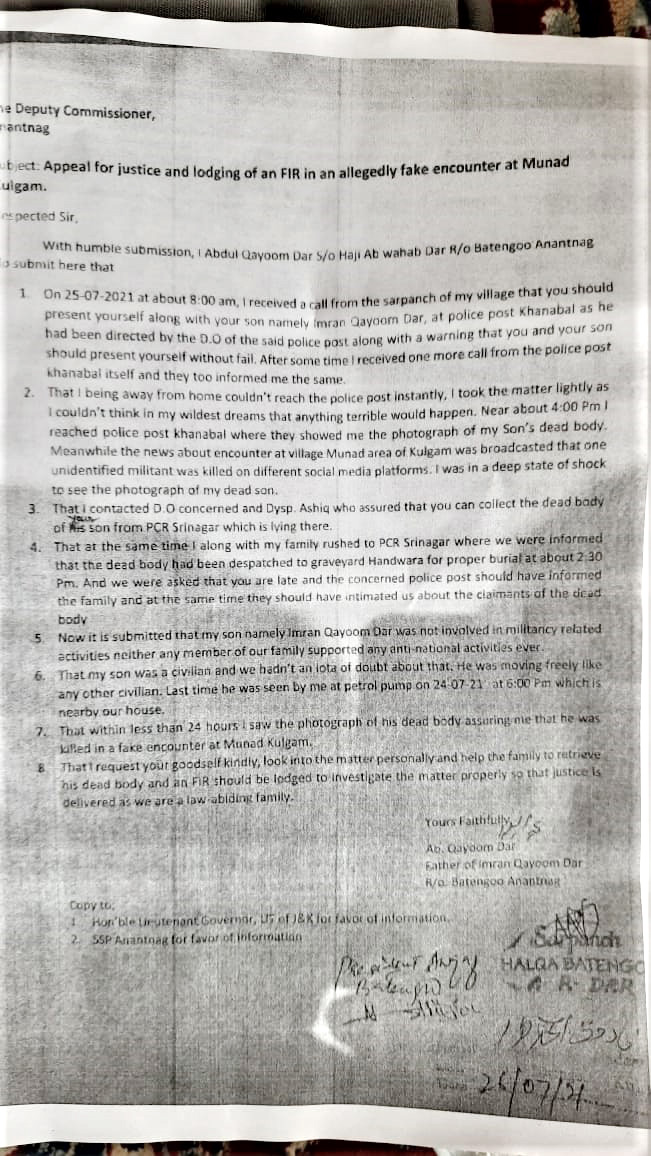 The letter to the deputy commissioner. Photo: Muneeb-ul-Islam

“If the probe finds out that he was a militant, then we have no right to claim his body. But we know that he was innocent,” Imran’s sister, Ambreen Qayoom, a lawyer, said. “They have killed him in an encounter and now we can’t bring him back. But they should at least return his body. It is our fundamental right.”

This is not the first time that the family of a Kashmiri youngster, who is accused of being involved in the militancy by security agencies, has contested the official claims.

On June 30, 17-year-old Zakir Bashir was killed when a gunfight broke out in Chimmer village of Kulgam district. While police had claimed that Zakir was involved in militancy, his family had disputed the claims.

“He was beaten up badly after being dragged out of home and when they (security forces) felt that he was going to die, they slit his throat and shot him,” Farooq Ahmad Bhat, a relative of Zakir’s, told a local news portal.

In December, 20-year-old Aijaz Maqbool, was killed in an encounter on the outskirts of Srinagar. While police claimed that he was a militant, his father, Maqbool Ganie, who works in the J&K Police, told the media that he was planning to take admission in a post-graduate course in Punjab University next year.

“They killed my son in a fake encounter? Why didn’t they kill me instead?” Ganaie, who has reserved a grave for his son at their ancestral graveyard in south Kashmir, said.

Earlier in July last year, three labourers from Rajouri in Jammu, who went missing in Shopian district, were found to have been killed in a staged encounter by the Army. Although the police had launched an investigation, it was stonewalled due to procedural issues involved in carrying out criminal proceedings against the armed forces.